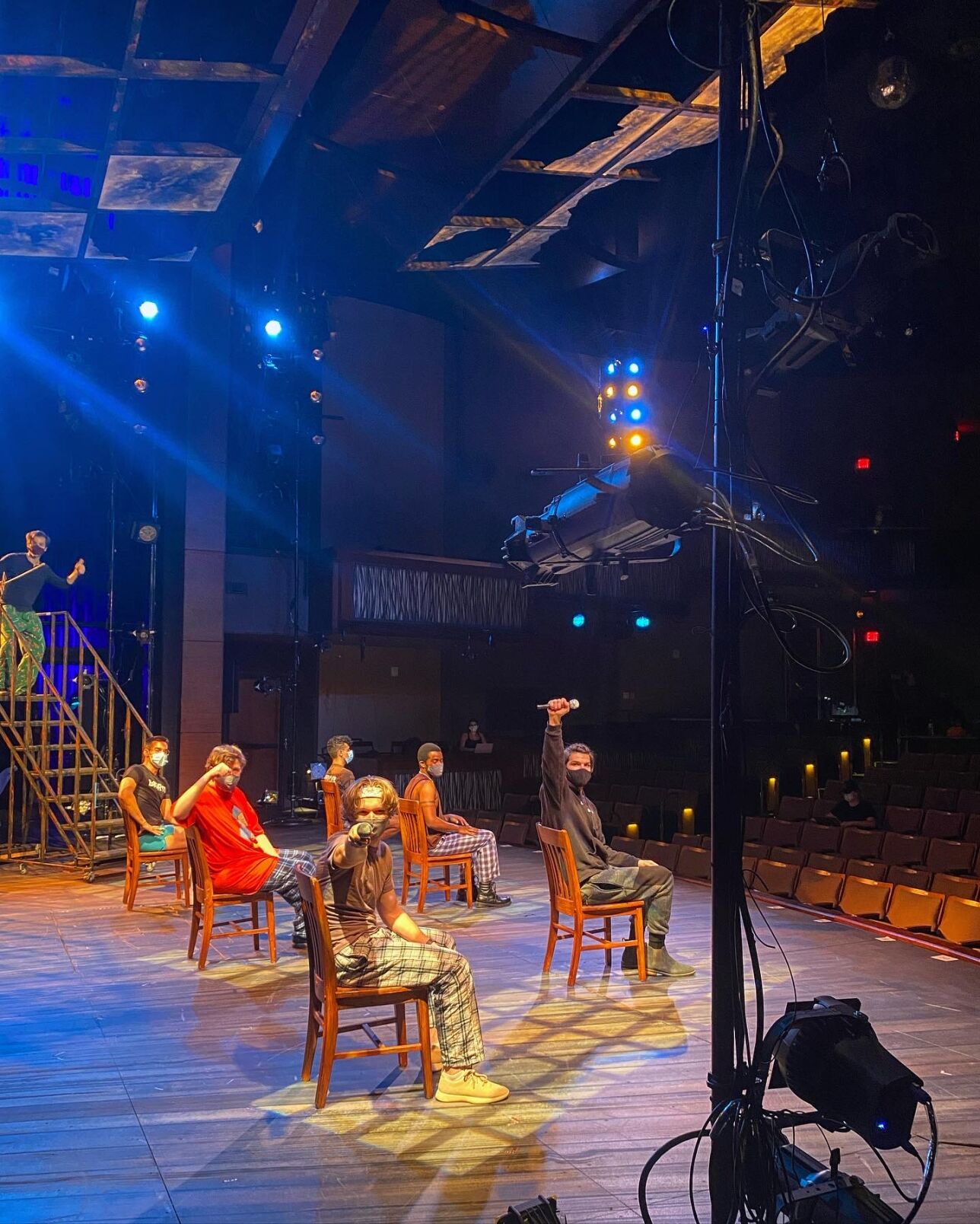 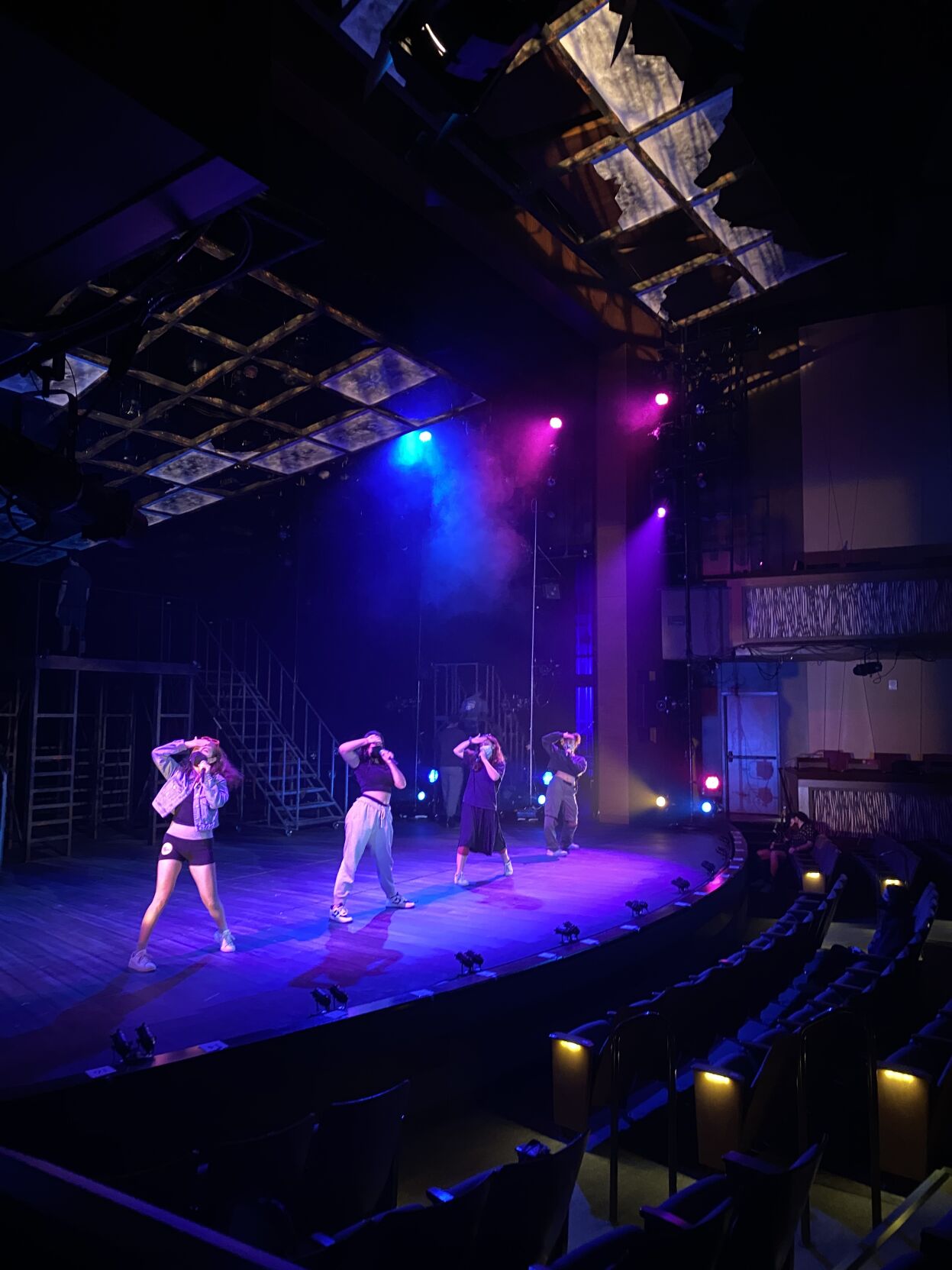 With rising heart rates and sweat sliding down their spines, the cast members of Texas State's spring musical production, "Spring Awakening," is exploring sex and sexuality while singing through masks, dancing across distances and adapting its timeline after a cast member tested positive for COVID-19.

Instead of being stilted by the university's COVID-19 regulations, the show's artistic team used masks and distance as part of its design. This shifted the lens of the show, causing what traditionally is a show dripping with on-stage sex and visual intimacy to mold into an exploration of sexual repression and separation.

“It’s a cool challenge," says Colin Trudell, a musical theater senior and integral cast member. "What do you do with a show about sex and sexuality when you literally can’t be near anybody?”

Trudell faced this dilemma head-on on March 23 when he tested positive for COVID-19. After yelling aloud in his apartment bedroom, he hesitantly called his director, knowing he was about to place a large COVID-sized dent in the production's progress.

"My view of the stage was just kind of from a corner of the theater on a little laptop they had set up," Kelly says. "We got work done; it just wasn’t very optimal."

Despite the Zoom frustrations, those back in the theater were able to make it work. With understudies and swings stepping in for the five missing cast members, choreography rehearsals in the theater moved forward as those in quarantine learned from screens.

The cast members were also forced to record music from their home studios. Trudell's positive test came just two days into a four-day recording period of the musical, when the cast sat together in the Jowers Center to create the musical backing for the version of the show that can be streamed.

When this was cut short, Gregory Bolin, the head of music direction and music theory and the show's music director, moved quickly and efficiently. He dedicated 40-50 hours of his time to create individual GarageBand files for each cast member and designed a program that kept the cast vocally "together" even while they were miles apart.

"I made little GarageBand files for each person and then underneath was a little track of me basically conducting with my voice," Bolin says. "Saying 'hold, two, three, four, and off, two, three, four.'"

Most of the cast happily took this on. However, there was a sense of dissatisfaction with the cast's separation. They longed to record the show as a whole, motivating Bolin to commit to one final solution.

Working with the head chairs of the Department of Theatre and Dance, Bolin carved a time in their overly-full rehearsal schedule to finish the group recordings. Now that the full cast and crew are back in the Patti-Strickel Harrison Theater together, Kelly finally sees the production coming together.

"I'm thankful I can be in the room again," Kelly says. "It really made me realize how much I truly miss live theater and just being in the room."

Only a handful of rehearsals remain "in the room" before the final recording, and although he thinks the show sounds incredible, Bolin still worries about the possibility of another obstacle coming their way.

Defying all odds, this show about sex has survived mask requirements, distancing, a positive COVID-19 test and even a monumental winter storm. Bolin urges students and theater lovers to tune in, buy tickets and enjoy the hard work his students have committed to Texas State's spring production.

"Spring Awakening" will take place virtually from May 7-10. For more information on how to purchase tickets for the event, visit the txstatepresents website.