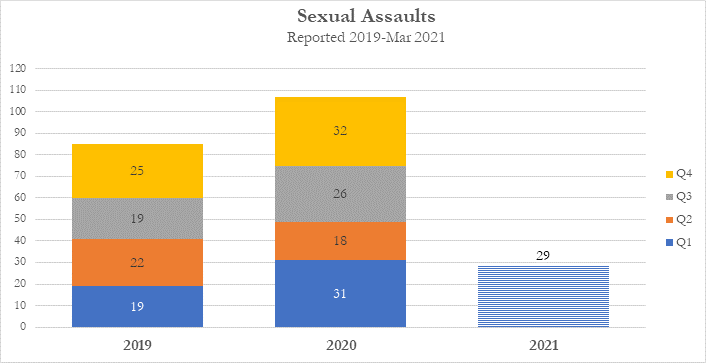 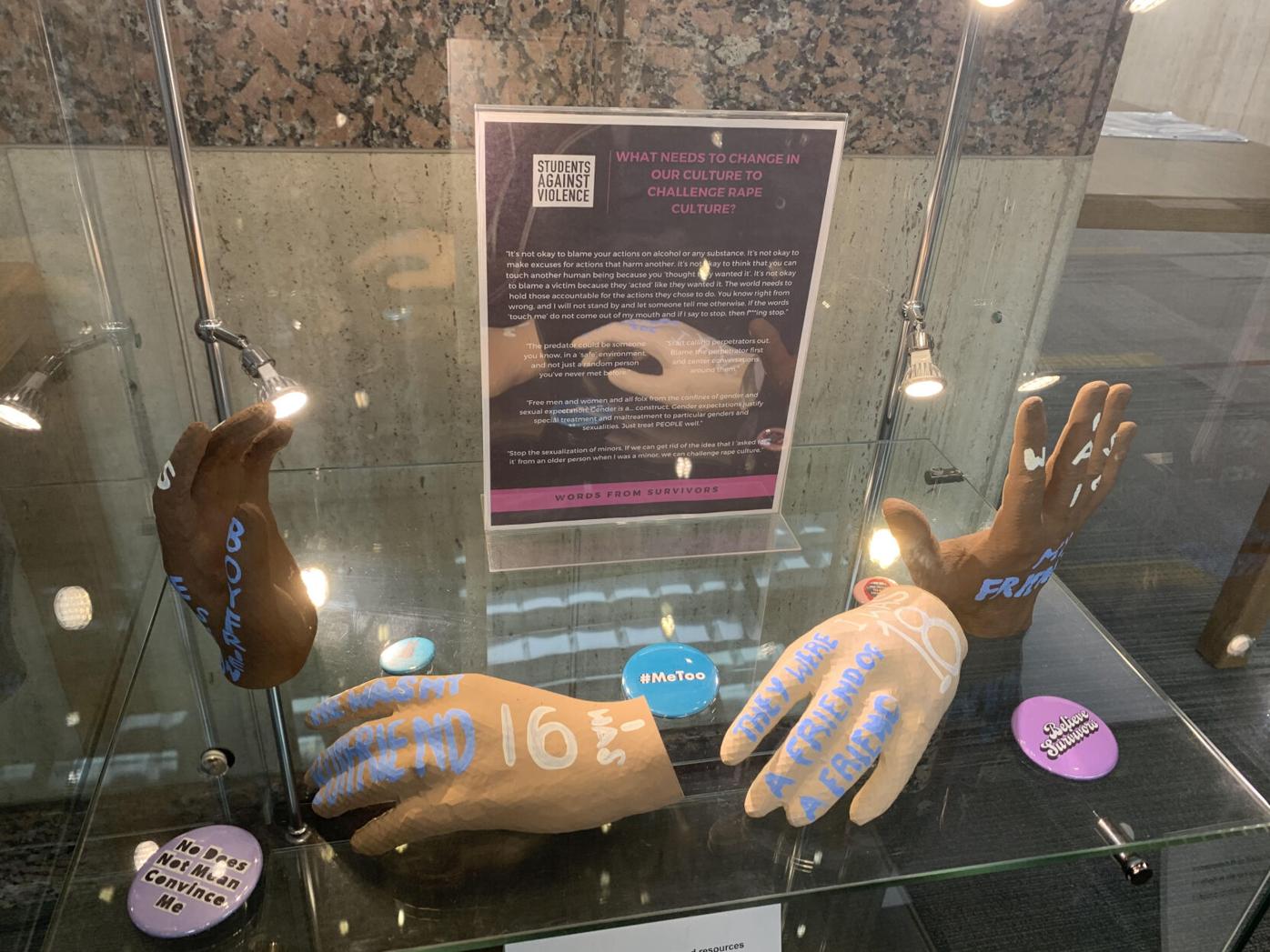 Part of the Like The Back of My Hand exhibit on the fourth floor of Alkek, Tuesday, April 13, 2021.

On the fourth floor of Alkek Library, a quote from an anonymous student and sexual assault survivor displayed in the Students Against Violence (SAV) installation reads, "Start believing us. It doesn’t matter if he was a ‘nice guy’ and your experience is different. What he did to me was real."

To bring awareness to sexual assault on college campuses, Students Against Violence (SAV) created an art installation titled "Like The Back of My Hand" on the fourth floor of Alkek Library — an interactive fixture that allows sexual assault survivors to anonymously paint on the back of a 3D printed hand the age they were assaulted, how they were related to their assailant and what action the community can take to better support survivors.

“The goal with this display is that [SAV] wanted to bring awareness to the fact that statistically, nine out of 10 survivors of sexual assault on a college campus know their assailant,” says Arielle Raveney, SAV president and journalism senior. “[SAV wanted to] do something that [would bring] awareness around sexual assault, but also give survivors a space to speak.”

In addition to the art installation, SAV will also host a virtual Consent and Boundaries Workshop Q&A on April 27 via Zoom. The Title IX Office, Student Health Center, Counseling Center and Hays-Caldwell Women’s Center (HCWC) will be participating in the panel to answer all questions regarding their services.

Following the Q&A is Denim Day on April 28 that will finish off with pairs of jeans being displayed on campus covered in messages from survivors.

The series of events will conclude with "Take Back the Night: Global Virtual Rally" on April 29, a virtual event in which sexual assault survivors will share stories and poetry, with activists and special guests from all over the world coming together in support of those victimized by sexual assault.

HCWC Director Melissa Rodriguez says the biggest issue facing survivors is people not believing them when they reach out for help.

“They feel shame and guilt,” Rodriguez says. “There's so much of that dialogue that happens just within themselves. And then when they hear [people's disbelief] out loud in society, and by people they know, people they care about, it drives them even further into silence.”

Victim-blaming and a lack of understanding are commonly experienced by survivors, according to a "Like The Back of My Hand" anonymous quote which reads, "We need to name the real problems and ask the right questions instead of victim-blaming [and] educate others about consent."

The HCWC seeks to combat this precedent by providing platforms for survivors to share their experiences and educate the local community on consent with Facebook live events every Thursday.

"Education is prevention," Rodriguez says. "We're committed to bringing their issues, their voice [and] their experiences to the community to create a safer community for survivors to be able to seek the services that they need, the support and the resources, without being ashamed or feeling to blame for their victimization."

According to a 2019-March 2021 Sexual Assaults Reported chart provided by the San Marcos Police Department (SMPD), sexual assault reports increased by 22 between 2019 and 2020. This number is expected to rise in 2021 as the first quarter is on track to surpass last year’s.

According to SMPD, these numbers may not indicate a rise in sexual assaults but rather the number of survivors willing to report. In a statement from SMPD, it says social media movements like the #MeToo Movement and education initiatives by local and campus organizations have contributed to the higher number of reports.

“The growing social movement of sexual assault awareness and education has encouraged more women and men to share accounts of their victimization and survival,” SMPD says in the statement. “Simply put, the movement has given more survivors the courage to come forward and report victimization.”

Counseling Center Director B. Lynne Reeder says underreporting is high among marginalized groups and male groups. The misconception that sexual assault only happens to cisgendered females is yet another factor that discourages survivors to report.

“[Cultural factors] can have an impact on the willingness to seek out,” Reeder says. “We know sexual assault happens across genders and certainly across sexual orientation and other presentations and identities. And so I think that's the part that some people don't get is that it's not just women or female-identified individuals. It can happen to men, and male-identified as well. And so those are the pieces that sometimes get lost in the conversation around sexual assault.”

This general lack of education and conversation around consent makes it difficult for individuals to recognize sexual assault when they see or experience it.

"It's important for people to know [that] if you're not sure, pick up the phone and call," Rodriguez says. "That's what we're here for. That's what our advocates are trained to do. Call us. We want to talk to you about your specific situation."

If someone may have experienced sexual assault, they can call the Rape Abuse and Incest National Network (RAINN) at 800-658-4673 or visit its website. For more information on events happening throughout April, visit the Students Against Violence website.