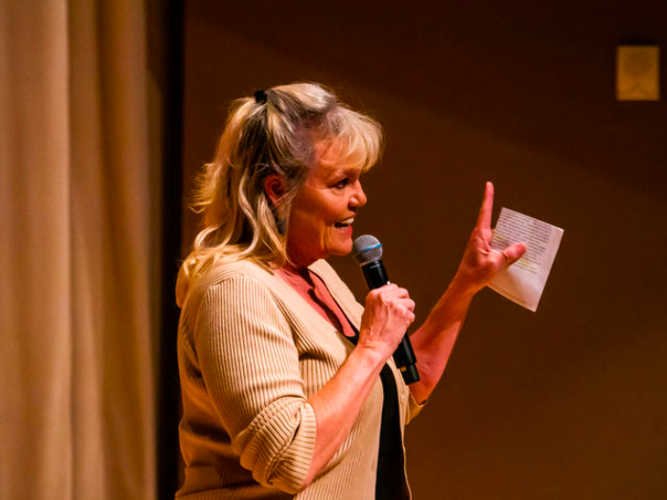 Wendi Rios, an administrative assistant of scholarships and events at McCoy Business College, delivers a speech on reconnecting with the son of a past friend at Star Stories, Wednesday, Oct. 12, 2022 at the Performing Arts Center in San Marcos, Texas. 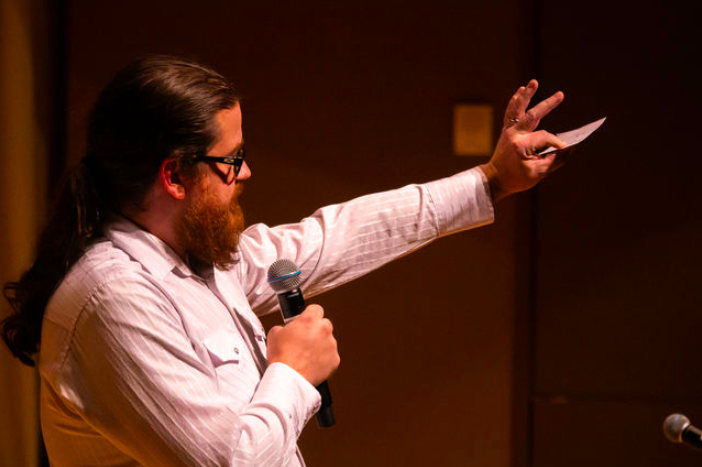 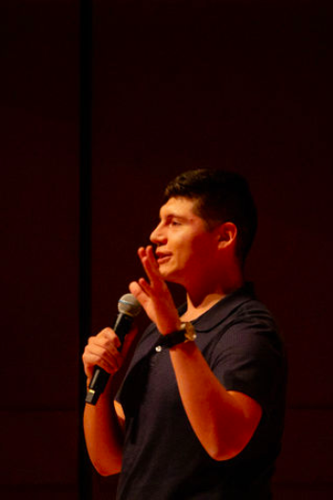 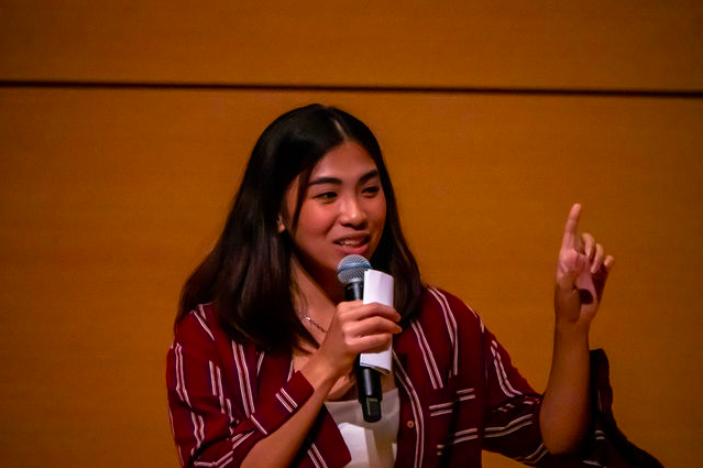 Texas State electronic media sophomore Luis "Wiski" Ignacio delivers a speech on moving to the U.S. after spending her childhood in the Philippines at Star Stories, Wednesday, Oct. 12, 2022 at the Performing Arts Center in San Marcos, Texas.

Wendi Rios, an administrative assistant of scholarships and events at McCoy Business College, delivers a speech on reconnecting with the son of a past friend at Star Stories, Wednesday, Oct. 12, 2022 at the Performing Arts Center in San Marcos, Texas.

Texas State electronic media sophomore Luis "Wiski" Ignacio delivers a speech on moving to the U.S. after spending her childhood in the Philippines at Star Stories, Wednesday, Oct. 12, 2022 at the Performing Arts Center in San Marcos, Texas.

Community members gathered at the Performing Arts Center last Wednesday evening for The University Star's fourth annual Star Stories: True Stories of Life at TXST. Organized and presented by The Star's Public Relations section, the event featured true personal narratives from storytellers that revealed something about the community's greatest challenges and opportunities.

Edgar Torres grew up in Rancho Grande, Reynosa, Tamaulipas, Mexico. On June 28, 2008, when he was just eight years old, his life changed when he was forced to move away from his roots with the promise of more opportunities along the border. What was supposed to be a trip to see family in the U.S. turned into a 14-year-long journey to get where he is today.

Torres expects to graduate in December with a bachelor of science degree in chemistry and a bachelor of art degree in communication. He hopes to eventually attend a top biomedical engineering program. His experience adjusting to the U.S., the opportunities that his parents have given him, and the Texas State programs and organizations he is involved in helped him reach where he wants to be.

"Never give up," Torres said. "Things will get hard, life is not fair, life isn't easy, but it wasn't designed to be easy.”

Having to adjust to a new country, culture and language, Torres matured at a young age, working twice as hard as other students while his parents worked just as hard to provide for him and the rest of his family.

“Texas State has been very welcoming and has created a very nurturing environment for me to grow, but also for me to prepare for the next stage of my life,” Torres said.

Jordan Stern, Associate Director for Student Success in the School of Music

Growing up, Jordan Stern thought college was an impossibility. His family lived in poverty, no one in his family had ever gone to college before and attending college was discouraged in his family's religion. After showing interest in college in fifth grade, Stern was taken out of school until high school when he was able to attend again.

Stern and his sister were homeschooled by their mother until Stern's sophomore year of high school when he returned to a traditional school.

Stern had excellent grades in high school and a raw talent for music, something that made him stand out. Thomas Valdez, his high school band director and William Berman, one of his teachers, helped convince Stern's father that college was a possibility.

Stern would eventually receive enough financial aid to get him through his first three years at Southwest Texas State.

“Against my mother's wishes off, I went to San Marcos and it was like heaven on earth,” Stern said. “I had never experienced that kind of freedom. It was refreshing and being able to do what I wanted to do, not being forced to go to church three times a week, it was great.”

Stern's father was diagnosed with cancer halfway through his freshman year and passed away shortly after. Stern said his mother wanted him to drop out of school to take care of the family. When he made the decision to stay in San Marcos, his mother refused fill out his FASFA.

The summer before his senior year at Texas State, Stern was accepted to the International Festival Institute program on a full scholarship. He played in an orchestra with students from schools like Juilliard and Eastman. When he was not performing, however, Stern's impending homelessness was heavy on his mind.

The day before the start of his senior year, he found himself sleeping in his car without a way to pay for his classes, the aftermath of his mother not filling out his financial aid application.

"Gasping for breath. I woke up in panic," Stern said. "It took a while for me to figure out where I was in these cramped uncomfortable surroundings that didn't quite feel right. I sat up, and I forced myself to breathe a little bit slower and then I realized it was the night before the first day of my fourth year in college."

Stern received bachelors degree from Texas State in percussion performance and music studies with a teaching certification. He received a master's degree in music education as well as a doctorate in musical education degree. He said he is grateful for his job at Texas State as it allows him to bring stability to his students' lives, just as his mentors did when he needed the guidance and support.

Wendi Rios, Administrative Assistant of Scholarships and Events at McCoy College of Business

Rios parents owned a grocery store where she lived by the coast growing up. She and her family grew very close with the people on the ferries that they would ride to go to the bank and the store three to five times a week. On the ferry is where she met the man that greatly influenced her life, Jesse.

Jesse witnessed Rios grow up from age nine to when she was a senior in high school. She said that her family embraced him just as he did them. At her high school graduation, in which there were only 16 students, Jesse was there to celebrate. Rios said he was the only Black man in attendance at the graduation.

"Jesse was in my graduation pictures," Rios said. "He celebrated afterwards with us. He was just an amazing young man."

Rios came to work at Texas State in the Office of Retention Management and Planning in 2012. At a campus bookstore sale, she started talking to a nearby family whose son was an incoming freshman at Texas State. Questions quickly turned to familiarity as the student turned out to be Jesse's son.

Jesse's son told Rios that his father had died a couple of years prior. Rios made sure she told Jesse's family how amazing of a man he was to her, and someone whose impression on her changed her life because of his sincerity and kindness.

Growing up, Anna Garcia was shunned by many for being herself. She said nobody liked her because of her personality. She energetic, outgoing and enjoyed talking to people, but behind her back she heard others call her annoying.

"I changed every aspect of myself just so I wouldn't feel like an outsider, a burden, just so I could finally be accepted," Garcia said.

Garcia tried to find her place through performing as a cheerleader for 14 years. Still unsure of who she was, she knew that leaving South Texas to attend Texas State would give her the breath of fresh air she was searching for.

Since coming to Texas State, Garcia has found a second home with people she loves. She enjoys hanging out with her neighbors, being with her roommate and knows that she wouldn't have been able to find herself if it were not for her past.

Luis "Wiski" Ignacio grew up in the Philippines in Southeast Asia. There, she attended school. Ignacio said the pandemic affected her by making her home feel like a workspace, draining her motivation to continue with school and take a short break from school to pursue acting for a while.

After her grandma, who lives in the U.S., invited her for a visit, Ignacio took a chance and did not tell her parents she had bought a one way ticket to America.

Upon her arrival in Texas, Ignacio did not know what to do. Her parents gave her a one-year ultimatum to discover what she was going to do in the U.S. before having to return to the Philippines. At first she tried to pursue acting again, but after not being successful she ultimately tried attend school again.

Since coming to Texas State Ignacio is glad that she took the opportunity that she was given. Although there were obstacles along the way, Texas State broadened her horizons with a different learning environment.

Growing up, Nichaela Shaheen was stuck between two worlds. As a Palestinian-Mexican American, she experienced pressures from both cultures leaving her lost and unsure of her identity.

Shaheen grew up with divorced parents with her dad from Kuwait and her mom from Mexico. She said that while food is the ultimate love language and she was expected to finish her plate in the Mexican culture on her mom's side, her dad's side's Palestinian culture, took great importance in body image and looks.

"At the ripe age of 12, Nicky found herself lost in a [weight watchers] meeting, tuning out the speakers sharing their own personal stories. Instead, she was lost in a thought of thinking what she was going to have for dinner," Shaheen said.

Torn between two cultures, Shaheen wasn't confident in who she was and instead going by her full name Nichaela.

In high school Shaheen found her passion for theater and discovered her love for debate, and slowly she found herself in the in between and now proudly goes by her full name and not her nickname, something that she assigns only to the lost young girl she used to be.

"12-year-old Nicky is looking back and smiling ear to ear because while she remembers that you can be lost in the 'in between,' the 'in between' is where she needed to be," Shaheen said. "She's not Arab enough and she's not Mexican enough but she's enough for herself."

Editor's note: A printed version of this story listed Nichaela Shaheen's major incorrectly. This mistake has been corrected.

A second chance: Spears' life changed by near death experience

The opportunity to play Division I collegiate football is not something Texas State redshirt… Read moreA second chance: Spears' life changed by near death experience