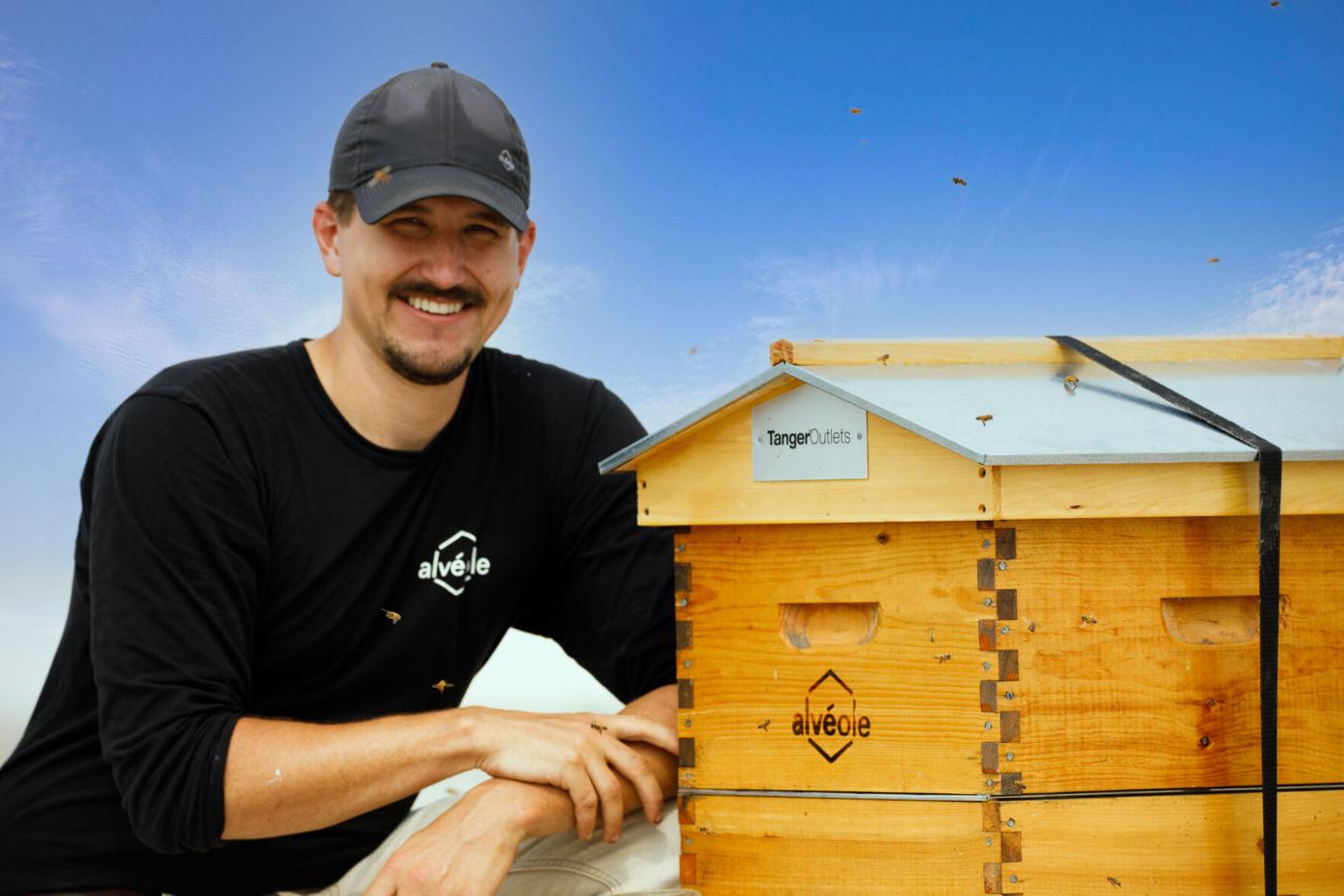 Kevin Kohli smiles next to the bee hive installation on top of the roof at Tanger Outlets San Marcos. According to Kohli, the colony of bees can be as large as 50,000 at peak season. 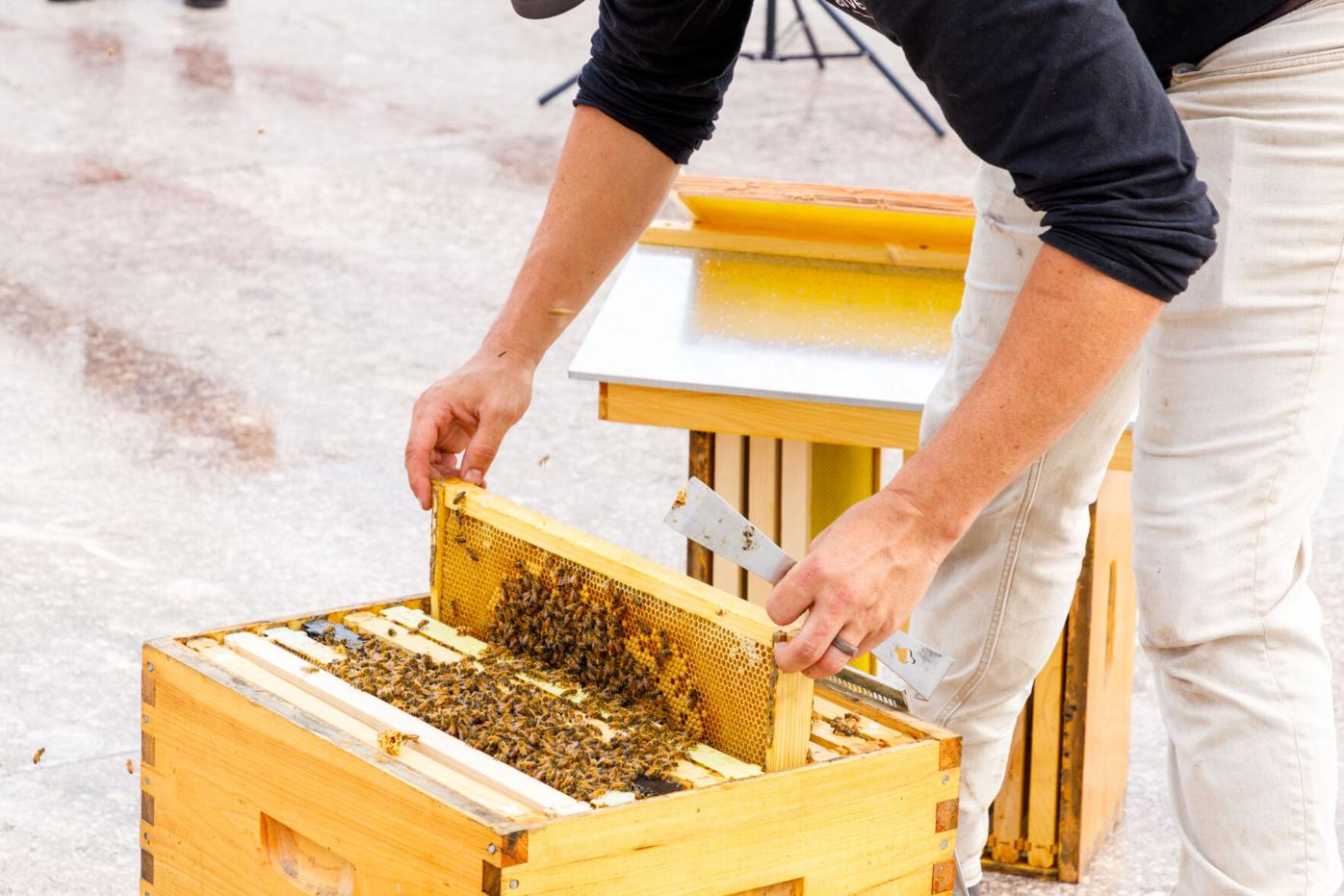 Alvéole beekeeper Kevin Kohli sets up a bee hive installation on the roof of the Tanger Outlets in June 2021 in San Marcos.

In an effort to teach San Marcos the importance of a sustainable environment and to spread awareness on the declining honeybee population, San Marcos Tanger Outlets has partnered with Alvéole, an urban beekeeping company, to install a honeybee colony on the rooftop of the mall.

The beehive was first installed in June when the outlet's concrete walls received an agricultural touch. Alvéole's program includes maintenance and hive management from an urban beekeeper, workshops aimed to help San Martians learn about bees and hives as well as honey harvested at the end of the season.

With its first workshop yet to be scheduled, Allison Murphy, marketing director for San Marcos Tanger Outlets, says she's excited for shoppers and retailers to learn more about bees and the project's sustainability efforts.

"I've learned a lot more about bees than I ever thought I would," Murphy says. "And just in conversations with our tenants, as soon as we start explaining it to them, they get excited, too. So having something that our tenants — and hopefully soon our shoppers — are all on board with is something we're super excited about."

Kevin Kohli, a Texas State alumnus and the Alvéole beekeeping team manager for Austin and Houston, says bees were selected as the main subject because, although bees are small, they are intensely connected with the environment. If bees are not doing well, everything else is soon to follow. Through its educational workshops, Alvéole hopes to bring awareness to the rapid decline of bee populations throughout the U.S. and Texas.

"We like to think that it's the tip of the sphere that's going to spark larger change and eventually really kind of help redesign and redefine cities to make them less impactful and more beneficial to the environment," Kohli says. "Because, right now, cities have a really large footprint. They consume far more than they produce, and we hope to kind of balance that out."

Since 2013, Alvéole has reimagined the traditional beekeeping model by installing rooftop beehives in urban cities across the world, from America to France. The company currently has 3,372 beehive installations throughout 21 cities.

The initial partnership between Tanger Outlets and Alvéole was launched at a Tanger Outlet in Canada. Since then, Alvéole has partnered with Tanger locations across the U.S. and Texas, including in Austin, Dallas and Houston.

Murphy says the partnership came naturally, and the company is excited to see how the San Marcos community interacts with the program.

"[Tanger Outlets San Marcos is committed] to environmental responsibility and staying connected to our local community, so the partnership was just the perfect opportunity to do both," Murphy says.

Alvéole works with businesses, offices and other companies to bring full beekeeping services and provide education on the importance of honeybees and pollinators in a sustainable environment.

"Honeybees are a really docile variety of insect," says Michelle Winter, the Alvéole beekeeping team manager for Dallas. "It's super easy to bring that hive into a city and show it to people and get them thinking about pollinators in a different way and all of the living things around them in their city and what they can do to maybe be taking better care of their surroundings."

At the peak of the season, the bee colony can be as large as 50,000 bees. Currently, the San Marcos colony consists of 9,000 bees. Through MyHive, participating communities can view their local bee colonies and receive updates on the colonies' size as well as the daily flight range of bees. Kohli also posts updates of his visits to the hive on the site.

The beehive roof installation at Tanger Outlets will stay up year-round.

For more information about Alvéole, visit its website. To see updates on the Tanger Outlets San Marcos' beehive, visit the MyHive website.