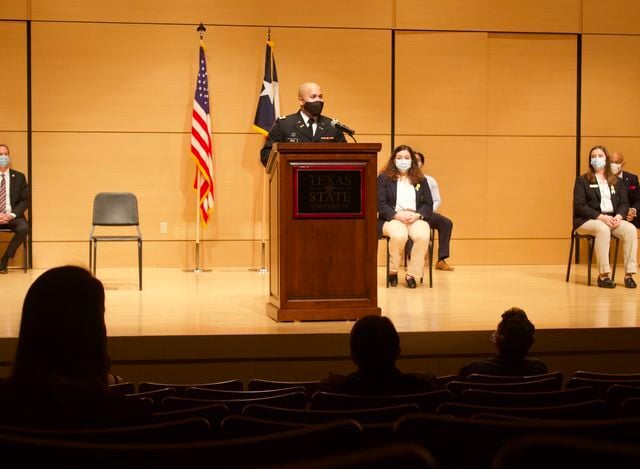 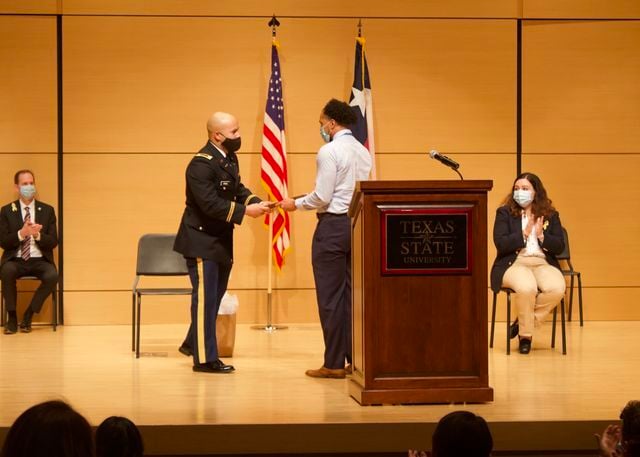 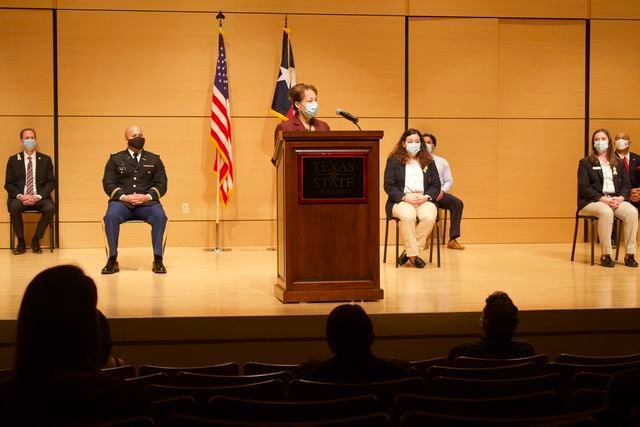 The program was held inside Recital Hall of the Performing Arts Center and was streamed virtually for community members to join as in-person attendance was limited to student, faculty and staff veterans who RSVPed in advance.

"Today we take time to honor our veterans, their service and commitment to our country," said President Denise Trauth in her opening remarks. "We are proud that Texas State has a strong reputation for being especially supportive of our military service members and veterans. It is truly an honor for Texas State to be home to so many of America's heroes."

Trauth gave thanks to the Office of Veteran Affairs as well as the various veteran support groups on campus who work to support the university's veteran population.

First Lieutenant Anthony Ayala was introduced as the keynote speaker for the Veterans Day Commemoration ceremony. First Lieutenant Ayala began his remarks by recognizing those who served in active duty, reserves, national guard and all military branches.

"There are more than 17 million veterans that proudly defended our country. On this day we take an opportunity to honor our veterans, to thank them for their service," Ayala said.

"The nation will always be grateful for the mothers, fathers, brothers and sisters who fought for our freedom," Ayala said. "Veterans, I'll say again, thank you for your service. God bless veterans and God bless the United States of America."

President of Texas State's Veterans Alliance and Marine Corps veteran Ezra Ernest presented the Above and Beyond Awards, annual awards honored to faculty, staff and offices that demonstrate outstanding commitment to advancing the veteran community on campus.

The Department of Military Science was awarded as this year's Above and Beyond Military Friendly Office.

"On behalf of the Veteran Alliance of Texas State, thank you all to the Above and Beyond award recipients. Today we honor all of your outstanding contributions to support student veterans at Texas State," Ernest said.

Following the presentation of awards, the Armed Forces Medley played and audience members stood when their branch was represented. The ceremony concluded as the Army and Air Force ROTC retired the colors.

For more information about the annual Veterans Day Commemoration visit its website or watch the virtual ceremony.