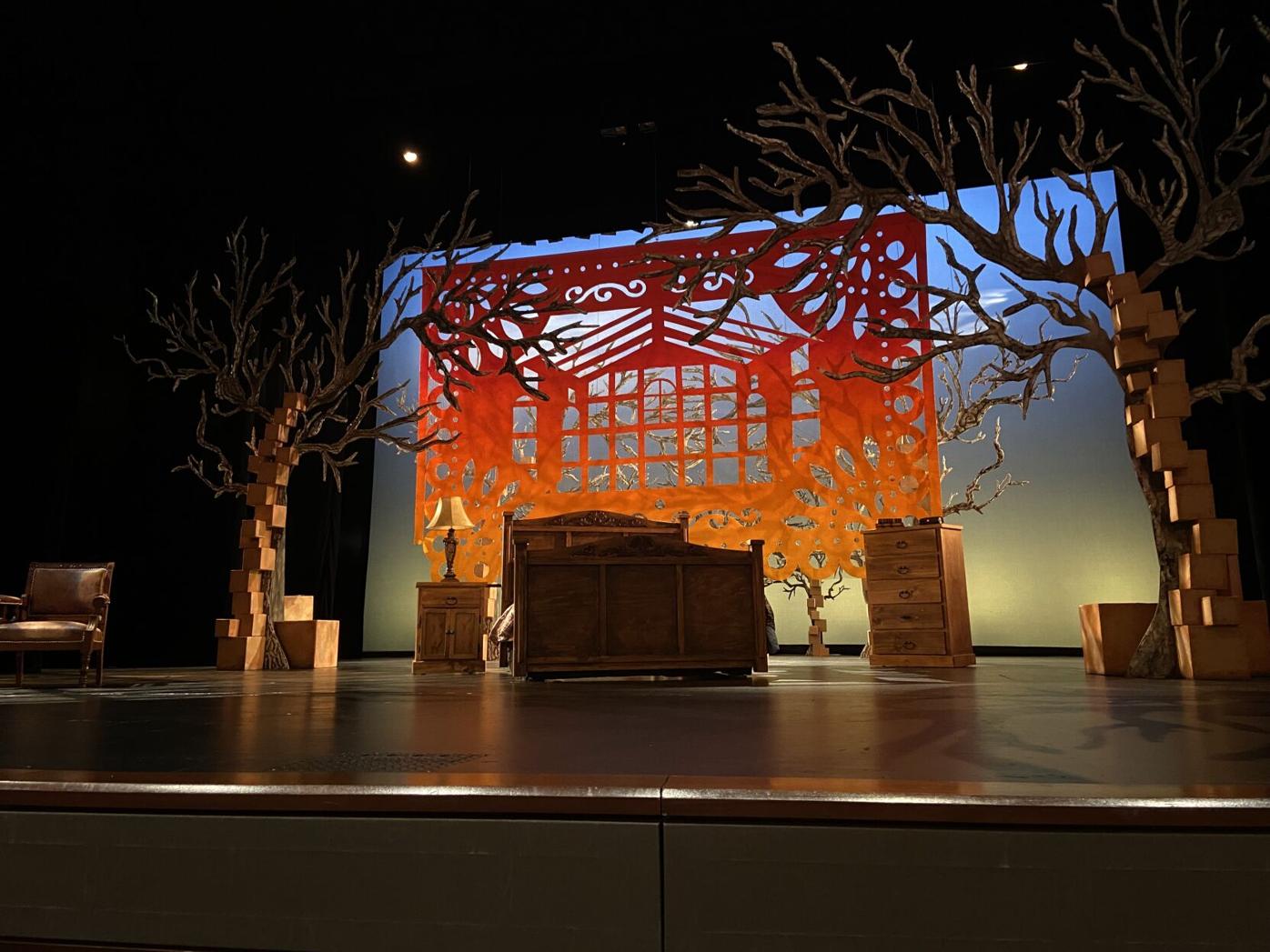 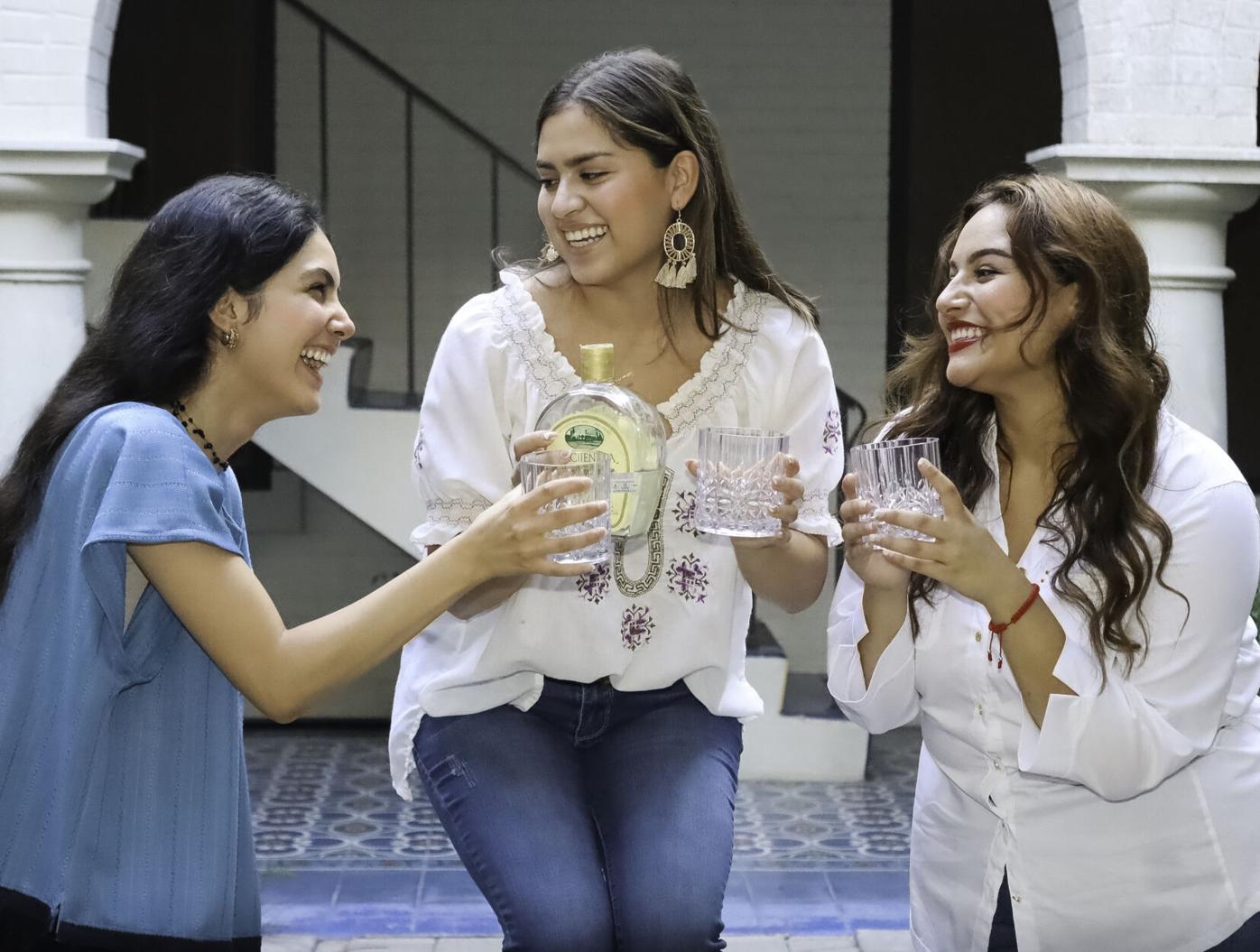 (From left to right) Ana Paula Monterrubio, Rachel Arguello and Yasha Alaniz, members of the "El Nogalar" English cast, pose for a photo at the Taylor-Murphy courtyard.

In a play exploring corruption, classism and family relationships, the Department of Theatre and Dance presented “El Nogalar,” a story of a family’s struggle to keep their homestead amid the looming threat of the cartel in northern Mexico.

The production ran from Sept. 28 to Oct. 3 and was led by guest director Anna Skidis Vargas. "El Nogalar" featured alternating English and Spanish primary casts with subtitles for both performances.

Based on the 1903 play, “The Cherry Orchard,” by Anton Chekhov, “El Nogalar” is a modern adaptation written by Tanya Saracho. The story follows the Galvan family, who face the threat of losing their estate and social status to the cartel in modern-day northern Mexico.

The modernization of “El Nogalar” allowed Hispanic cast members to connect with their characters and personal backgrounds throughout the performance.

Anastacio Gutierrez, an acting senior, played the character Lopez, a handyman who works on the Galvan family property, in the English cast. Gutierrez said he shared a personal connection to Lopez in that they have similar childhood experiences related to their Mexican heritage.

“My character is Lopez, and he was a worker on this property,” Gutierrez said. “He grew up there as a kid, his father worked there, and his grandfather worked there. It’s just something that I resonate to like on a level I get from my father. That’s like my heritage.”

He also saw a resemblance between his own family's history and the Galvan family's story.

“I really resonated with the story,” Gutierrez said. “Because my dad and my grandpa, when I was a lot younger, had a property back in Mexico. Especially in the area where I’m from, there’s a lot of issues.”

Elisa Pedraza Sanchez, a theater freshman, played Dunia, the Galvan family's maid, in the English cast. Pedraza Sanchez said being in a play with a Hispanic cast was special as they connected with each other through shared experiences and heritage.

“One time we had like an analysis of the play,” Pedraza Sanchez said. “And at some point, we were just telling stories of what it is like being Hispanic in this country. What it was like being Hispanic in general. We were just agreeing like ‘wow’ we’ve never felt more seen. We never felt more comprehended by a group of people because we all could relate to each other.”

Guest director Vargas played a big part in bringing the production's cast and crew together. Cast members said her work ethic and the collaboration she had with them made the experience enjoyable.

“I’ve never worked with anyone like her," Pedraza Sanchez said. “She is so collaborative with the cast members and also the stage-managing team and the crew team. She is so respectful of everyone’s ideas and always on time.”

Gutierrez said Vargas’ approach to working with the actors made rehearsals fun and helpful.

“I enjoyed working with her,” Gutierrez said. “Every rehearsal was fantastic. She had a great approach of knowing when to let [the actors] play with [the characters] and when to step in.”

With the production's schedule now complete, the cast members hope their portrayal of the Galvan family's story of hope and culture offers audiences a look into their Hispanic heritage.

Ricardo Lopez Montilla, an acting freshman who was an English cast understudy, said he wanted audiences to walk away from seeing "El Nogalar" with a fresh perspective in the modernized Mexican approach.

For more information on upcoming productions from the Department of Theatre and Dance, visit https://txstatepresents.universitytickets.com/.

An earlier version of this story incorrectly stated that Anastacio Gutierrez was in both the English and Spanish casts. This mistake has been corrected. We sincerely apologize for this error.