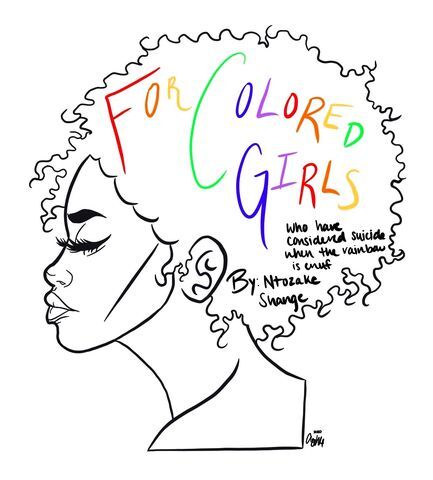 A digital illustration by Aaliyah Ward advertises her production of “For Colored Girls Who Have Considered Suicide/When the Rainbow Is Enuf". 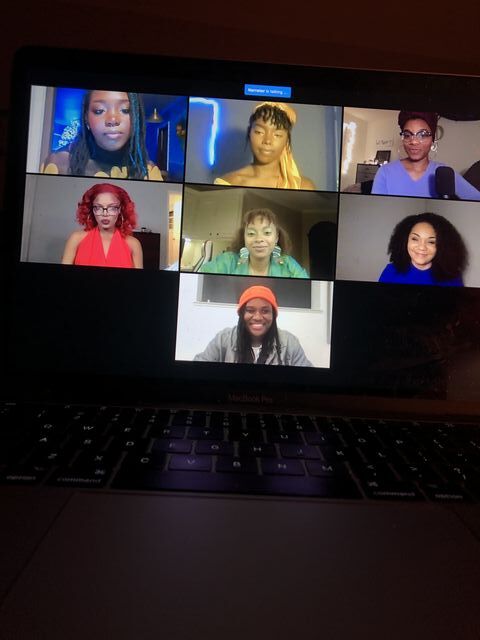 The cast of "For Colored Girls Who Have Considered Suicide/When the Rainbow Is Enuf" performs live on Zoom Saturday, Dec. 5, 2020, for a large virtual audience.

Through its archway of bright, unapologetic prose, “For Colored Girls Who Have Considered Suicide/When the Rainbow Is Enuf,” lit up the Zoom stage Dec. 5 with a student-run production dedicated to the colorful lives of Black women.

Originally written as poetry, the play features vignette stories of seven Black women who have endured the pain of sexist and racist societies.

“This show’s what kept me afloat during all of the craziness that 2020 has had,” Director Aaliyah Ward, an acting junior, said. “After the events of June 2020, I knew I wanted something that would uplift Black voices—specifically the voices of Black women.”

However, looking around at her virtual semester, she did not see a clear path for those stories to seep through the cracks. Instead, she reached for her favorite play, “For Colored Girls Who Have Considered Suicide/When the Rainbow Is Enuf", and despite being a first-time director and producer, was devoted to creating a space that would make her voice heard.

With encouragement from professors Nadine Mozon and Neil Patrick Stewart, Ward pulled together a community of fellow Black actresses to own the screen for a night.

“It was something where Black women could have their voices be heard artistically and not have it be something of sadness,” Ward said. “It was a celebration of Black joy and Black women.”

The nine Black women in her acting major program are where she began her cast search, combining students from all classifications to enhance the voices already present in her community. She received a resounding “yes” from all her classmates, each one eager to work on something of passion during a moment when theater seemed to be on-pause.

“It is a new thing that I didn't know we had access to,” Morgan Amalbert, an acting senior, said. “This whole time has been innovative, opening our eyes up to new platforms.”

Ward’s persistence to pave a path despite odds is present within the play itself, where her favorite characters, “Lady in Blue” and “Lady in Green”, deeply explore the need to survive and the concept of self-trust. Sydney Cooper, an acting freshman, explores self-love and trust in-depth through her character, “Lady in Orange.”

“Something I’ve learned is that you can’t love until you’ve learned to love yourself,” Cooper said. “You have to find something within yourself to make it easier to connect with the people around you.”

Each of the women graced the virtual stage in her character’s vibrant color, a full rainbow of red, orange, yellow, green, blue, purple and brown, and although confined to their own Zoom frames, the women swayed, laughed and cried together, cultivating the connection Ward wanted when beginning the project.

Despite whatever challenges Ward faced on the virtual stage, her show was able to glean a large audience of all ages, races and backgrounds. The virtual platform made it accessible for people across the country to watch and listen to the anthem of the women.

Ward hoped from the beginning her show would not only uplift the voices of the cast but that as many Black women as possible would see the show and share in the community as well.

Jada Owens, an acting alumna, who watched a few of the students starring in the play throughout their college careers, tuned in to the show and says she loved it.

“To see these women create such chemistry on this platform was beautiful to watch,” Owens said.

As the show came to a close, each cast member reappeared on-screen to honor the group's work in a virtual bow, accompanied by written cheering of audience members in the Zoom chat. The cast signed off with a menagerie of smiles and laughter, an affirmation of Ward’s original goal becoming reality.

“I want them to feel just overwhelming joy, honestly,” Ward said. “To be able to create art like this that is loud and proud. We deserve to be heard and seen in this way.”