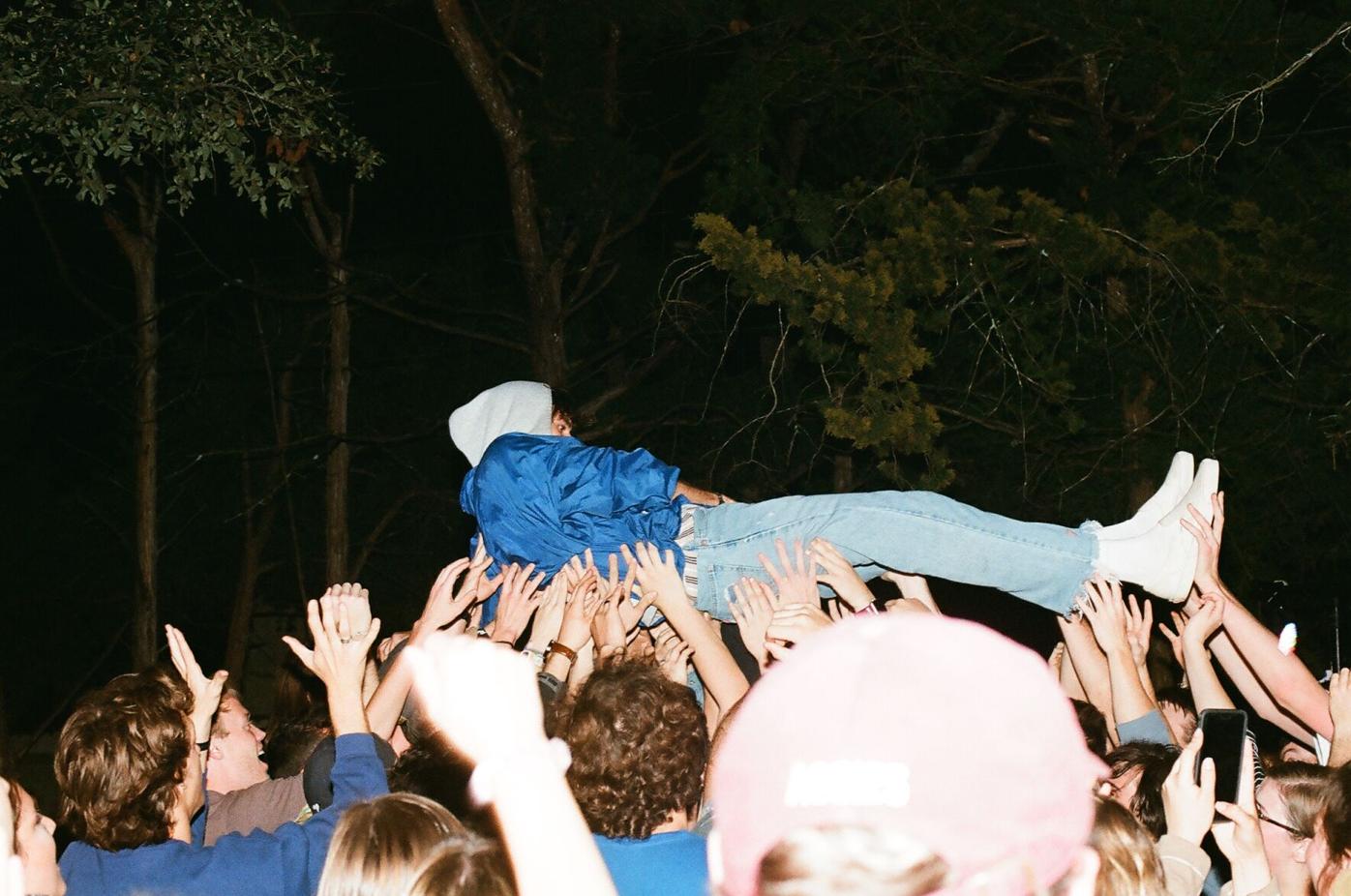 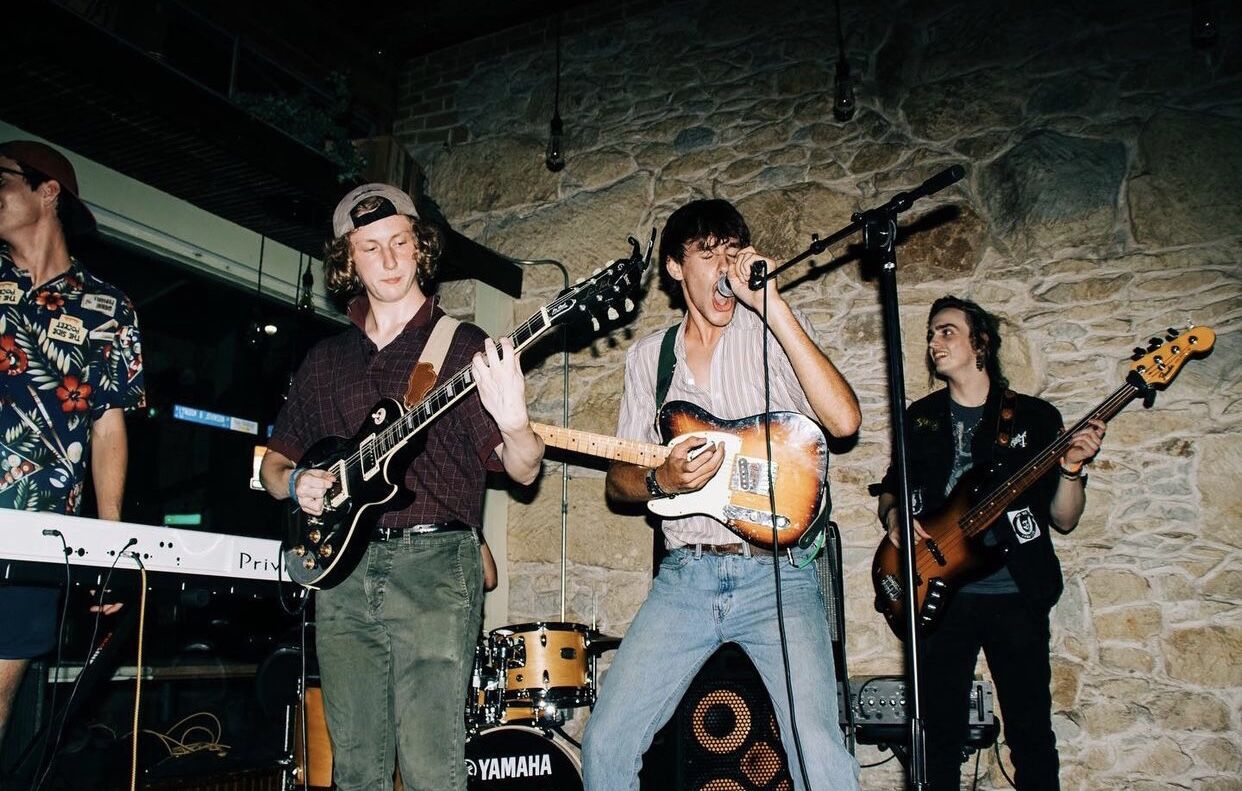 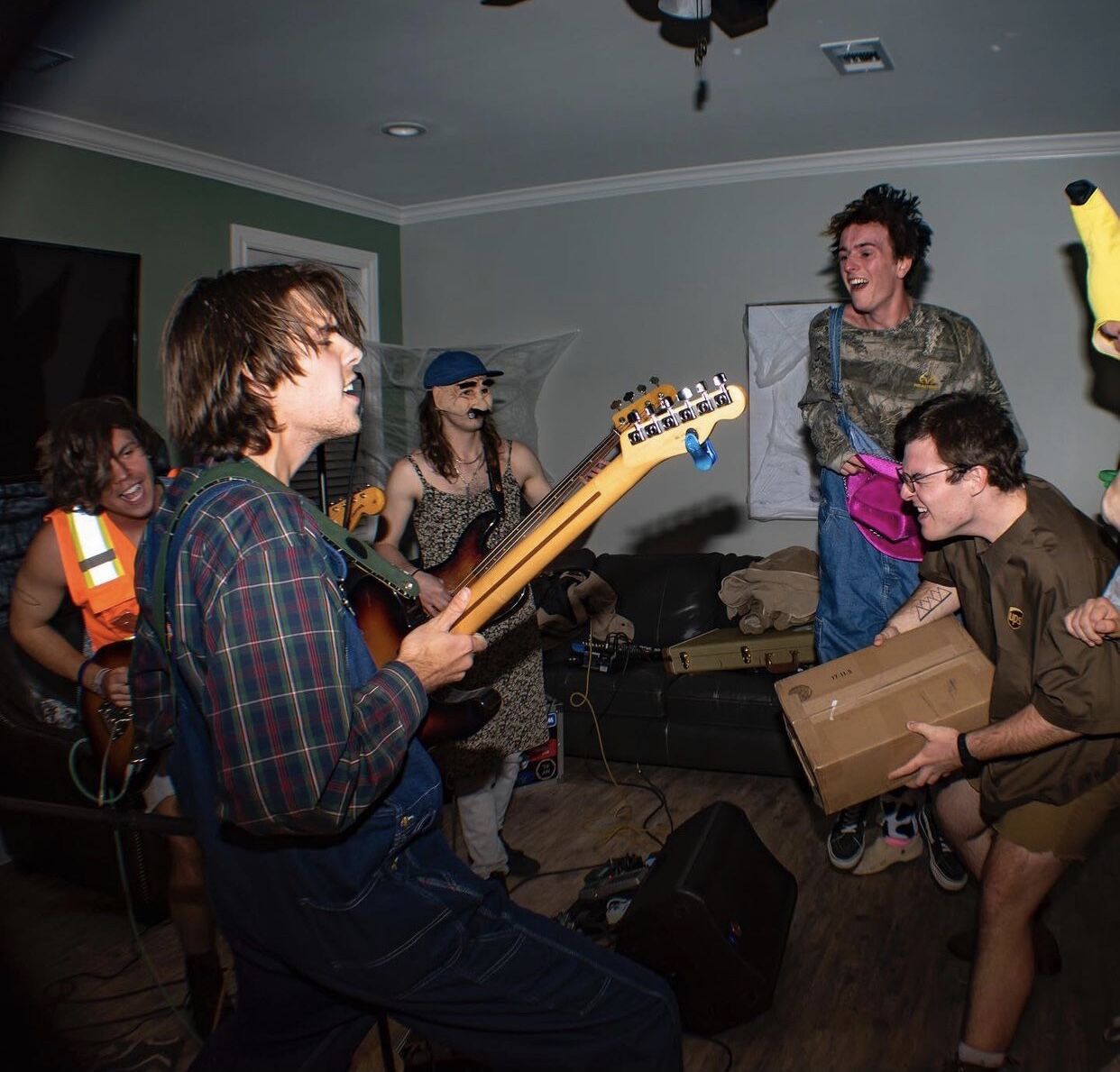 Eli Josef rocks out with his bandmates at his home in Wimberley.

"[My dad] is really into music so, through that, I kind of found my own likings of different bands and whatnot but really that Barbie CD player," Josef says.

Originally from Wimberley, Josef, a local San Marcos artist, started songwriting at the age of 16 and was influenced by indie pop artists such as Rex Orange County and Mac Demarco. Today, with the help of his band members, Josef has released two albums and eight singles.

Josef and his high school friends turned bandmates moved their band to San Marcos after frequent visits to the city convinced them it would be the best fit.

Upon obtaining a new guitar, Josef began taking lessons and learned how to play rhythms and basic chords. He joined the Wimberley High School jazz band where he played alongside good friends like John Ziola, a sound engineering junior.

Sound mixing began as a hobby for Ziola in middle school, but as he entered high school, it soon became the root of his future career goals. When Josef needed help mixing his music following the release of his first EP, "Grocery Store," he reached out to Ziola who now mixes all of the band's music.

"I just kind of hit people up and offered to help more and more people to sound mix for them," Ziola says. "Eli had just been recording his own stuff in his room using GarageBand. He's been doing that since freshman or sophomore year of high school, so it got to that point where he was actually wanting to release music. I guess I was 20; he asked me if I could mix for him, and he paid me like $50 or something. I was like, 'Sure, I'll do it,' and I've been mixing for him ever since."

Also in the jazz band was James Caton, Josef's bass player and a jazz performance student at the University of Texas at Austin. The two began playing music together in a fake music group they formed in high school.

"We would just jam all the time, just playing music. That's kinda how [our friendship] started," Caton says. "We had a punk band originally called the Turkey Boys, which was like [really] violent and that's kinda where Josef's crazy live show stuff started, our crazy punk theatrics and everything."

In the hallways of Wimberley High School, Josef would come across Coy Hollar, the current drummer for Josef’s band.

"I had a few classes with him now and then, so I would see him and we were tight," Hollar says. "We would joke around and stuff like that, but we weren't really like friends; we didn't hang in the same circles."

After the two graduated from high school, Hollar messaged Josef on Twitter about collaborating to record Christmas music covers. Upon releasing them on Soundcloud, Hollar reached out again and told Josef he would love to play live shows with him.

The newest addition to Josef's band is Jonah Brown, the photographer and guitarist for the band. The two met in middle school through a co-op homeschool program. Two years ago, knowing Brown played guitar, Josef asked for his help on a song.

"[Josef] texted me and was like, 'Hey, I need you to come play,'" Brown says. "And, I show up and it's a song about Aubrey Plaza, the actress. It was hilarious."

The song, titled "I Love You Aubrey Plaza," which began as a creativity exercise for Josef, is now his most streamed song on Spotify and has even received recognition from the actress herself.

On top of playing guitar for Josef's band, Brown also takes photos and edits music videos for the band. Largely inspired by King Gizzard and Talking Heads, Josef and his bandmates are set out to create their own unique sound and image.

Josef often gets his song ideas from everyday interactions or traditions held between his friends. Before the pandemic, a long-standing tradition for the band was to publicly jeer at movies on Five Dollar Tuesdays at the recently closed Starplex movie theater, a ritual that inspired the song "Five Dollars".

"Before the pandemic, every Tuesday we'd go at the latest showing for whatever the worst movie was out, and we'd do this every week," Hollar says. "So, on the 50th anniversary of Five Dollar Tuesday, we had like 55 people show up to this 11:11 p.m. showing of "The Sun is Also a Star." We snuck in a cake and these party hats and set up a table on the stage that's below the screen. It was really funny."

From writing lyrics in his bedroom to getting sweaty in his garage as he jams out with his band, Josef hopes to create an upbeat eclectic sound that resembles the alternative genre.

"That's the nice thing about making all your stuff in your garage, you don't really have to worry about following one sound or not," Josef says. "Indie rock is the easiest way to tell people, I guess."

"He is a great example of someone who is ultra creative and very willing to share with others and [is] very trusting," Hollar says. "He's very open about sharing things that he can create with others, which is rare because a lot of creative people try and keep it all close to their chest and never try to do things with other people."

The band hopes to continue making music together for as long as it can and share its music with anyone willing to listen. It also hopes the community will continue to support its work and passions.

"I've had a lot of friends that I've been able to collaborate with; it's been tight," Josef says. "I made a lot of very talented friends in San Marcos, so when you're with other people, you kind of work together to kind of change your sound, all fun stuff."

Josef released his second album, titled "Doomsday Disco," in January. Brown and the band are currently putting together music videos to promote its release. They are also working on trying to open for a concert at Stubbs Bar-B-Q in Austin. With the support of their fans, they hope to perform on a stage for the Austin City Limits music festival one day.

"If we get [to perform at Stubbs], that would be really cool," Josef says. "But ACL is like a milestone for us. We are determined to play...that would be a big one for us. We're a growing band, and we're trying to get our name out there. Opportunities like this are just super cool and we're super grateful."