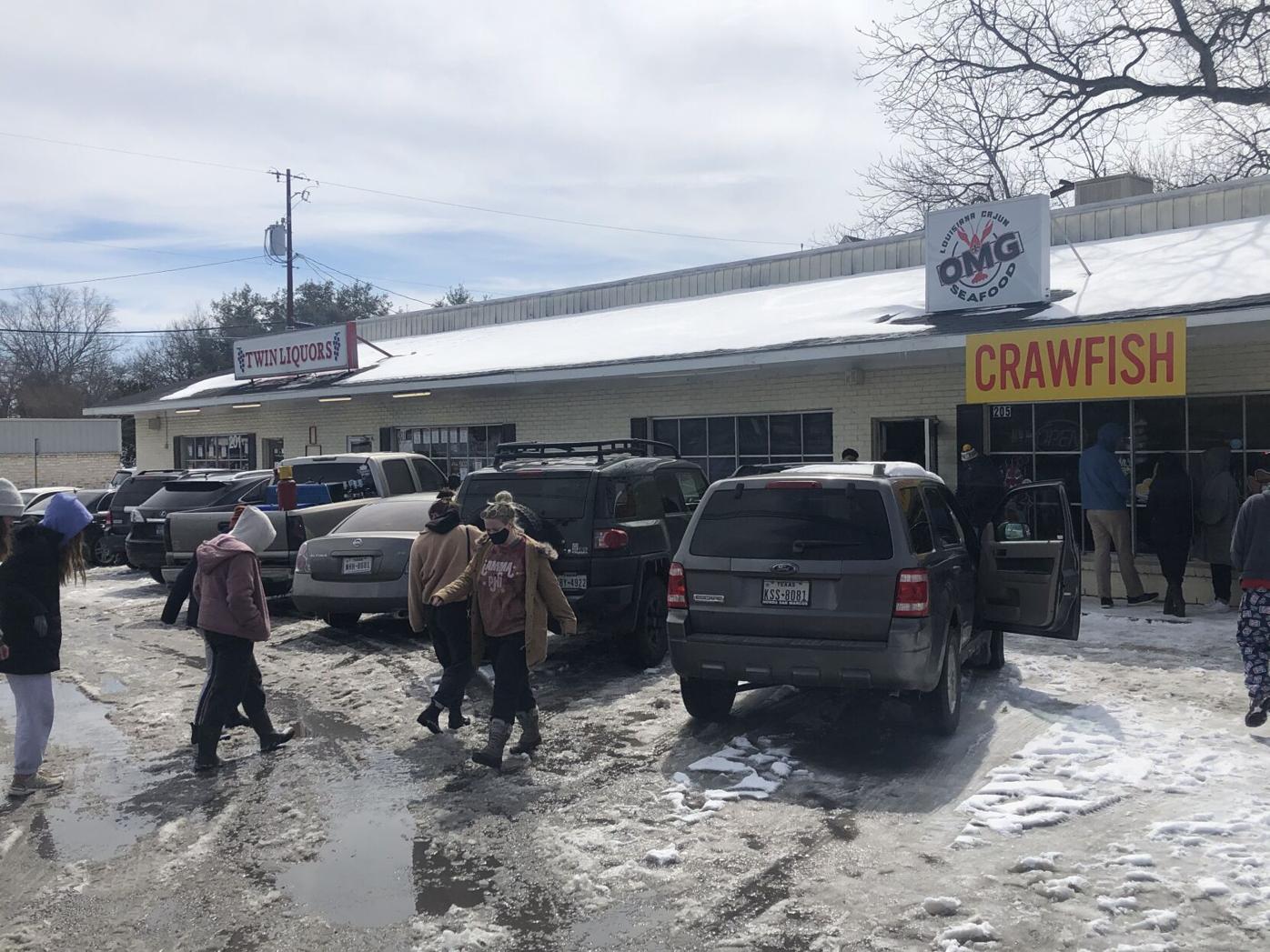 Customers walk in and out of OMG Seafood during the historic winter storm, Tuesday, Feb. 16, 2021, in San Marcos. 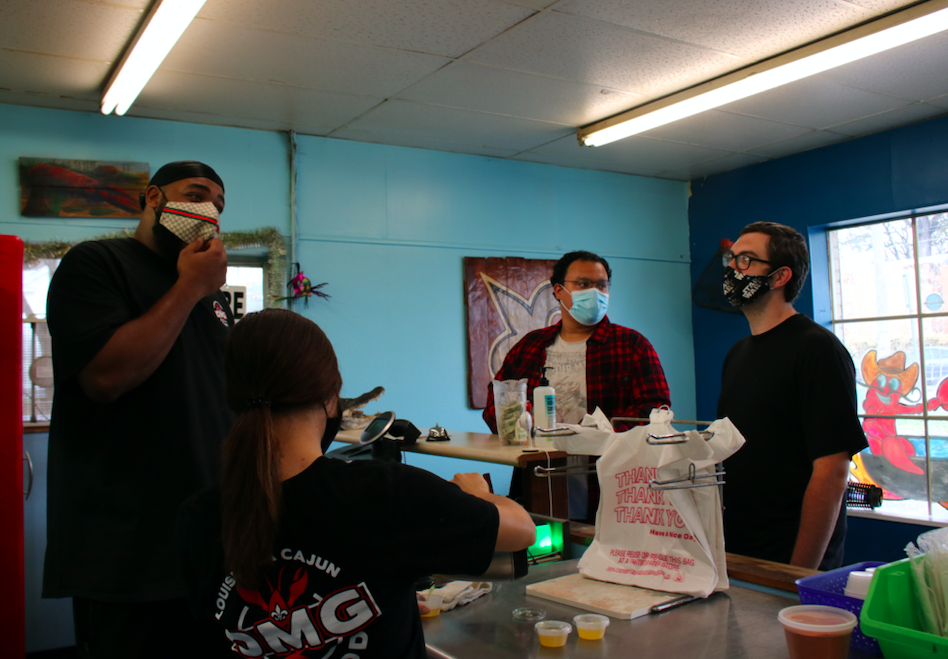 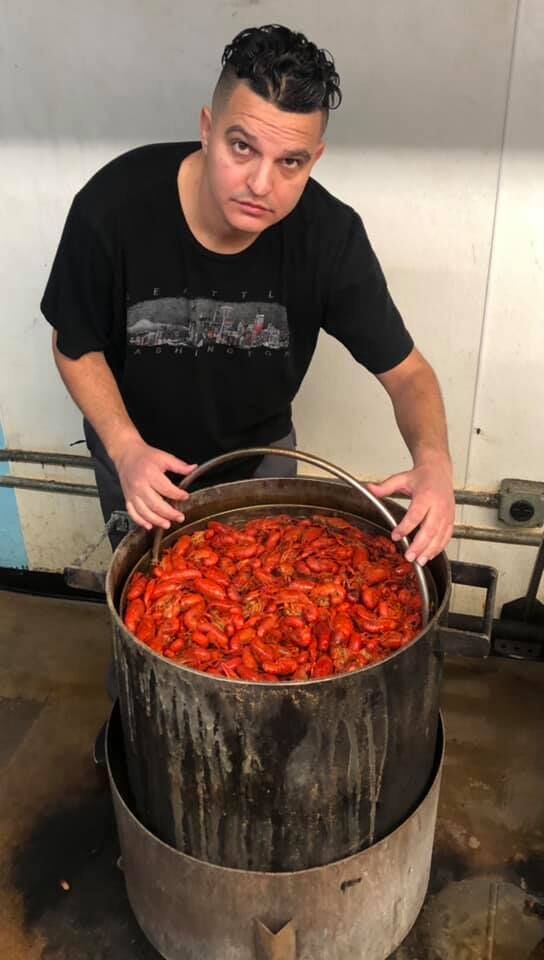 A day after Winter Storm Uri hit Texas, local business owner, Shane Billiot, like most San Marcos residents, woke up to sheets of white snow along the streets of his neighborhood and no electricity in his home.

Billiot immediately thought of his restaurant, OMG Seafood, located at 205 Moore St., which had pounds of live crawfish in its freezers and knew they would not survive for long.

Scrolling through social media, Billiot noticed the pleas of hungry students and San Marcos residents with no resources. He knew he had to help. On Feb. 16, Billiot took to Facebook to announce the opening of his restaurant and the surprise of free crawfish to the community.

"Honestly, God put it in my heart. I knew I had gas still, so, with that, I knew I had a bunch of live crawfish that I didn't know how long would be alive without electricity," Billiot says. "So, God put it on my heart that I needed to boil them up and just give them away."

With almost 800 shares on Facebook, Billiot gave away more than $12,000 in food between his establishments to feed nearly 1,000 people during the storm. In a Facebook post, Billiot writes, "difficult times like this is when the people with the means have an obligation to give back."

OMG Seafood specializes in Cajun-style seafood dishes from Louisiana. The restaurant's three pillars — serving good quality food for a decent price, coming as you are and creating a welcoming environment for customers — are what keeps the business afloat.

Billiot, a military veteran raised in a low-income household as a foster child, says he understands the struggles of food scarcity.

"I was in Afghanistan for a year, and seeing the poverty levels was just extreme, and when we go into the villages, we see all these children that weren't well-nourished," Billiot says. "So, I have compassion and empathy for people."

When the news of free, warm food spread, students and locals bundled up in layers and stood in lines circling the parking lot of OMG Seafood. As customers patiently waited, Billiot and his cooks were hard at work boiling nearly 100 sacks of crawfish despite frigid temperatures and periodical outages of their generators.

"I didn't really have any solid food throughout the entire storm," says Jose Loera, a Texas State student who visited OMG Seafood. "One of my floormates came knocking at my door telling me, 'Hey there's this place giving out free food if you want to come. It's gonna be a nice little walk in the snow, but you'll get some crawfish.'"

The wait was long and cold, Loera says, but he saw how hard the cooks were working to boil the crawfish.

"Every single time they would run out [of crawfish], they would boil some more. And when they ran out of crawfish, they started handing out catfish, which was awesome," Loera says. "The best catfish I've ever had, honestly. What they did was absolutely amazing. I'm super grateful."

Despite the high demand the employees faced, Joseph Daley, district manager of OMG Seafood, found the smiles on customers' faces worth braving the harsh weather.

"It was cold; I didn't have no lights; I had no water; I couldn't take a shower. I was like, 'Man, I really don't want to go up [to OMG Seafood],'" Daley says. "But I did and, at the end of the day, I felt really good about it. Everyone's smiling faces and stuff, you know, it was awesome."

Daley has worked alongside Billiot for eight years. While working together in Baton Rouge, Louisiana, the two men opened Craving Crawfish, a similar seafood establishment, and then headed to Texas to establish OMG Seafood in Bryan, Texas, and San Marcos.

"[Billiot] is a man who's not just my boss but my friend and my brother," Daley says. "I wouldn't know where I'd be right now if it wasn't for Shane."

During the storm, Michael Chatman, a cook at OMG Seafood, says he appreciated the people who filled the restaurant.

"I was stuck in the house, there was nothing to do, and, you know, it hit [Billiot's] heart. He felt that he wanted [Daley and I] to join him. And it made my week better," Chatman says. "That day felt like a party, like, I didn't know San Marcos was such a wonderful environment. I love it."

OMG Seafood's act of service received far more attention than Billiot and his employees ever anticipated. Not only have customers returned to pay workers back, but the overall business significantly increased at both locations.

"People are coming in a lot more, giving bigger tips to our staff and they're telling us how much they appreciate us," Billiot says. "It's definitely helped with traffic."

Billiot's southern hospitality and love for community date back to his roots in Louisiana. He says sharing his culture with the San Marcos community through his business is something that never fails to bring a smile to his face.

"In Louisiana, as part of our culture, we have crawfish boils like people have a big backyard barbecue," Billiot says. "It's a good time for community and fellowship, so when people come to my place, [OMG Seafood], I want them to feel like they're getting a little bit of that experience."

Carrying the values instilled in him throughout his unique life experiences, Billiot says the restaurant will make sure people who cannot afford food "get something to eat."

"You should always listen to your heart, to your intuition," Billiot says. "When you have the opportunity to do good for the community, you should choose to do right and do good because it comes back tenfold."

During the early hours of Dec. 4, 2017, Justin Putnam was finishing his shift at the San Marcos Police Department when Kenneth Copeland entered the briefing room he was in.

With rising heart rates and sweat sliding down their spines, the cast members of Texas State's spring musical production, "Spring Awakening," is exploring sex and sexuality while singing through masks, dancing across distances and adapting its timeline after a cast member tested positive for…