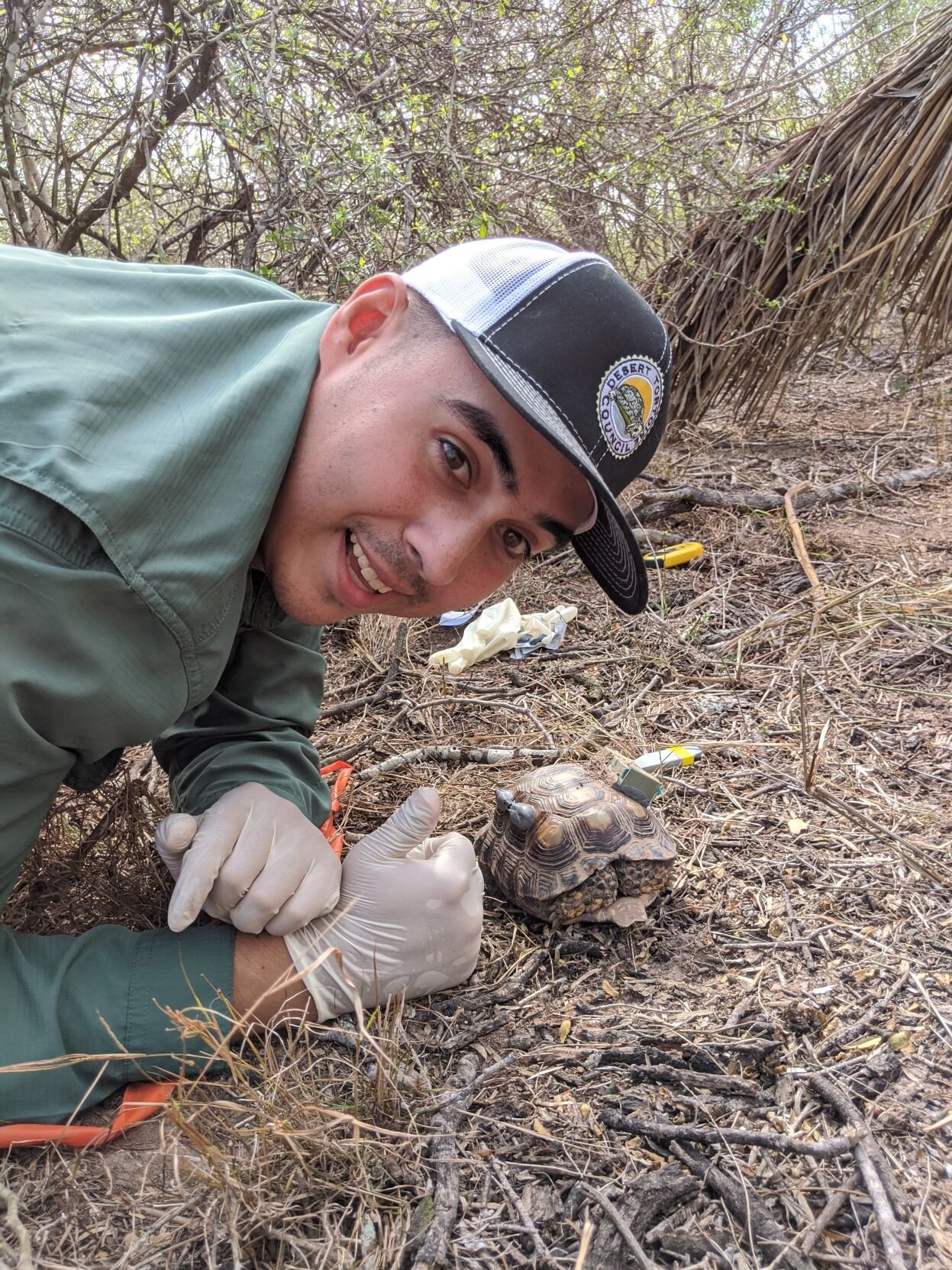 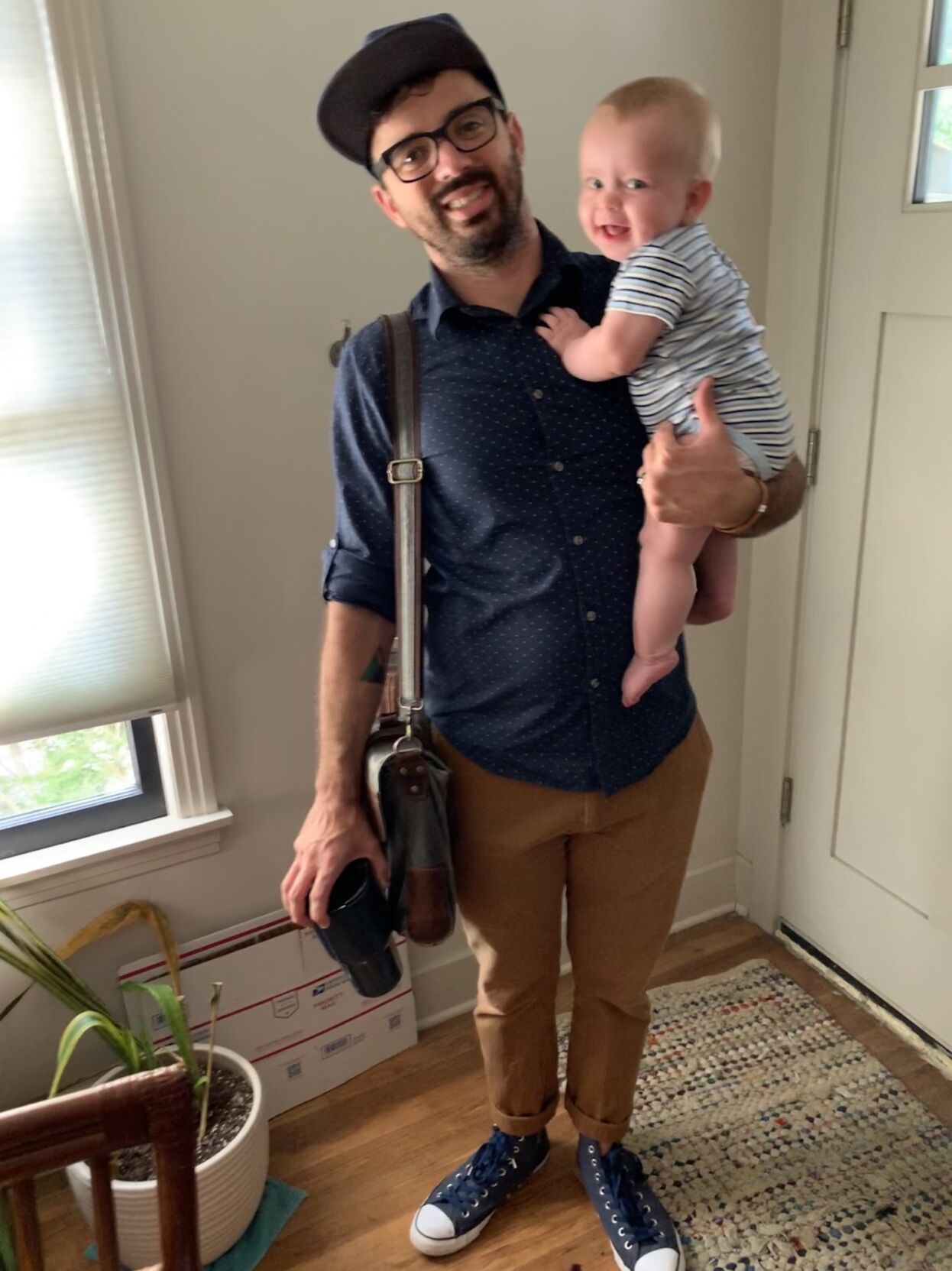 Lyle Blanco says bye to his son before heading to his first day of class as a graduate student in fall 2019. 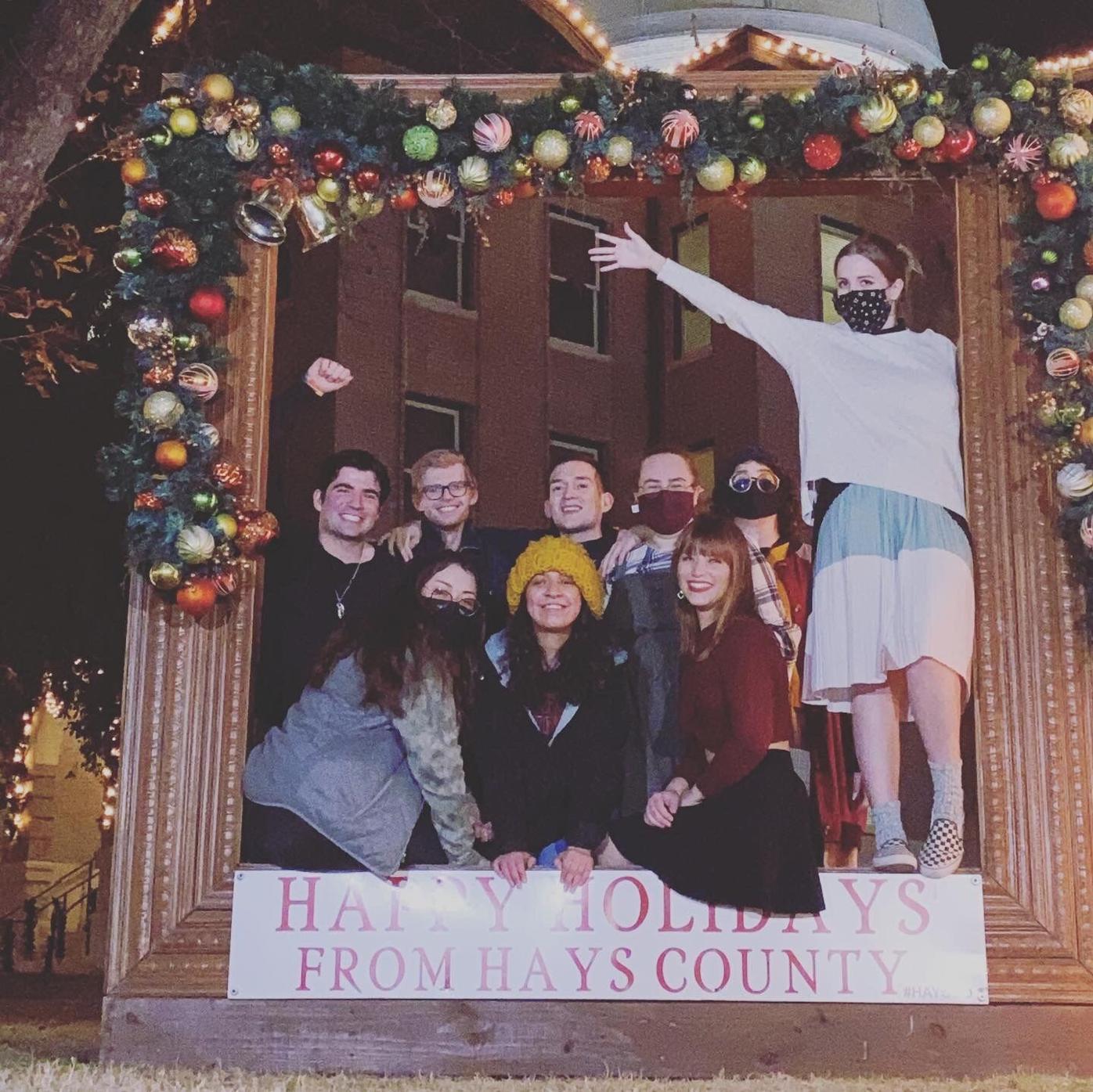 Sarah Tanner and other psychology graduate students pose for a holiday photo at the Hays County Courthouse, Dec. 12, 2020 in San Marcos.

The transition from undergraduate to graduate school is a huge step. There is more work, less structure and the ever-pressing dilemma of figuring out how to pay for it. These factors push some students to rule-out graduate school as an option; however, some view them as necessary obstacles in an ultimately exciting and rewarding endeavor.

According to the U.S. Census Bureau, around 13% of Americans hold a master's, professional or doctorate degree. For that 13%, graduate school can serve as a stepping stone to an otherwise unattainable career as a researcher, professor or a uniquely qualified leader in a specific field.

Then there are those who hope to stay in academia forever, like Daniel Guerra, an aquatic resources and integrative biology doctorate student. Guerra is studying the highly specialized field of ecology with a focus on Texas tortoises and their habitats. Much of the research he conducts is the first of its kind.

“Sometimes being like, ‘Oh yeah, I’m the one person doing research on this type of animal’ is really cool and really exciting,” Guerra says.

For Guerra, trailblazing has its perks, like having the highly unconventional graduate school experience of spending hours in the wild, tracking tortoises with a GPS and recording their every move.

Studying something without precedent presents its challenges too. With no protocols or best practices to draw on, Guerra has to rely on himself and his academic mentors.

"I have a lot of institutional support between my adviser and a couple of committee members who are external to the university," Guerra says. "[That's] part of why I decided to stay [at Texas State]."

For someone as passionate about their career as Guerra, the graduate experience at Texas State is something of a dream come true.

“Getting to go out there and [have] your animal in your hands, and working with them and feeling like you’re making a positive contribution really makes it all worth it for me,” Guerra says. “The idea that not only am I learning things, but I’m actively adding knowledge to the scientific community, however small that might be, is wild."

Guerra recognizes that not everyone is as dead set on graduate school as he always was early on. However, to those unsure about what they want to do, he recommends taking advantage of research opportunities and joining labs available to undergraduates at Texas State to discover what piques their interests.

“Lean on other grad students," Guerra says. "This is absolutely impossible to do on your own; I don’t care how smart [or] how hardworking you are. If you try to do this completely solo, you won’t be able to do it.”

Unlike Guerra, Lyle Blanco, a graduate public administration student, took an unconventional path before pursuing his graduate degree at Texas State. In the 10 years between his undergraduate and graduate career, he has gained work experience, moved across the country, gotten married and had a kid.

The decision to go to college at the undergraduate level felt somewhat obligatory to Blanco. That was simply what was expected of him at his age; however, he wanted his graduate experience to be different.

As the first person in his family to attain a master’s degree, he wanted to ensure his graduate experience was motivated by the right reasons instead of going “just because”.

“It took time for me to learn and figure things out,” Blanco says. “There’s some people who know what they want, and they’ll go straight from undergrad to graduate. That’s fantastic. Good on them. But if you don’t know, don’t do it.”

Blanco also warns against trying to "skate by" in graduate school like some may try to do in undergrad. Not only is it impossible, Blanco says, it is also not the point of higher education.

For those who have decided they are ready for the challenge of graduate school, the first big hurdle is the application process. A personal statement, letters of recommendation and the Graduate Record Examinations (GRE) are sometimes daunting.

“Submit and just go with it," Blanco says. "The best time to start something was yesterday; the second-best time is today.”

Somewhere in the middle of Guerra’s and Blanco’s experiences is Sarah Tanner, a graduate psychological research student whose path to Texas State was not a straight line.

As a pre-med major in San Antonio, Tanner realized she had a budding passion for psychology, but her career aspirations with a bachelor’s degree were limited. She found herself dreading having to take classes like statistics and research methods. Once she was actually in those classes, though, she found her true passion — research.

She pursued that passion by joining research labs, which only deepened her love for the field. Still, though, she was plagued by worries about whether graduate school was something she could handle and what a graduate degree in psychology would ultimately lead to.

“I started looking into grad school, [but] I wanted to be sure,” Tanner says. “It’s a path that definitely requires a lot of self-motivation. You have to really look within yourself and be like, ‘Is this what I want?'"

Tanner recognizes that she is not the only person to contemplate such a decision. There is immense internal and external pressure placed on graduating college students. At the end of the day, though, pursuing a graduate degree is a personal decision.

“It came down to really looking within myself and being like, ‘This is what I want to do,' and having to be very cognizant that this was going to be hard, and I’m going to face rejection and difficulties,” Tanner says. “But I know it’s possible with the right schooling, the right people and the right encouragement. I will find a way to make it happen.”

While attending graduate school is not on the mind of every undergraduate junior or senior at Texas State, Tanner encourages uncertain students to not allow feelings of imposter syndrome — feeling like one does not belong — steer them away from something that will ultimately be worth it.

“You are capable," Tanner says. "It’s not easy and it takes work, but anything in life worth doing usually does; if it’s what you really want to do, you can definitely do it.”