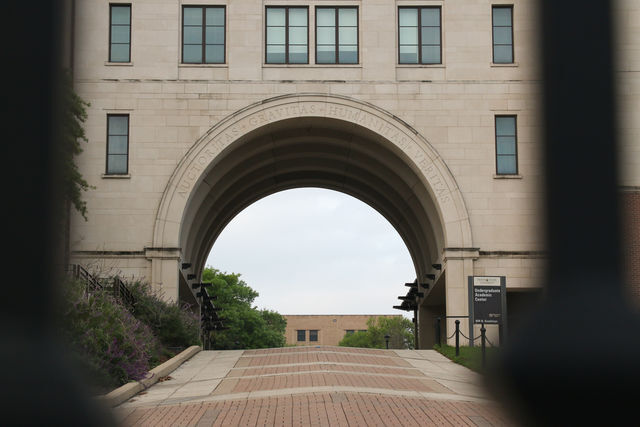 Texas State’s Clery Act Annual Security and Fire Safety Report for 2020 revealed an increase in reported rapes and burglaries on campus in 2019. The new report comes after a controversy involving the university's instances of misreported crime data, which stretched as far back as 2014. 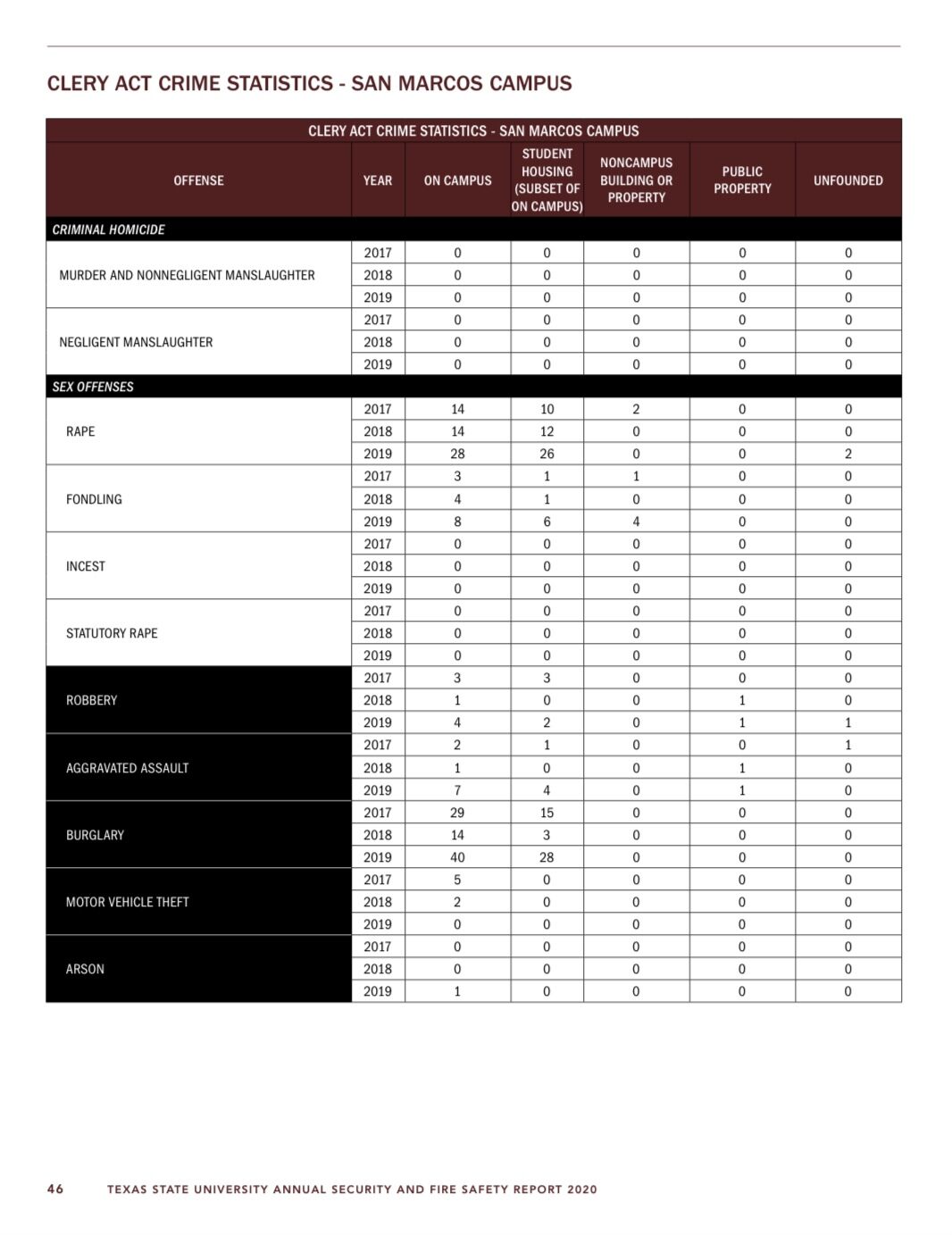 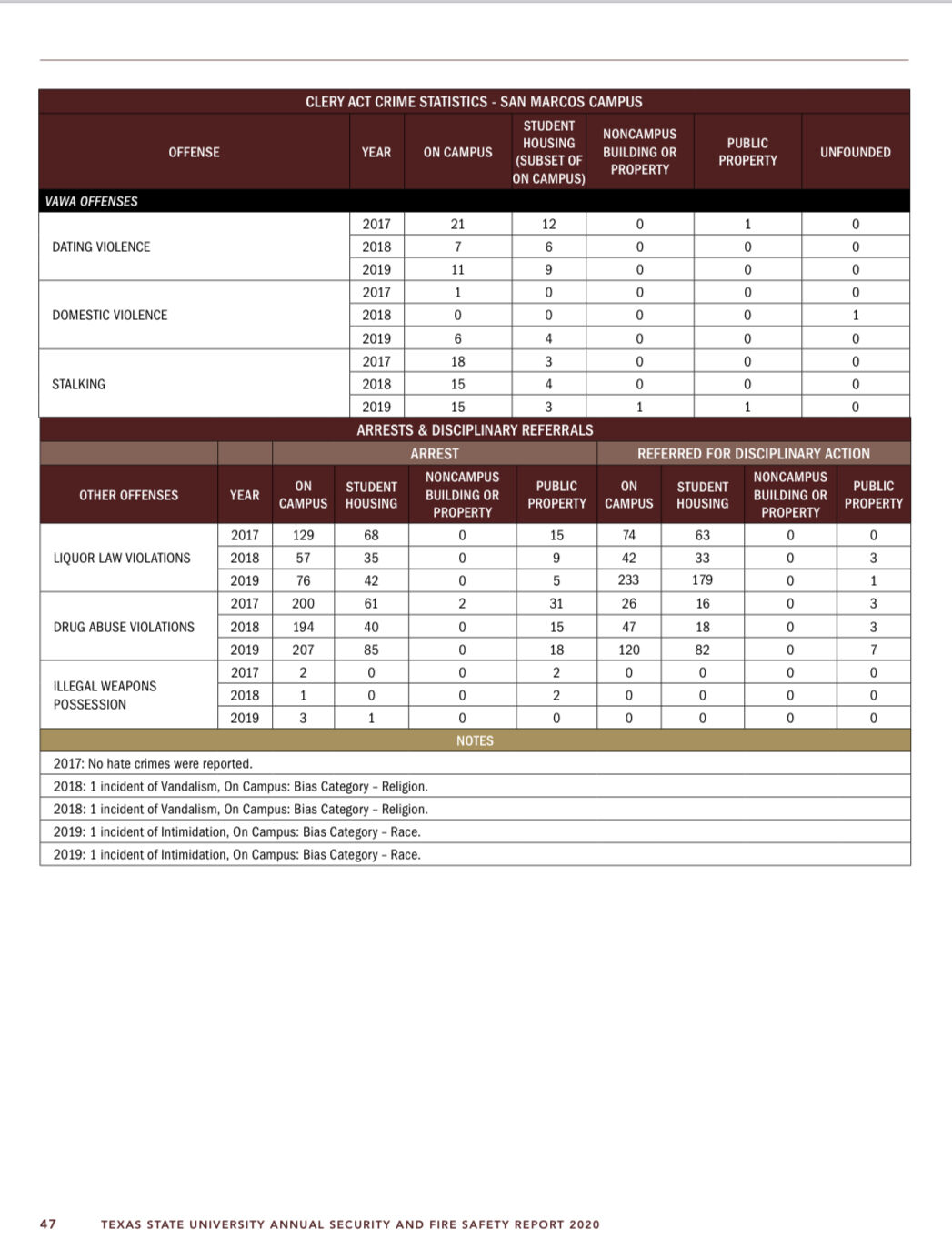 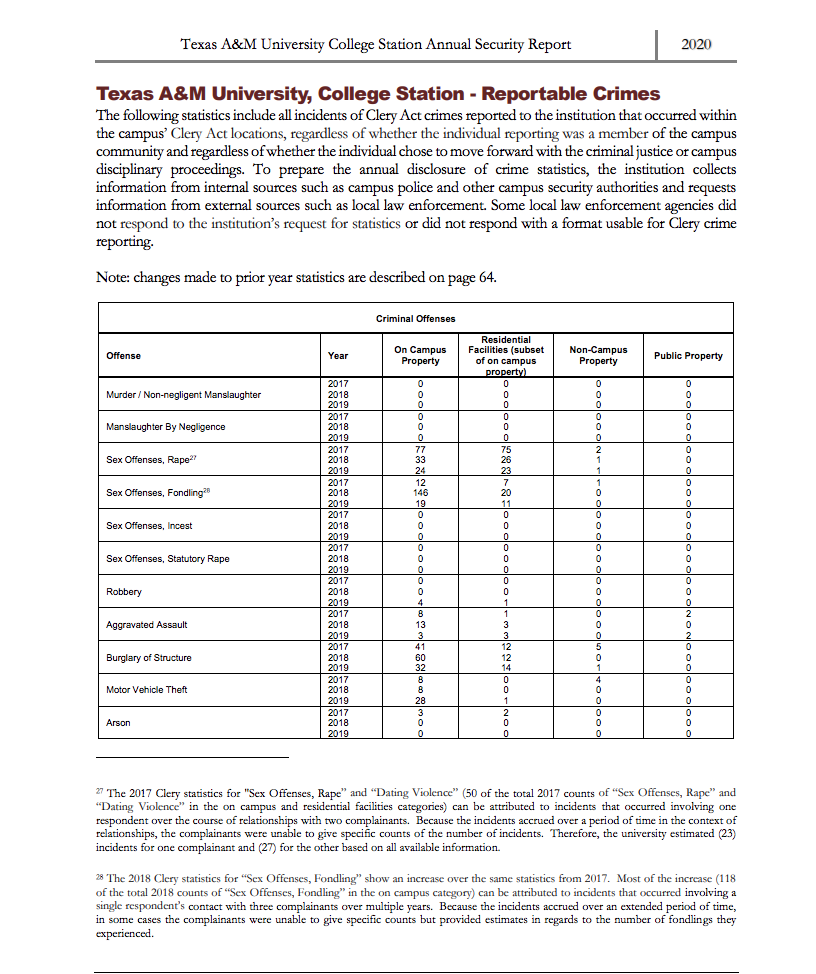 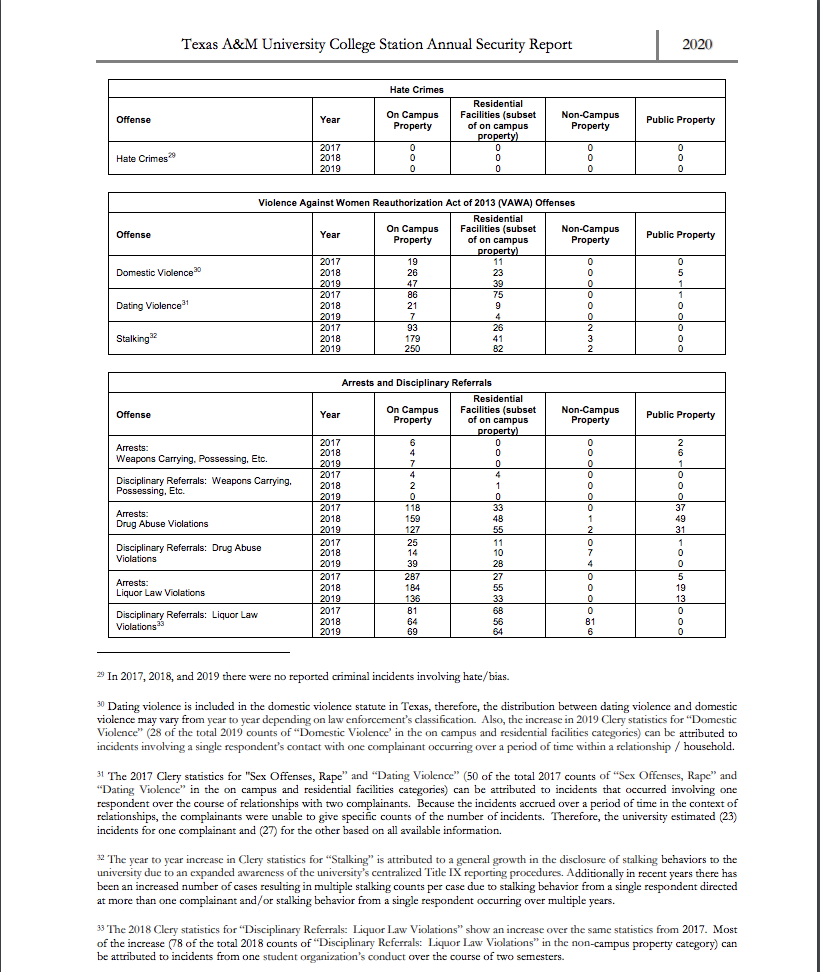 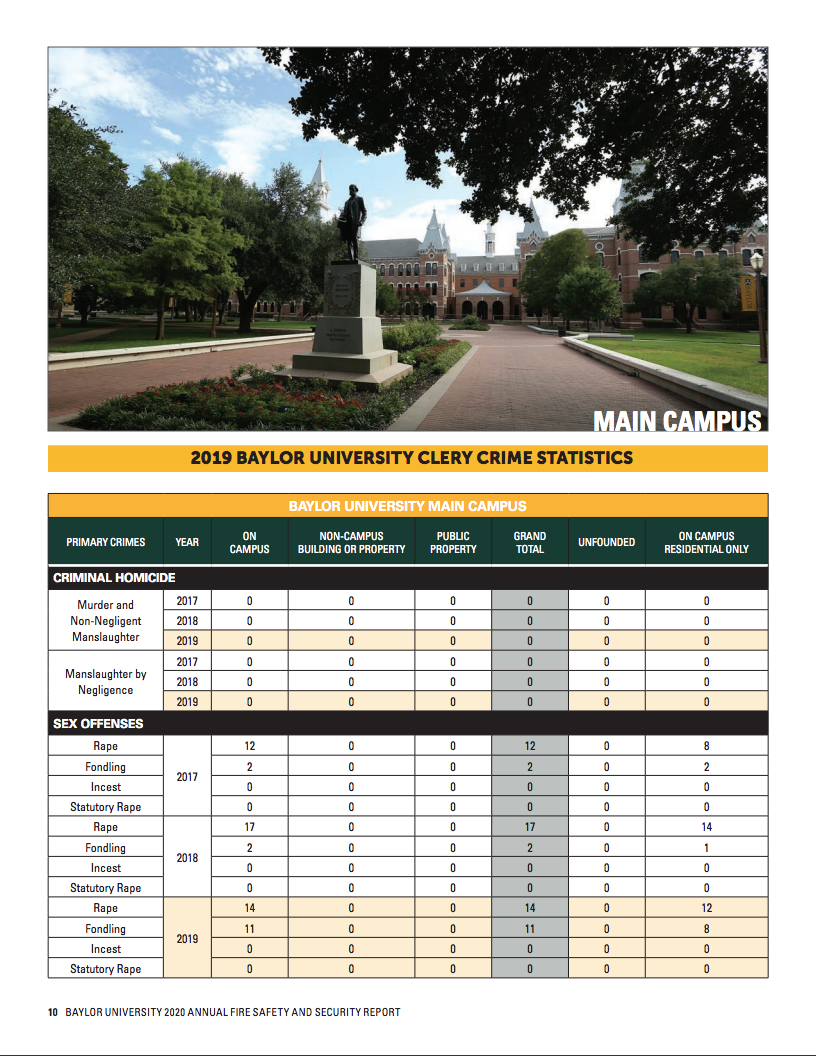 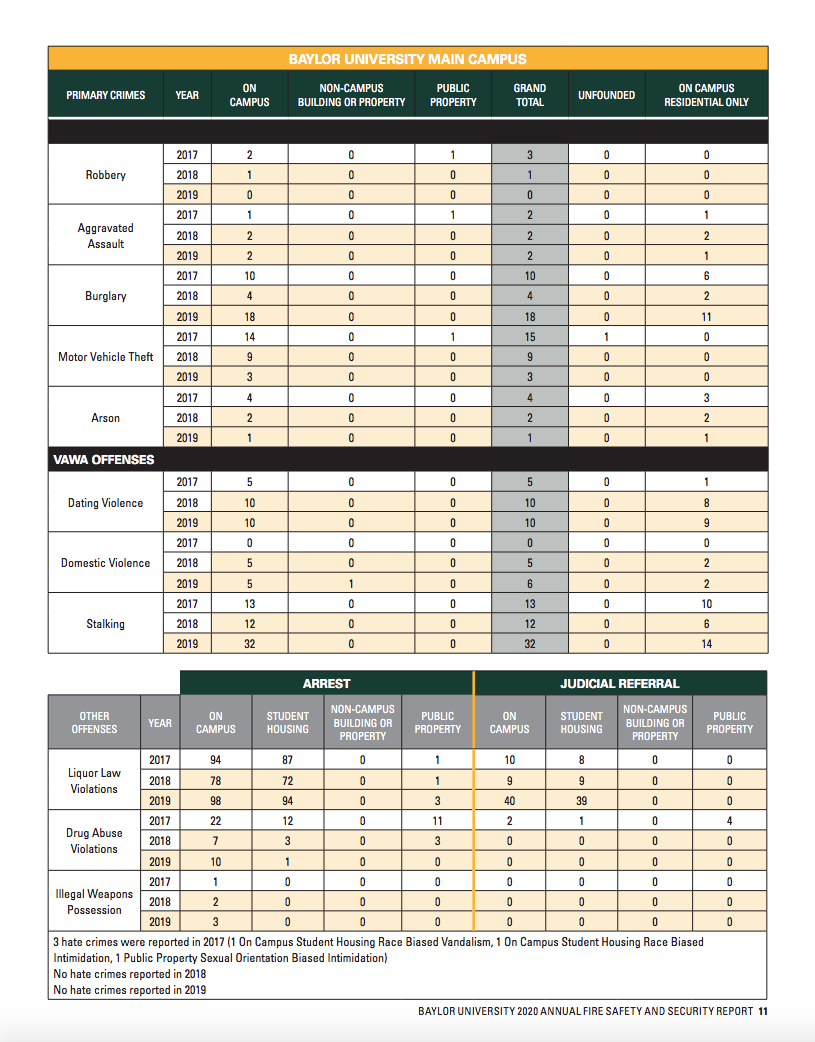 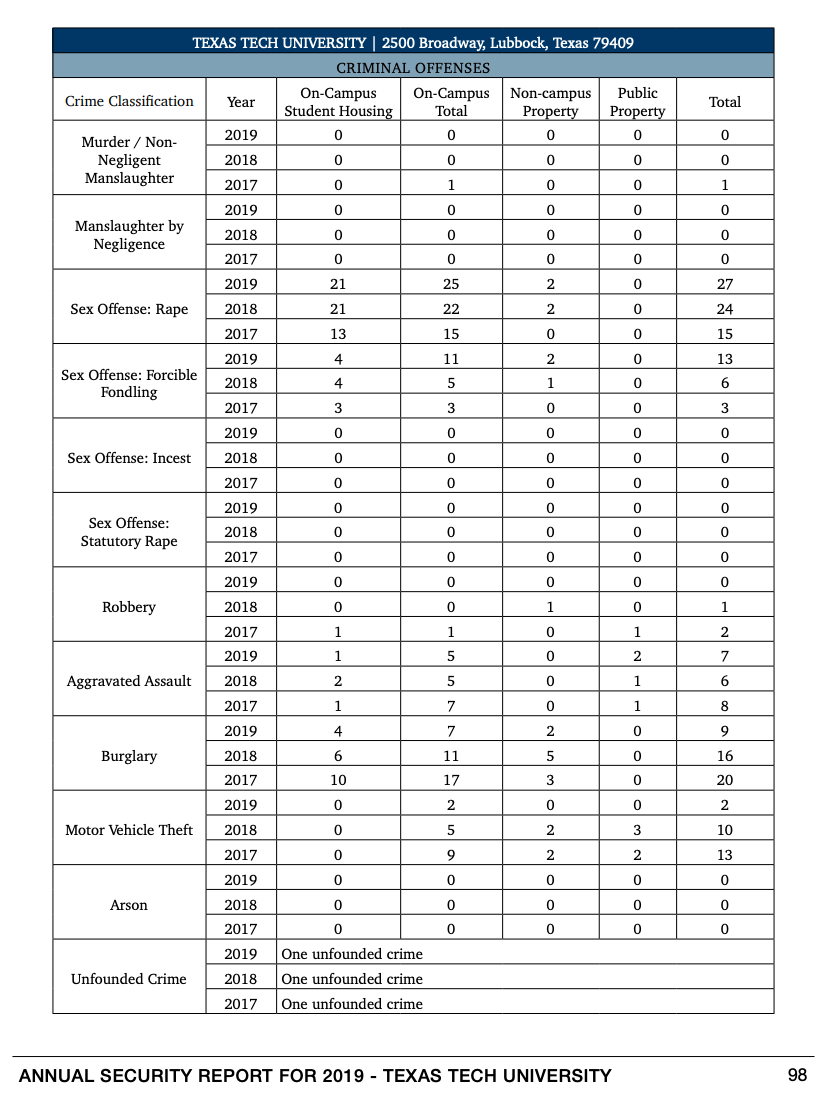 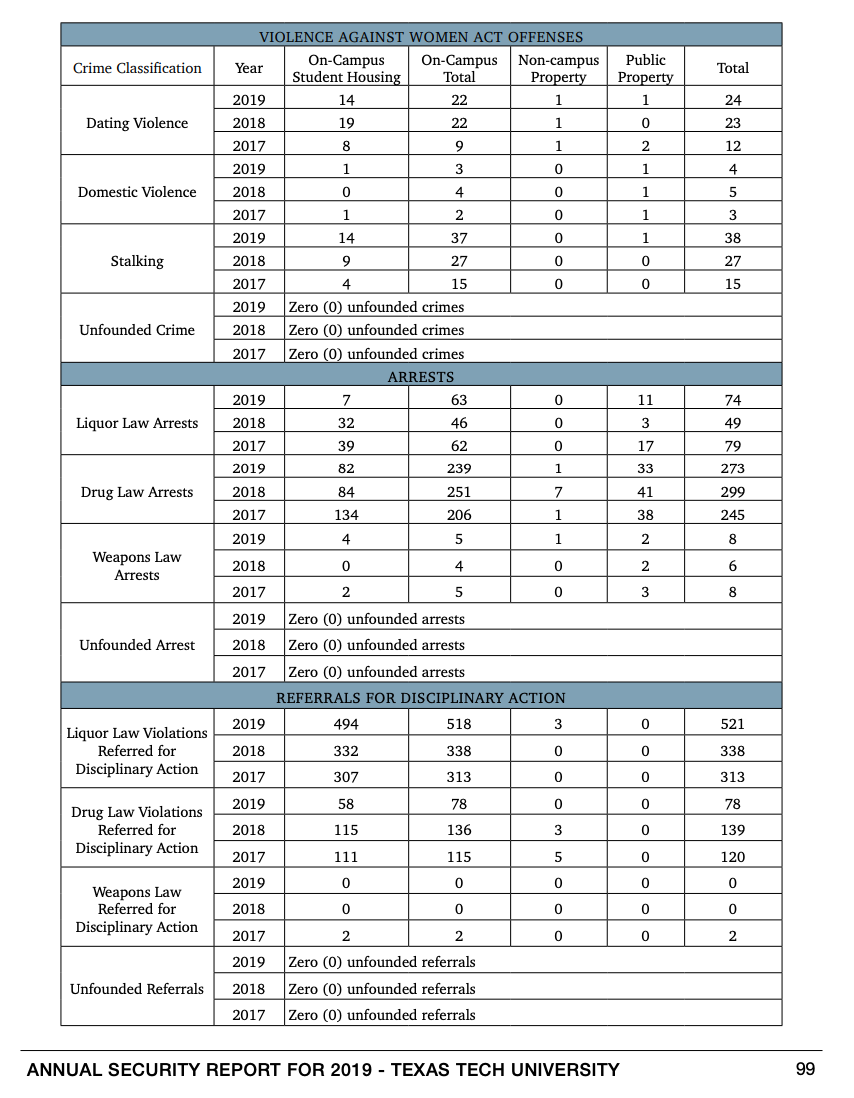 Texas State’s Clery Act Annual Security and Fire Safety Report for 2020 revealed an increase in reported rapes and burglaries on campus in 2019. The new report comes after a controversy involving the university's instances of misreported crime data, which stretched as far back as 2014.

Texas State’s Clery Act Annual Security and Fire Safety Report for 2020 was published Dec. 7, revealing an increase in reported rapes and burglaries on campus among other crime data.

The Clery Act requires institutions participating in the Federal Student Aid program to disclose campus security policies and crime statistics over the previous three years in a document called the Annual Security and Fire Safety Report.

Due to the COVID-19 pandemic, the U.S. Department of Education's Office of Postsecondary Education extended the deadline for this year’s report from Oct. 1 to Dec. 31.

The report shows rapes reported in 2019 were double the amount of 2018’s numbers for a total of 28. Contextually, that number is the same as 2017 and 2018’s numbers combined. The burglaries reported for 2019 show 40 burglaries, an increase of 26 from 2018’s numbers. There were zero reported crimes on the Round Rock campus.

There were 207 arrests issued for on-campus drug abuse violations in 2019, an increase from 194 the previous year, while the arrests in student housing sat at 85 compared to 40 the year before.

“I’m not sure there’s been necessarily an increase [in crime], but the numbersare reflective of more robust data analysis,” said Laurie Clouse, University Police Department chief. "I would say there’s not more of those crimes happening. It’s just that we are capturing more of them because our collaborative efforts with Kristina Morales’ office.”

The Clery Compliance Committee is comprised of a team of stakeholders from offices and departments within the university, while the Data Integrity Subcommittee is made up of UPD, Title IX, Department of Housing and Residential Life, Student Conduct and Community Standards and Student Involvement. Mason says frequent audits and updates have been effective in keeping checks and balances between the two.

“Reviewing a year's worth of reports is a massive undertaking. A benefit going forward is because we already have this Data Integrity Committeecomprised of individuals who are sitting in these departments and seeing these reports frequently, they will be able to do all the recording, reviewing and analysis in real-time to determine whether something is Clery reportable,” Mason said. “At the end of every month, they’ll send reports to Kristina who will, again in real-time, be auditing and reviewing. So, when we get to next August or September, when we get ready to start working on publishing next year’s report, we will have the data audited and done.”

“Margolis Healy plays a major role,” Morales said. “For this report, after I reconciled the data gathered by the Data Integrity Subcommittee, we had Margolis Healy and Associates audit the entire 2019 calendar year. Once they completed that, we were able to finalize this year’s report.”

The delayed report follows a controversy involving Texas State’s instances of misreported crime data, which stretches as far back as 2014. After a peer review performed by the International Association of Campus Law Enforcement, administrators uncovered deficiencies in Texas State’s 2016-2017 crime statistics, leading to crucial changes to the university’s operation for its Clery reports.

When the misreporting was discovered, The University Star identified 24 crimes, within the date range of reportable dates from 2014-2016, labeled as sexual assault that were Clery reportable and uncategorized into the four sexual offense categories: Rape, fondling, incest and statutory rape. For those same reportable years and offenses in the given date range, Texas State reported only 15 such offenses in the sexual offense categories.

The changes occurred following the appointment of Clouse in February 2019 and her formation of the Clery Compliance Committee in March 2019, as well as the recruitment of Morales and Mason in February and May 2020,respectively; each has shaped and established the committees in place today.

Before the arrival of Clouse as chief and Mason and Morales Clery compliance specialists, the university opted to review crime numbers at the end of the year without heavily involving committees or firms—a differentprocedure as opposed to the contemporary continuous review style.

Currently, the DOE is performing an off-site campus crime program review of the university’s Clery compliance. According to Clouse, this is a review that continues to this day and will determine whether or not previous misreporting will result in a fine.

The Department of Education’s Clery Center can issue fines north of $50,000 per Clery Act violation, depending on its investigative findings.

Struggles with mental health in college, where students are tasked with finding their personal identity while transitioning into full adulthood, is no stranger to student-athletes who have Herculean responsibilities placed upon them after signing along dotted lines.