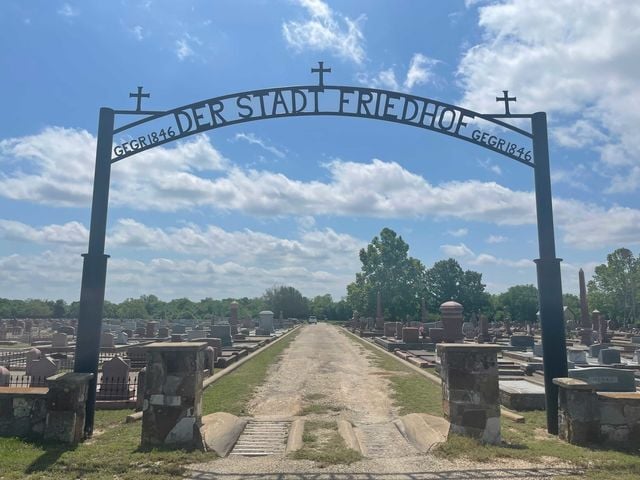 Graves at the front entrance of Der Stadt Friedhof Cemetery, Saturday, May 8, 2021, in Fredericksburg, Texas. 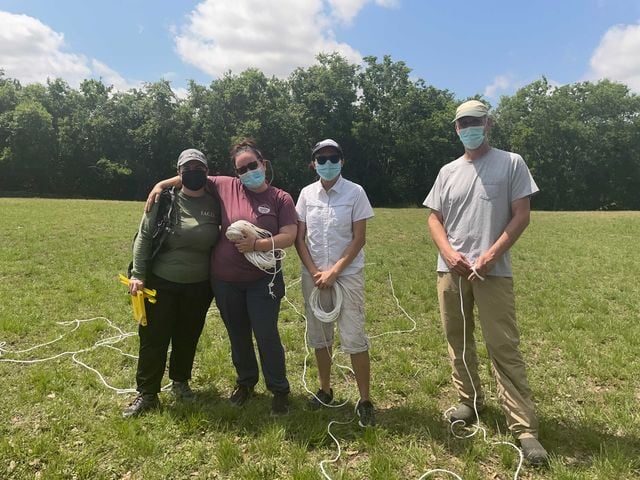 Phillips III, a Texas State alumnus, has a family history dating back to the early 1860s and seeks to discover more about those who came before him. His interest in partnering with the university began in 2019 after a conversation about the university's anthropology department with Texas State Provost and Vice President for Academic Affairs Gene Bourgeois.

During this conversation, Phillips III shared details of his family’s history in Fredericksburg and its relation to the Black cemetery.

Der Stadt Friedhof, which is German for “the city cemetery,” was established in 1846, the same year the town of Fredericksburg was founded. Phillips III says the town is mostly known for tourism, German culture and vineyards in the area.

“Fredericksburg is traditionally known as a German community because they had German settlers that moved here in the 1840s, but before the Germans, there were other communities that lived here in this area,” Phillips III says. “The history of Fredericksburg, especially in regard to the story of African Americans here, has not been told. When I moved back here in 2015, part of my mission was to make Fredericksburg aware that there was more than just Germans here.”

Phillips III's knowledge of the history of his family and cemetery inspired Bourgeois to request the anthropology department to take on a new project. The project consists of mapping the cemetery on a small portion of land in the back of Der Stadt Friedhof.

The main goal of the project is to diagram the cemetery plots and markers. The department also hopes to perform geophysical prospection of the many open areas in the cemetery and surrounding walled area. Additionally, the department seeks to search for indications of unmarked graves and identify them.

Phillips III believes it is important to acknowledge underrepresented communities in Fredericksburg. By taking on this project, he feels he may be able to spur interest in the upkeep of the Black cemetery and its burial records.

“African Americans that lived, worked, played, married and raised families here are buried in that cemetery,” Phillips III says. “There's no real good records in the courthouses that talk about deaths and burials, part of this project is to get a real written history. We deserve a permanent history of Black people in this cemetery.”

Because of the unknown origin of the Black portion of the cemetery and the poor upkeep of records, Phillips III speculates there may be several unmarked graves present in the space.

“Many of the graves are not well preserved, we can see some that have little metal plaques that are hard to read, and then there's others that are just rocks," Phillips III says. "Some of them are small, like children, some of them are adult-sized, so I’ve always wondered if there were other African American people buried in the cemetery that had rocks or wooden markers that have disappeared.”

While there isn't a guarantee that found bodies can be identified, Phillips III holds onto hope that families of those deceased will one day have the ability to pay their respects.

Phillips III suggests unmarked graves could belong to people who were enslaved, noting that before the end of the Civil War, a large farm in the county was the property of a family that enslaved people. He says the only slave plantation in the area was located in Gillespie County, 30 miles away from the cemetery.

"We also have to consider that there were slaves that came here free after the Emancipation Proclamation to start new lives," Phillips III says. "So, there's a vast amount of potential to discover this past history that's been quiet for years.”

He says one of the headstones in the cemetery is of a lady named Millie Tinker, who died at 120 years old. Phillips III adds she's one of the oldest people buried at the cemetery and he believes she might have been enslaved.

Nicholas Herrmann, a professor of anthropology, along with Adrienne Stainton and Kaylee Gaumnitz, two graduate students in the Department of Anthropology, are members of the cemetery project team. Herrmann says he is enthusiastic to start the project and to collect data without causing any changes to the cemetery.

“What we're trying to do is make sure that everything we do right now is non-destructive and has no impact on the cemetery,” Herrmann says. “To do that, we're doing low-altitude drone imagery."

This imaging involves taking low-altitude, aerial images and creating detailed maps of the area. The team will also use ground-penetrating radars and magnetometers to scan the area.

Herrmann believes using a variety of techniques to survey and collect data of the cemetery leads to a better chance of discovering unmarked graves and will provide informative and helpful reports that will be useful to the Texas Historical Commission since the organization would like to keep track of research work done in historic cemeteries.

Sophia Mavroudas, a coordinator of the Forensic Anthropology Center at Texas State, says this project is a great way to get hands-on experience with the different specialized tools Herrmann and his team use on projects.

“I started coming out in April and learning how to use different kinds of equipment. It’s pretty specialized equipment; not a lot of people know how to use it efficiently, so it's good practice,” Mavroudas says.

Mavroudas, like Phillips III, finds the layout of the cemetery interesting. She is also fascinated in finding out whether or not there may be unmarked graves, noticing the wide-open spaces across the land.

From his observations, Herrmann agrees there may be many unmarked graves in the cemetery; however, he notes these potential graves may be difficult to analyze or test depending on the efficacy and reliability of the equipment used.

"I haven’t seen anything in the data we've collected so far that I can definitively say that," Herrmann says. "The only way you're really probably going to confirm that is if you actually do some sort of testing where you're either digging down and confirming that it is a grave. We're ultimately not going to do that as per the rules and regulations concerning [the] cemetery.”

The various materials used to bury people in the 19th-century, in combination with the many decades that have passed, challenge the team when it comes to searching for unmarked graves deep within the earth.

“When you think modern burial today, where you have a bolt and a very substantial coffin, the signal that comes back from those is really strong, and you get a really clear picture of a grave," Herrmann says. "But, if you're talking about 1800s wooden style coffins that have potentially decomposed over years, they’re not going to provide a very strong signal that you're going to see.”

Herrmann feels this project is critical to complete due to the lack of historical records kept on the Black community of Fredericksburg. He believes, like Phillips III, the history and lives of African Americans in the town deserve to be recognized and preserved.

Although his team is only dealing with the mapping and data collection of the cemetery, Herrmann is looking forward to the completion of the project and seeing it come to fruition.

"Our component is a small aspect of a much larger project that involves a lot of other types of research but is still very important. We’re starting it off, and then others can take up other aspects of it and move forward,” Herrmann says.

The Phillips family has resided in Fredericksburg for more than 150 years, during which Phillips III's great-grandfather and grandfather were local veterinarians. Although his father, Paul Phillips Jr., had written and documented the family’s early history in a 100-page family story titled “The Phillips Legacy,” there is still much to their family story that remains unknown and undocumented.

“So much of the people of color’s history was not and has not been written; it's not in the history books. Even though African Americans and Hispanics worked and owned land here for years and years before the Germans came, it’s just not acknowledged,” Phillips III says.

Phillips III believes that although the project is quite time-consuming and extensive, with the help of researchers, such as those in the anthropology department, the results will provide a more comprehensive and accurate account of Black history in Fredericksburg.

Phillips III says the main reason he decided to take on this project is to leave a legacy for his children.

“I have four children, and until we moved back here to Fredericksburg, they really didn't know any of our family history,” Phillips III says. “We learn from our past, and we build on it, and I want my children and their children to know the significance of this little town called Fredericksburg. But I also want the history books to make mention of the people and communities that lived here, besides just the Germans.”

Phillips III credits his success to his family members who came before him. By taking on this project, he believes justice and recognition will be brought to his family.

“I think that knowing the history of your family brings fullness to you as an individual and realizing that is important,” Phillips III says. "I stand on the shoulders of my mom, my dad, my grandfather, my grandmother, my great-great-grandfather and so on. Those are the ones that pave the way and their stories aren't told, and I want to change that.”