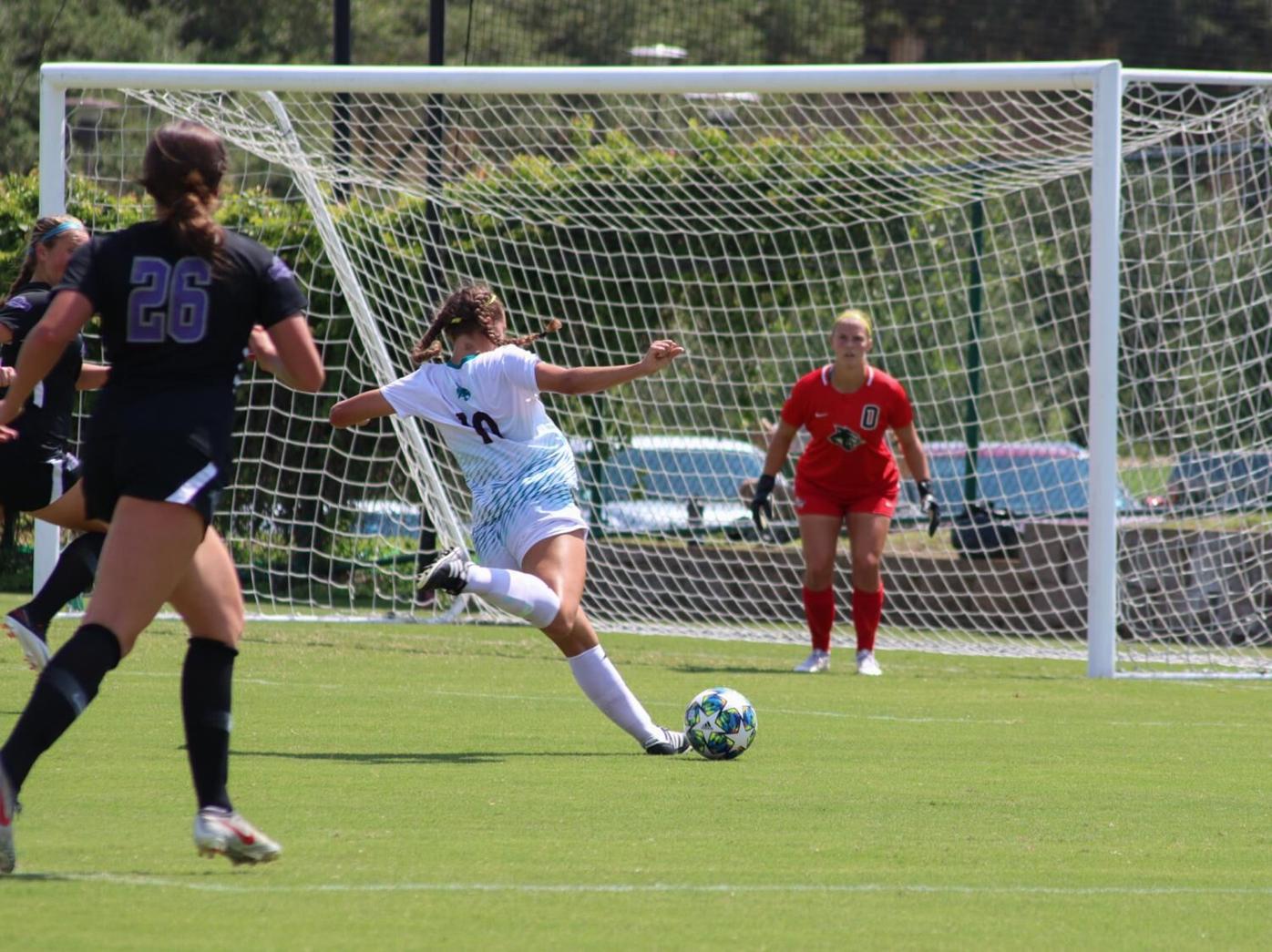 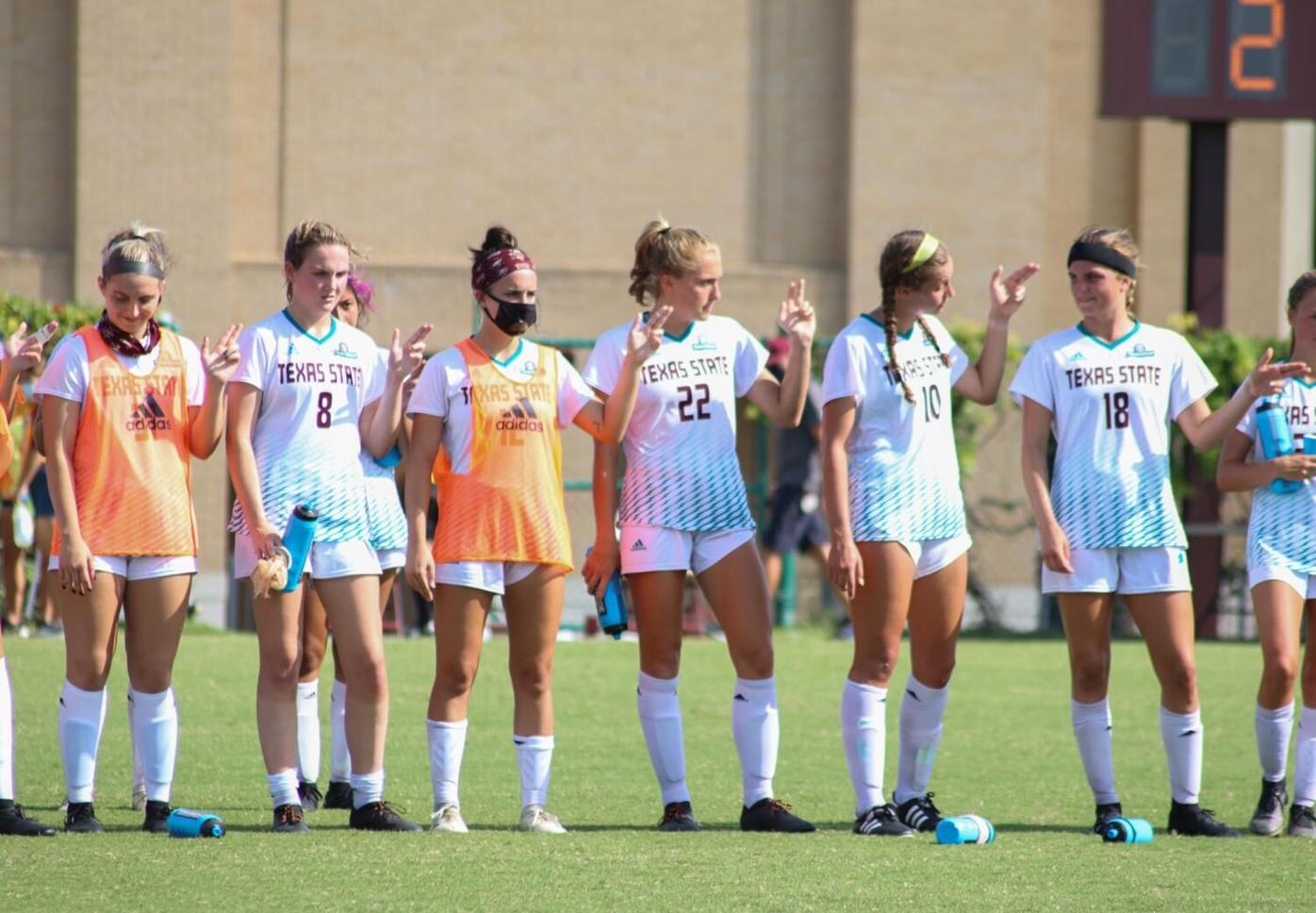 Texas State’s soccer team stands in front of the crowd at the conclusion of the game against Abilene Christian, Sunday, Sept. 13, 2020, at the Bobcat Soccer Complex. Texas State lost the match 2-3 in overtime.

Texas State’s soccer team stands in front of the crowd at the conclusion of the game against Abilene Christian, Sunday, Sept. 13, 2020, at the Bobcat Soccer Complex. Texas State lost the match 2-3 in overtime.

Texas State soccer lost its Sept. 13 match against the Abilene Christian Wildcats, leaving the Bobcats’ record at 0-3-1 for the season.

Texas State put up a fight against the Wildcats but fell short after the game went to overtime.

Texas State started the game off strong in the first half with sophomore forward/midfielder Kiara Gonzales scoring the first goal off an assist from senior midfielder Renny Moore. Wildcats’ senior forward Christina Arteaga responded shortly after with a goal of her own.

Gonzales’ goal marked the first points of her collegiate career.

“When I came in we were just coming off of water break; I just felt like us coming in, I need to bring the energy and anything to get us back into the game,” Gonzales said. “I saw the perfect opportunity to come in, and I timed the run, and I put the header in and that collectively just brought us all together”.

The Bobcats finished the first half of the game trailing the Wildcats 1-2 after a goal from ACU sophomore forward Jordan Michie.

Soccer Head Coach Kat Conner felt the game was one of the better ones of the season thus far.

“I felt like the kids played really well in the first half,” Conner said. “They did exactly what we asked them to do. Unfortunately, we didn’t put any chances away we should’ve”.

The Bobcats leveled the score in the 75th minute off a goal by senior forward Sydney Kammer assisted by freshman forward Olivia Wright. This gave Kammer a career-high six shots.

“I’m just glad I could get that goal for them and put us back in the game,” Kammer said. “It’s been amazing; I love every minute of it. Every minute is treating it like it’s the last because you never know what’s going to happen with the times we’re living in right now”.

The Bobcats moved on to experience their third overtime of the season. The overtime period ended with a goal to the upper right corner by ACU junior defender Ellen Joss after a deflection off the Bobcats.

“That’s extra reps and extra minutes; we get a week to come back and train and get our legs back underneath us,” Conner said. “Not to mention it [gives us the opportunity to put] extra players into the game; anytime we can get more reps right now before conference I’m all for it”.

The Bobcats take on Central Arkansas Bears at 7 p.m., Sept. 18, at the Bobcat Soccer Complex.

Struggles with mental health in college, where students are tasked with finding their personal identity while transitioning into full adulthood, is no stranger to student-athletes who have Herculean responsibilities placed upon them after signing along dotted lines.