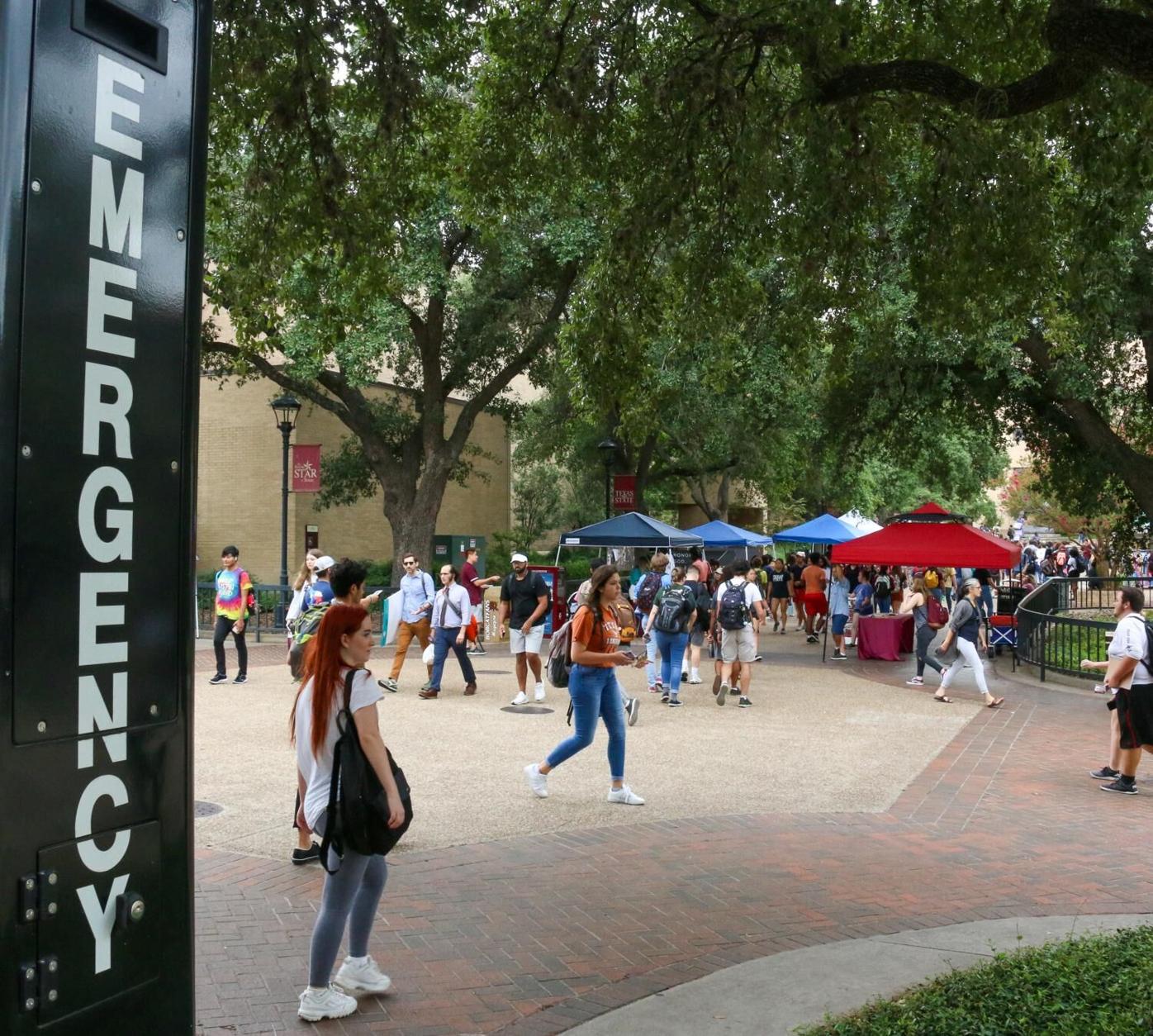 Texas State students walk in between classes, Tuesday, Sept. 17, in the Quad. Photo by Jaden Edison. 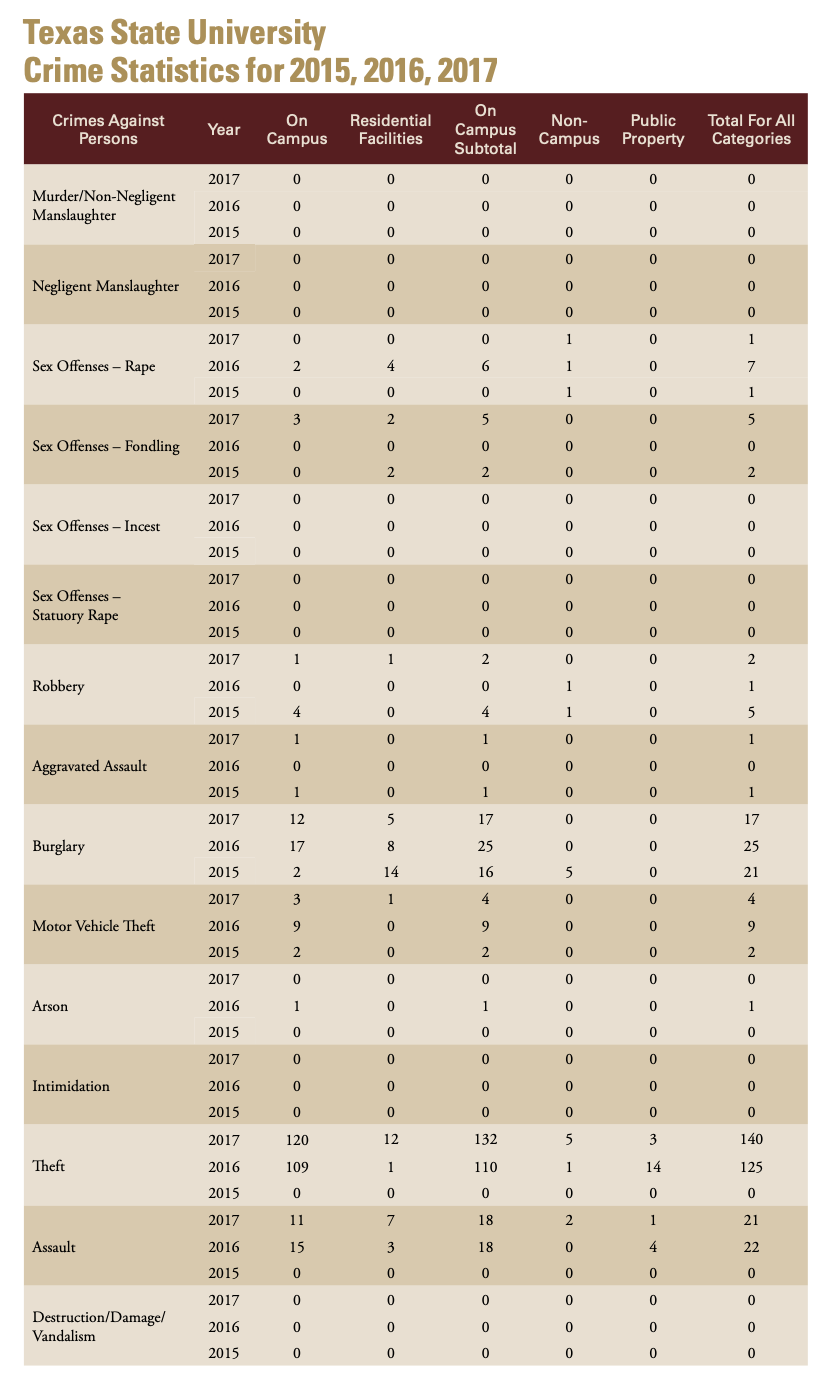 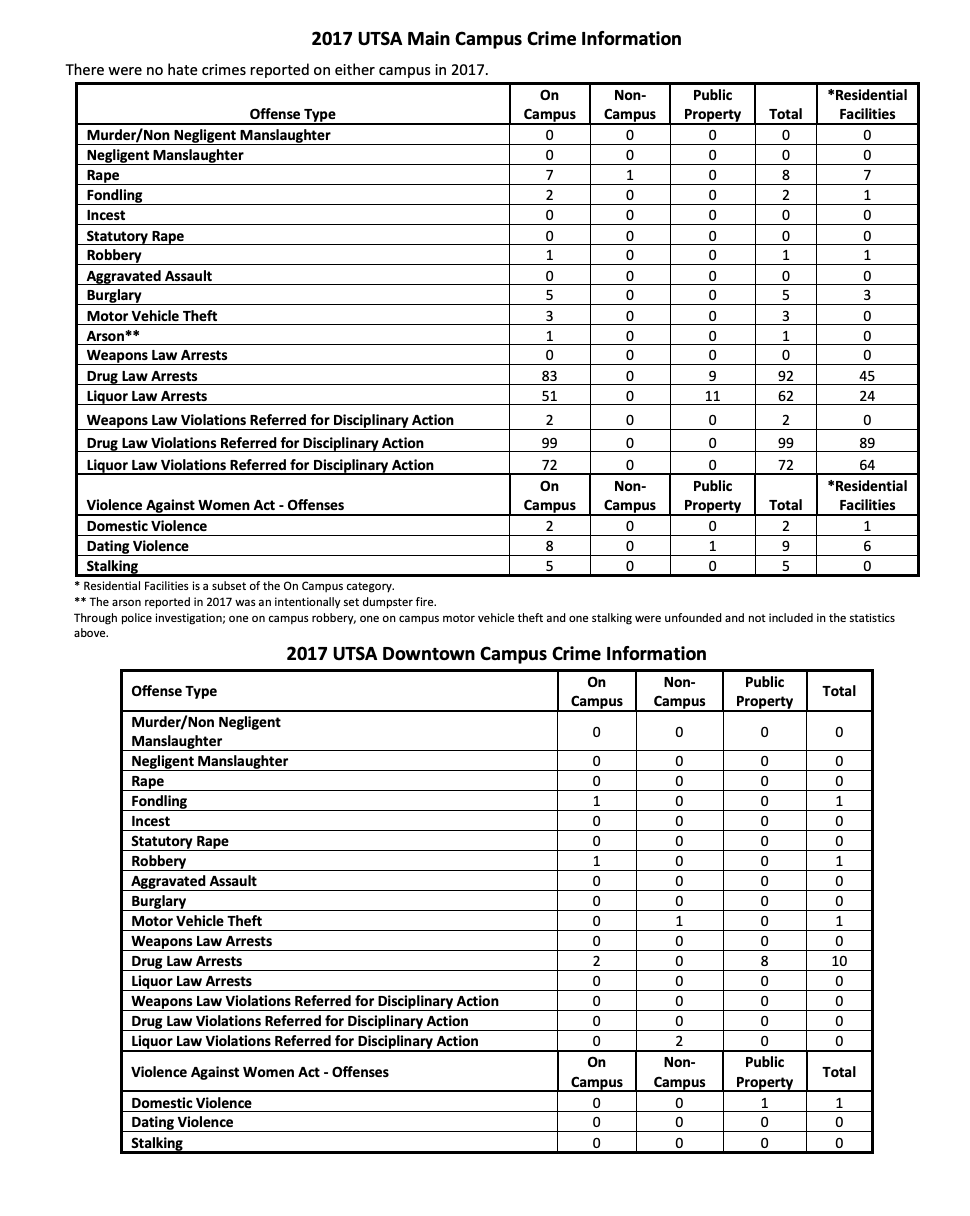 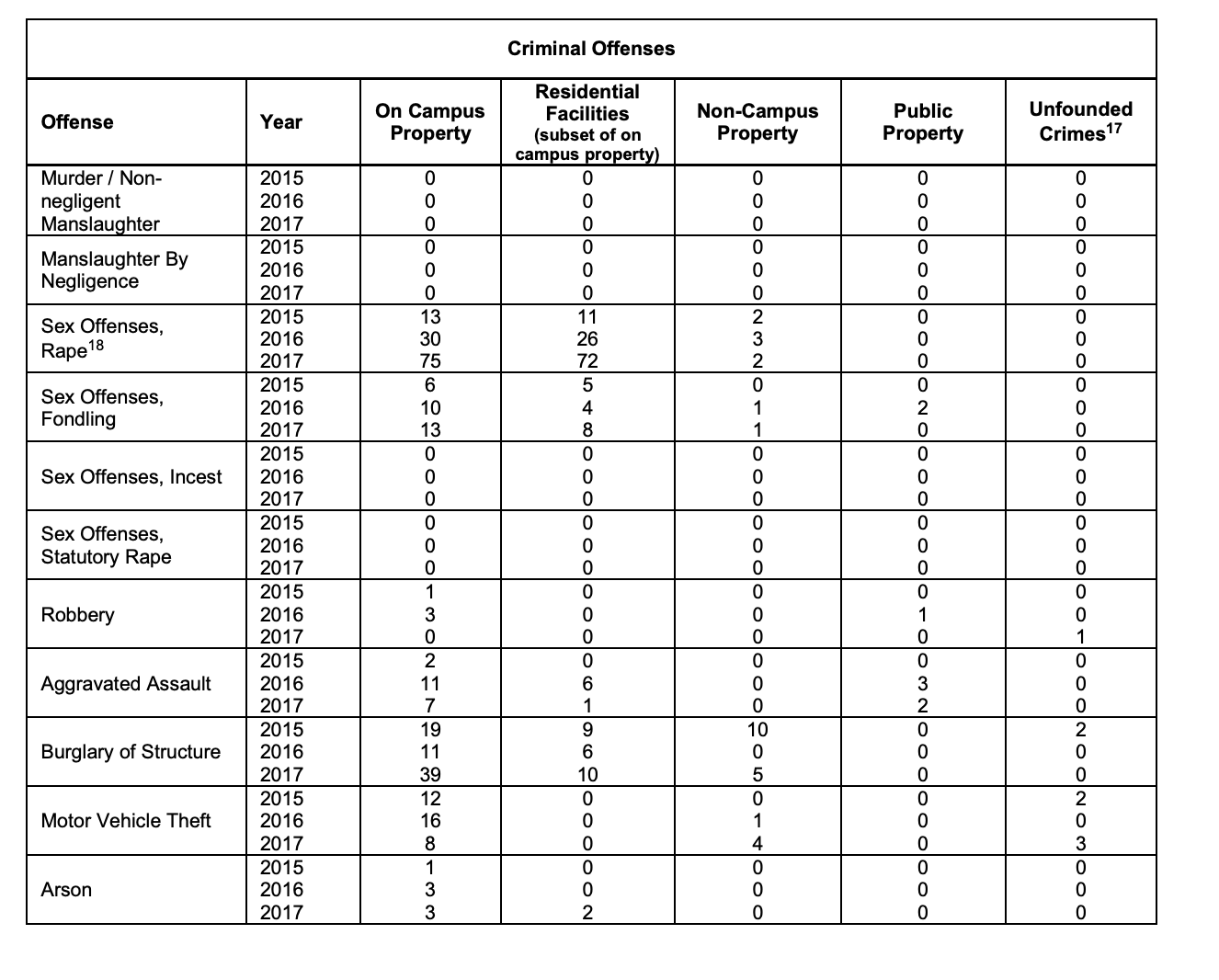 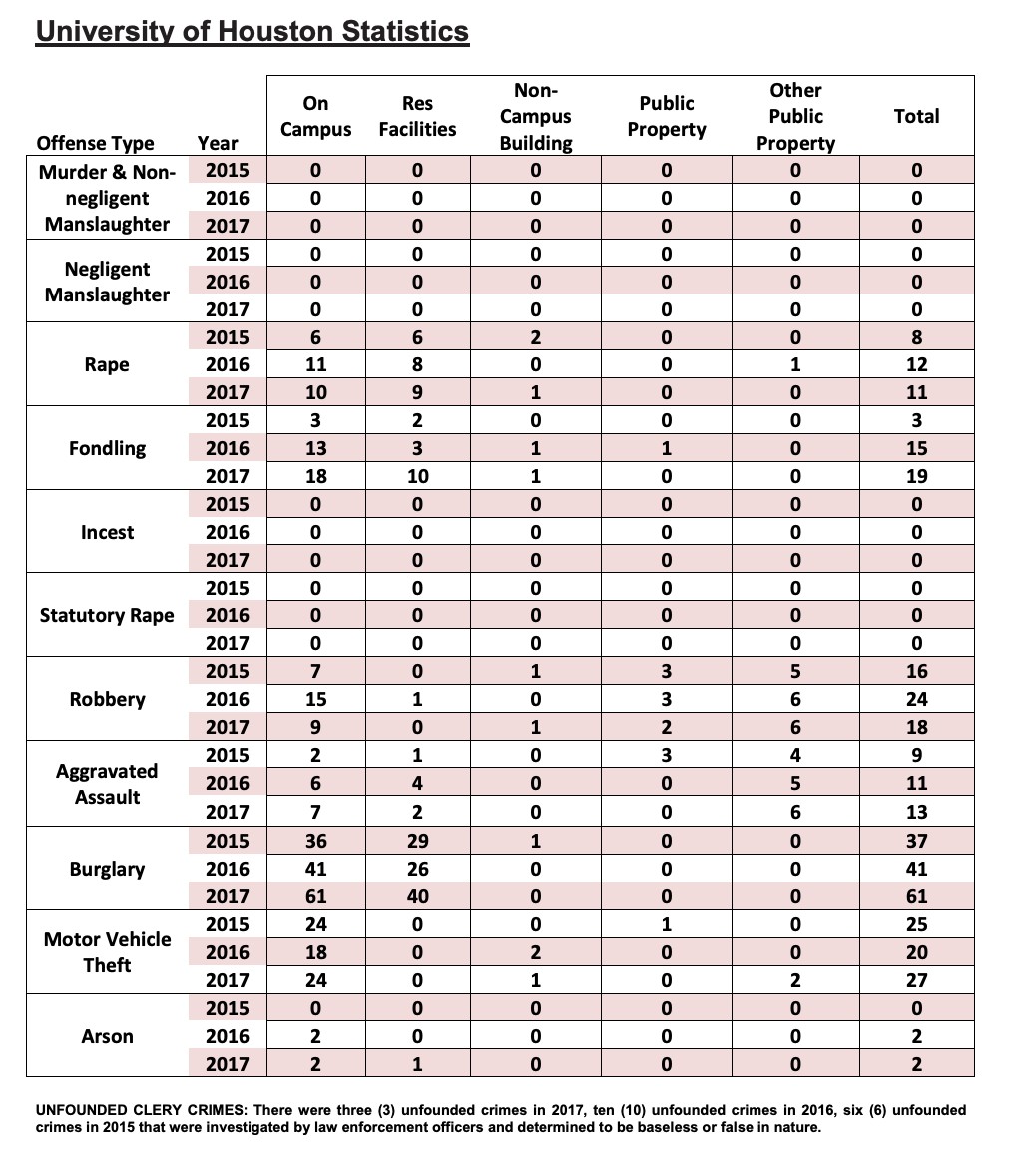 The University of Houston’s reportable data. U of H has a student population of approximately 45,000 students. 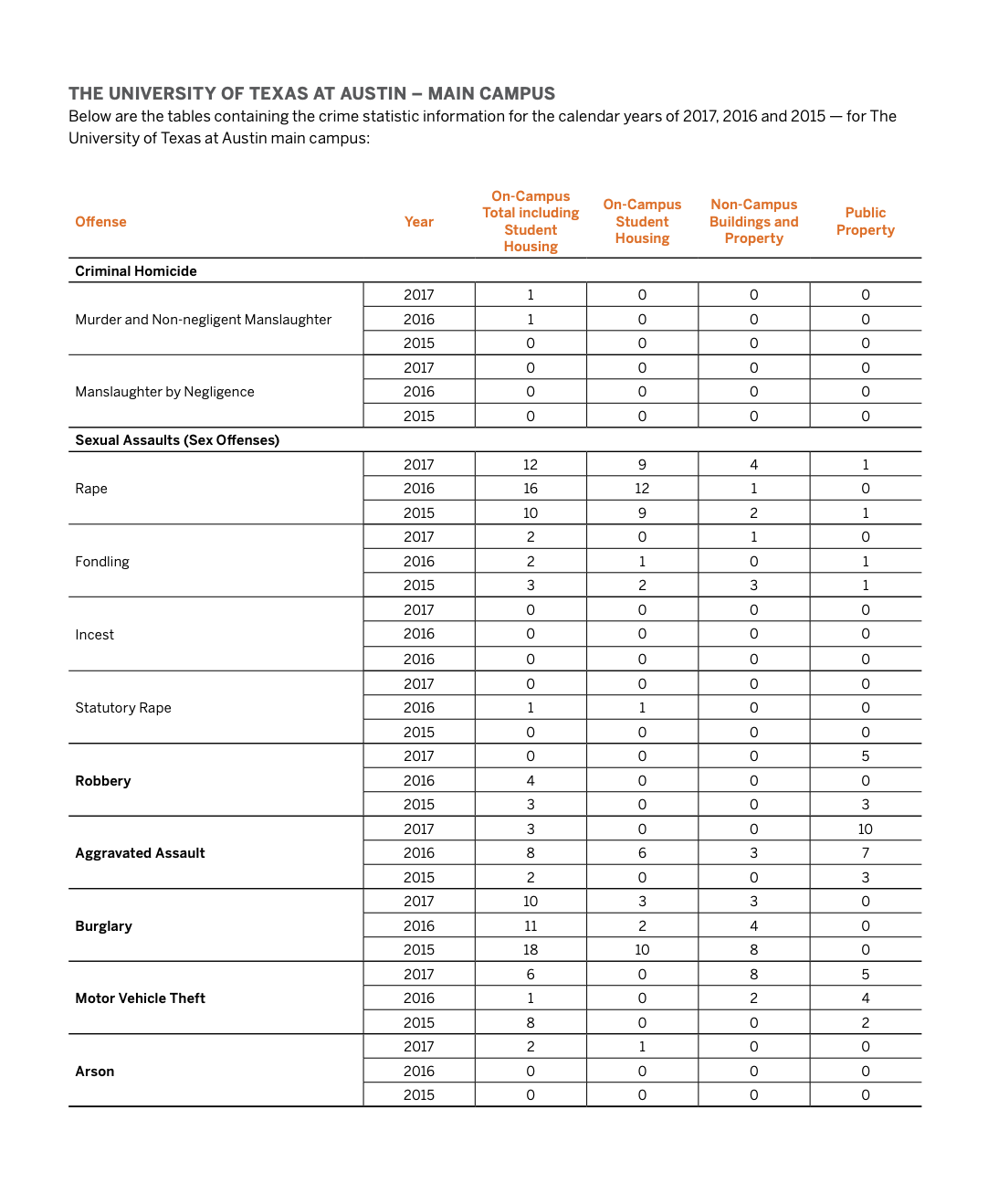 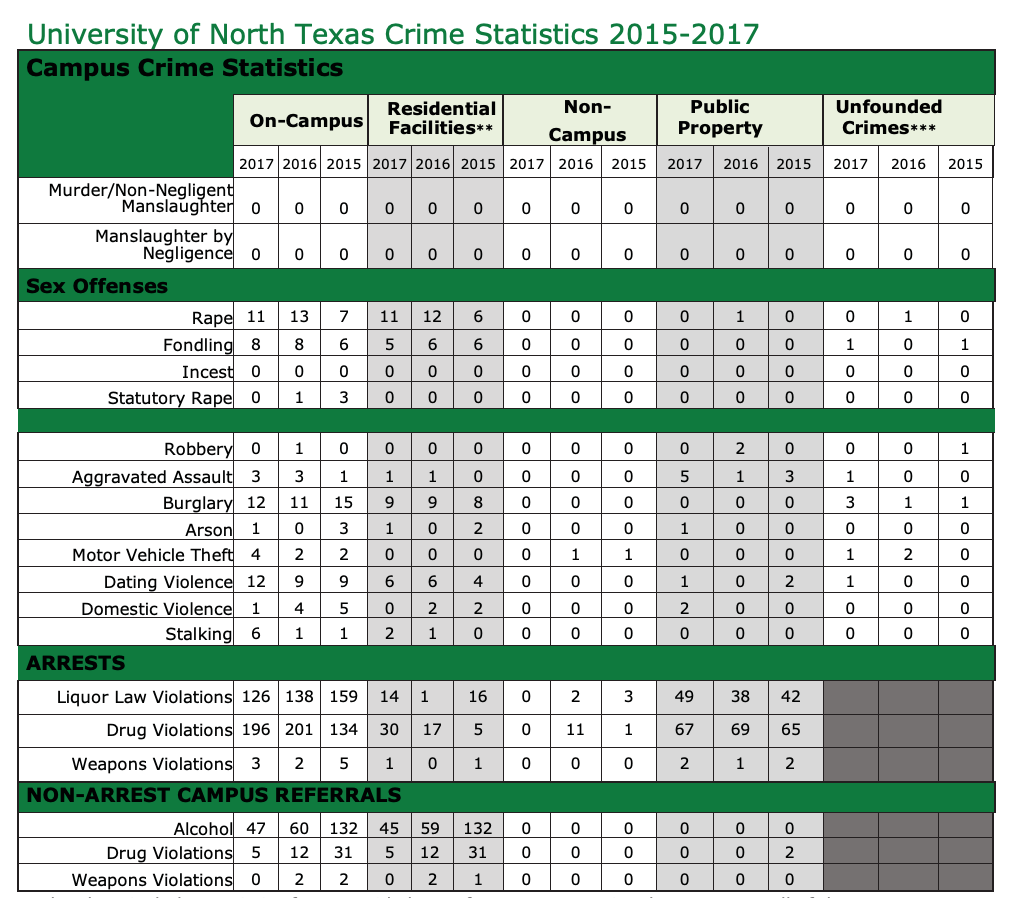 The University of North Texas’ Clery reportable data. UNT has a student population of approximately 38, 0000 students. 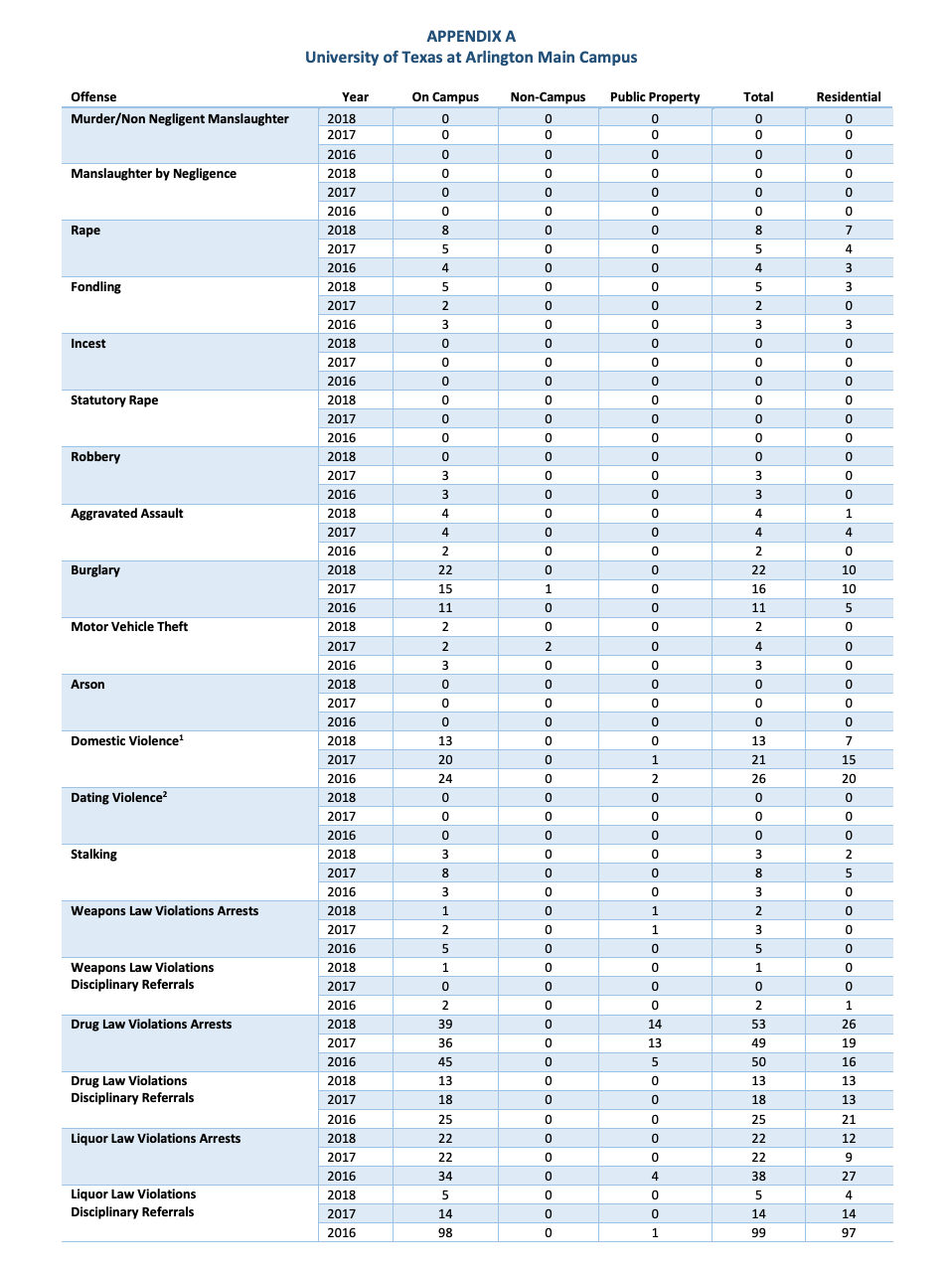 The University of Texas at Arlington’s current Clery reportable data. Texas State has a student population of approximately 32,000 students.

Texas State students walk in between classes, Tuesday, Sept. 17, in the Quad. Photo by Jaden Edison.

The University of Houston’s reportable data. U of H has a student population of approximately 45,000 students.

The University of North Texas’ Clery reportable data. UNT has a student population of approximately 38, 0000 students.

The University of Texas at Arlington’s current Clery reportable data. Texas State has a student population of approximately 32,000 students.

Following the underreporting of years of campus crime data, university officials are struggling to fill in the gaps of Clery reportable offenses for the 2019 report.

Texas State plans to make additional changes to the formatting of the Annual Security Report after the university participated in a voluntary technical assistance conference program with the Department of Education to attempt to bridge gaps in the coverage of Clery reportable data.

The report, previously known as “Campus Watch,” and now known as the Annual Security Report, will be published Oct. 1 and sent to current students via email.

University President Denise M. Trauth said prior to a peer review conducted by the International Association of Campus Law Enforcement Officers, she and her staff had no idea of the scope of the underreporting of the crime statistics within the report.

“The first time I found out that we had any difficulties, or any issues, was when the IACLEA report came to me in November,” Trauth said. “Once we get past this October first (publishing deadline) we do need to go back and see where the breakdown was. We never had any issues as far as I knew with this report, but we do need to go and take a hard look at it.”

The IACLEA review followed the resignation of former University Police Chief Jose Bañales, who led the department prior to the hiring of current UPD Chief Laurie Clouse. Trauth said prior to the assessment conducted by IACLEA, the data sets remained consistent and raised no red flags, although the data reported year after year did not match other like-sized universities.

“I had confidence in the people who were putting the report together,” Trauth said. “There never was any indicator we had any problem, (or) any deficiencies, in our reporting.”

The review by IACLEA took place prior to the DOE contacting the university May 2019 after officials noticed an uptick in violent crimes in San Marcos and the surrounding area, Vice President of Finance and Support Services Eric Algoe said.

“That led them to look at our Clery report (October 2018) and the numbers to them looked too low for an institution of our size when you compared it to the level of crime in the community that we are a part of,” Algoe said.

The IACLEA report named 19 areas where UPD could improve but highlighted Clery Compliance as a top five priority among community interaction, organization and management, operations and enforcement and emergency management.

“Immediate attention to these areas must be combined with an ongoing long-term commitment to continuous improvement if the department is to successfully enhance its image and provide for a respectable internal climate,” the IACLEA report stated.

Algoe said the misrepresentation of data is the primary area of focus for the police department, but there were other shortcomings of the report which included not separately reporting the Round Rock campus data from the San Marcos campus data, not having enough campus security officials identified and various formatting issues of the report itself.

According to Algoe, the university is now working toward putting context to the numbers in question to paint an accurate picture of crime on and near campus.

“Obviously misreporting this data is a bad thing­­–there is just no way around that–it’s a problem,” Algoe said. “What we really want to do though, in addition to getting it right, is put it into context because although there will be a significant increase in the amount of reports, that doesn’t necessarily correlate with an increase in crime.”

In order to ensure accuracy, Algoe said the department started using a new record management system after realizing old software was really designed for city police departments and not universities. Algoe speculates that while not every discrepancy in the report was a result of the old system, it may have played a part in the categorization of data.

“We were frequently having to go back and try to manually figure out what the system was doing for us,” Algoe said. “We have abandoned that system and introduced a new system called eFORCE that is widely used by universities and Clery reporting is a fundamental piece of it.”

As a backup to the eFORCE system, UPD has employees who review police reports daily and maintain a spreadsheet for counting Clery numbers. The human element of the data cataloguing process ensures the numbers in the system are accurate.

Additionally, Algoe said a reoccurring theme in the Title IX office during the reportable years may have been a contributing factor to the crime statistics being misrepresented

“There does appear that because of the Title IX’s office’s valuing of student confidentiality, there may have been some undercounting of things that were reported to the office that did not make their way on to the Clery report,” Algoe said. “So, we think that is likely going to come out as a theme.”

The misstep in reporting the Title IX Office’s Clery reportable data added to the host of problems Clouse ran into early on, apart from fact the old campus crime blotter was non-Clery compliant.

Algoe said the data is misrepresented and does not contain entries from the Title IX office that would have been reported had the reporting process been the same under former UPD Chief Bañales.

“I think there are reports of Clery reportable things people on campus were receiving that for one reason or another did not get included on the annual security report,” Algoe said. “The primary issue just appears to be related to communications within the university.”

Within a month after being named the new police chief, Clouse had formed a Clery compliance committee, something the university had never had before. The committee added consistency among reports from various Campus Security Authorities, Clouse said.

“An ideal structure is that Clery committee meets monthly and those team members bring statistics to the meeting and we review everything that’s happened in the previous month,” Clouse said. “And then you just continue to do that on a monthly basis so when it comes time to do the reporting (Oct. 1) you’ve already done all the work and you can feel confident that the numbers you’re reporting are accurate.”

Because the Clery report is so extensive in terms of who reports and what is reported, Clouse said it is important to meet with the interdisciplinary team to ensure the numbers are accurate across the board.

The new changes mark an era of inconsistency in reporting and showcase an amount of underreporting the university and UPD had done for years. Clouse said she remains focused on the task at hand: ensuring the numbers on the new report are accurate.

“I think at this point, blaming people, we’re beyond that,” Clouse said. “Now it’s time to make sure we’re doing our community a service by making sure we’re reporting accurate data.”

Algoe said he and Clouse are still compiling data from the last three years of reportable Clery offenses to restate previously reported years’ numbers and add audit trails and footnotes so DOE officials can back track and ensure things are added to the report correctly.

“That’s really the missing piece of the puzzle and I think what all of us are anxious to see is what the magnitude the reported crime is for the last few years,” Algoe said. “We will be very transparent about the change.”

According to the DOE’s website, fines can reach up to $57,317 per Clery Act violation, meaning each time the university is found to be reporting numbers inconsistently with what the DOE already knows, Texas State may be subjected to the same penalty for each instance.

Algoe is hopeful that because of Texas State “proactiveness” in the situation and because of the team’s partnership in the technical assistance conference program, the university will not face further consequences from the DOE.