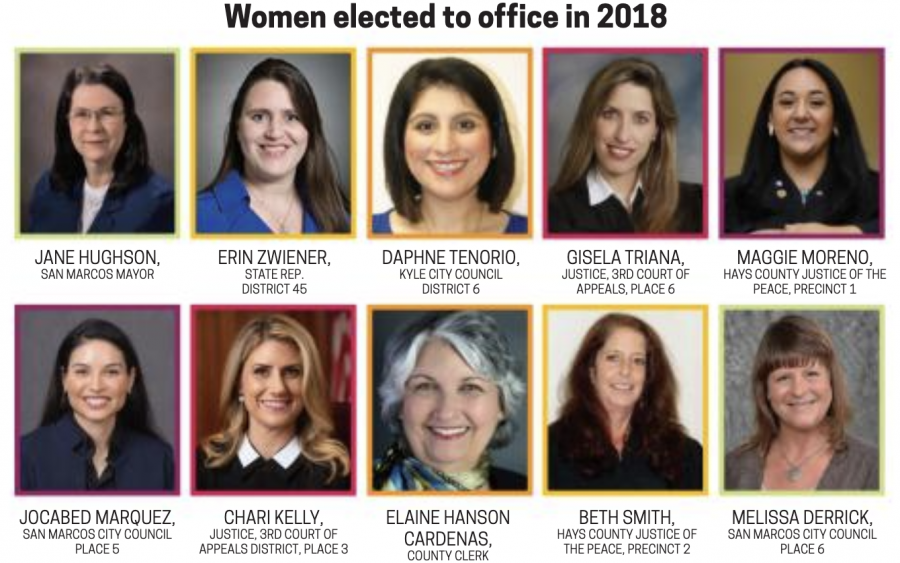 Headshots of women in Hays County. 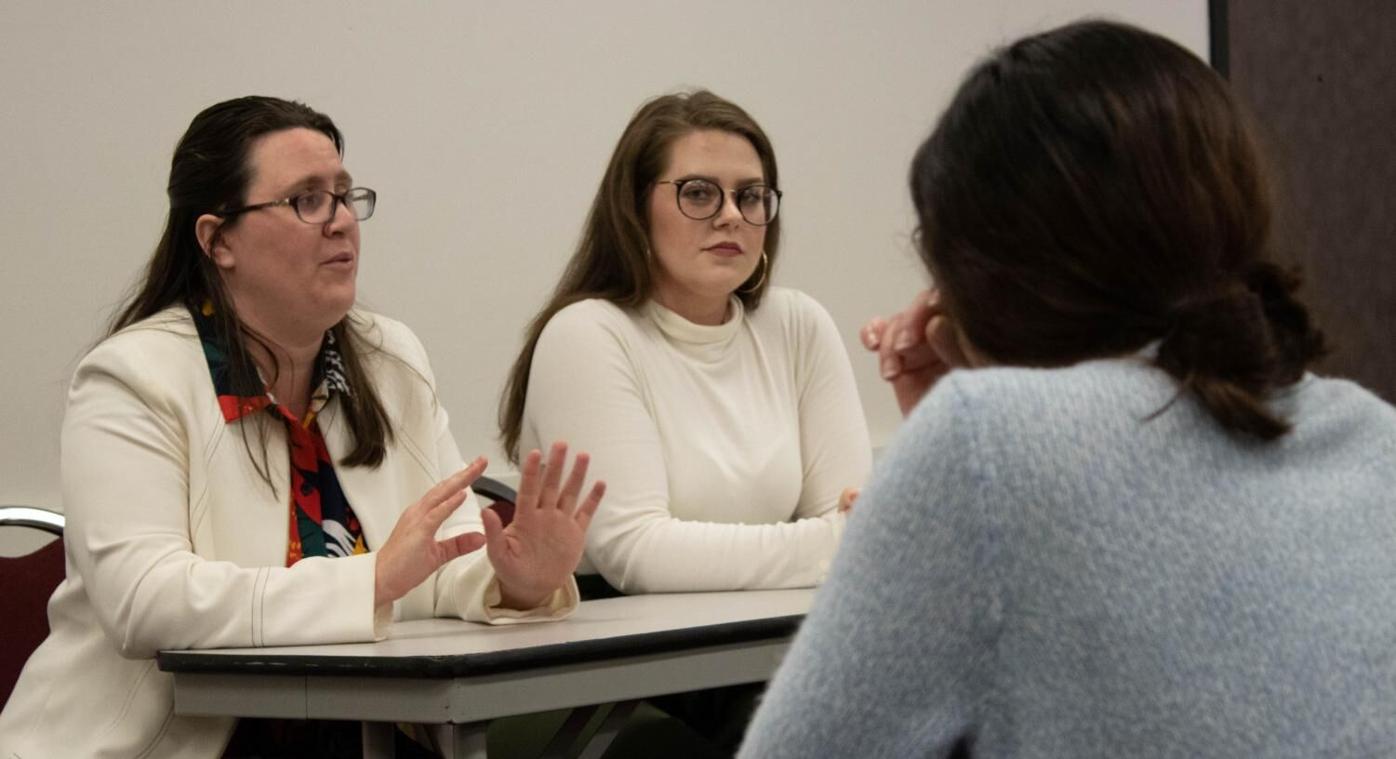 Texas State Rep. Erin Zwiener and her campaign manager Taylor Bounds speak to about 40 women about running for elected office as part of an event organized by the Hays County Women’s Political Caucus, Thursday, Feb. 27, 2020, in the LBJ Student Center.

“Your rights are not guaranteed unless you fight for them. Unless you vote, unless you participate,” Shannon Fitzpatrick, former Texas State University attorney for students, said to a group of about 40 women. “They can be taken away. And they were hard-fought to get there. Please keep that in mind. Please get involved. Please pay attention to the races that are out there.”

The group of about 40 women, ranging from college students to elected officials, met to discuss the fundamentals of working on a political campaign and running for office as part of an event hosted by the Hays County Women’s Political Caucus Thursday, Feb. 27.

The 2018 midterm elections saw a surge in women running for elected office at the local, state and federal levels. Records were broken with 126 women elected to U.S. Congress alone and a number of women elected to statewide and local offices all across the country. In Hays County, 19 women ran for office and won.

San Marcos Mayor Jane Hughson has been working on political campaigns since 1988 and served on the San Marcos Planning and Zoning Commission. Quickly into her time on PnZ, people started asking her when she was going to run for elected office.

Hughson volunteered to be on the city’s Master Plan committee, now known as the Comprehensive Plan, and felt the only way she could ensure the plan would be followed was to be elected to one of the seven city council seats.

Her father had just passed away in 1993 when Hughson decided she could not “sit around waiting for the older generation to do this.”

Precinct 1 County Commissioner Debbie Ingalsbe found herself in a similar scenario. Ingalsbe worked as a deputy constable for three years when people started asking her whether she was going to run for office. Ingalsbe’s father had also served as a Hays County commissioner in the 1980s.

“I thought it would be exciting, although I thought, ‘is this really something that I want to do?’ Because a lot of times there’s politics involved,” Ingalsbe said.

District 45 Texas House Member Erin Zwiener’s decision to run for office sparked from the outcome of the 2016 elections, despite never seeing herself involved in politics.

“I really felt called to get more involved. And one of the things I learned relatively soon was that no Democrat had challenged my predecessor, the Republican state representative,” Zwiener said. “The district was close enough that it seemed to me that no one had even fought for the seat. The next thing I knew was running myself.”

Hughson was elected to city council place 3 in 1996, again in 1999 and place 4 in 2014 before being elected mayor of San Marcos in 2018. Ingalsbe has been serving as the county commissioner for Precinct 1 for the last 24 years.

Hughson is only the fourth female mayor of San Marcos and the city council has only had 16 women total in office since 1967.

As the only woman currently on the Hays County Commissioner’s Court, Ingalsbe said her approach to her work is to do what is best and right for the county, regardless of party lines.

“I would hope that (the court is) not any different in the way we approach things. I think we all want what’s best for our county. But it is a concerted effort. We’re a team, and we need to work together because that’s the only way that we get things accomplished,” Ingalsbe said.

Hughson believes women have a different perspective when it comes to understanding issues in the community.

At the conclusion of the forum, Fitzpatrick pointed to a pin of a jail cell on her lapel, citing that imprisonment has been used to silence women in the past.

“People are afraid of you, and that’s good,” Fitzpatrick said.