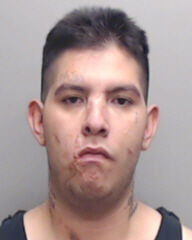 The San Marcos Police Department responded to a call at approximately 9 p.m. for an unconscious driver in a vehicle that was stopped at the intersection of Guadalupe Street and the west access road of Interstate 35. Derek Arredondo, 32, was present and unconscious with his foot on the breaks of the car.

According to police, the car doors were locked and narcotics and a weapon were observed on the front seat next to Arredondo.

Interim Police Chief Bob Klett said Arredondo is a convicted felon who has been involved in multiple violent offenses and because of Arredondo’s history of offenses and a weapon in view inside his car, the SWAT team and Hays County Crisis Negotiations team were activated to take him into custody.

According to Klett, patrol officers unsuccessfully attempted to wake up Arredondo by using lights, sirens and bumping the vehicle. After law enforcement could not contact his family via his cell phone, the SWAT team decided to take Arredondo into custody.

A diversionary device was deployed and caused a fire in the back seat of Arredondo’s vehicle while the SWAT team attempted to arrest him.

Arredondo was pulled out of the vehicle by SWAT officers after a violent struggle. He sustained burns as he attempted to return inside his car, resulting in Arredondo being transported to a hospital for treatment.

Arredondo faces warrants for Felon in Possession of Firearm and Unlawful Carry of Weapon. Police say a handgun and ammunition were recovered at the scene