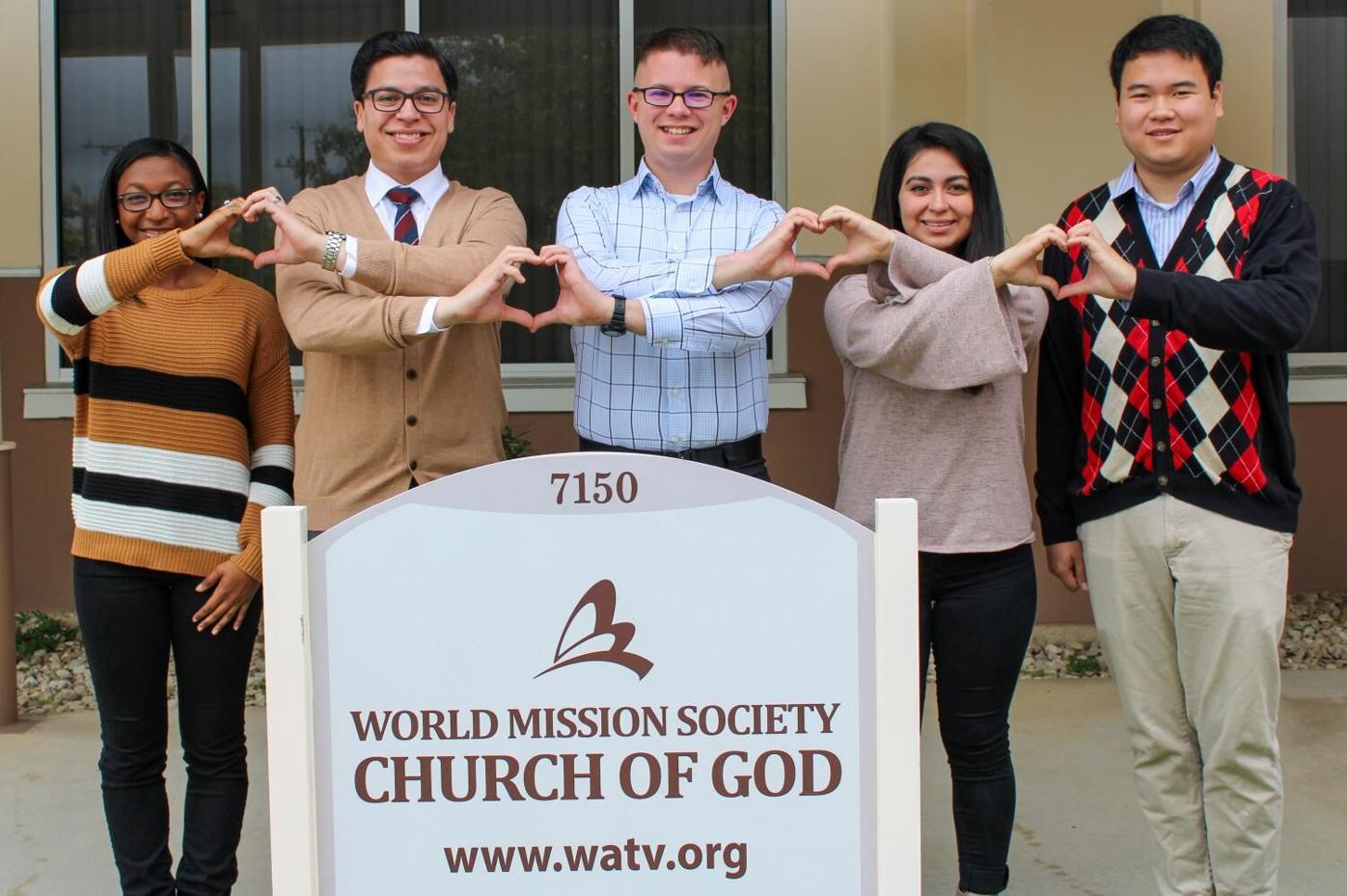 A screenshot of a post from Wildfire discussing World Mission Society Church of God members. 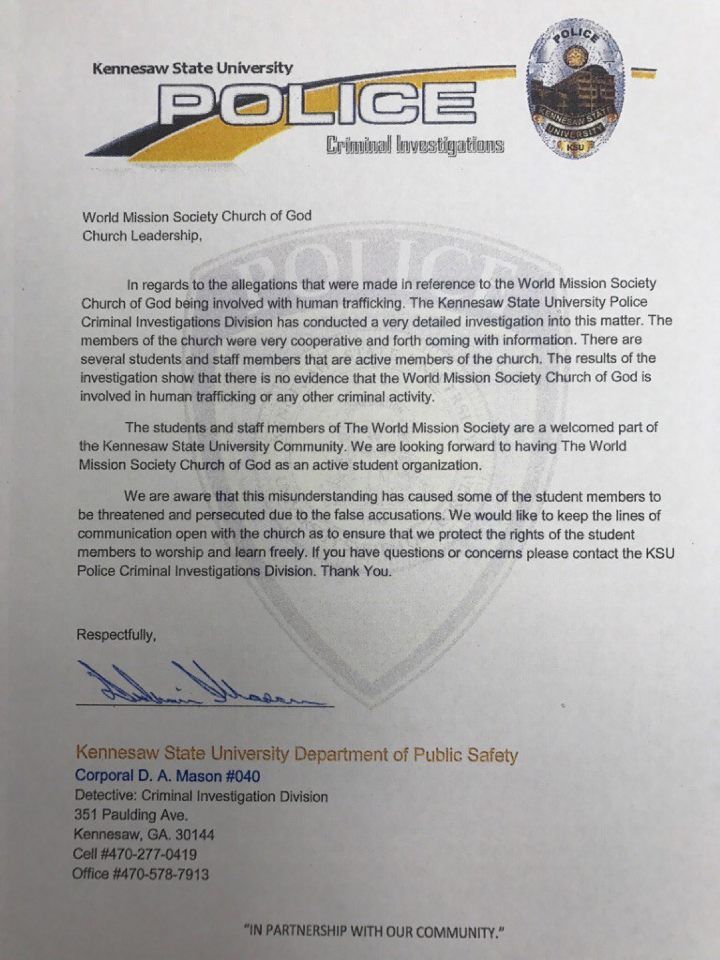 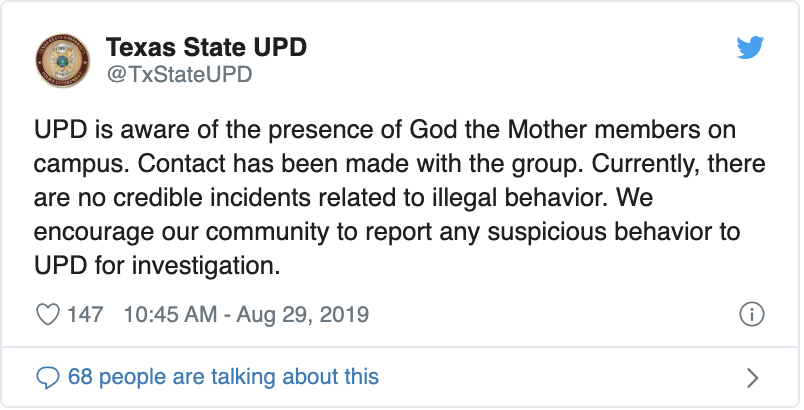 A screenshot of a tweet sent out Aug. 29 by University Police acknowledging World Mission Society Church of God members on campus.

Editor’s note: Following the article regarding the World Mission Society Church of God which ran Oct. 22, 2019, church members contacted  The University Star to discuss details of their practices and perception on campus.

World Mission Society Church of God members, colloquially referred to as “God the Mother,” responded to recent false allegations and discussed details about their practices, perception and church.

The University Star reported that nationwide claims of sex trafficking by WMS are unfounded and appear to have circulated solely in online social media posts—not by law enforcement or any governing authority.

University Police Department Captain Patrick Cochran said the department has performed extensive background checks on the organization that did not yield credible evidence to back up the allegations.

“We did a whole work-up on the group this year to make sure we were clear because you cannot really tell sometimes with social media,” Cochran said. “We went through our intelligence center, (Austin Regional Intelligence Center), and asked them to check this group out. So far we have yet to find anything coming close to claims of sex trafficking.”

In a request for comment by The University Star, WMS said they are aware of the circulating allegations and have noticed the effects of the disinformation on its members attempting to share their gospel.

In an email response, a spokesperson from the national WMS branch stated, “Due to the alarming nature of these false accusations, many users have shared these posts, causing the rumor to spread like wildfire. Unfortunately, the ones sharing, re-posting and re-tweeting this ‘news’ did not do their research, and the accusations have the improper appearance of being ‘fact.’ Although most encounters with our members are very pleasant, it is not until after the individuals read social media rumors that they begin to describe the encounter in a negative way.”

The Elohim Bible Study Club, WMS’s student organization on campus, reached out to The University Star to answer questions following the publishing of the investigation in October.

Texas State students that have been approached by WMS on campus have said, via crowd-sourced open forums like Wildfire and forms of social media, that they are often uncomfortable when approached by members of WMS.

Molina said members will try to have females and males approach together to ease the students, mentioning people only became concerned because of the allegations.

“When approaching people we will try to be in pairs. Sometimes there are not enough males to go with the females, meaning a brother to go with a sister, so sometimes we will pair them brother-brother or sister-sister. We do this to make it more comfortable,” Molina said. “We’ve been at Texas State since 2017 and (The University of Texas at San Antonio) since 2014, and it was never an issue, but I think because of the rumors, people now question it.”

Erickson said the members will maintain a kind attitude when approaching students, not pushing when seeing signs they are not interested.

“When we approach people, it is not like we are forcing it upon them. We will simply ask ‘Hey, we’re part of the Elohim Bible Study Club and we are just sharing with students about the existence of God the Mother and the Bible – have you heard about that?'” Erickson said. “If they say no or show that they are not interested, we’ll just say ‘Oh, okay. Thank you and have a good day.'”

Guiton said many students on campus are aware of the allegations against her church and that it is easy to correct due to the volunteer services WMS showcases, also citing other media outlets have debunked the claims.

“Whether we are initially sharing with someone or even as students on campus have recognized me and come up to me asking ‘aren’t you a part of that group?’ because they have seen the (allegations) before, I will just clear up the misunderstanding,” Guiton said. “We are really thankful that there are volunteer services that our church has done over time so that people can see the positivity that our church shares throughout the world.”

Various news organizations, news articles and city municipalities have corroborated the claims of sex trafficking by WMS groups are inaccurate.

Guiton said the growing prominence of social media and alternative news sources have made it harder to combat the false allegations, stating her church is similar to others in many ways.

“Unfortunately in this time, we see one thing on the internet and we turn off without doing more research on it and seeing what is actually fact,” Porcayo said. “We are a Christian church, nondenominational, we study the Bible with students and people and we do volunteer services. We are trying to set a good example and show them that we are not anything like what many people say on the internet.”

“If we were really doing human trafficking, how could we just simply be walking around in broad daylight on campus? The natural nature of a criminal is to hide, but we are not trying to be secretive,” Molina said. “If you think about it and just use common sense, it just doesn’t make sense.”

The members said they have noticed the prominence of the allegations start to fade, but still hope to work with the University Police Department to produce a statement reaffirming the group does not have malicious intentions and has passed a background check as they have with other college campuses.

“You can tell now that people are little by little starting to let go of (the allegations), but it will take some time for them to release that this is not true. For this reason, we have a kind of safety bulletin or statement that we want to give to the police department to hopeful sign and send out to students,” Molina said. “We have been doing this with many campuses.”

Molina provided a formal Kennesaw State University Police memo declaring they had “conducted a very detailed investigation” into the organization and found nothing akin to the allegations made against the church. Molina said the UPD is already aware of the group and he hopes to work with them to publish a statement similar to Kennesaw State’s with UPD to address the allegations.

UPD put out a tweet in August acknowledging WMS’s presence on campus and reporting “no credible incidents related to illegal behavior”.

“From my understanding, (UPD) knows us already and they know what we are doing. (Police have said) ‘I am just coming out to you because they called and it is my job. I have to come out and ask you what is going on but I know what you are doing,'” Molina said.”We already have a written statement and hopefully, we can speak with (UPD Police Chief Laurie Clouse) and get all the allegations cleared up.”

Molina said they see the rumors as a test akin to those faced by Christians in the Bible and sees the challenge as a blessing.

“The way that we see it, biblically, is that it is a blessing. Even when we look 2,000 years ago when Christ was resurrected, people started a rumor saying that disciples took Jesus’s body, saying he had not actually been resurrected,” Molina said. “We can see that Christians even 2,000 years ago we hindered from spreading the gospel because rumors hindering them. In a sense, we are experiencing the same thing and that makes it a blessing.”

In closing the forum, Molina said he is hopeful for the organization to take part in more activities on campus and hopes their true motives will be seen.

“We want to do (Bobcat Build) on campus with the students to get involved,” Molina said. “We don’t create any tension on the school’s campus or make students feel uncomfortable when walking at night – we just want to share God’s love through the Bible and the truth.”

The City of San Marcos narrowed its search for the next chief of police to two candidates, not including the current interim police chief Bob Klett.