A recent Hays County jail inspection requested by the county judge determined there was no need for technical assistance, and the requested inspection areas were in compliance with jail standards, according to a report obtained by The University Star.

Judge Ruben Becerra (D) initially requested his own walk-thru of the facility to investigate concerns of "inmates unable to flush toilets more than three times per hour creating the smell of human waste," broken walls and "a smell of swamp gas" in cells. He was denied a walk-thru by Sheriff Gary Cutler (R), who cited COVID-19 protocols as the reason for the denial.

Becerra then requested the inspection from the Texas Commission on Jail Standards, which conducted an unannounced inspection of the jail on March 16. 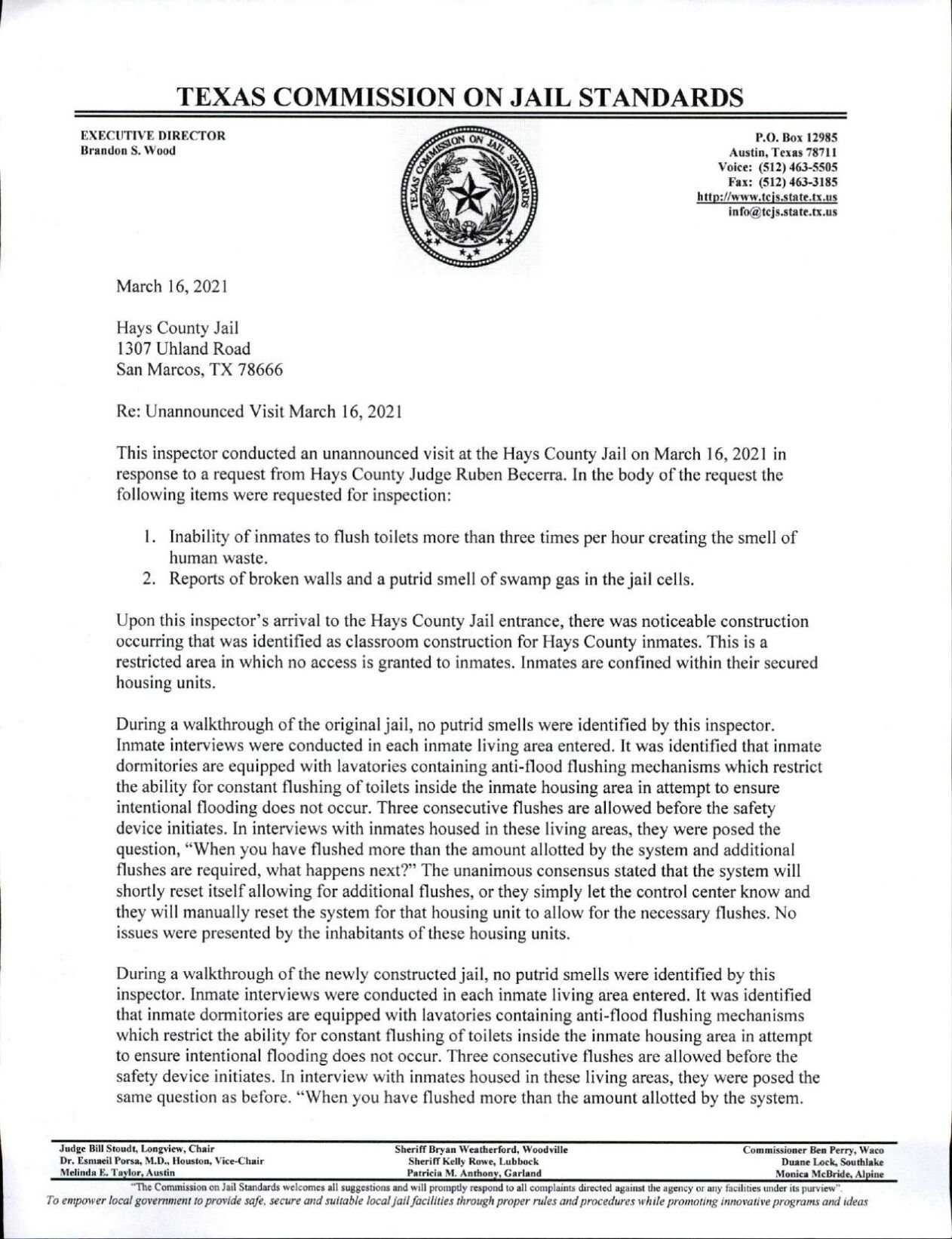 The March 16 inspection report, conducted by Critical Incident Inspector Jon Luna from the Texas Commission on Jail Standards and released to The Star from the Sheriff's Office, says during a walkthrough of the older part of the jail, no "putrid" smells were detected.

"It was identified that inmate dormitories are equipped with lavatories (bathroom areas) containing anti-flood flushing mechanisms which restrict the ability for constant flushing of toilets inside the inmate housing area in attempt to ensure intentional flooding does not occur." the report says. "Three consecutive flushes are allowed before the safety device initiates."

The report says inmates were asked about their experiences when "additional flushes are required," and the unanimous consensus from inmates was "the system will shortly reset itself allowing for additional flushes, or they simply let the control center know and [the control center] will manually reset the system for that housing unit to allow for the necessary flushes."

The report says the inspector identified an issue with a timer in one of the housing units, "Pod E," that led to a problem with flushing.

"Jail Administration and facility maintenance were on-site and were able to remedy the situation within minutes while this inspector was on-site," the report details. "Despite the erroneous lavatory timer issue, there was no detected putrid smell within this, or any housing unit encountered by this inspector."

Upon completion of the inspection, the inspector found no areas of non-compliance, and no technical assistance from the inspector was required in the facility.

"The positive results of this unannounced visit by a jail standards inspector is not a surprise to those of us who are familiar with the Hays County jail staff," Cutler says in a public statement.

In a public statement via Twitter, Becerra, who believes the contractor Cutler "was working with" had enough time to correct the issues prior to inspection, says he will continue to "look into" concerns raised by the community.

"It is unfortunate that this much effort needed to go into the addressing the repairs of this taxpayer — funded county facility," Becerra says.

The jail's public information officer, Lt. Dennis Gutierrez, says the situation was one of a "political nature" that "doesn't surprise us."

Becerra's concerns were not the first time county jail conditions have come into question in the past year. Demonstrators led a caravan outside county facilities last summer demanding the release of pretrial detainees following reports of inmates diagnosed with COVID-19.

Thomas Just, a former attorney for county inmates, told The Star at the time, during visits to the jail, he saw guards and inmates with no masks, not social distancing — contrary to what the jail was telling the public.

The jail, which initially closed its doors to visitors due to the COVID-19 pandemic, began allowing visitors again on March 22.

This is a developing story. The University Star will continue to provide updates as they are made available.