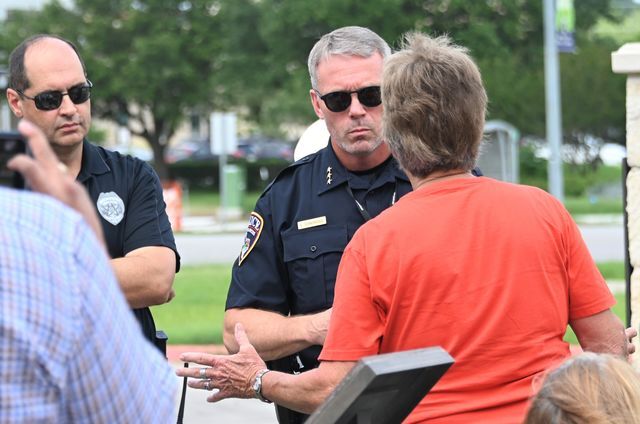 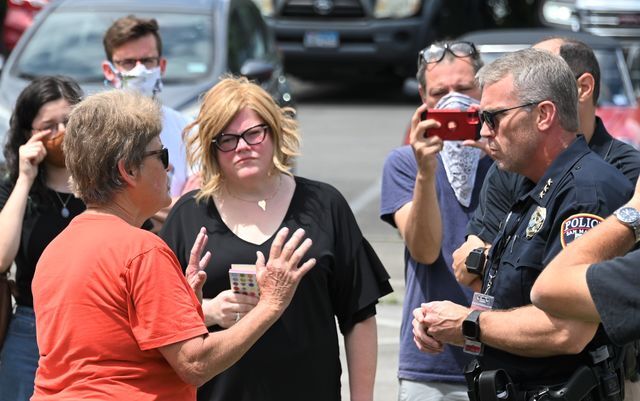 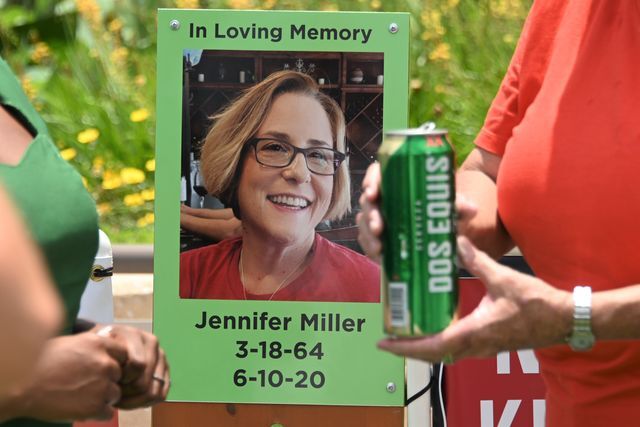 Pamela Watts holds a 24oz can of Dos Equis beer in front of a memorial sign for Jennifer Miller while talking to KXAN reporter Jala Washington, Thursday, June 10, 2021, at San Marcos City Hall. An identical can was found on the night of the collision in the car of Sgt. Ryan Hartman, who refused a blood alcohol draw at the scene.

It was the morning of June 10, 2020, when Pamela Watts and Jennifer Miller took the day off from work with plans to have lunch with friends.

On their way home, Watts says their car was struck from the side by an oncoming car, leaving their car so severely crushed that only one person could be seen from inside their vehicle.

The incident was caused by off-duty officer Sgt. Ryan Hartman of the San Marcos Police Department, who failed to stop at the intersection of Texas 130 and Maple Street in Lockhart, Texas. Hartman was traveling 16 mph over the 30 mph speed limit and ran through two stop signs before crashing into the side of Miller and Watts' Honda Accord. Miller died on the scene.

According to police reports and forensic evidence, it was later discovered that Hartman was driving while talking on the phone and did not attempt to break the vehicle during the collision. Inside his truck, there was also an open container of Dos Equis beer that was more than half empty.

Reports indicated Hartman refused to take a blood-alcohol test at the scene and denied he had consumed any alcohol. Though his blood was tested for alcohol about three hours later, it came back below the legal level of intoxication. Hartman was later reinstated to the police force and only charged with running a stop sign.

A year after the collision, Watts continues to seek justice.

In the moments following the crash, Watts was transported by air to the Ascension Seton Hayes hospital in Kyle, Texas, where she was treated for a traumatic brain injury. Directly after the crash, Watts says it didn't seem as though Hartman was concerned about her safety or Miller’s proximity to death.

“[Jennifer] didn’t die right away. The accident happened at 4:14 p.m., and they say she died at 4:56 p.m., and he was sitting on the curb worrying what’s going to happen to him," Watts says. "You would think there might be some accountability, but he got a ticket for running a stop sign. That’s what Jen’s life was worth, and I just can’t live with that."

The Lockhart Police Department investigated the case and recommended a charge of criminally negligent homicide. In the trial, a grand jury reviewed the charge, returning a no bill. Despite the recommendation, the jury decided there was not enough evidence to convict Hartman. For about five months, Hartman received a paid leave of absence and is now back working for SMPD.

Watts and many other San Marcos residents are calling for the immediate removal of Hartman from the police force. The group also questions the decisions of San Marcos Chief of Police Stan Standridge who, they claim, allowed for Hartman's return without a justified punishment.

“We think [Standridge] depended on the no bill and didn’t care about the laws that this officer broke when it should have been a terminating offense. When [Hartman] refused his sobriety, that alone should have been enough to get him terminated. The open container is a defiant violation, and, why else would he not submit to a sobriety test if he wasn’t drinking?” Watts says.

Along with pushing for the removal of Hartman, Watts asks for systematic change regarding the criminal law system. She believes the San Marcos judicial system should allow victims to speak in a grand jury and limit the district attorney’s authority to present evidence without the supervision of an audience.

Mano Amiga, a local social justice organization, has worked with Watts since April, when it first posted about the incident on social media. A few of Watts’ friends and other local activists reached out to Mano Amiga. Within a few weeks, the collaboration began, and the group started pushing for police accountability across Hays County.

"It's crystal clear that there are perfect grounds for [Hartman's] dismissal," says Mano Amiga Co-founder Jordan Buckley. "We want clarity on why municipal leaders thought it was acceptable to keep such a hypocritical individual on the force."

Mano Amiga and Watts question the police reports that claim officers did not smell alcohol on Hartman's breath at the scene, pointing to the fact the officers were wearing face masks at the time.

On the first anniversary of the crash, protestors, led by Watts, gathered at San Marcos City Hall, asking for retribution and justice for the death of her partner. During the protest, Standridge spoke with Watts, stating that he had no legal grounds to terminate Hartman.

According to Texas law and union contract, discipline must be issued within 180 days of an incident's occurrence. In this case, those 180 days aligned with Standridge's promotion to chief of police, leaving him with minimal time to act within the 180-day timeframe.

“From the employment perspective, I have to go by the rule of law. The rule of law says I have 180 days as the chief administrator to effect discipline. Those 180 days expired by the time I get here I learn that the grand jury has returned a no bill, so, by law as a civil service agency, you cannot terminate his employment," Standridge says while speaking to Watts at City Hall.

In response, Watts says she still believes action should have been taken, resting part of the blame on former interim Chief of Police Chase Stapp for his lack of leadership before the arrival of Standridge. She describes Standridge's arrival at the protest as “crashing Jen’s memorial.”

According to City Council member Maxfield Baker, Watts is yet another person who has been failed by the judicial system, likely due to both the grand jury and the local police department. Baker believes that off-duty police actions shouldn't be counted separate from when an officer is on duty.

“The things that I do outside of my City Council meetings qualify as my ability to be a successful leader. If I killed somebody in a similar fashion, I would have no doubt that I would expect to see calls for me to resign,” Baker says. “When we look at people in leadership positions, they need to lead 24/7.”

Not knowing what was to come in the days ahead, Miller spent the last two days of her life with Watts. The pair floated the river in tubes and went out to eat, sharing time and forming memories as life partners. When she looks back at the person Miller was, Watts says she remembers Miller's passion for gardening.

“I don’t know how many more plants she could have planted, but it was like every day was a trip to Home Depot or Lowe's to get dirt, and it has to be a specific kind. I didn’t even know they had so many kinds of dirt. If it was a cactus, it had to be cactus dirt, and it got down to me saying just tell me what color bag I’m looking for,” Watts says.

While recovering from her brain injury, Watts continues to protest for the termination of Hartman from SMPD, hoping to finally earn justice for Miller.