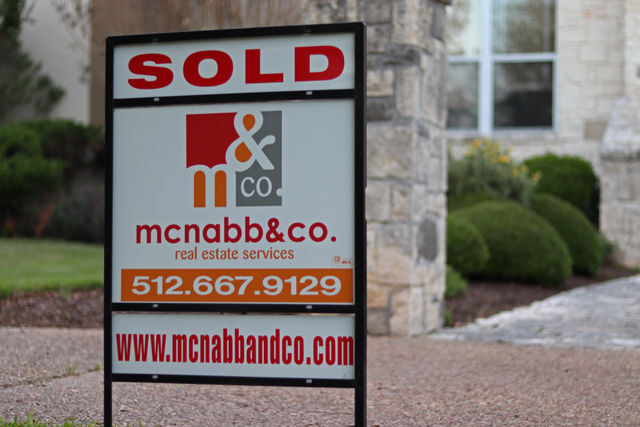 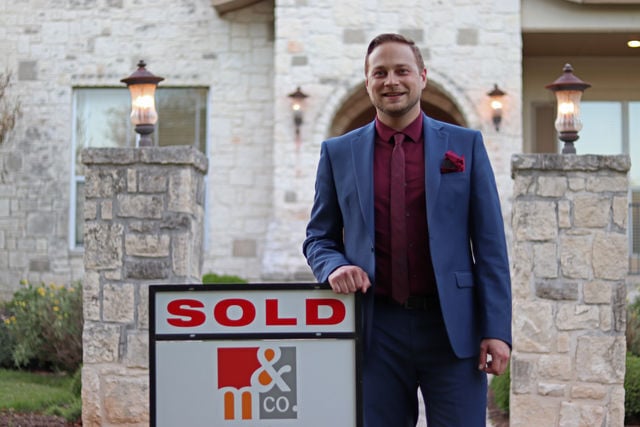 Real estate agent Robert Dorsey poses with a sold sign on his property on Friday, May 7, 2021, at 2268 Summit Ridge.

As the population of San Marcos grows and housing options become less accessible, city officials are working to assist residents facing the consequences of rapid city growth with the Strategic Housing Action Plan.

The plan consists of information collected by the city's workforce housing taskforce which examines the struggles faced, such as housing affordability, by residents in the local area looking for homes.

The Strategic Housing Action Plan began in 2019 and will take place over three years. The task force has since issued a draft of solutions to correct the possible shortage and lack of affordability of homes in the area. These solutions include implementing more affordable rentals for residents earning less than $25,000 as well as starter homes and family homes priced near or below $200,000.

The City of San Marcos is allocated CDBG funds to assist with national disasters, such as COVID-19, and to help low-income residents. Griffith explains cities must follow certain rules when allocating funds. For example, a majority of the funding must go toward citizens who fall into a low-income bracket.

“Basically, the main point is that it’s there to [serve] low to moderate-income people," Griffith says. "So, in particular, people who've encountered less than 80% of the area median income."

In 2017, the population of San Marcos was estimated at 63,071 residents, a growth of more than 18,000 people since 2010 where the population was 45,000. The San Marcos Housing Needs Assessment estimates the population will continue to grow over the next few decades due to the city's close proximity to large cities like Austin and San Antonio in addition to Texas State's influence on the population.

“Part of the issue is we get a lot of growth pressure from Austin,” Griffith says. “People who are working in Austin are starting to live in San Marcos and then driving, or whatever. So, that adds pressure to the community; more homes are needed.”

With student geared housing becoming more prominent in the area, Logan Presley, 25, says the pricing of student housing has stopped him and his partner from finding suitable, reasonably priced housing in San Marcos.

“We're not students, and a lot of these places, one of the keywords, kind of, is when there's this sort of place where they're like ‘Oh it's $600 a month per room’, you know, which means that they're looking for a couple like college kids that all want to live together, to pay $600 bucks a month," Presley says. "Which means we'd be paying $2,400 a month, as opposed to the almost $1,000 that we do now."

Presley has lived in San Marcos for six years but feels lost and without any real solutions because of the limited housing options caused by the student housing market.

“Sometimes I think my only option may be to go to like Austin or something, but I don't have a vehicle, which makes it even harder because even the transportation system is geared toward students," Presley says.

Presley believes the housing plan would be helpful if the city uses it to see that attracting people to live in San Marcos would help the city, rather than allowing more student apartments to be built as students eventually move away and rarely become permanent residents.

Stacy Hyder, a San Marcos native and single mother, believes she is financially secure enough to find housing options in other areas, such as Austin's housing market. In San Marcos, however, she feels the housing and apartment markets run too expensive.

“Just trying to find a place, you know, that’s nice, that doesn’t have a lot of college kids, parties or crime rate at an affordable price is really hard," Hyder says. "I make fairly decent money because I work for the post office, so I know if I’m having a hard time, people out there that are making like minimum wage or, you know, even $16 an hour, I don't even know how they're doing it. I have no idea."

Hyder says although she initially looked into purchasing a home for her family, because the San Marcos housing market is small and competitive, she has ventured to apartments. However, apartments often require residents to have a gross salary of at least three times the monthly rent, which Hyder says is too troublesome.

“You pay three times the rent, so if it’s $1,600 a month, as a single parent you have to make $4,500 a month, which almost nobody makes that amount by themselves," Hyder says.

Robert Dorsey, a local real estate agent and a partner with SMTX Property Management, says when he first started working in the San Marcos area nine years ago, the price for a home was approximately $200,000. He says housing prices have increased since due to the low inventory of houses.

“That task force came up with several different strategies on how the city could help facilitate making housing more affordable," Dorsey says. "What it boiled down to was we needed a better mix of home offerings and home products that are available to people, which include more townhomes, more condos, properties and homes that are more affordable for first-time homebuyers, smaller family units and single people."

The Strategic Housing Action Plan is currently under review and will be brought forward to the San Marcos City Council for discussion this summer. Griffith says the plan is something for citizens to look forward to, hoping the plan will give residents needed reassurance when it comes to housing.

For more information about the Strategic Housing Action Plan, visit the city's website.