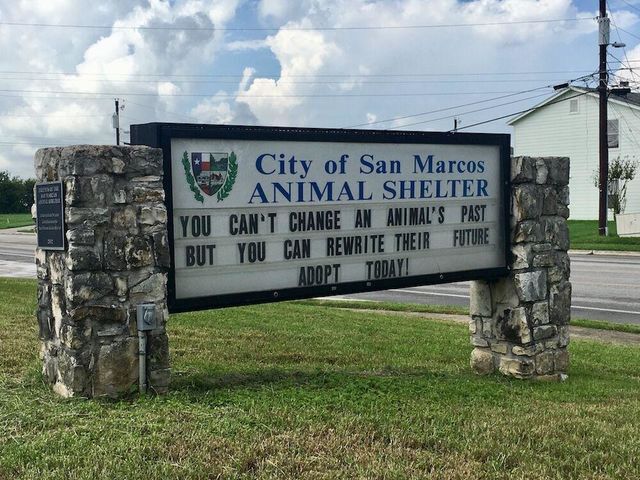 The sign in front of the San Marcos Regional Animal Shelter adoption center, a public facility. 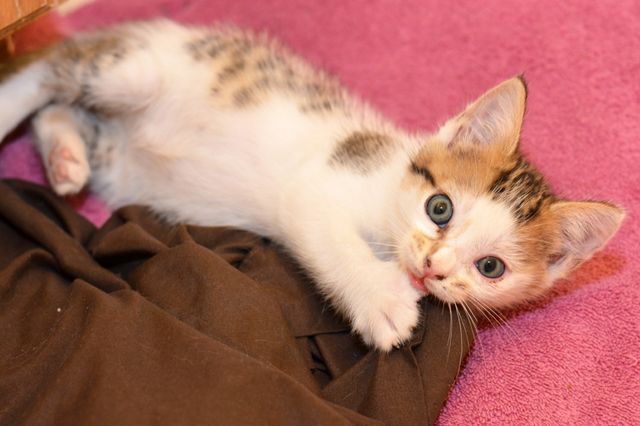 A small brown and white kitten Caroline lays on a towel at her foster's home, Friday, May 28, 2021, in San Marcos. 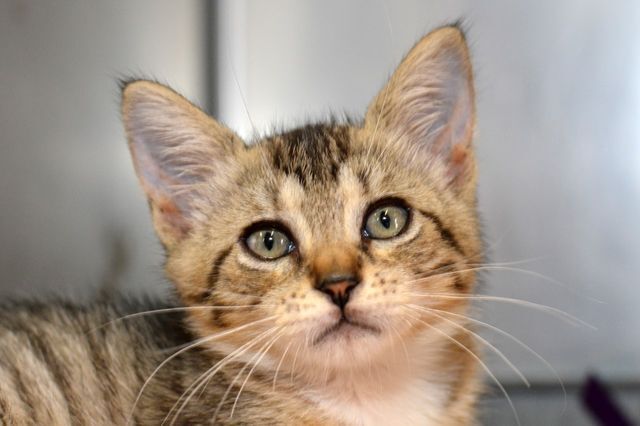 Brown and black kitten stares into the distance in a kennel Tuesday, May 25, 2021, at the San Marcos Regional Shelter.

The sign in front of the San Marcos Regional Animal Shelter adoption center, a public facility.

A small brown and white kitten Caroline lays on a towel at her foster's home, Friday, May 28, 2021, in San Marcos.

Brown and black kitten stares into the distance in a kennel Tuesday, May 25, 2021, at the San Marcos Regional Shelter.

As kitten season scampers through Hays County, the San Marcos Regional Animal Shelter seeks to educate community members on what to do if they find abandoned kittens and also looks for more animal fosters as the shelter's capacity crawls to new heights.

Kitten season, which begins in March of each year and lasts until October, is another term for cat breeding season, the time when most female cats are in heat, a cat’s estrous (reproductive) cycle.

During these months, many cats often produce litters of kittens, generating a large population who end up abandoned, sick or near death. The San Marcos Regional Animal Shelter strives to rescue as many kittens as it can with the help of local citizens.

Animal Shelter Program Coordinator Sophia Proler says the main source of kitten rescues comes from citizens who find kittens alone and take them to the shelter. However, in many of these situations, she says the kitten is not in need of rescue.

“People think that mom is not around, and they will pick up perfectly healthy kittens that they think are orphans, but, in fact, they are just in their nest waiting for mom to come back,” Proler says. “Because the human is there, at the nest, a cat, a mom cat, is not going to come back because, of course, she's scared, and she's smart, and she's like, 'No, I'm not gonna go where this scary human is, I'm gonna wait till they're gone.'”

At times like this, Proler emphasizes the importance of leaving kittens in their found location. Instead of immediately taking the kitten, she says citizens should observe the spot for a couple of hours, leave the area and return to evaluate any physical changes to the kitten. She adds citizens should search for signs of a mother cat before deciding to take the kitten home or bring it to the shelter.

“If you come upon kittens, and you see that the mom is dead, or you witnessed mom die, then you have a pretty good assumption that the kittens need to come in [to the shelter],"Proler says. "If you come across a kitten or kittens and they look very dirty, if their eyes are crusty or goopy, if they seem to be limping or have fleas, or if they're crying constantly, like meowing constantly, they are more likely not to have mom around."

To decrease the number of abandoned kittens in the community, Lilia Hughes, founder of Hays County Community Cats, thinks the best solution is to spay and neuter full-grown cats. To do this, she says it's important to trap the mother cat if she is around.

Hughes references the Full Circle program, a San Diego-based program which centers on ending the reproduction of kittens by stray cats which often end with dying, stolen or abandoned kittens. Hughes says for a program like this to work, people need to focus on the mother cats before they become pregnant, cutting off the chances of mothers producing litters with health risks.

“The number one question is, 'Are those kittens going to be safe?'” Hughes says. “Nobody wants to see kittens get killed or crushed, eaten or whatever, you know, and I think that's the reason that they find them, take them, grab them and take them to the shelter or give them away.”

The San Marcos animal shelter uses a foster system to take care of abandoned kittens, many of which require special care due to malnourishment. The fosters take care of these kittens' health and well-being, however, at this time of year when the shelter stays constantly full, Proler says the shelter seeks more fosters to help the multiple needs of all the kittens.

“We absolutely need more people willing to foster animals, foster kittens, specifically. We work with our fosters to find the kitten or a litter of kittens that work best for their lifestyle. So, some of our fosters are, like, out on the road, and they actually take kittens in a little box, and they put them in the passenger seat, and they feed them every few hours. It's a great life for a two-week-old kitten because they need care every two hours, and this person can keep them while they drive around,” Proler says. “Some folks, you know, they don't work from home, but they can come back for lunch, so they take care of kittens that are about four to five weeks old and six weeks old, who only need to be fed, something like four times a day, instead of every two hours or three hours. So, we always, always, always need more fosters."

Jennifer Hayes, a foster and volunteer with the shelter, is currently fostering a kitten and says she loves the shelter’s fostering program because it gives her a kind, charitable feeling.

“Fostering kittens is fabulous,” Hayes says. “It's very gratifying to see them become healthy and grow, so that they are able to find forever homes. It’s wonderful to be a part of that process of getting them out of the shelter into a loving, caring home where they can get individualized attention and socialization."

Hayes has been a foster for many of the shelter's kittens but doesn’t see herself adopting because of already owning a cat.

“I fall in love with every single animal who I foster, but I am fortunate in that I [own] a cat that doesn't like other cats,” Hayes says. “So, I know that they're going back. They're going back to the shelter or going directly into a home. Even if I didn't have that situation, if you adopt, then you don't necessarily have the room anymore to continue fostering and continue that life-saving process and, it’s really, I can't say enough how rewarding it is to help raise little babies like that.”

Another factor that pushes Hayes to be a foster is being a part of the kittens' lives at a time when they are growing up and in need of constant love.

“You get the joys of having adorable kittens without the long-term responsibility of having a cat for the next 10 to 20 years. You get continual kittens. If you choose to foster kittens, you can also foster cats. You get some of their best times when you’re fostering," Hayes says.

Anyone interested in fostering kittens or other animals can fill out an application on the shelter’s website. If approved, fosters can choose how many animals they would like to foster, and will be provided the essentials needed to foster their animal such as heating pads, kitten milk, milk bottles and medical assistance. Fosters usually keep the kittens between two and eight weeks, preparing the kittens to be healthy and ready for adoption.

For more information on how to adopt, foster, volunteer or what to do when finding abandoned animals, visit https://www.sanmarcostx.gov/203/Animal-Services. Animals up for adoption can be viewed on the shelter’s Instagram and Facebook.