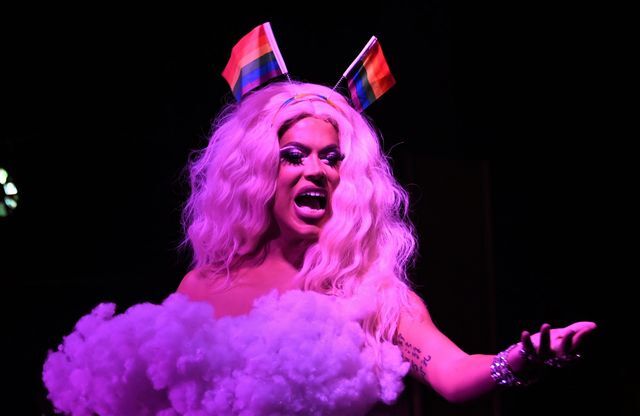 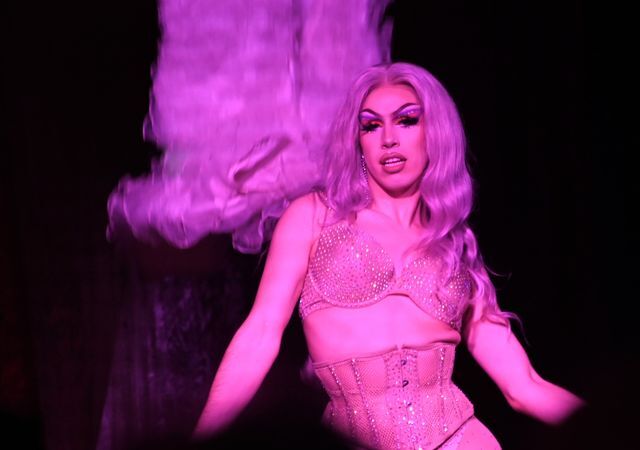 Anastasia Steel poses as a thrown cape falls to the ground, June 26, 2021, at Stonewall Warehouse. 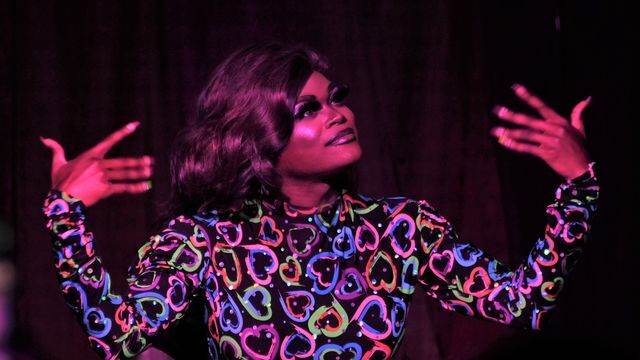 Between two prominent Texas cities, there's a small club with a big impact. At the entrance, a flight of stairs decorated in the rainbow colors of pride leads guests into a room full of performers, drinks and people of every shape, size and sexual orientation.

Stonewall Warehouse, named after the Stonewall Riots, a key catalyst of the late 1960s gay-rights movement, is the only LGBTQIA+ bar and club between Austin and San Antonio. Despite competing against the two large cities, Stonewall has made a name for itself among visitors and San Marcos locals.

Stonewall, a community filled with acceptance, is a club that accepts all visitors, no matter their sexuality, pronouns or identification; it's also known to host enlivening drag shows. The club was founded in 2014 by Chris Rue who wanted to give the gay community a safe space.

“He wanted to open it because there wasn't anything like Stonewall available to, you know, their community here. They always had to go to Austin or San Antonio. So, I know that was like the general idea of it to get it started," says Lena Jacobs, Stonewall’s manager and entertainment director.

Dr. Michael Casey, a senior lecturer in the Ingram School of Engineering, has been a faculty member at Texas State since 2008 and makes regular visits to Stonewall. He has made friends with many of the customers, workers and performers at the club. While he can't openly invite students to visit the club, he tells students they might see him there if they decide to pop in.

“I do mention it briefly," Casey says. "I teach two courses... the first two courses in electrical engineering and I come out to my students in circuits one, which is the first course. I do have a social life and it does involve stuff where I do go [to Stonewall] regularly. I know most of the queens that perform there on rare occasion."

"I tell my students all of this, so there's no secrets, and, you know, should they be old enough to come into the bar, they might bump into me, you know, and I tell them, they don't have to say 'Hello', but they're welcome to do so.”

As a member of the LGBTQIA+ community, Casey is a supportive member of PFLAG San Marcos, a nonprofit organization that unites LGBTQIA+ members and its allies to increase support. He also participates in some of the drag shows at Stonewall.

Behind his queen persona, Casey goes by the name Julia SugarDaddy, inspired by Julia Sugarbaker from the TV show "Designing Women", which Casey watched regularly throughout his childhood. Although Casey doesn't perform as consistently as other drag queens at the club, he plans to take the stage for his birthday on July 9 where he'll be performing three numbers.

“I really perform because I'm one of these queens, I don't do my own makeup, I hire it out, and that's fine. I'd much rather watch a show than perform most of the time, anyway, because it's fun to watch my friends up there on the stage performing," Casey says. "It's fun and, occasionally, I have students who might have wandered in and didn't even know I was performing, that they're watching their professor performing, you know, in at least partial drag."

While performers may dress to impress from head to toe, visitors aren't required to follow a dress code. The club has a laid-back approach, allowing its customers, as Jacobs says, to feel comfortable.

"We definitely don't have a dress code. I don't think half of our customers would be able to get in if we had it,” Jacobs says. “I think it's a very freeing space that you can be who you are and not be judged and, you know, have fun and just relax.”

Stonewall is open every night, except for Sundays and Tuesdays, from 6 p.m. to 2 a.m. Although the club is regularly 21+, on Thursday nights, anyone over 18 is welcome in for a $10 cover fee which goes to the drag queens performing that night.

Karaoke and trivia are hosted by Patrick Laferrell King every Monday from 10 p.m. to 2 a.m. King says Stonewall is a safe space where he and his friends can have a good time.

“I mean, we have everybody from anybody in the LGBTQIA+ community to, you know, people who are, identify as straight or whatever else," King says. "It’s a bar for anybody...it is a safe space for our community, but also it's like we accept anybody and everybody just, you know, come on and have a good time. We're not gonna be the ones that go, ‘Oh you have to be part of our community to come in here.’ No, it was always that place of us just going and having a good time and making, you know, memories and having a good time, regardless of who was hanging out with us.”

Throughout the year, Stonewall has had regular drag shows and lip-sync battles with various themes such as Rocky Horror Picture Show along with Britney Spears or Lady Gaga-inspired nights. It also hosts group RuPaul's Drag Race viewings. Jacobs says to celebrate Pride Month, the club has had many events and has donated money raised at these events.

“We've had different pride events all month long, giving different entertainers the opportunity to do their own shows. We haven't had the same show twice this month; it's been different groups and different casts, different drag queens. We have a burlesque troupe that did a pride show last week, and they donated all their tips, and we charge for their shows at the door," Jacobs says.

Ira Descent, a regular performer at Stonewall, has performed drag at the club for two years. She says when she first heard about Stonewall, she was puzzled to hear there was an LGBTQIA+ club in San Marcos.

“I saw somebody post about there being a bar in San Marcos, and I was like, 'Well that's interesting,' and my thought was what I feel like everybody even today has about it: 'There’s a gay bar in San Marcos?' So, I messaged them and said if they ever needed a special guest, and they said I could come to one of their shows and they liked me so much they kept bringing me every month," Ira Descent says.

To Ira Descent, Stonewall stands out from other LGBTQIA+ clubs in Austin and San Antonio. She says she feels appreciated as an entertainer and has fun with the audience while performing at the club.

“Performing in San Marcos, since there are no other bars like that, a lot of times it’s the community's first exposure to drag," Ira Descent says. "They live for everyone no matter what you do or who you are, and that's just something I'm not accustomed to in Austin or San Antonio because they're kind of jaded to the drag scene. They have fun, but it's not on the level of San Marcos. San Marcos was the first, especially at Stonewall, was the first bar I felt like that I wasn't a bad entertainer, and so, then, ever since, then I've been there for years.”

"[Drag queens have] since been able to go to different opportunities, different venues around San Marcos, but they all converge back at Stonewall. It's the root of everything, that basically starts there and branches out," Ira Descent says.

Casey explains the small drag community in San Marcos is tight-knit, and the queens look out for each other beyond the stage. The community sticks together through the hard and good times.

“I remember, in particular, we came together very explicitly in late 2016 when, right after the presidential elections, one of the queens was attacked, walking back to her car," Casey says. "For a while there I was one of those people that if a queen needed to go between the bar and her car, she was not going to go by herself, and if she happened to be by herself, I would go out to the car and escort her out or vice versa. Thankfully, that was an isolated event, but it made us very aware that there are these elements in San Marcos, and they are still there, even today, and it is a kind of community of sorts. So, I mean, I get it, it's where a lot of us see each other and we see each other regularly. “

As newer performers get the chance to take on Stonewall some queens, like Ira Descent, try to remember that they were once beginners, too. Ira Descent aims to make sure new drag queens get the same opportunities she got, helping them to continue growing the San Marcos drag community.

“I was in San Antonio doing a show, and somebody came up to me and said, ‘I need to go to San Marcos, I need to do Stonewall’, like, it's starting to become a thing where people are seeking it out. It's no longer just like a little hidden gem, it's starting to get, well not starting to, it has been a lot more popular," Ira Descent says. "It's always been busy, but now it's getting more well known outside of the city, and I think that's something that will help create a long legacy."

As Stonewall progresses and makes a big name for itself in a small college town, Jacobs hopes all its visitors and performers will remember that it will continue to be a safe space for them.

“I just hope that it continues to grow and, you know, be the best it can be and be the best place for the community to have," Jacobs says. "We just want them to have somewhere special and their own that you know, not everywhere has, so that's what I want. It's not just a bar to me, a lot of the customers and a lot of the drag queens are very special to me and, you know, they're like kids to me that I want to take care of.”