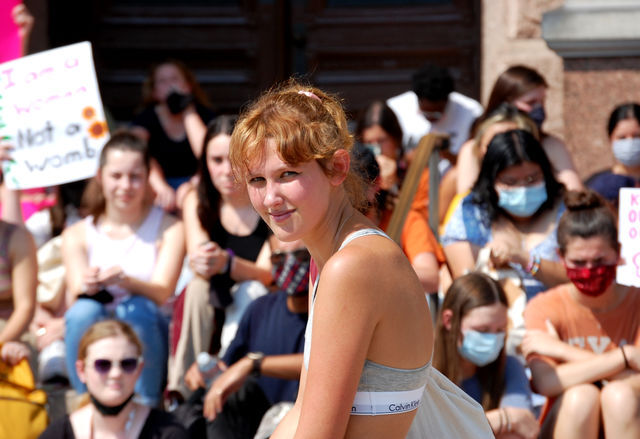 Riley Belcher, a pre-nursing freshman, speaks on the importance of voting at the pro-choice protest she organized, Friday, Sept. 10, at the Texas Capitol. 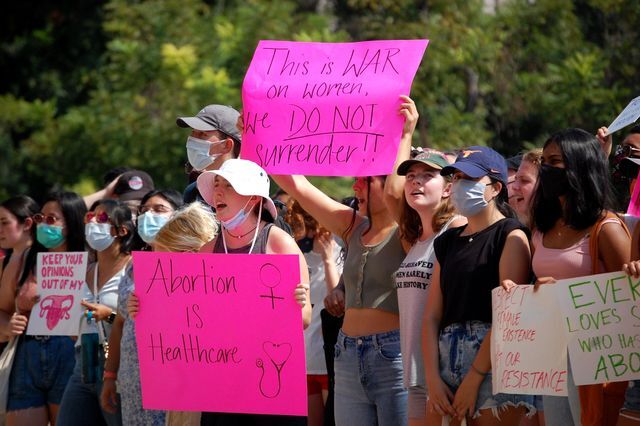 Students from Texas State and the University of Texas at Austin join together to protest the "Heartbeat Bill", Friday, Sept. 10 at the Texas Capitol.

Riley Belcher sat among somber faces and silence in the center of the Texas Capitol.

She, along with other demonstrators, surrounded the inside and outside steps of the building with decorated posters, protesting the passing of Texas Senate Bill 8, one of the nation’s strictest anti-abortion laws. The bill was approved by Gov. Greg Abbott in May and went into effect on Sept. 1.

The bill, also known as the "Heartbeat Bill," prohibits abortions once a fetal heartbeat is detected during an ultrasound. This usually occurs between five to six weeks after pregnancy, which is before some people even know they're pregnant.

The circumstances of the bill also applies to individuals who are impregnated from rape or incest, but there is an exception for medical emergencies. In addition to banning abortion after six weeks of pregnancy, the bill allows individuals to sue medical offices or anyone who assists in helping someone obtain an abortion passed the six-week period.

Inspired by the mobility of pro-choice supporters across Texas and angered by what felt like a grab for her individual rights, Belcher, a pre-nursing freshman, organized a rally to protest the passing of the bill.

“I’m protesting for the safe and legal access to abortion,” Belcher said. “How can you say, ‘my body, my choice’ when it comes to issues like public health and COVID, and then take away women's rights to choose?”

After taking part in a protest over the summer led by Feminist Action Project, a student-led gender justice activism group at the University of Texas at Austin, Belcher was inspired to organize her own protest led by fellow Texas State students and people in Austin. With the help of Feminist Action Project, Belcher spread the word of the protest across Texas State and UT.

Nearly 100 young adults filled the rotunda of the Texas Capitol on Sept. 10 to join the demonstration and protest Abbott's decision to sign the bill into law. The protest began at 2:30 p.m. and lasted until 5 p.m. Those present peacefully sat on the floor of the rotunda and displayed signs advocating for an individual's right to an abortion, even when the time period presented in the bill has passed.

After protesting silently inside the Capitol, Belcher led the group outside to the steps of the building where demonstrators held signs and shouted chants such as “my body, my choice” and “Governor Abbott you can’t hide, you don’t care if women die.”

Among those protesting was Kenna Lookingbill, a human development and family sciences sophomore. As someone who is adopted, Lookingbill said she is often pressured to be anti-abortion.

Lookingbill doesn't see her adoption as a reason why abortion is unnecessary or wrong. In her eyes, though her mother chose to carry out a pregnancy, the important part was that she had the freedom to choose.

The freedom of individual choice was an act fellow protestors also advocated for. Jazmin Guevara, an education senior, said she witnessed her mother, who had her first child at 16 years old, encounter the hardships that come with raising a child at a young age.

While her mother managed to overcome these hardships, Guevara doesn't believe it's fair to expect every person who gets pregnant to go through those same experiences and live a life they do not want or are not prepared for.

“That's what's important, you know, for women to have the choice to do what they want in their life. So, it's just not right for the government to take that choice away. It's a medical procedure. It's between the patient and the doctor,” Guevara said.

As the demonstration continued, protesters shared personal experiences that motivated them to advocate for abortion access. Many shared vulnerable stories of coercion and rape, asking why they should have to fight for the choice to have an abortion when pregnancy itself isn't always avoidable. Still, many addressed the idea that even in situations where pregnancy is a result of consensual acts, there should be a right to choose.

Throughout the protest, Belcher delivered speeches that stressed the importance of voting. While she will still be too young to vote for the next few months, she urged protesters to register to vote and participate in the upcoming elections, supporting candidates who respect the right to choose.

Though she isn't sure whether she will organize another protest in the near future, Belcher plans on attending more events advocating for the right to an abortion. She aims to continue encouraging people to exercise their civic duty and vote in each election for the changes they wish to see.