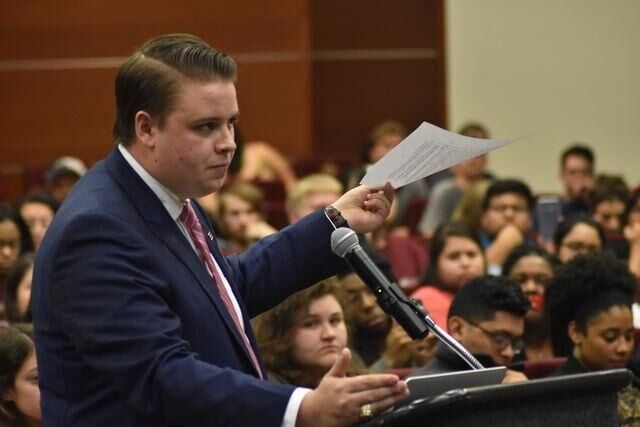 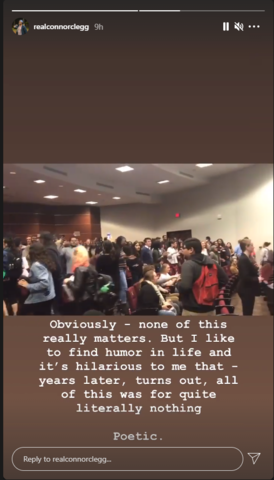 Texas State's Student Government Senate voted to uphold its previous overturning of the impeachment of a former president and expelled its parliamentarian during its Feb. 22 meeting.

After an unanimous acquittal by the student Supreme Court, student protests and a suggestion of a possible override of the court’s decision by the university's former Dean of Students, Clegg was impeached and removed from office on April 16, 2018. The impeachment passed with a majority vote and over six articles of impeachment during a joint session of the Student Government Senate and the Graduate House of Representatives.

The articles cited Clegg’s call to defund The University Star over its "Your DNA is an Abomination" opinion column, on the Student Government’s Twitter account, as well as offensive and racially insensitive Instagram posts made by Clegg in 2017.

When asked by Sen. Quieraney Belvin why upholding the reversal of the impeachment of Clegg is pertinent to the Texas State community, Matthew Smith says the resolution is about “[setting] the record straight" and that the university should not have interfered in Student Government business.

He adds that the Court unanimously decided on Feb. 27, 2018, that Clegg was not guilty of any violations and the Senate should support the institutions of the Student Government.

“He was impeached over crazy, wrong procedure and bad political actors who are using their weight and violence to make other people bend to their will,” Matthew Smith says.

Several senators who voted against the resolution expressed distaste with the measure. Those who voted in favor of the reversal rallied in defense of Clegg’s character.

Vice President Andrew Florence threatened to rule interruptions and unnecessary activity in the Zoom chat out of order if they continued.

Sen. KeAirra Haynes says the resolution disrespects the Black and brown communities on campus, adding that its passing would provide definitive proof that the Senate is not concerned with representing the majority of students at the university.

“I can guarantee that a vast majority of people on this Zoom call right now were not at those protests we held, were not at those sit-ins we held, talking about and going against and protesting against what Connor Clegg had said on social media and his actions in the Senate,” Haynes says. “It just feels like this piece is invalidating our feelings when we're already an underrepresented population at Texas State.”

Sen. Jared Smith says Clegg's actions do not define who Clegg is as a person, adding The Star is just as bad as Clegg for publishing the opinion piece which sparked Clegg's tweet in the first place.

"I've seen Connor Clegg here and there, [and] I don't condone him being a racist at all," Jared Smith says. "He's been first class to everyone I've encountered. He's first class to me. We all make mistakes in this world. We're all not perfect. But if y'all are condemning him to be a racist, The University Star's just as bad... I'm Catholic, by the way, too, and I'm half Hispanic. Those statements [by] Connor, that's not truly him and that's all I have to say, just use fair judgment."

Clegg reacted to the resolution on his Instagram story in the early hours of the day following the Feb. 22 meeting. Current and former senators and Texas State organizations alike also reacted to the news on Twitter.

As one of the former student senators who voted not guilty in 2018, I am SO proud of these Senators that voted to acquit. It was a sham impeachment forced by the dictatorial Dean of Students and now the record is finally set straight. It’s a great day to be a Bobcat. https://t.co/1Th8CNWnX5

President Catching Valentinis-Dee implored the body to remain civil when discussing the resolution. Soon after, he muted the entire body to say a few words after several senators exchanged interruptions.

“We're talking about a presidency in the past, a previous student government,” Valentinis-Dee says. “You can take whatever position you want on what we're doing right now, but right now we're talking about the legacy of something else. I'd really prefer that while we're having this discussion that we don't leave another legacy that needs to be brought up in the future, one way or another. Please, keep your wits about you. Be respectful. ”

Parliamentarian Cody DeSalvo, who is responsible for maintaining order at meetings and assisting with debate and discussion, underwent expulsion from the Student Government Senate in a 22-10 vote. This was after an initial motion to censure him for the remainder of the meeting passed 24-10.

DeSalvo was previously removed from his position as a parliamentarian on Oct. 26, 2020, after a 13-13 tie during a vote of no-confidence broken by Florence. DeSalvo filed a complaint against Florence over unforwarded Senate meeting attendance records, leading Matthew Smith to draft the vote leading to DeSalvo’s removal.

After DeSalvo filed an injunction request and an additional complaint, the Student Government Supreme Court reinstated him, ruling the vote failed to clear the constitutionally required threshold of a two-thirds majority, rendering the vote void.

Matthew Smith, who also drafted the resolution calling for DeSalvo’s expulsion, justifies the vote on the grounds of alleged collusion between DeSalvo and Court members to prevent legislation from passing, citing the Student Government Constitution Article Two, Section 1, K to be “compassionate, benevolent, and fair.” Matthew Smith also says DeSalvo has “misrepresented the will of Student Government on social media.”

Some senators, including Sen. Serenity de Leon, asked for concrete evidence of collusion. Matthew Smith states there is no concrete proof yet, explaining why the resolution called for DeSalvo’s expulsion and not impeachment. Expulsion prevents DeSalvo from being in Student Government for a year, while impeachment would permanently bar participation in any form of Student Government.

de Leon says senators have a right to their personal opinions as members of the student body, and their personal accounts on social media are a way to be transparent about the Senate’s operations.

Sen. Neva Sjule says she does not feel comfortable voting on the resolution without evidence, saying from observations of Matthew Smith’s voting record and how “very fond of tabling these discussions and pieces of legislation” he is, it would logically lead to tabling the resolution to await proof.

Sjule then asked Matthew Smith if he would respond similarly if other senators received the same allegations as DeSalvo.

“If the author can convince me of the validity of the allegations, then yes,” Matthew Smith says.

The Senate debated the resolution in an executive session, exclusive to members of the body and Florence, as per code. The resolution, like others concerning the potential expulsion of Senate members, would be voted on publicly after the private session.

A resolution, authored by Matthew Smith and sponsored by every senator who voted to expulse DeSalvo, known as the “Checks and Balances Act”, established a committee to investigate alleged collusion between the Court and senators passed 21-8. The committee will have “unlimited subpoena power” to discover “how deep the corruption goes.” The committee will be chaired by Lewis. The resolution lists the following senators as members of the committee and will have the ability to add more senators “if deemed necessary”:

No senators voting against the expulsion of DeSalvo were initially included. Sjule asked Matthew Smith of examples of collusion, to which Matthew Smith cited the overturning of the vote of non-confidence against DeSalvo.

Sjule questioned the exclusion of members not within Matthew Smith’s usual voting block and the reasoning behind the appointments. Sjule implied some members on the committee could be persecuted on the same grounds as DeSalvo.

“I [and others in the Senate] feel that even some of the senators on this list, in this piece of legislation, they could also be suspect for collusion,” Sjule says. “How can this committee not itself be a gateway to further collusion within the Senate?”

Matthew Smith says he selected members based on their committee experience and added “new blood” as well, and by the time he made the list he did not want to include many more as “it would just be a second Senate.”

Sjule motioned for an amendment to include herself, Belvin, Oles and Reed to the committee. The resolution passed with its amendment 21-8.

In other business, a resolution written by Senate Leader Quintin Lorenz in support of personal pronouns unanimously passed 28-0. The resolution aims to “not [interfere] in the use of preferred names and pronouns of [Texas State] students.”

The resolution is similar to the one calling for “preference-based naming in university systems" written by DeSalvo; however, it was indefinitely tabled along with several other pieces of legislation during the Jan. 25 Senate meeting at the behest of Matthew Smith, who referred to the bills as “pointless” and did not want to “waste his time voting on each piece individually.”

A resolution calling to establish the Silkies Run as an official university event unanimously passed 28-0. The run is hosted by the Veterans Alliance of Texas State to help prevent veteran suicides with humor and “unconventional therapy”. The next run is scheduled to take place on March 4. More information can be found on the Silkies Registration website.

Reed’s resolution calling for the expansion of the Bobcat Bobbies service to sororities near campus unanimously passed 28-0. Rogers says the Bobcat Bobbies do not sufficiently service people with disabilities on campus. Reed concurred with Rogers, saying it would be a good addition to the bill.

Texas State is in the process of reviewing Gov. Greg Abbott's executive order lifting the state-wide mask mandate and capacity restrictions but will continue to require students and faculty to wear face masks and social distance on campus.

In a statement to the county, Hays County Judge Ruben Becerra expressed disapproval of Gov. Greg Abbott's statewide March 2 announcement of an executive order that will lift the state-wide mask mandate and increase the capacity of businesses and facilities to 100%.

Black-owned beauty: The power of female entrepreneurship at Texas State

Texas State Athletics is prized and celebrated within the San Marcos community, with people coming together every weekend to collectively watch young student-athletes compete in sports.

The bone-chilling temperatures and icy conditions of February's winter storm reminded Christopher Cardoza of a time when he spent nights outdoors freezing, praying for daylight to come.