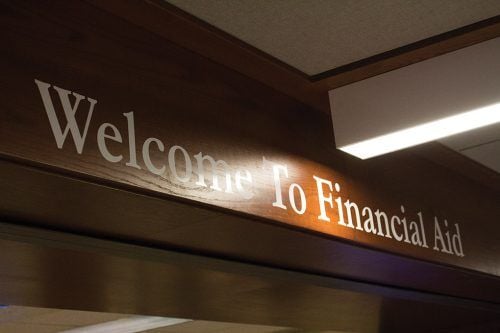 The financial aid office, welcomes students into its space in the J. C. Kellam Administration building. 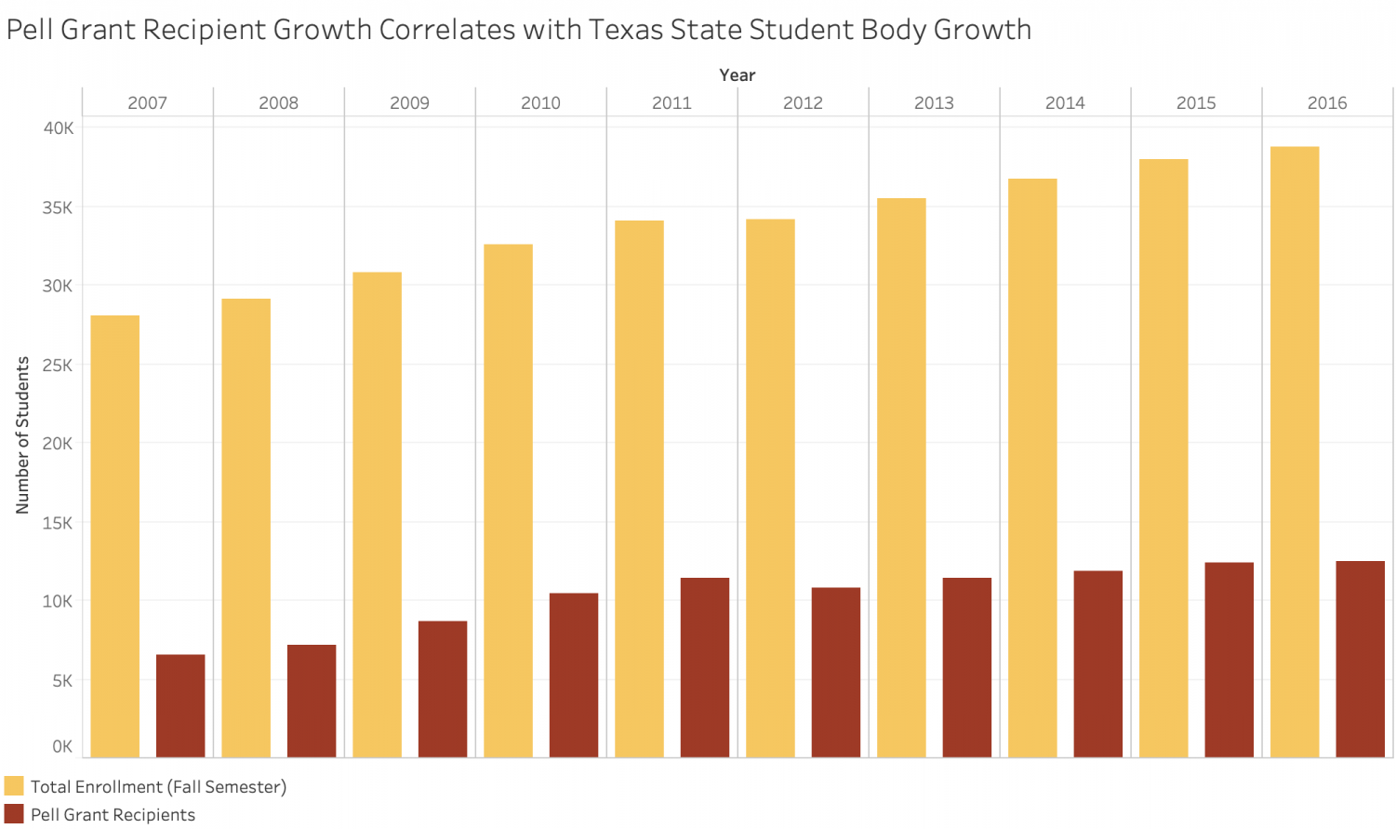 Chase RogersIn 2007, 23% of the total student body were Pell Grant recipients. This portion of the student body grew to 32% by 2013—where it has hovered since. Data provided by the United States Department of Education. 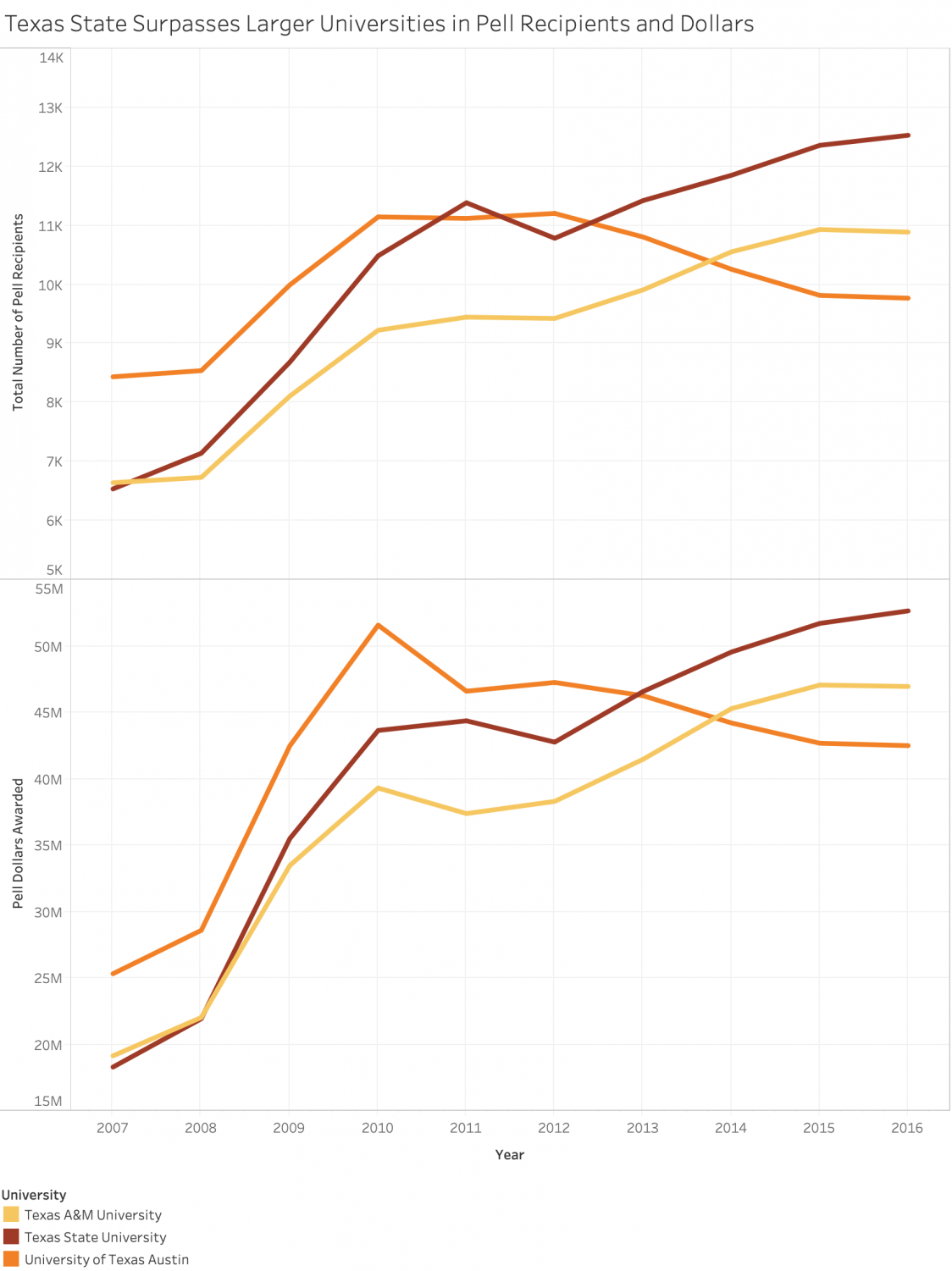 Chase RogersTexas State surpasses the first and second-ranked universities in Texas by enrollment (Texas A&M and University of Texas). Data provided by the United States Department of Education. 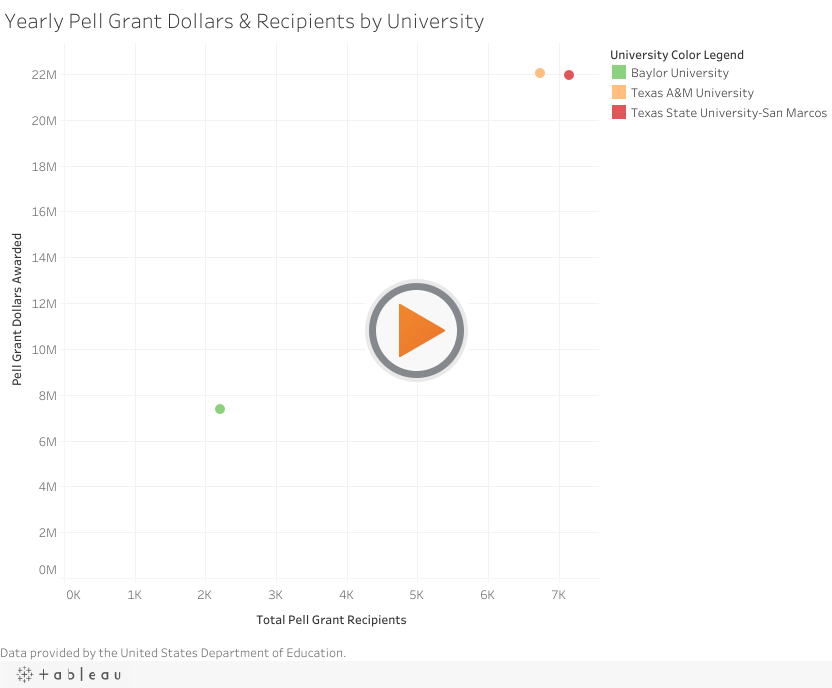 According to the U.S. Department of Education, Texas State rose from 10th to fourth place in total Pell Grant awards given to students in Texas among four-year universities from 2007 – 2017. The university also made advancements in total Pell Grant recipients, moving from ninth to fifth in the state of Texas during the same time period.

Pell Grants are federal funds allotted to students with the goal of making higher education more obtainable for those who lack the financial means to pay their tuition comfortably. The amount provided can vary based on the applicant’s financial need, costs to attend school, status as a full-time or part-time student and plans to attend school for a full academic year or less. Prospective students are automatically considered for Pell Grants predicated on their Free Application for Federal Student Aid submission.

According to data acquired from the U.S. Department of Education, Pell Grant awards and recipients increased from 2% and 10% from the 2008 school year to 2017. This increase correlates with the growth of the university student population, the university reporting 27,509 enrolled students spring 2008 and, now, reporting over 38,000 in 2016.

Director of Financial Aid and Scholarships at Texas State Christopher Murr said change can be partially attributed to the growth of the university over the last decade.

“We do have a growing enrolment at this institution—over the past 10 years—and you’d expect some of that growth to be based on that overall enrollment growth,” Murr said.

“(Texas State is) seeing more higher needs students enrolling, and I think that is reflective of the university being a very diverse institution in terms of student enrollment,” Murr said. “We’re at a university where we have many students that have a high financial need so they are able to access higher education.”

Hannah Durrance, history graduate student and instructional assistant, was a Pell Grant recipient during her undergraduate studies. Intermittently throughout her studies, Durrance struggled with homelessness and subsequently found it difficult to afford her tuition at Texas State. She said she was only able to attend Texas State due to the Pell Grants she received.

Murr said Pell Grants, in tandem with other financial resources for students, are sometimes determinant on whether or not the student is able to attend college.

“Some students are often coming from families that, due to no fault of their own, are struggling financially and if it weren’t for the Pell Grant their opportunities to attend Texas State would be more limited,” Murr said. “For a lot of students (grants) make the difference between their ability to or not to attend Texas State.”

Pell Grant recipient Alexis Duran, consumer affairs junior, said the additional funds ease the burden of budgeting for her and her family when purchasing school supplies and other essentials.

“There is way less stress on me and my mom when paying for college and everything,” Duran said. “I now have more room and space in my budget to focus on other things like textbooks, food and other things.”

More information on grant and scholarship opportunities at Texas State can be found on the Financial Aid and Scholarships website and by utilizing Texas State’s Bobcat Online Scholarship System.

James Rex, economics senior, contributed to the data analyzation in this article.