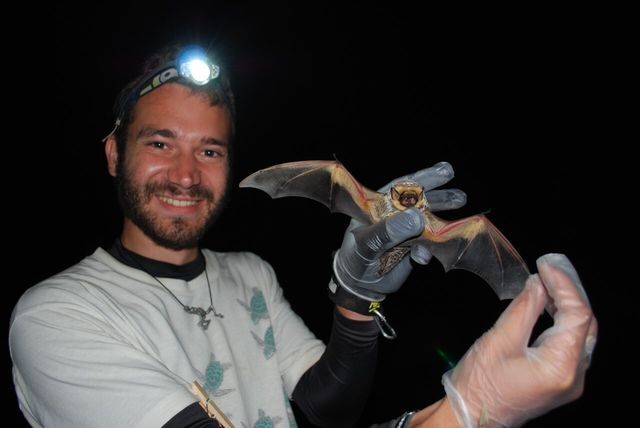 Texas State Ph.D. student Elijah Lee is a part of the bat conservation project at the university and frequently works with bats with white-nose syndrome. 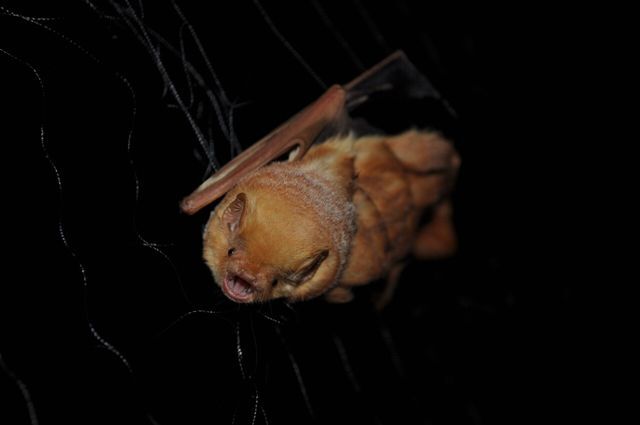 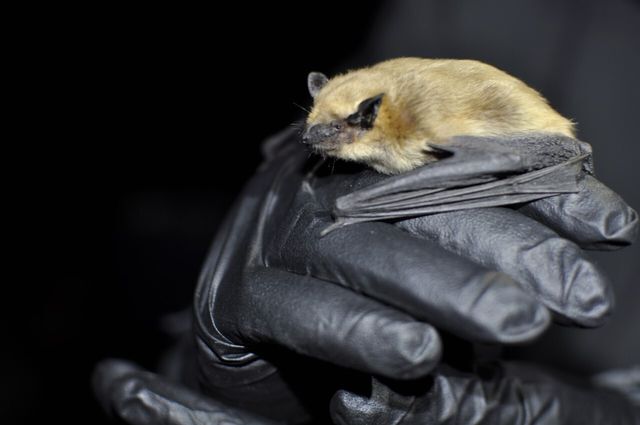 The disease is caused by a fungus, Pseudogymnoascus destructans, which is introduced to bats' hibernation caves by humans. 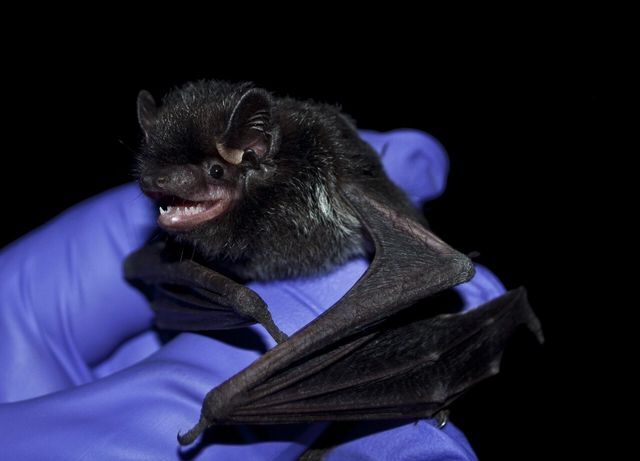 Sarah Fritts, assistant professor in the Department of Biology at Texas State University, says that white-nose syndrome is capable of completely decimating a local bat population.

Texas State researchers studying white-nose syndrome, a deadly threat to native bats in Central Texas, are looking into the potentially devastating effects of the disease on local bat populations and their surrounding ecosystems.

The effects of the fungus on American bats were first detected in 2007, in the northeastern U.S. Biologists began to notice whiteness around the noses and mouths of bats in the area.

They also began to note an abnormal increase in the number of dead bats with white noses. Bats were found during their hibernation season, a time when there should have been a decreased amount of bat visibility.

Sarah Fritts, assistant professor in the Department of Biology at Texas State, has been researching bats with the syndrome and the different ways to combat the negative ecological effects. She says bats are difficult to obtain and examine, making it hard to determine the cause of any bat-related health problems.

“It just hit us in 2007, so there hasn’t been a lot of time for us to get a lot of research done about how it’s affecting bats, what the mechanisms are or what species it affects more,” Fritts said. “However, we do know that it’s not the actual fungus itself that kills them. What the fungus does is affect the bats’ hibernation."

Fritts says when bats hibernate, they decrease all bodily functions, meaning they don't eat or drink as much; however, when they get WNS, it wakes them up from hibernation, a time when food and water are scarce.

"They slowly deplete their fat reserves and basically starve to death,” Fritts said.

The fungus that causes WNS was detected in Texas caves in 2017, leading researchers to worry about the local bat populations, Fritts says.

“We knew then that it was probably going to start affecting our bats,” Fritts said. “There’s usually a lag time of a couple of years between the time we first see the fungus and when it starts affecting the bats, so it’s really just a waiting game for us, and after this winter, we think it might spread to other species.”

Fritts says researchers have observed that any bat population that hibernates in a cave afflicted by the fungus or that comes into contact with another bat-diagnosed fungus is susceptible to contracting WNS.

“We do know that it can travel bat-to-bat, and bats are very social animals. We have some caves here in Central Texas with about 20 million bats in them,” Fritts said. “There are lots of different bat species here, one of the most beloved being the Mexican free-tailed bat, and these bats are big migrators, and most of them migrate to Central and South America, but the Cave Myotis is one of the species that does hibernate here in Central Texas, and that’s the one that we’ve seen the worst effects on so far.”

WNS can be a disaster for a bat population; however, Fritts says this does not mean complete decimation is certain.

“There are some species and populations that have had 99% declines, just die-offs of complete species in some areas. Whereas other species, we can swab them with a q-tip and see they have the fungus on them, but they’re not dying or at least not dying at the same rate as other species,” Fritts said.

Elijah Lee, a doctorate student at Texas State who has been working with bats and WNS for several years, has observed a situation like this first-hand while working with bat populations in other states.

Researchers initially thought WNS would not be a threat to bat populations in Texas. This belief was based on the fact that native bats hibernated differently than bats in the north due to the comparatively mild winters Texas experiences.

Nathan Fuller, a statewide bat specialist with Texas Parks and Wildlife, has been working with WNS for the past 13 years and witnessed a large die-off of bats.

“In Texas, a biological winter really only happens in, say like December to February. So, we thought that there wasn't going to be much of an impact on our data, but it turns out we were wrong,” Fuller said. “We had a pretty big die-off of animals last year, so almost 20 counties in Central Texas reported dead Cave Myotis bats. People were finding them in their front yards on their mailboxes and trees, things like that, during a time where there really aren't that many out there.”

To combat this and help conserve the bat populations, Fritts says a multitude of projects are currently underway, including monitoring select species statewide by deploying acoustic detectors that pick up the bats’ echolocation calls.

Bats have the unique ability to sense their environment through echolocation calls, but each species of bats has a slightly different call. Fritts says scientists use microphones and detectors to differentiate between calls. They then analyze the data and use it to track their movements and distributions across the state.

“When we do this for the next years, we can start getting accurate tracking, and we will be able to finally see how white-nose syndrome may be affecting the populations here," Fritts said.

There have been efforts to fight WNS in more direct ways, Lee says, such as cleaning caves of the fungus while bats are not hibernating, as well as trying to use fungi or other microbes that already exist in the caves.

"One of the big challenges is that cave habitats are really delicate, so you don’t want to introduce something that’s going to take over the system,” Lee said.

A problem Lee has observed with using these methods is that so little is known about where hibernacula are located.

"Some bats hibernate in places we don’t even know about, so you may be able to scrub one cave clean or take care of one bat population, but they’re going to disperse over the landscape, interact with other bats and probably bring it right back,” Lee said.

Because of this, Lee believes acoustic monitoring is the best option for combating the syndrome; however, Fuller says it has become almost impossible to prevent the bats from succumbing to the syndrome.

“In some cases, you just have to sit back and let natural selection occur. This is called evolutionary rescue. You have some animals that are resistant to disease in some capacity, and those are the ones that will survive and go on to breed.” Fuller said.

Fuller says another big problem bat conservationists face is that evolution does not always have time to catch up. This is because the population decline in bats hit by WNS is so intense.

"Evolutionary rescue doesn't work if there are too many that are dead, which is why our goal is to create some breathing room and prevent massive declines from happening so that the natural processes of natural selection or evolutionary rescue can take place,” Fuller said.

Fritts believes WNS could have a long-lasting negative ecological impact on the environment and other species as well.

“Bats eat a lot of things like insects and other pests, but a lot of animals also eat them," Fritts said. "Predator animals like owls, snakes and hawks eat them, so if we lose bats, we could lose this really important part of the ecosystem for other vertebrates as well.”

WNS is believed to have been introduced to the ecosystem by cavers, Fritts says. The cavers did not realize accidentally introducing the fungus to a cave where bats hibernate would lead to these unfortunate circumstances.

“We have to be careful as humans because the fungus that causes WNS can get on our shoes, and it can get on our clothes, and so if people go into one cave and want to go into another, they really have to disinfect themselves,” Fritts said.

Fuller believes getting informed on the situation at hand and donating money to conservation organizations, such as the Wildlife Conservation Society and Bat Conservation International, are some of the best things the general public can do to combat WNS. These organizations fund research that can have a positive impact on bat populations.

“I ask people to be vigilant,” Fuller said. “Be aware of what’s around you and be willing to be a steward of your area so that we don’t lose our bats.”