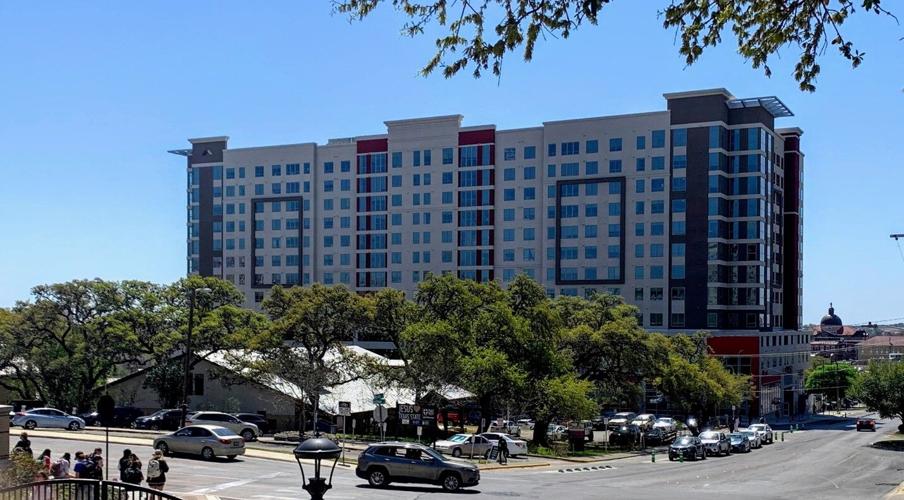 Passenger cars travel down Wood St. and North Guadalupe St. on March 30, 2022. According to the EPA's 2022 annual report, passenger cars are the largest contributor of transportation related greenhouse gasses in the United States. 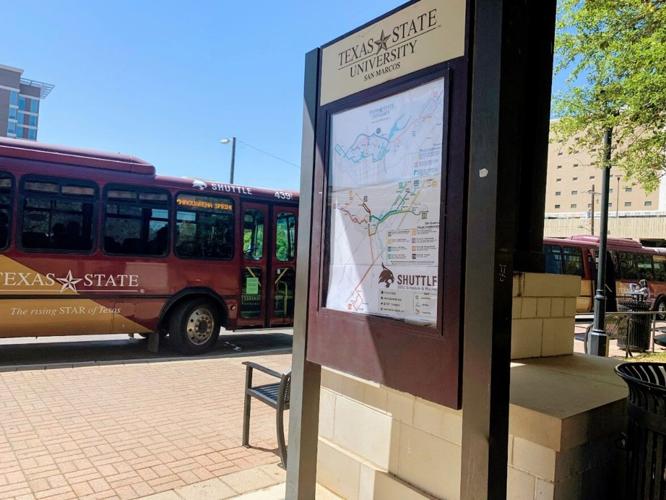 A Bobcat shuttle pulls up to its stop near Jones Dining Hall on March 30, 2022. Bobcat shuttles offer a more sustainable method of transportation for members of the Texas State community.

Passenger cars travel down Wood St. and North Guadalupe St. on March 30, 2022. According to the EPA's 2022 annual report, passenger cars are the largest contributor of transportation related greenhouse gasses in the United States.

A Bobcat shuttle pulls up to its stop near Jones Dining Hall on March 30, 2022. Bobcat shuttles offer a more sustainable method of transportation for members of the Texas State community.

As new information about carbon dioxide is released, Bobcats are being proactive in using alternative transportation to reduce carbon emissions and live sustainably.

According to the EPA, passenger cars are responsible for 40.5% of carbon dioxide emissions in transportation, which is one of the primary greenhouse gasses to which scientists attribute climate change. If highway construction and consequent traffic are a sign of anything, it is that passenger vehicles are the primary form of transportation in San Marcos.

To reduce that need for passenger vehicles, the City of San Marcos created a contract with the Capital Area Rural Transportation System (CARTS). A way in which CARTS is sustainable is its use of clean diesel-burning units, which reduce air pollution and are less toxic to breathe. They also use a mix of liquid propane gas which burns cleaner gasoline and emits fewer toxic substances and pollutants into the air.

According to San Marcos Transit Manager Peter Binion, CARTS is the unifier for transportation like Greyhound Station and Amtrak in San Marcos to get locals and Bobcats wherever they need with ease.

“It’s about equitable access to a bunch of different places in the community,” Binion said. “The city service needs to consider 100 different locations and pick a handful.”

CARTS is not the only transportation organization working to offset Bobcats’ needs for passenger cars. Texas State offers one of the most easily accessible options for students, the Bobcat Shuttle.

The availability of the shuttle is convenient for Bobcats' sustainability, reducing the inflow of passenger cars on the Texas State campus and helping Bobcats reduce their carbon footprint. The shuttles are financially supported by the $95 student bus fee collected from registration each semester.

The Bobcat Shuttle's main purpose is cross-campus and apartment travel, although Transportation Services Director Steven Herrera said Texas State hopes to expand to meet transportation needs across San Marcos. The details of this collaboration are still being figured out according to CARTS General Manager David Marsh.

"That's a matter we've been trying to deal with since 1965," Marsh said. "The two systems are so divergent in the needs they serve. San Marcos is really important in our system because of its connection."

For now, Texas State and CARTS have collaborative routes for Bobcats traveling to Austin, the Express Gold Route, and the Yellow Route.

Of all the alternatives that the San Marcos offers, trains are the most environmentally friendly by EPA standards. In the 2020 EPA report, transportation by rails was shown to encompass only 2.2% of national transportation-related greenhouse gas emissions, emitting 38% less carbon dioxide than passenger cars. Amtrak uses fuel-efficient, clean diesel, as well as hydro and electric renewable sources to run the trains.

In order to do more to reduce their carbon emission and adapt to the changes that have already begun to happen as a result of climate change, Amtrak has been working to implement a Climate Resilience Strategic Plan.

According to Marc Magliari, public relations manager for Amtrak, the railroad company plans to reduce its carbon emissions by 40% by 2030. Some of the ways they hope to achieve this are the implementation of EPA-compliant Tier 4 locomotives, which reduce emissions by 65% to 85%, reduction of packaging waste, as well as increased frequencies so that customers can make the more sustainable decision with ease.

“The train runs three to five days a week, so what can we do for our customers? We can run twice or even six times a day,” Magliari said.

Currently, the Amtrak trains that run from the San Marcos Station follow the Texas Eagle train route, which travels from Los Angeles, through Texas, to Chicago. The company hopes to expand more into the Southwestern states in the future.

“Every mode of transportation is supported by taxpayers,” Magliari said. “Our government sees what we need then makes investments, which right now the majority of which is roads construction, upkeep of the roads, monitoring the roads and it isn’t the cheapest or easiest alternative as people have been led to believe.”

For more information on public transportation in San Marcos, visit its website or the Texas State Transportation Services website.