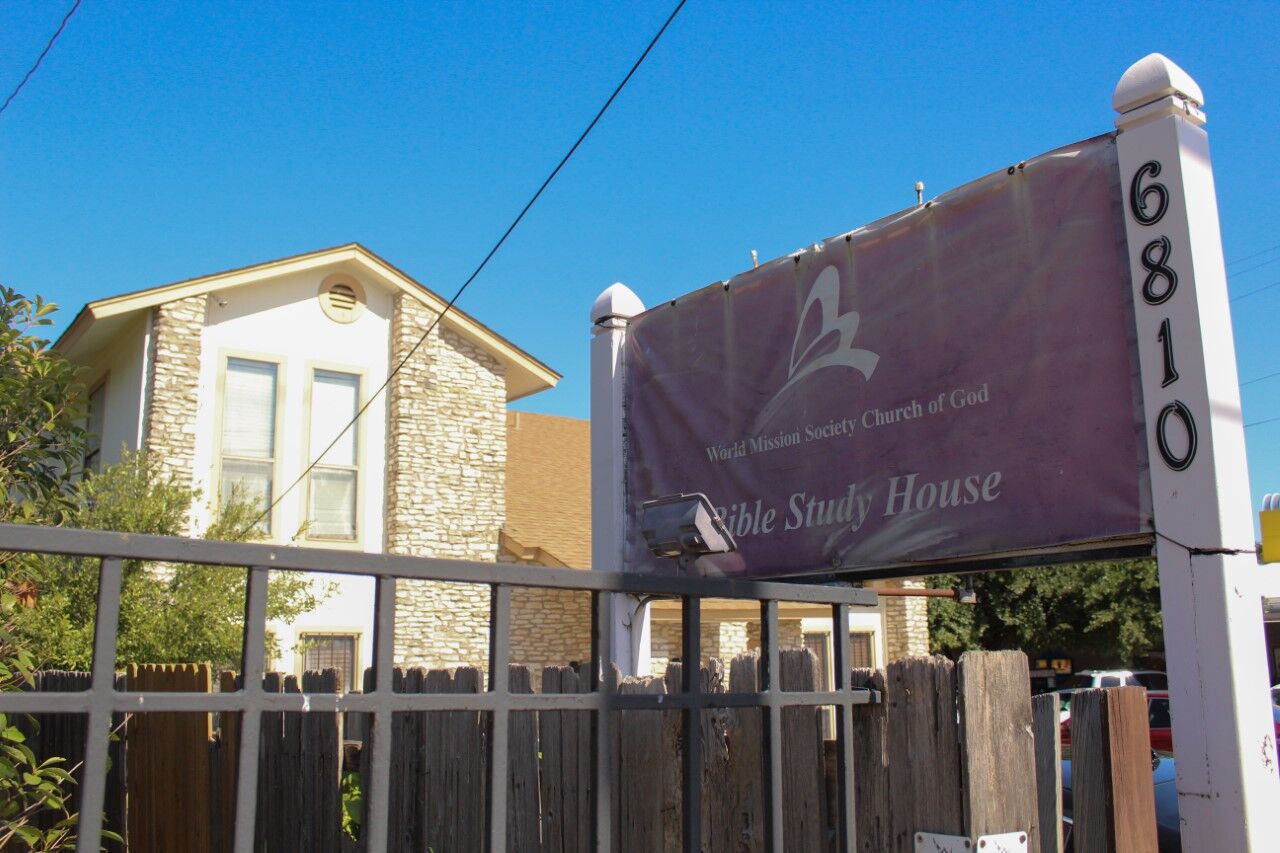 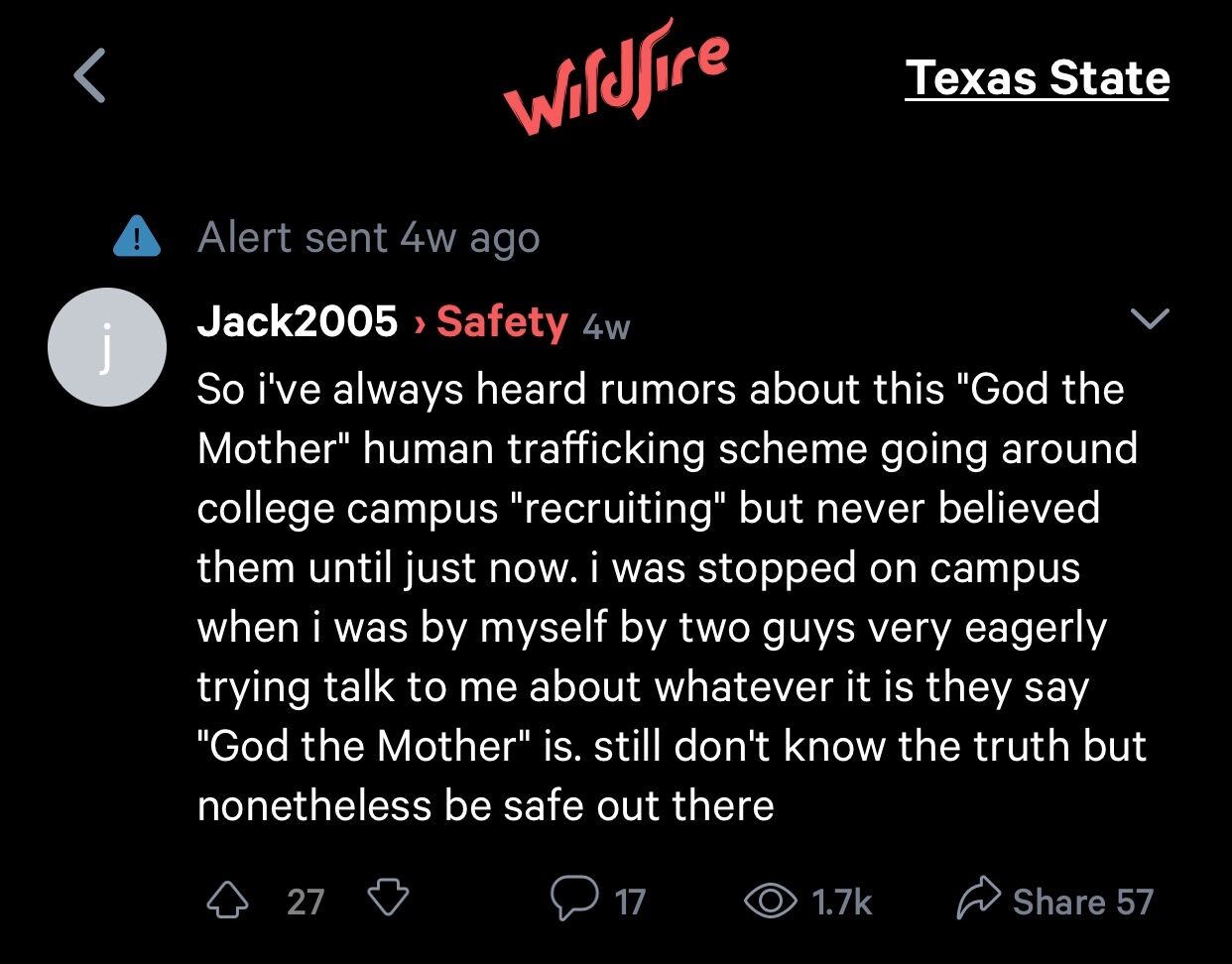 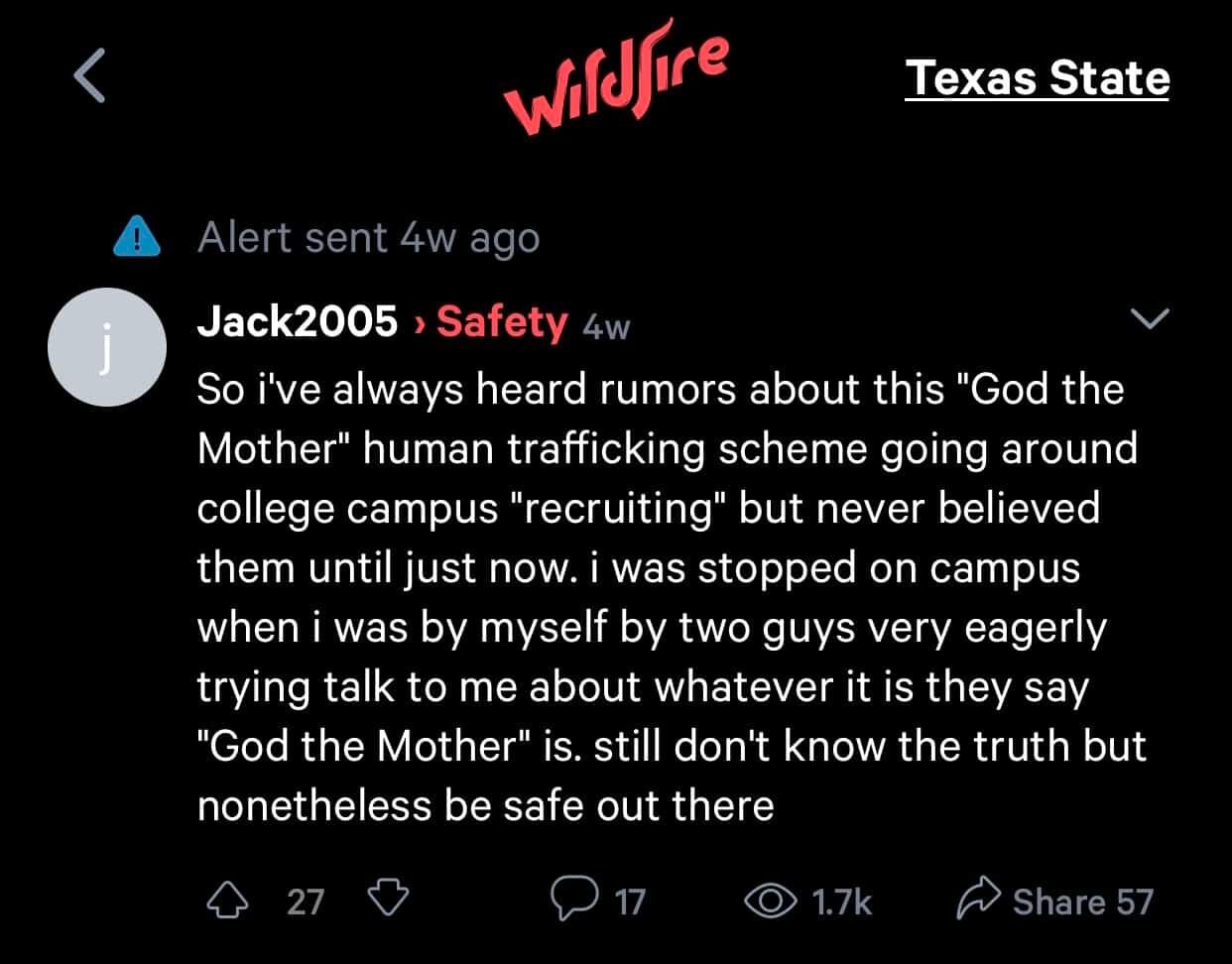 Texas State students reported being approached on campus by World Mission Society Church of God members, informally known as “God the Mother,” amid baseless rumors the group is a front for a sex trafficking ring.

The nationwide claims of sex trafficking by WMS are unfounded and appear to have circulated solely in online social media posts—not by law enforcement or any governing authority.

The claims originated nearly two years ago on social media and have been debunked, but that has not stopped allegations from circulating on college campuses nationwide.

“Recently, we were made aware of a social media post in which someone appears to accuse the church and its members of being linked to a ring of sex/human trafficking,” WMS’s statement read. “Nothing could be further from the truth. We are a church of Christian love and denounce any such activities wherever they may be carried out. This is not only unfair but has endangered innocent people who are simply trying to worship God as their conscience moves them.”

University Police Department Captain Patrick Cochran said the department has performed extensive background checks on the organization using the Austin Regional Intelligence Center. The database is recognized by the Department of Homeland Security and consists of 17 public safety agencies in Hays, Travis and Williamson counties with aims of combating crime and terrorism.

“We did a whole work-up on the group this year to make sure we were clear because you cannot really tell sometimes with social media,” Cochran said. “We went through our intelligence center, ARIC, and asked them to check this group out. So far we have yet to find anything coming close to claims of sex trafficking.”

A religious movement beginning in South Korea in 1964, WMS has been compared closely to traditional Christianity with the key difference being the belief in “God the Mother.” WMS distinguishes itself from other religious groups by emphasizing 2,500 instances of plurality in the Bible in reference to God. WMS members infer there is a God made in a female image, “God the Mother,” working in tandem with a more conventional male image of God.

The WMS website describes its objective as “carrying out missionary work and volunteer services with the goal of preaching the good news of salvation and happiness to all people.”

The organization has received accolades for its charitable work. WMS was awarded The Queen’s Award for Voluntary Service in 2016, the highest award given to local volunteer groups across the U.K. to recognize outstanding work done in their own communities.

According to its website, WMS has 3 million members in 175 countries and about 7,500 churches throughout the world.

Why are they here?

WMS has brick-and-mortar churches in San Antonio, Austin and Houston. Given Texas States’ close proximity to these locations, members travel to campus to proselytize and recruit.

According to Captain Cochran, WMS typically appears on campus during fall semesters. He believes the organization does this to recruit students at the university.

What are they doing?

Students have reported being approached by WMS members on campus at night, typically as a pair dressed in nice clothing.

Madison Campbell, exercise and sports science freshman, said she was approached at the UAC arch while walking home from a meeting on campus.

“I think it was 8:30 or 9 p.m. when (the WMS member) talked to me,” Campbell said. “She pulled out her phone and started talking about ‘God the Mother.’ She asked me questions like ‘have you heard of this’ and ‘what are your thoughts on that’ and I didn’t know what to think—I just wanted to go home because it was late.”

Campbell said she did not give her real name to the member when asked.

“She was very smiley and friendly but I did not give her my real name because I felt really uncomfortable,” Campbell said. “I kept thinking, ‘I’m in college and this is a chance to experience something new.’ At the same time, mentally, I was thinking ‘hey, this doesn’t feel right. I don’t want to be here right now.'”

After returning to her dorm and attending class the next day, Campbell described a second encounter with the group and said she started to see posts on social media about WMS.

“I saw rumors pop up on social media and the Wildfire app,” Campbell said. “I was getting lunch the next day and a woman came up to me saying she did not want to scare me but there are these people talking about ‘God the Mother’ and suggested I go inside. I thought, ‘wow, at least it is not just me'”

Campbell said the couple was nicely dressed and the man looked middle-aged. They approached students and talked to them for about five minutes before leaving.

The Wildfire app is a crowd-sourced application delivering safety notifications when emergency situations occur near the user. “God the Mother” is discussed frequently on the app, with users warning others about the groups’ presence on campus.

One user posted on Wildfire Sept. 17, stating, “I’ve always heard rumors about this ‘God the Mother’ human trafficking scheme going around college campuses ‘recruiting,’ but never believed them until now.” The user then said how they had been stopped by two members of WMS. The post concluded with, “don’t know the truth, but nonetheless, be safe out there.”

Is WMS allowed on campus?

According to UPD records acquired by The University Star, peace officers have made contact with WMS members on several occasions. The officers ensured the WMS members they are allowed to be on campus but reminded the group they are restricted from entering university facilities.

Duncan-Ashley said Texas State’s status as a public institution allows the majority of groups to form a student organization contingent on the fulfillment of certain requirements.

“We are a public institution, so as long as organizations reach the minimum requirements they can be considered a registered organization at Texas State,” Duncan-Ashley said. “Groups must have an adviser, three individuals—essentially three officers—that can speak on behalf of the organization, a constitution and must attend risk management training.”

What can you do if you do not feel safe on campus?

Texas State Faculty Senate discussed faculty and staff morale along with the complexities of its Personnel Committee during its April 21 meeting.

The Texas State football team returned to spring practice on April 22 after canceling for 16 days.