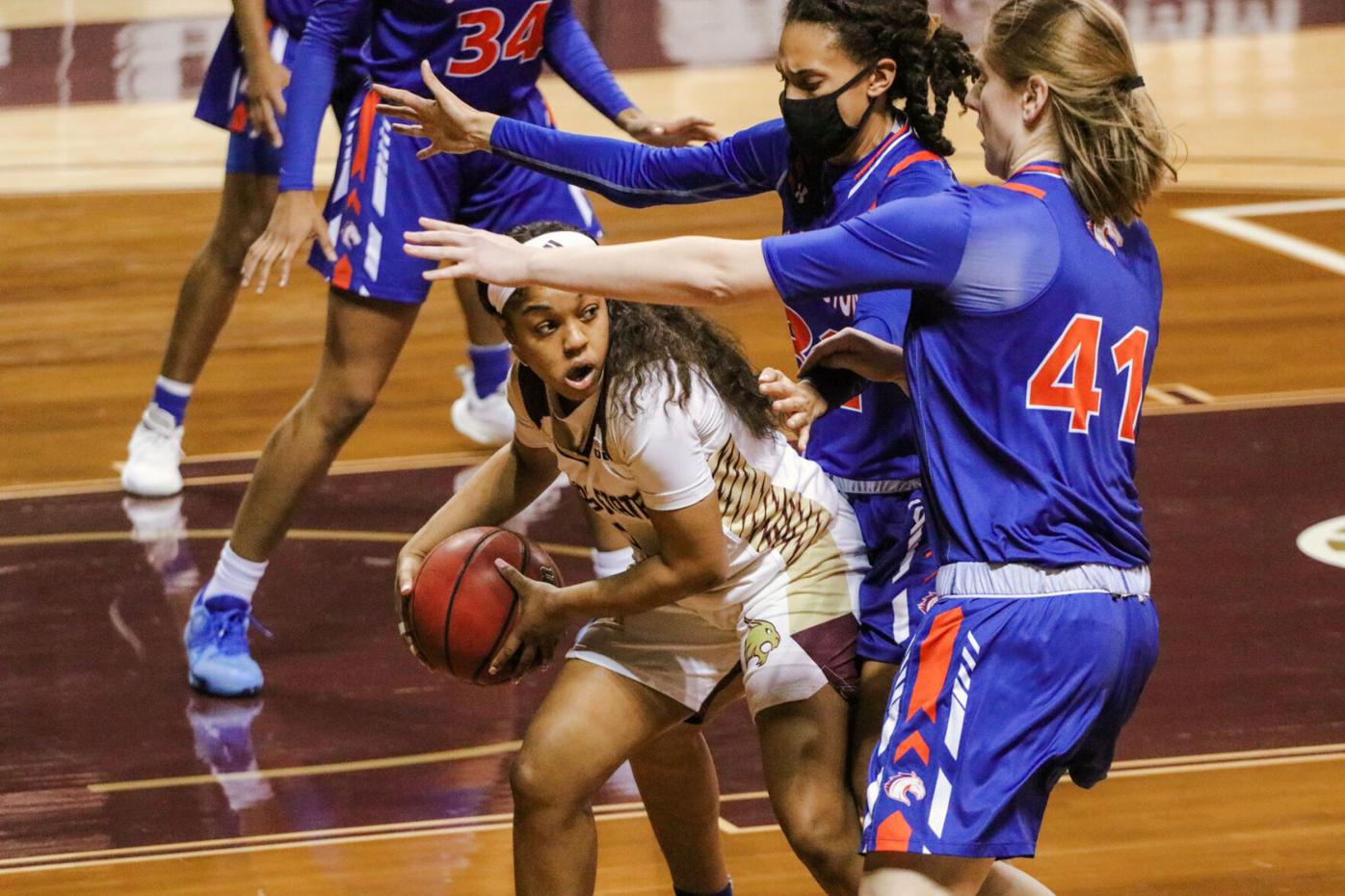 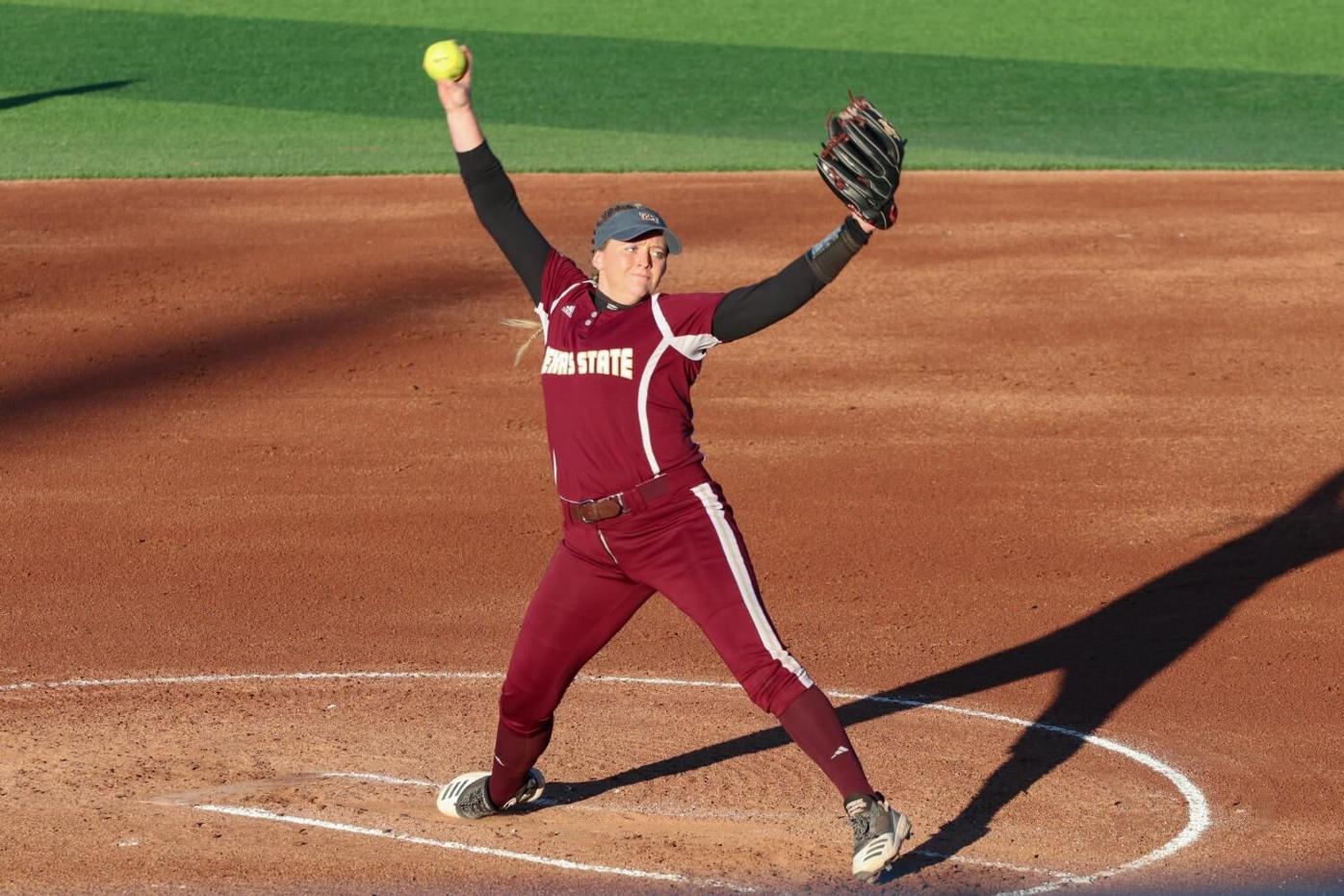 Texas State freshman pitcher Tori McCann winds up to pitch to a Saint Louis batter during the first inning of a game, Friday, Feb. 14, 2020, at Bobcat Softball Stadium.

Of the total number of athletes recognized, 102 were named to the Sun Belt's Commissioner's List for earning a GPA of 3.5 or higher during the year. The remaining 83, who had a GPA between 3.00 and 3.49, were named to the conference's Academic Honor Roll.

The number of student-athletes selected for this year’s honor roll tops last year by over 50 new athletes.

“Texas State is tremendously proud of all 185 Bobcat student-athletes who were recognized by the Sun Belt Conference during the 2020-2021 academic year,” Director of Athletics Don Coryell said in a statement. “I believe the success obtained by each student-athlete is a great testament to our academic services as well as our academic standard set by each head coach.”

McCann is aware of the misconceptions people may have about student-athletes and their ability to be successful in both their academic and athletic careers.

“Some of the misconceptions about student-athletes are that they have it easier than other students so they can focus on their sport, but we are required to put our academics before our sport,” McCann said.

All 12 returning players of Texas State's Women's Basketball team also earned a Sun Belt Academic Honor. Head Coach Zenarae Antoine said getting recognized for academic success is an important achievement and it's important for the team to support its athletes both on and off the court.

“The quality of our student-athletes starts with the women on our team and their families," Antoine said in a statement. "We make sure that, as a coaching staff, we celebrate all of their successes in the classroom, on the court and everything in between.”

Senior guard Kennedy Taylor, who has a year of athletic eligibility left, graduated in the summer of 2021 with a degree in mass communication. The stress of being an athlete while also managing school was initially challenging for her as a freshman. However, she said she soon learned how to prioritize both time on the court and in the classroom.

“It has definitely gotten easier," Taylor said. "When I first came in as a freshman everything was fast paced. I didn’t really know how to manage my time, but as I have gotten older I have learned a system. I am a student first and an athlete second. I try to get everything done before I go out on the court.”

Taylor said her parents are a huge part of her success off the court as they made it clear that there are no excuses when it comes to academics.

“It has been instilled in me ever since I was a kid that everything you do, you do with 1000% effort,” Taylor said. “Just because I came to college and the work is more rigorous, doesn’t mean I can use that as an excuse to not excel at the best of my ability.”

The conference honor is important to Taylor because it represents how her hard work in the classroom has paid off.

“It means a lot; it kind of goes to show you how hard work does pay off if you put the work in and I’m glad to see the Sun Belt recognizing academic accolades and not just athletics," Taylor said. "I feel like I have set the bar high for myself anything less than that is kind of letting myself down.”