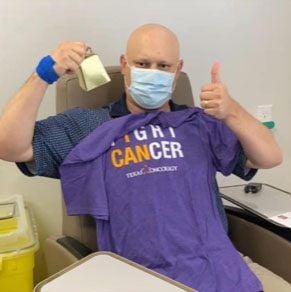 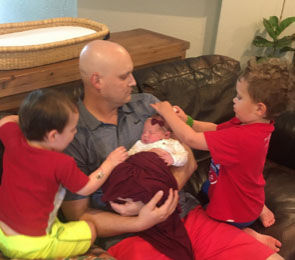 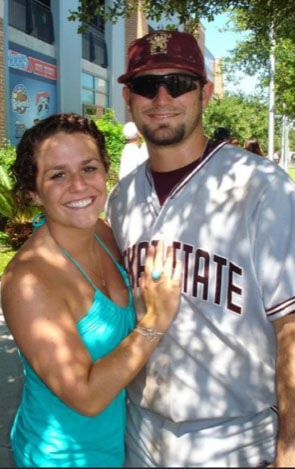 In early 2020, Kyle Livingstone sat in a hospital room thinking about how he had just been diagnosed with cancer.

“There was a mass underneath my right armpit the weekend of the alumni game, and it just kept getting bigger,” said Livingstone, a 2009 Texas State baseball alumnus. “Once they took the mass out they realized that it was lymphoma.”

He knew about the toll cancer often takes on people’s lives. Some battle distress, anxiety or depression. Some don’t live for much longer after their diagnosis.

At that point, he became determined to overcome the new obstacle in his life. He adopted a simple motto to help push him through: ‘Control what you can control.’

Now, Livingstone is cancer-free, reflecting on his difficult but successful journey to recovery. He says the lessons he learned from baseball Head Coach Steven Trout and everyone he encountered during his time at Texas State helped give him the strength and courage he needed to push himself during treatment.

“The culture of our team was amazing,” Livingstone said. “Everyone wanted to win, and everyone knew what effort was required to get where they needed to be. I always tried to stay positive and keep others around me engaged, so now I take the same energy and put it into chemo.”

One of Livingstone’s main priorities throughout his battle was to make sure no one around him saw him struggling or having a bad day. Controlling what he could control, he went through several rounds of chemotherapy with a positive attitude.

As Livingstone battled lymphoma, the world began its ongoing battle against COVID-19. Even more frightening, his chemotherapy treatment weakened his immune system making him more susceptible to infections. Doctors were worried he would contract COVID-19, but Livingstone says it actually helped him.

“COVID made it easier because nobody was doing anything, and that made it more feasible to sit at home and not have to interact with people,” Livingstone said. “Because people were so supportive of each other because of the COVID, it made me feel better.”

Livingstone says his battle brought to light just how big of a support system he has. A GoFundMe was soon started by his former teammates, Tyler Sibley and Laurn Randles, in hopes of raising money for Livingstone and his family.

“I called [Sibley and found out] they had been in partnership with the university and Coach Trout and set a goal of raising $10,000, but a goal of $22,000 was raised,” Livingstone said. “It was amazing. It broke me down and brought me to tears to see how many people care about me. The Texas State community has meant so much to me because they have shown me what it means to care for one of your own no matter what.”

Sibley says he felt compelled to help his former teammate and wanted him to know he was not alone.

“When you hear of such devastating news to one of your family members, you immediately look for ways to help,” Sibley said. “We wanted to make sure [Livingstone] had no financial barriers to receiving the best possible care there is for lymphoma. It’s just one less thing for him to worry about.”

Sibley says Livingstone’s battle with Lymphoma made him view life differently. In a world where obstacles present themselves on a day-to-day basis, he says watching Livingstone get through the toughest of circumstances and make the best of his situation helped him.

“It really made me think about my own health and has made me appreciate the little things so much,” Sibley said. “Seeing [Livingstone] be so positive throughout his battle with Lymphoma has given me a more peaceful perspective on life.”

It was Livingstone’s presence as a teammate that distinguished him from others during his time at Texas State. Trout says his team-first mentality often helped the team during games.

“Kyle truly was an amazing teammate,” Trout said. “He was always the first man there to congratulate his fellow teammates, and he always maintained a positive attitude.”

Trout says he believed Livingstone was capable of beating Lymphoma from the moment he heard the news.

“If there’s anyone I know in my life that would overcome such a challenge, it’d be Kyle,” Trout said. “Kyle’s positive energy vibrated off himself and onto his teammates, so I know he won’t allow himself to get down during these trying times.”

Livingstone says he is elated to be done with his battle against cancer and is ready to see what else life has in store for him.

“I am feeling great,” Livingstone said. “I am enjoying the last few weeks of paternity leave, and I am starting to ramp up my workout intensity. I am ready for the next phase of my life.”

Bobcats ease past Crusaders in first game of the season

Texas State men's basketball cruised to a comfortable 98-59 home win in its opening game of the 2020-21 season against the University of Mary Hardin-Baylor on Nov. 25.