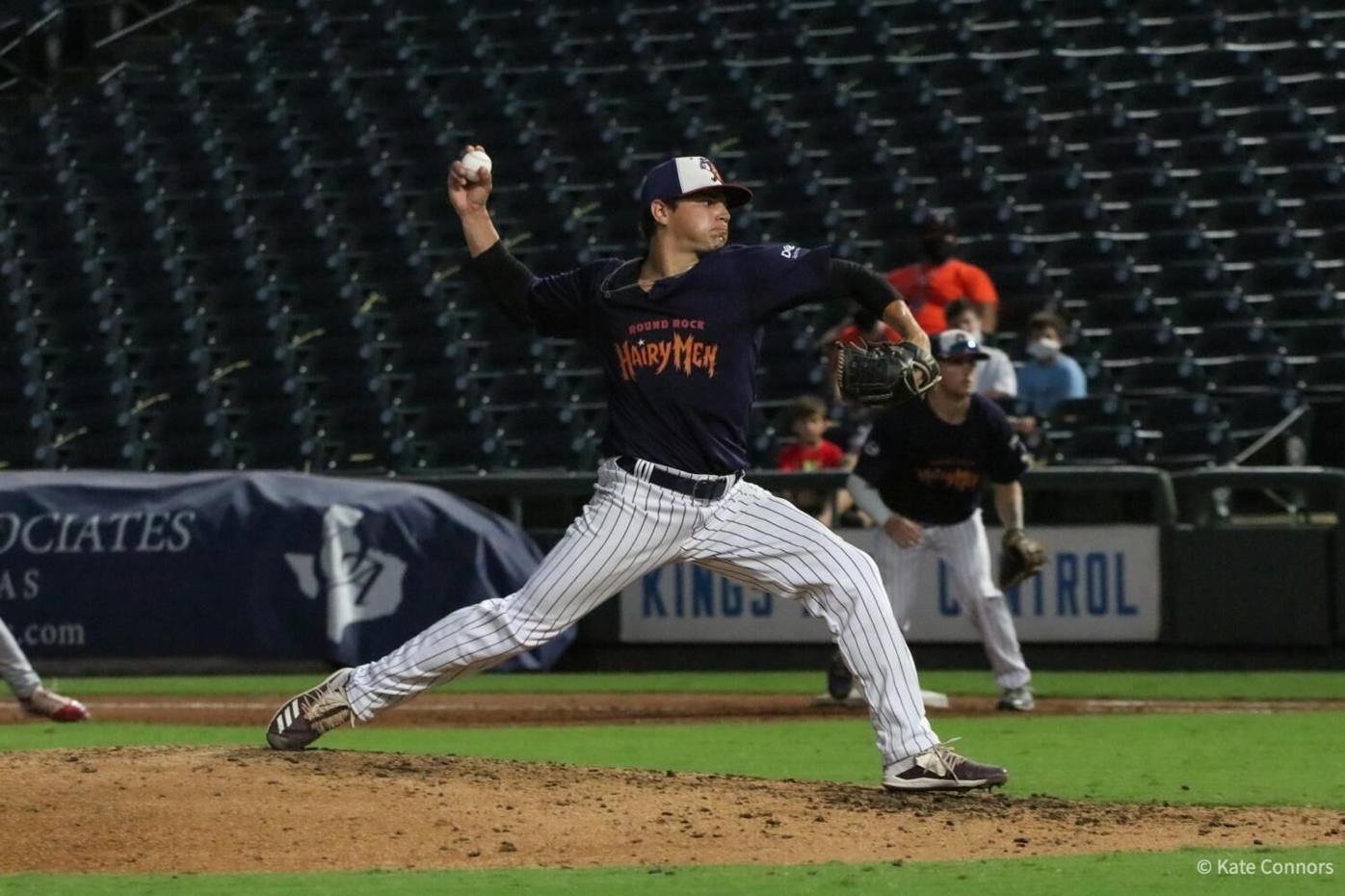 Texas State senior Jacob Little pitches to a player at-bat for the Acadiana Cane Cutters, Wednesday, July 15, 2020, at the Dell Diamond in Austin. 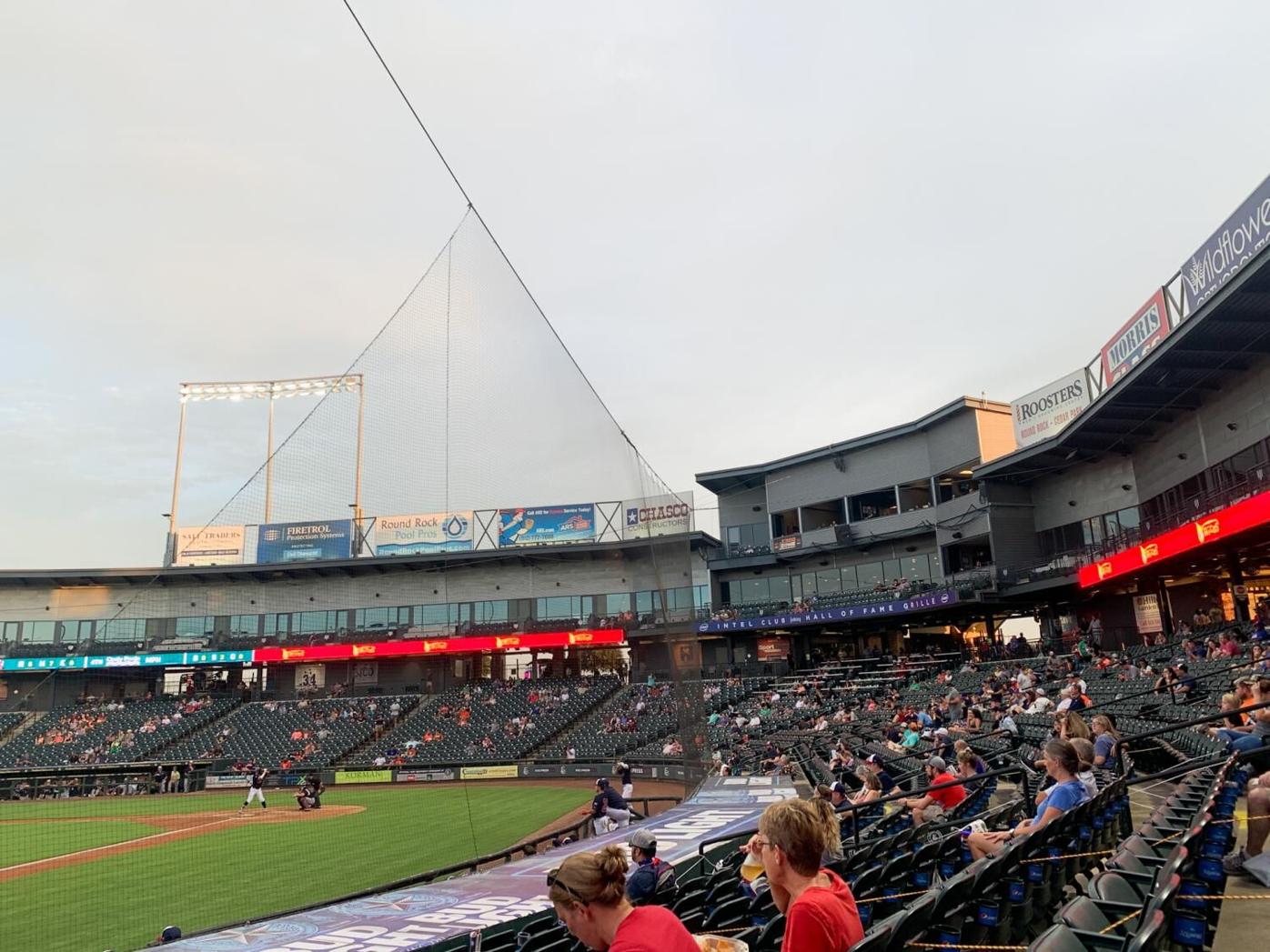 Crowds at the Dell Diamond are socially distanced with certain rows marked off to keep the stadium below 25 percent capacity, Wednesday, July 29, 2020, in Austin. Fans are required to wear masks when walking around the stadium and not in their seats. (Kate Connors)

Itching to get back to action after a promising season cut short by the COVID-19 pandemic, many Texas State baseball players have chosen to play summer ball to stay in shape for the upcoming school year.

Bobcat pitchers Wes Engle, Jacob Little and Otto Wofford joined the Round Rock Hairy Men at the Dell Diamond in Austin along with other collegiate players from universities like Baylor University and the University of Oklahoma.

The Hairy Men is a temporary expansion team of the Texas Collegiate League for the 2020 season. The TCL is a wood bat league providing collegiate baseball players with professional ambitions the opportunity to showcase their abilities while still maintaining eligibility.

Hairy Men Head Coach Chase Almendarez says the summer leagues are especially beneficial this year since the players have had an extended amount of time without playing.

“With their season being shut down in mid-March, this has served as an opportunity for them to work on their skill sets going into the fall,” Almendarez said. “All of these guys want to move onto the next level and play pro-ball. The schedule we are playing on top of the travel required mimics a professional summer and gives them a taste of what it takes to play at the next level.”

With 30 scheduled games in July and August, Bobcat players are getting the chance to practice while learning from other coaches and players outside of Texas State. When offered the chance to play at the Dell Diamond, Little, a redshirt senior pitcher, says he figured it would be an awesome place to call a home-field having grown up in the area.

“The guys, coaches and upper-level people really know what they are doing,” Little said. “The talent on the team is unreal, and it’s fun because, for the Bobcats, we play against most of them. A lot of them are from the area as well and have a little more pride when playing in front of basically a home crowd.”

Joining the Hairy Men has given the players consistent gameplay but also a workout schedule that keeps them in shape.

“For workouts, we do kinda basic baseball stuff, they treat us in a way like pro guys, of course, regular throwing workouts and all other opportunities to succeed on the field,” Little said. “I’m constantly working out and staying in the best shape I can be to stay healthy. Our coaches at [Texas State] have done a great job making sure we have all the information and knowledge for that.”

The short season means games and workouts are planned in close proximity; however, the quick turn around time has allowed the players to grow as athletes.

“Because we are playing almost every day with the exception of Monday, our workout schedule takes place four-to-five hours before each game,” Almendarez said. “This schedule differs from a collegiate schedule to where we don’t have certain days where we can strictly practice. We have to practice on game-days and will usually follow the same routine—30-45 minutes of fieldwork and then we will take batting practice right after for about an hour.”

While the game can still be played, that has not stopped the league and venue from following COVID-19 precautions. Masks are required in the Dell Diamond which is operating at 25% capacity. Many seats have been roped off and limited tickets are available.

“It has definitely been different playing in the middle of a pandemic from limited fans, wearing masks around the complex—and when we travel—and just trying to maintain the social distancing aspect as well,” said Wofford, a sophomore pitcher. “I’m just glad we’re getting to get out on the field and play again.”

Looking ahead to Texas State’s spring collegiate season, it remains unclear what the games will look like from a logistical standpoint. The team found success during the first part of last season’s schedule, with a 14-4 record before the season was suspended.

Many senior players have decided to take advantage of the extra year of eligibility and play another year with the Bobcats, allowing both old and new talent to come together and build a potentially strong team.

“I think we were all excited about the 2020 season and with how well we were playing, but I think this 2021 season can be very special with the majority of the team coming back and with some of the guys we have coming in,” Wofford said. “I know we’re all ready to put the maroon and gold back on and all play together again whenever that may be.”