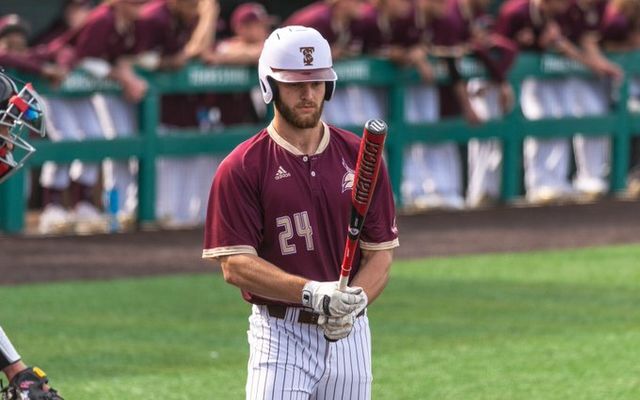 Editor’s Note: Over the next two weeks, The University Star’s sports staff will break down its Top 10 moments in Texas State sports from this past school year.

It is not often that a program like Baylor loses based on the run-rule. But on March 3, that is exactly what happened as the Bobcats routed the Baylor Bears 12-2 in just eight innings behind a stellar performance from freshman pitcher Tony Robbie.

In his first career start, Robbie pitched six innings and conceded only four hits. Robbie sealed the game by retiring the final 11 Baylor batters he pitched against. The relief pitchers, junior Tristan Stivors and freshman Otto Wofford, each pitched a perfect inning to compliment Robbie.

In what turned out to be a statement win for Texas State, the team started off a little slow but quickly gained an advantage. The Bobcats fell 0-2 in the first three innings but eventually took control of the game. In the fourth inning, Texas State scored four runs to take a 4-2 lead and never conceded another point to Baylor.

This strong inning was followed by a one-run fifth inning and another stellar four-run sixth to take a 9-2 lead. The sixth inning was capped off by a three-run homer by junior infielder Wesley Faison, who went 4-5 at-bat including two home runs in the game.

At this point in the game, it was clear the Bobcats were in control. Junior outfielder John Wuthrich scored a two-run homer in the seventh followed by another home run by Faison in the eighth to end the game.

Following the win, Texas State’s record sat at 9-4. After, the team went on to win five straight games over the next week for a 14-4 record. The Bobcats seemed poised to have an impressive season and make a deep run in post-season play.