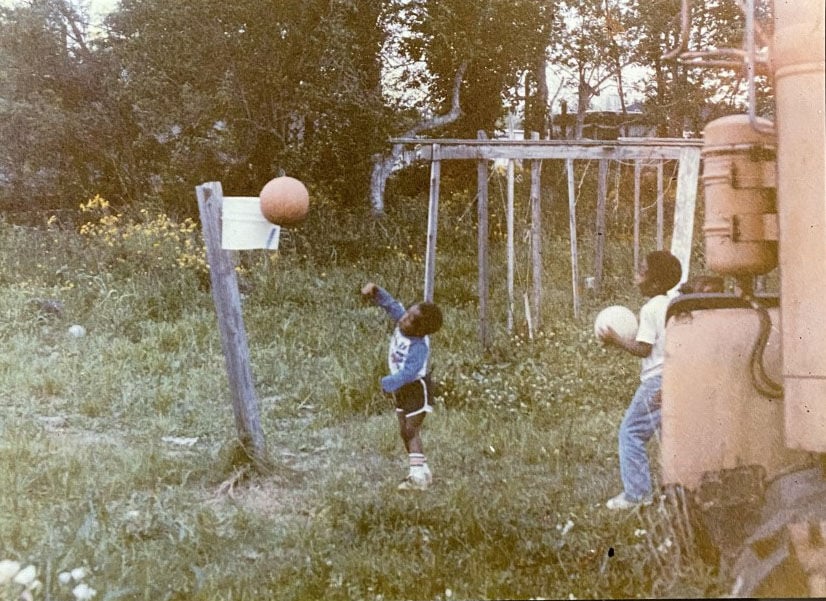 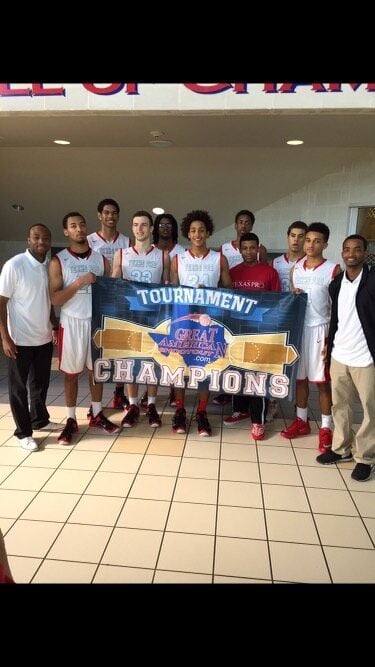 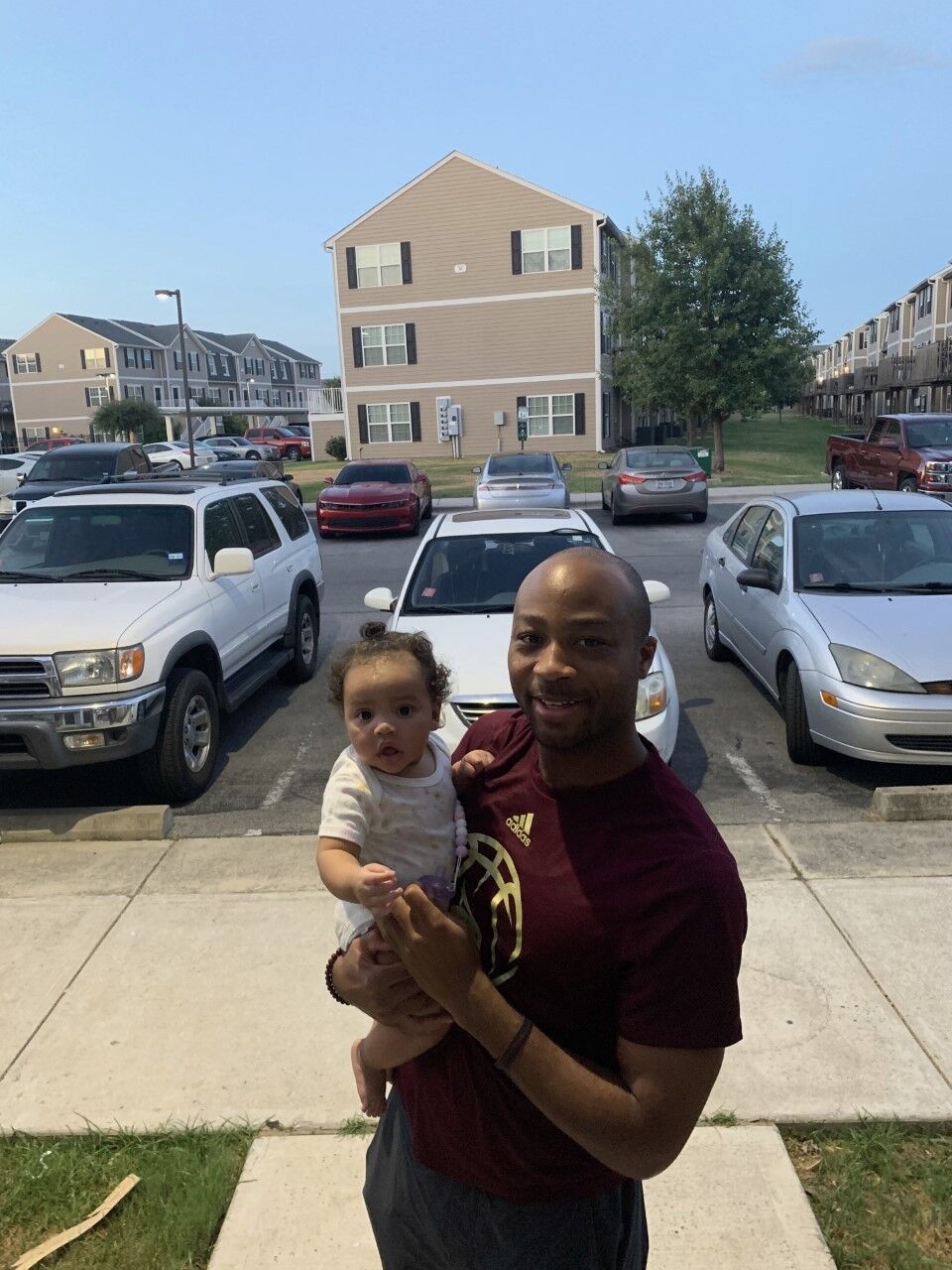 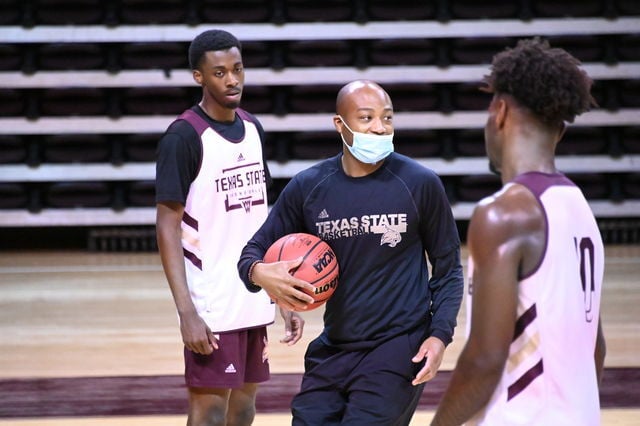 Terrence “TJ” Johnson’s path to Texas State was quite the journey — a road full of twists and enough turns that if he had made the wrong one, his life could have effortlessly turned out different.

“Full circle, that’s the story of my life,” Terrence Johnson says. “That’s how it happens.”

By making the right decisions and developing relationships with the right people, as he describes it, he found a way to control his own narrative. Fast forward years later, Terrence Johnson is now the interim head coach of Texas State men's basketball team during a time of racial unrest and a global health crisis — a challenge he was prepared for by the values instilled in him growing up.

It started with family. Terrence Johnson grew up engulfed in the southern culture of Sebastopol, Louisiana, with his sister, six brothers and family members who were always a short distance away.

“Family is very special because you don’t choose it, it’s been chosen for you,” Terrence Johnson says. “There’s something to be said about that. If you don’t trust the family that you’ve been born into, who do you trust?”

His outlook on life was shaped by family, especially his father, Wilfred Johnson, who he describes as "a pretty dominant figure."

He got his first taste of coaching when, as a child, Wilfred Johnson would take him to practice at St. Bernard, where the players nicknamed him “Lil Coach,” foreshadowing his future.

When Terrence Johnson played basketball in high school, he was a “coach on the court,” he describes. It was less about his own success and more about organizing the offense and getting his teammates involved.

Terrence Johnson enrolled at Southern University in 1996 thinking he would play as a Jaguar for the legendary Ben Jobe. But upon arrival, adversity hit as Jobe retired the summer before Terrence Johnson arrived. He was not given a spot on the roster and was instead put on an intramural team of Jaguar-hopefuls.

“This might be a sign that this is over,” Terrence Johnson says. “I just accepted my fate as such and did not play. Not only did I not play [in intramurals], I really stopped playing the game quite a bit… I just moved away from [basketball] and started focusing on academics and enjoying college life.”

Terrence Johnson graduated from Southern in 2001 with a degree in microbiology and intentions of becoming a dentist. After struggling with certain aspects of dentistry, he earned a job at St. Bernard High School, the same school his father worked at years prior, first as a teacher in 2002 then as an assistant coach in 2003.

“It was good; I really had a lot of fun,” Terrence Johnson says. “I didn’t mind walking in my father’s footsteps and people saying, ‘You’re just like your dad.’ My dad is a really good person, and he’s done some extraordinary things with his ability to influence a community at the rate he has. So I was proud of that.”

Terrence Johnson was coaching an AAU team when the devastating Hurricane Katrina hit Louisiana, briefly ending his coaching career. He then went on to work for FEMA in community relations and later demolitions.

After working for FEMA, he moved to Texas and taught middle school in Cy Fair ISD, near Houston. He then went back to school to get his master’s degree in education.

“My whole plan was to be a principal, run a prep school or an all-boys school,” Terrence Johnson says. “I had this vision of saving the world through education and mentorship.”

After a stint coaching at the AAU level, Terrence Johnson’s life once again took a dramatic turn when in 2010 he received an offer to join the coaching staff at Samford University — an opportunity he accepted.

During his time at Samford, the team played against several high-profile programs, including the Anthony Davis-led national champion, the University of Kentucky. But then his life took another turn. After two years with the Bulldogs, the coaching staff was fired by a new athletic director.

After his departure from Samford, Terrence Johnson almost went to work for former Texas State Head Coach Danny Kaspar in 2010, back when Kaspar worked at Stephen F. Austin University. He did not end up getting that job because Kaspar did not want to split Terrence Johnson and his now ex-wife, who would not move to Nacogdoches due to the history of racism in East Texas.

After having his first collegiate coaching job pulled from under him, he once again returned to work in Cy Fair ISD. Terrence Johnson then got a job at the affluent school of St. Anthony’s, coaching the sixth-grade team.

He was told the older kids were 'alright' but the sixth-graders 'couldn’t play no ball.' Terrence Johnson was able to change that narrative and win a championship, helping him out of his depression.

“He’s a thinker; he’s very passionate about the things that he does,” Pearson says. “He takes the game of basketball very serious… you can tell he’s been through some things and overcame those things. He’s the type of guy that you would want to be around and learn from no matter your career path.”

Terrence Johnson’s Texas PRO team witnessed major success and, as a result, Kaspar once again contacted him about a job, this time at Texas State. Kaspar interviewed him for the director of basketball operations position but decided not to hire him because he saw Terrence Johnson as more of a coach.

When a position opened up on Kaspar’s coaching staff a year later, Terrence Johnson was already the frontrunner for the position and was hired.

Once on the Texas State staff, Terrence Johnson was crucial to the development of Pearson due to their history, especially early on in Pearson’s collegiate career. Terrence Johnson has seen Pearson grow a lot over the course of their relationship, both as a person and a player — something Pearson appreciates to this day.

“Through all of that, I thought he would be one of the best candidates in my life to have around my daughter,” Pearson says, who brought his daughter Nova into the world his senior season. “God forbid anything ever happened to me, but if somebody could be there for my daughter and give her some words of wisdom it would be Coach TJ.”

After five years as an assistant for the Bobcats, Terrence Johnson was hit with another curveball. In the summer of 2020, Kaspar was accused of racism by former players, leading to his later resignation. Terrence Johnson was thrust into the interim head coaching role, becoming the second Black head coach in Texas State men’s basketball history.

“[I was] not necessarily prepared to take over the head coaching role,” Terrence Johnson says. “[It’s] almost as if you are expecting a baby; I think you’re preparing, but I don’t think you’re prepared. You don’t practice waking up every three hours… I liken it to that because you’re always working toward what you think preparation looks like, but you’re never really doing it until you become it.”

Relationships Terrence Johnson built in the past helped him adjust to the newfound opportunity, specifically one with current associate head coach Bennie Seltzer, who Terrence Johnson met in 2001 when he used to visit the University of Oklahoma in his college years.

"I decided to [work at Texas State] because I wanted to help TJ," Seltzer says. "It was an opportunity to help someone who I know, that I care about, that I want to see be successful in this business.”

Terrence Johnson decided to build his program on three pillars: Mental health, emotional health and physical health. The pillars took on additional importance for Terrence Johnson, knowing what his team was going through with the sudden change — a feeling his journey made him all too familiar with.

“I understand how important it is for people to feel good about themselves,” Terrence Johnson says. “You can’t hurt and heal at the same time… the hardest thing for a man to be able to deal with, especially a young Black man, is their emotional health… I want to get to the point where these guys can express themselves to me.”

“Being able to inspire and impact lives, I don’t know if there’s much that compares to that,” Terrence Johnson says. “Being given a life is a wonderful thing, but if you’re unable to impact a life with what you’re given — then what good are you?”