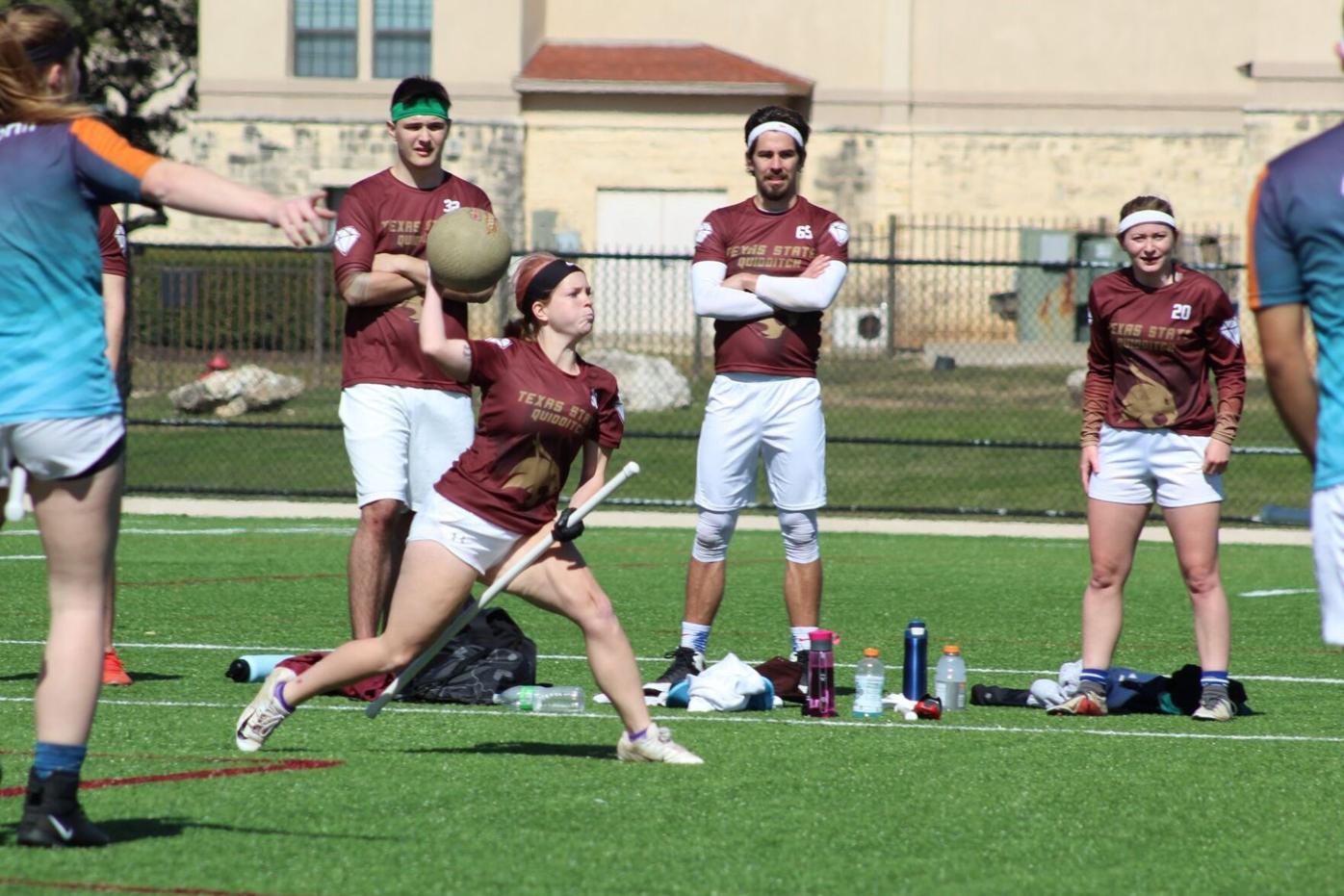 Texas State senior quidditch captain Maya Hinebaugh (30) throws a bludger in the heat of a match, Wednesday, March 6, 2019, at the University of Texas at San Antonio. 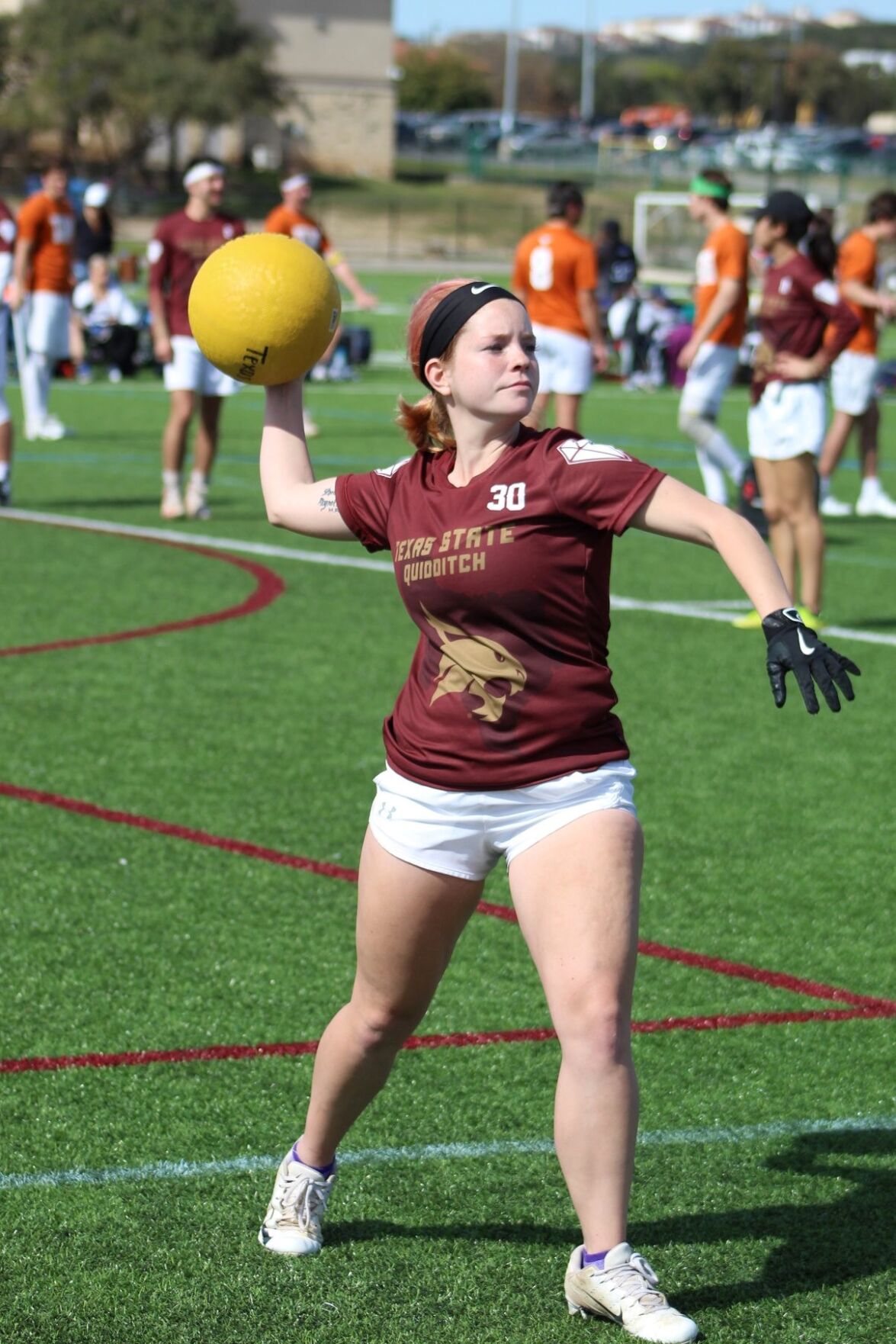 Texas State senior quidditch captain Maya Hinebaugh (30) warms up before a match, Wednesday, March 6, 2019, at the University of Texas at San Antonio. 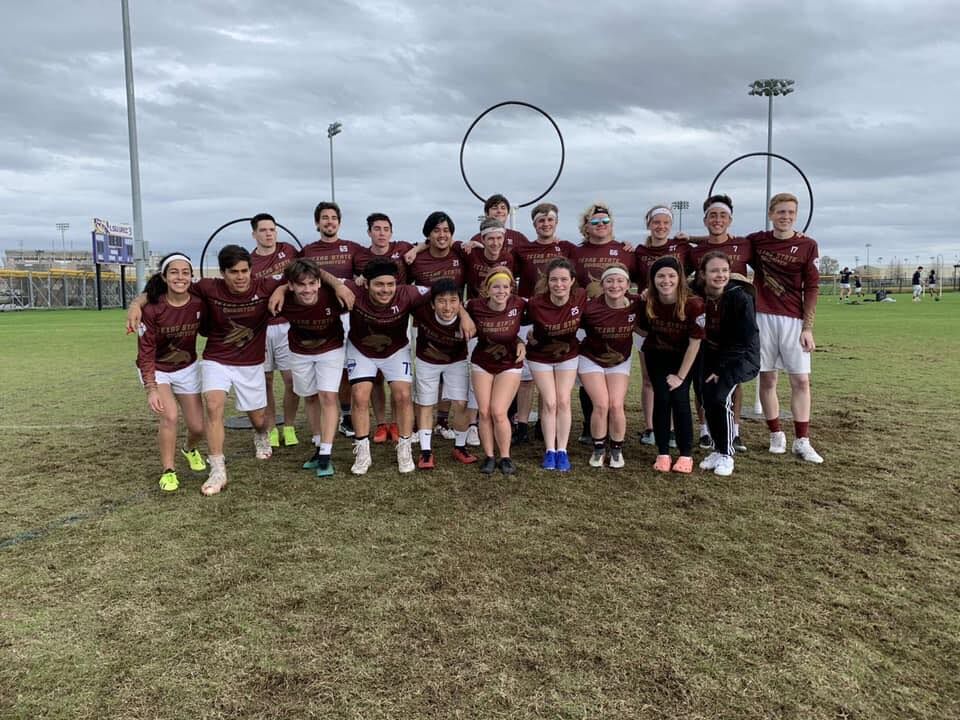 Maya Hinebaugh was elected captain of the Texas State quidditch team in April, becoming the team's first female captain in a decade. With the fall season just months away, she begins her work to rebuild the team after setbacks brought by COVID-19 and continues to drive diversity within the organization.

“I would really like to be remembered for bringing our team back, especially after COVID,” Hinebaugh, a history and communication studies senior, says. “I’d like to be remembered for keeping the organization alive and healthy. It doesn't matter right now, but in four years people are going to be like, ‘They all learned under Maya.’ That would be kind of cool. I want all of these people to learn and stay in the community… I want them to have the same experience I did.”

Hinebaugh joined the team in 2017, during her first year at Texas State after being introduced to the sport at New Student Orientation. With her childhood spent playing softball and practicing gymnastics, she looked for a way to maintain her athletic drive in college.

“I’ve always been involved with sports,” Hinebaugh says. “I wanted a more competitive and more physical outlet, so I signed up, and I tried out. [Quidditch] was way more intense and competitive than I thought. I fell in love.”

Hinebaugh describes herself as a utility player, meaning she plays multiple positions, but mainly plays as a beater, throwing “dodgeballs” at opposing players to temporarily take them out of play.

Based on the sport depicted in the Harry Potter book series and movie franchise, in quidditch, players of all genders, including nonbinary and gender non-conforming players, play on the same team, a rare occurrence in a full-contact sport. Each quidditch team is allowed a maximum of four to five players of the same gender identity on the field at one time.

Most teams, including Texas State, field the minimum requirement for two women players, but then fill the other positions with four men. According to Hinebaugh, this inequality of field time is because teams often invest less in developing the skills of their women players, and instead rely on the size of male players.

For instance, women players are usually not taught how to tackle their opponents or how to take tackling from the opposing team. When Hinebaugh first joined the team, she says she did not receive the proper training to best handle herself on the field. Now, she plans to run her team differently.

“As a woman, I want to make sure I include those learning players because I think that is so important,” Hinebaugh says. “I want to give our women players more of a chance…. A lot of quidditch teams stick the girl players at a certain position, and they only have one set role. I want to change that up… I want to make sure girl players are actually built and make sure that they are getting the same athletic teaching as male players have.”

Being a woman herself, Hinebaugh believes she is better equipped than past male captains to invest in the other women on the team, such as Tess Acosta, a recreation administration senior, who sees Hinebaugh’s leadership as the potential for change in quidditch teams nationwide.

“I think it's gonna make the females feel a lot more heard and, hopefully, we focus more on the fundamentals for females,” Acosta says. “Sometimes, you find that a lot of girls who join don’t know how to throw a ball correctly, they don’t know how to tackle. Reiterating those fundamentals is going to be huge for quidditch, not just for our organization, but all of quidditch.”

Texas State’s quidditch team is consistently one of the best in the nation, ranked No. 3 before COVID-19, competing against other top teams like the University of Texas, the No. 1 team before COVID-19.

Typically, Texas State's quidditch organization has around 300 members, however, the team is down to about 150 members after many graduated in spring 2020. Reduced recruitment classes throughout the past year due to COVID-19 regulations also contributed to the team’s downsize

To combat falling numbers and maintain Texas State’s status as a top team, Hinebaugh and Emmanuel Bustos, a pre-respiratory care junior and the newly elected quidditch president, plan to ramp up recruitment in fall 2021.

Pre-pandemic, the quidditch team was frequently seen on the Quad promoting the organization to passing students. However, Bustos feels these strategies hinder the club in the long run. Instead, Bustos and Hinebaugh seek to show interested students the benefits of joining the team, not verbally, but through their actions.

The Texas State quidditch team is a close-knit community. Its members spend time together both during organization events and outside of quidditch. Sometimes, its members even get married; Hinebaugh is attending several quidditch players’ weddings this year.

Hinebaugh says she loves quidditch for a variety of reasons, including the wealth of diversity within her community, the ability to play a sport she deeply enjoys and the team's consistent winning streaks. However, most of all she has loved the relationships she's built along the way.

“[Quidditch] has meant everything to me,” Hinebaugh says. “It’s given me the best friendships I’ve ever had. I just meet the best kind of people, and I get to play a really cool sport, and not just with women and men, with everyone. It’s really been a huge part of my college experience. It’s opened my eyes to so many different things. Quidditch has been my main source of happiness.”

Correction: An earlier version of this story incorrectly explained the gender rules of quidditch. We apologize for the errors and have since corrected them.