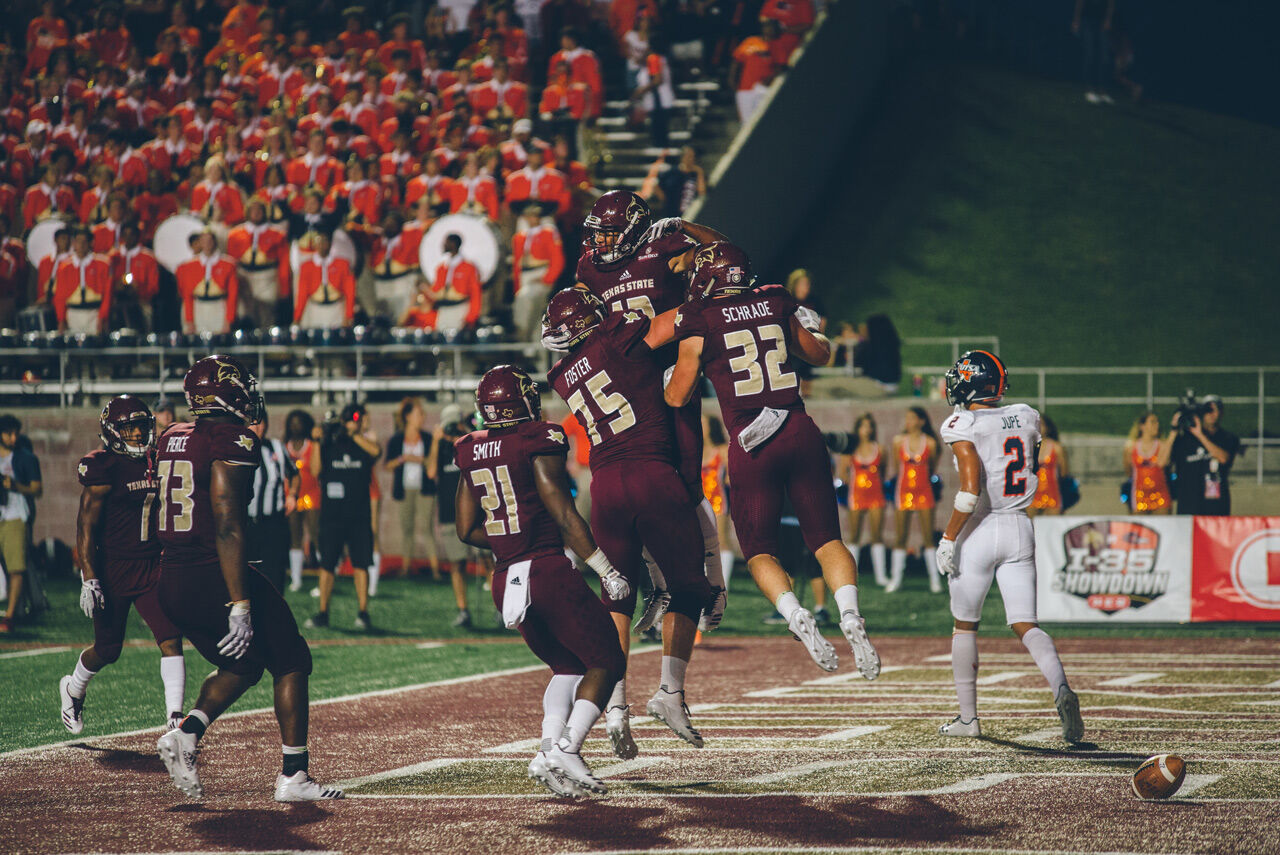 In this 2017 file photo, Texas State celebrates a touchdown in a “Battle of I-35” matchup against the University of Texas at San Antonio in Bobcat Stadium. The Bobcats lost the game 44-14. On Sept. 12, 2020, Texas State adds a new chapter to the rivalry against UTSA as the two teams face off again at the stadium. 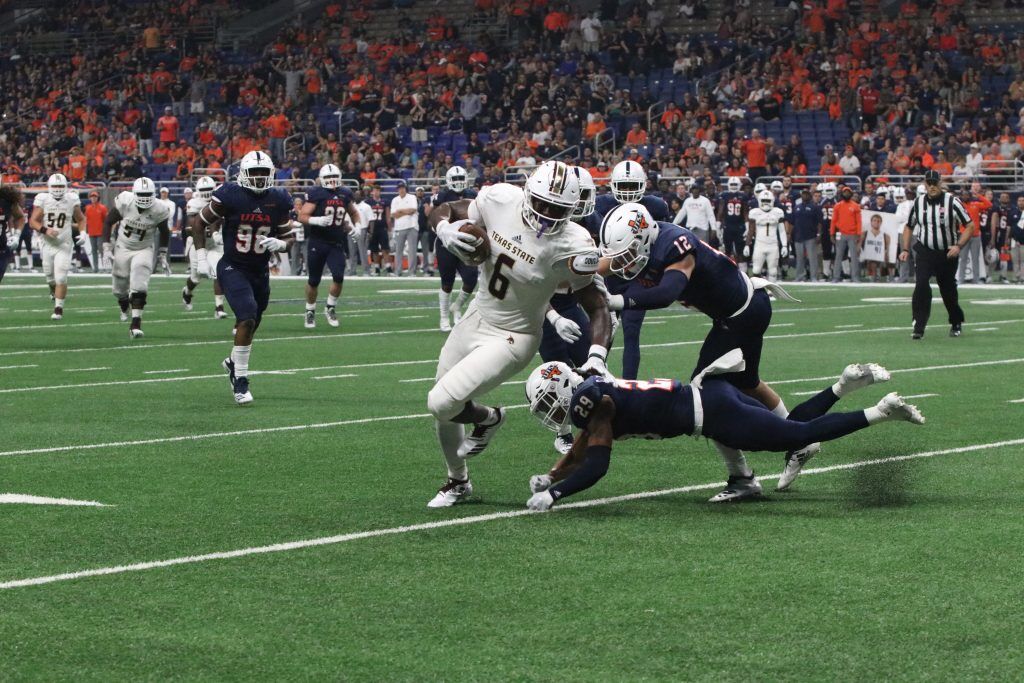 Former Texas State football player Keenen Brown pushes through UTSA defenders, Saturday, Sept. 22, 2018, at the Alamodome in San Antonio to get into the end zone.(Kate Connors) 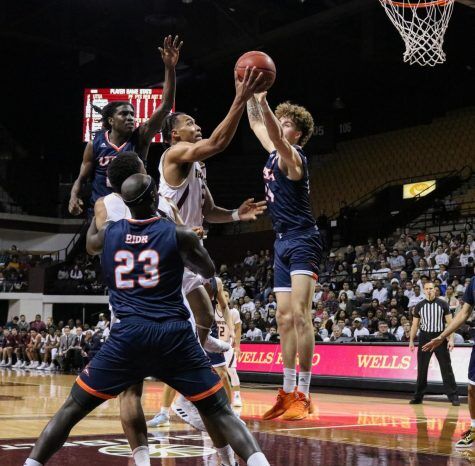 Texas State men’s basketball’s all-time leading scorer Nijal Pearson carries the ball through three UTSA defenders to score for the Bobcats during the first half of the game, Saturday, Dec. 7, 2019, at Strahan Arena. (Kate Connors) 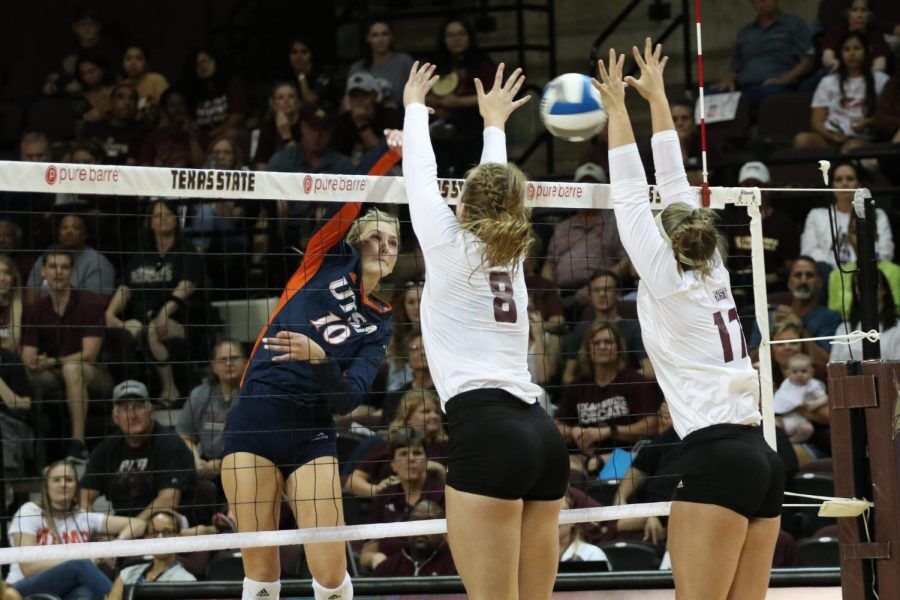 In this file photo, Jill Slaughter (8) and Emily DeWalt (17) jump in an attempt to double block a UTSA player’s hit across the net, Thursday, Sept. 19, 2019, in a game at Strahan Coliseum. (Kate Connors)

Shortly after Texas State’s game against Southern Methodist University ended, both fans of the Bobcats and the University of Texas at San Antonio Roadrunners hit their Twitter feeds to officially start “Hate Week” in preparation for their Sept. 12 matchup.

The rivalry between the Bobcats and the Roadrunners is relatively young, making the vitriol between the two fanbases surprising to the uninitiated eye.

Fun Fact – There is only ONE Texas State University, but there are FOURTEEN University of Texas schools. The one in San Antonio is barely a forgotten footnote in the vast UT school system.

“It was a little shocking that [Texas State and UTSA] have only played a three-game series.” Texas State Defensive Coordinator Zac Spavital said. “The way it has been talked about, I was expecting it to be a lot more, but I love the energy that we are trying to drive with it. I think it’s important because both programs are trying to set themselves apart.”

Separated by just 57 miles, the I-35 rivalry has been a big part of both Texas State and UTSA athletics.

“[UTSA is] just down the highway; it’s so close in proximity that I think that’s what makes the rivalry kinda elevated,” Graham said. “I think the coaches do a good job in [stressing] that while [it is] a rivalry, you need to approach this game as if it is a championship game.”

“If you go into a game where ‘Oh they are not a rival, they are this and that’, then you are not going to play to your best ability,” Graham said. “So throughout the week, Monday, even on our off day coming and getting in film, Tuesday, Wednesday are our hard workdays, you got to prepare to like you are playing the best team in the country.”

The history of the I-35 rivalry traces back to 1991 when UTSA officially joined the Southland Conference.

Since the Roadrunners did not have a football team at the time, the rivalry was focused on men’s basketball. It eventually grew out to other conference-sponsored sports.

In 2010, the rivalry between the two schools entered a new chapter when both the Bobcats and the Roadrunners announced their decisions to leave the Southland Conference and join the Western Athletic Conference (WAC), which also was sponsoring Football Bowl Subdivision football at the time. UTSA established its football program in 2011.

The first official football game happened during both schools’ inaugural season in the WAC. With 39,032 in attendance, the largest game attendance in a WAC game and for both schools during the 2012 season, the Roadrunners came out victorious with a 38-31 win during Thanksgiving weekend.

After the demise of the WAC as an FBS football conference, the two schools went their separate ways as Texas State joined the Sun Belt Conference and UTSA joined Conference USA. The rivalry’s future was in question.

In 2014, former UTSA Athletic Director Lynn Hickey and current Texas State Athletic Director Larry Teis announced the return of the I-35 football rivalry with the series returning in 2017 and 2018, then 2020-2025. The series was extended to the 2031 season with the two teams not playing during the 2021 and 2022 seasons after restructuring their non-conference schedules.

This rivalry is mutually beneficial for the two schools, drawing big crowds.

“Our first game at UTSA drew nearly 40,000 fans in 2012, and both schools realized the importance and benefits of playing one another,” Teis said.

Even Head Football Coach Jake Spavital, despite being at Texas State just two years and never facing UTSA, knows how important the game is to both communities.

“In my short time here, I’ve had more conversations with people about this game,” Spavital said. “I’ve had more conversations about the I-35 showdown than the SMU game. This game means a lot to Texas State University, and I’ve explained that to our kids. We have a brand new team, so you got to educate them on every scenario that occurs. We talked about this morning—about the importance of this game, what is means to this university. It’s going to be fun to be a part of.”

With the Bobcats losing both games in 2017 and 2018, Texas State now looks for its first victory in the I-35 series. For Graham, who played in the two games prior, this is an opportunity to do something no Bobcat team has done before.

“We respect [UTSA], but by the end of the day we know it’s a rivalry, and we want to win,” Graham said. “Everybody has their individual goals, but to me, I just want to win as a team and do something that no one has done here before.”

Texas State and UTSA will kickoff at 2:30 p.m., Sept. 12, in Bobcat Stadium. The game will air on ESPN2; it is the second week in a row Texas State will play on national television.