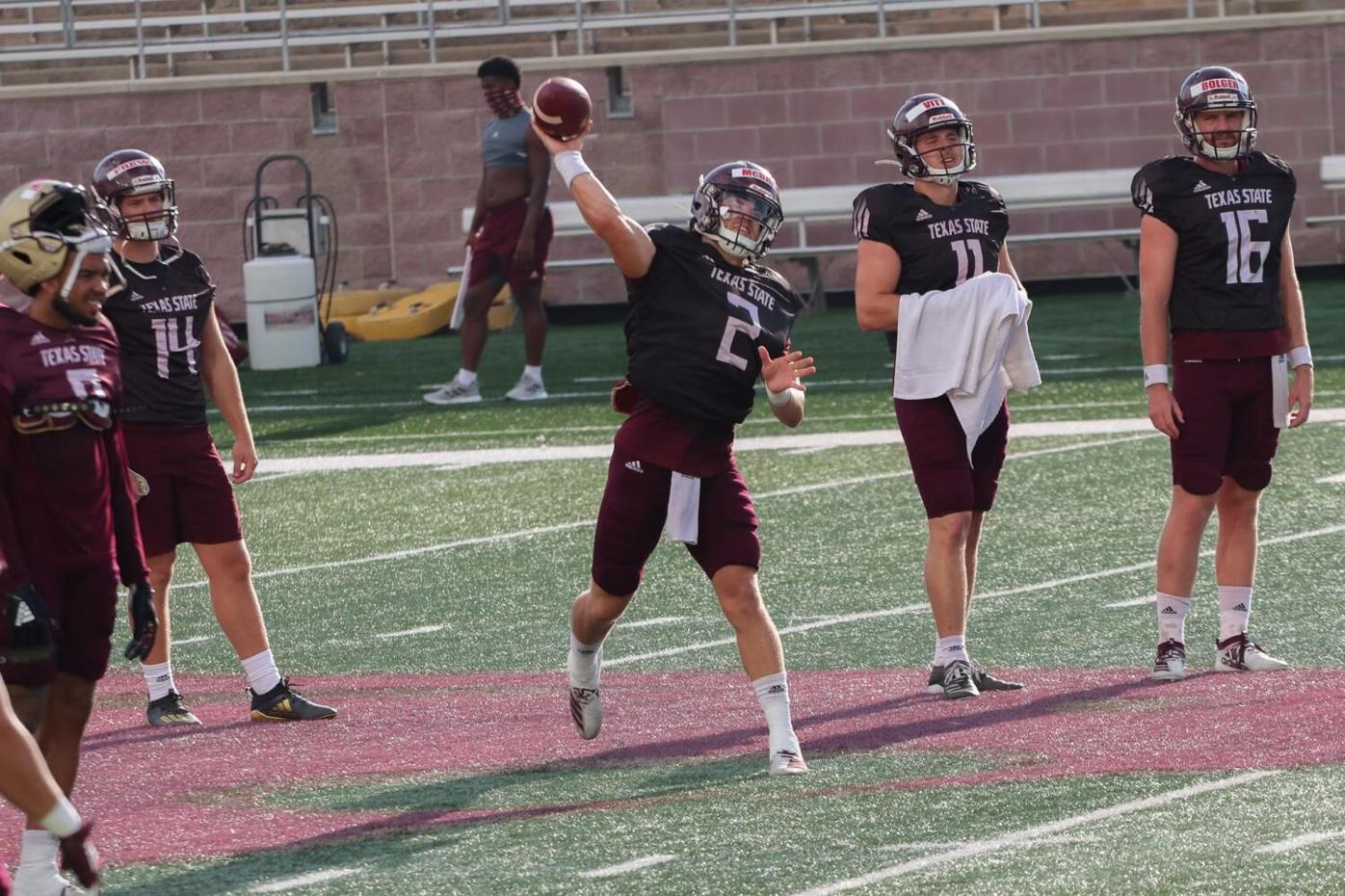 Transfer sophomore quarterback Brady McBride passes the ball to a wide receiver in a drill during the Bobcats’ fall camp, Tuesday, August 11, 2020, at Bobcat Stadium. 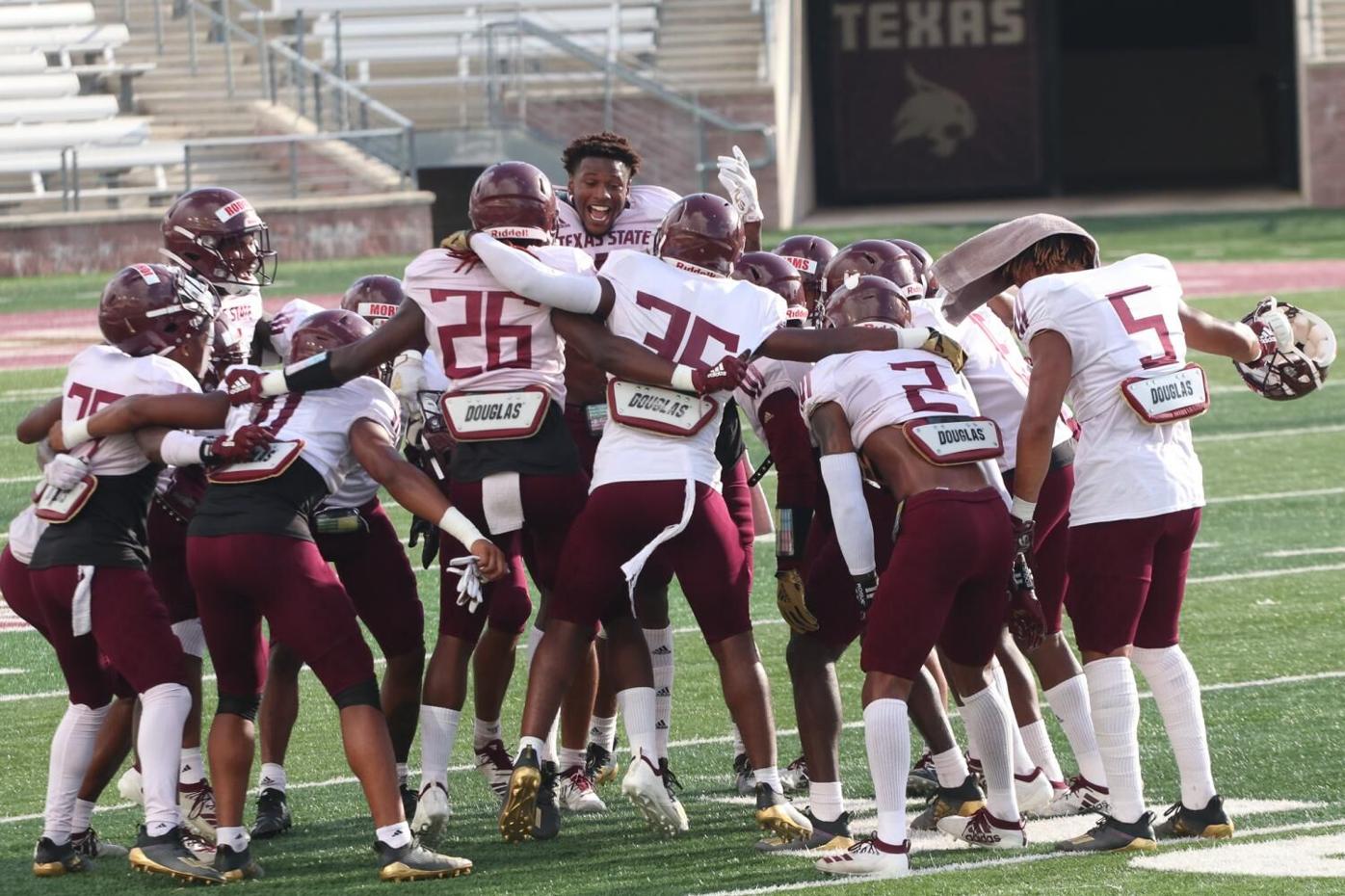 The Bobcats’ defensive players huddle together and pump one another up before moving into the next section of practice, Tuesday, Aug. 11, 2020, at Bobcat Stadium 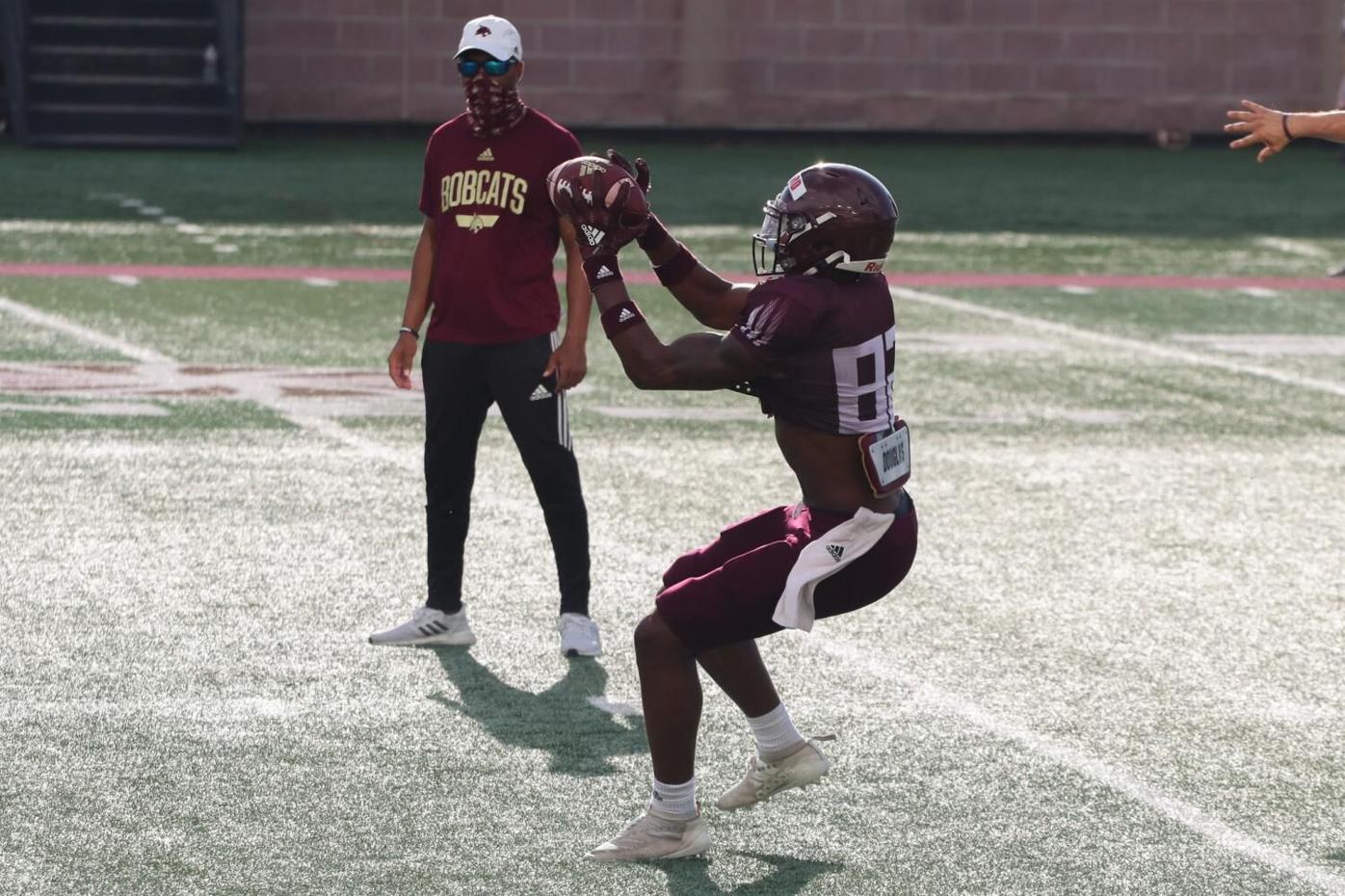 Junior tight end Kevin Howard catches the football before running down the field while in a practice drill during the Bobcats’ fall camp, Tuesday, August 11, 2020, at Bobcat Stadium 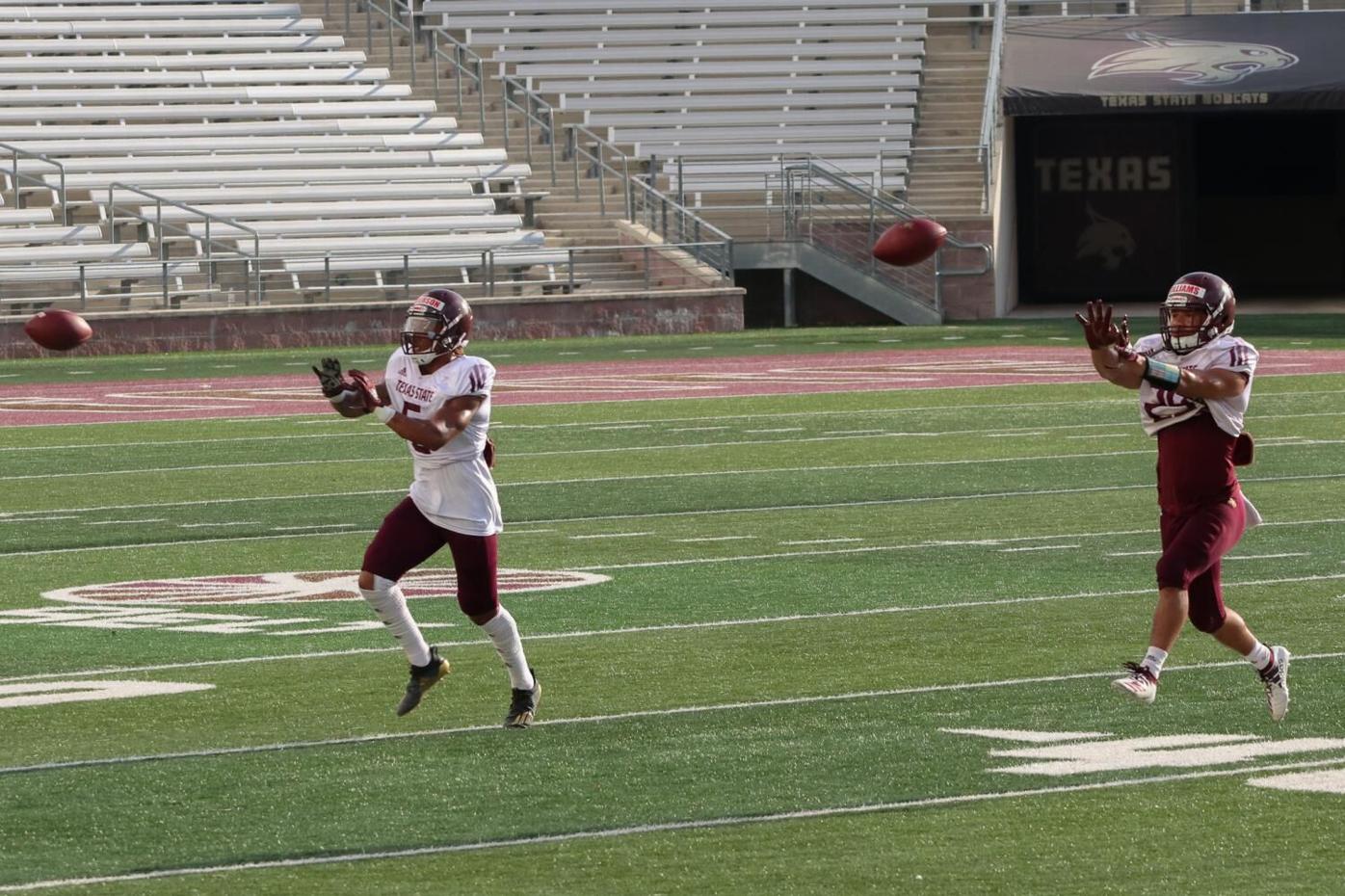 Defensive players for the Bobcats run through drills in pairs at team practice, Tuesday, August 11, 2020, at Bobcat Stadium 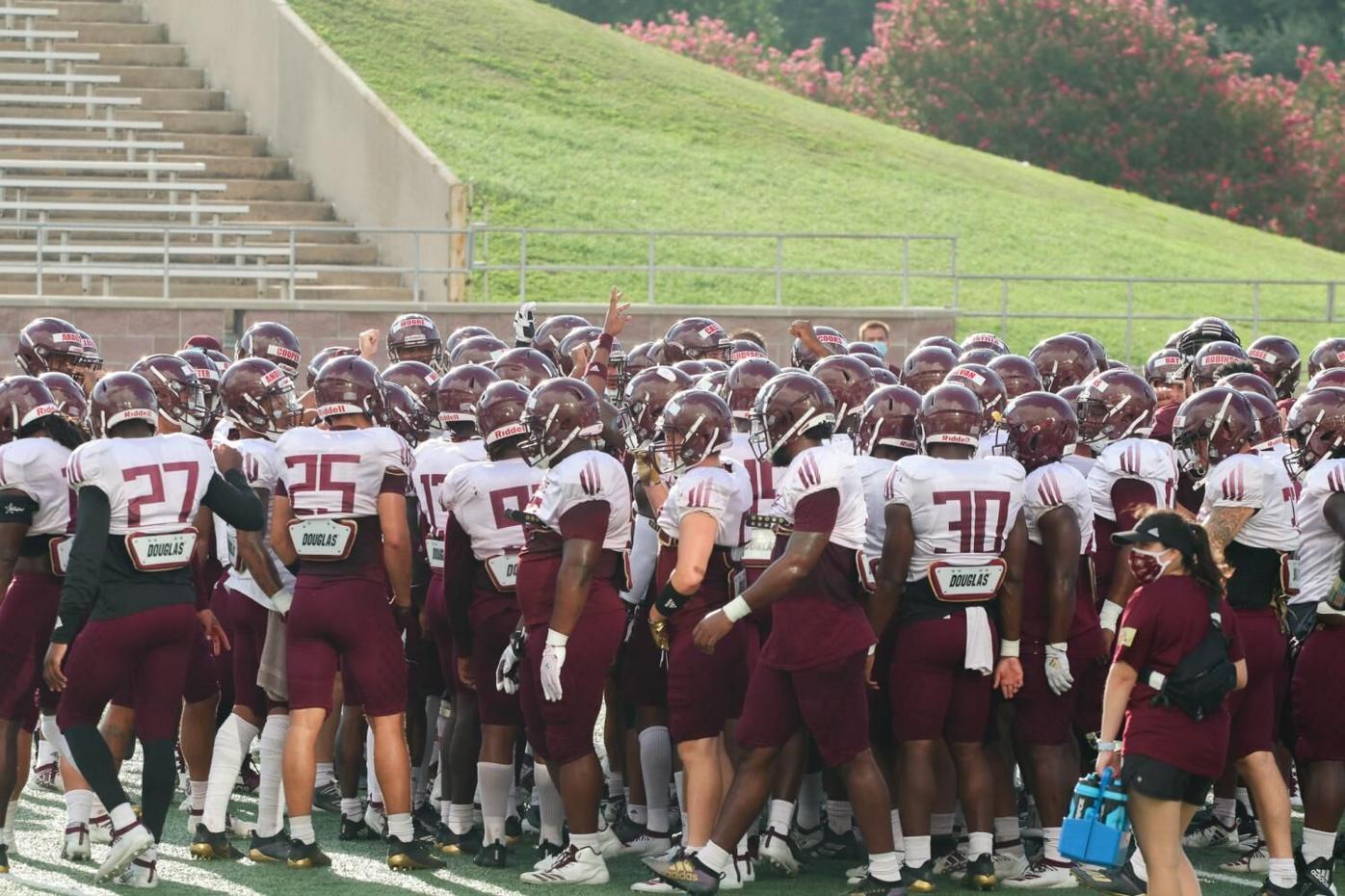 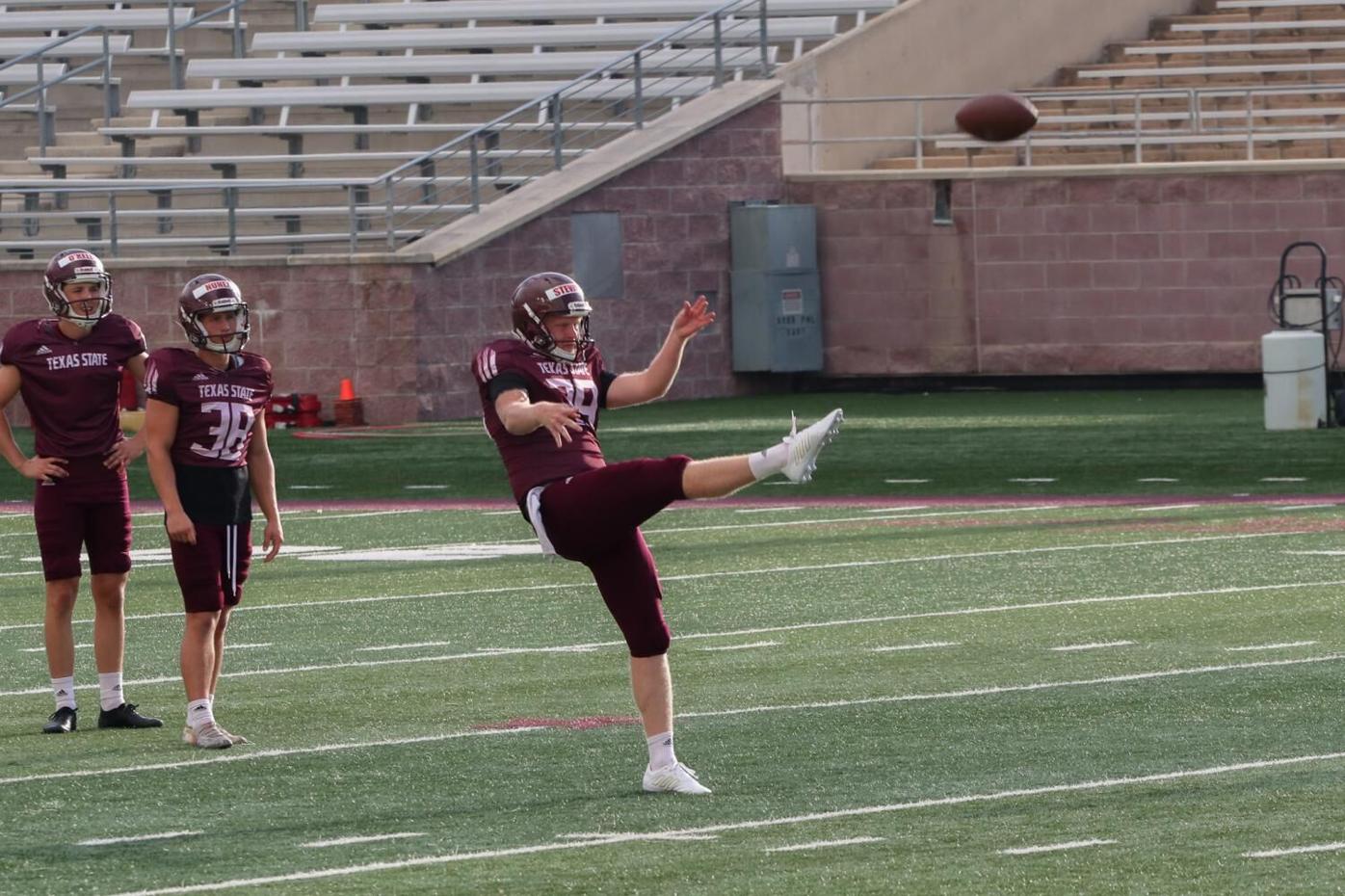 Sophomore punter Clayton Stewart practices his punting to a waiting teammate down the field during the Bobcats’ fall camp, Tuesday, August 11, 2020, at Bobcat Stadium.

Transfer sophomore quarterback Brady McBride passes the ball to a wide receiver in a drill during the Bobcats’ fall camp, Tuesday, August 11, 2020, at Bobcat Stadium.

The Bobcats’ defensive players huddle together and pump one another up before moving into the next section of practice, Tuesday, Aug. 11, 2020, at Bobcat Stadium

Junior tight end Kevin Howard catches the football before running down the field while in a practice drill during the Bobcats’ fall camp, Tuesday, August 11, 2020, at Bobcat Stadium

Defensive players for the Bobcats run through drills in pairs at team practice, Tuesday, August 11, 2020, at Bobcat Stadium

Sophomore punter Clayton Stewart practices his punting to a waiting teammate down the field during the Bobcats’ fall camp, Tuesday, August 11, 2020, at Bobcat Stadium.

Texas State football practices have made a comeback following the outbreak of COVID-19, and Head Coach Jake Spavital is working to prepare the team for what is slated to be an unpredictable season.

The practices, which officially began in mid-June with only a small group of players, are scheduled Monday through Wednesday, with walkthroughs on Thursday, game situations on Friday and a light workout on Sunday.

Amid numerous changes, Texas State is currently scheduled to open the season against Southern Methodist University Sept. 5 after its game against Ohio, originally scheduled for Aug. 29, was canceled.

While the Bobcats are eager to get back to play, with new procedures and safety measures in place, Spavital says the team will need to make a concerted effort to minimize the risk of infection both at home and on the field.

“At the end of [practice], we are still broken down on making sure that everybody knows what is at risk,” Spavital said. “We need to test clean and make sure that we are doing the right things and not spreading the virus or anything of that nature, and I think our kids feel very safe and comfortable here at Texas State.”

In June, five players tested positive for COVID-19 after contracting the virus outside of football activities. It was concluded that none of the individuals transmitted the virus to other teammates or staff members. Several other players have been sent home after displaying symptoms, but all tested negative.

Despite the circumstances, Spavital and his staff still want to ensure the players are having fun. A rigorous workout was originally planned for the Aug. 11 practice; however, the coaching staff decided to scrimmage for most of the practice instead to bring back some joy and competitiveness.

“[The coaching staff] got together and thought it would be in the best interest for the team to get a little more energy out there instead of just them reading Twitter and reading the uncertainty with the college football season,” Spavital said. “They could go out there and have some fun.”

The scrimmages also serve as a way to build team chemistry with in-game scenarios. That chemistry was one of Spavital’s primary concerns going into his second year as head coach. With established players missing out on spring training and newcomers being thrust into new situations, he thought the team desperately needed to build camaraderie on the field to succeed.

“Just due to the times, everybody has to do their part, and I think that the continuity and the unity of the team is increasing on a daily basis,” Spavital said. “We still got a lot of time until we play, and we are trying to do a lot of team activities, certain situations and pair people up in different ways. But, that is something that I think separates teams is the continuity and how close they are, and we are putting [in] a lot of time making sure we can do it.”

As a result of not having the entire team together until Aug. 10, the team experienced some rough periods. Spavital says despite this, he was impressed with his quarterbacks, sophomore Brady McBride and junior Tyler Vitt.

“I put the kids in two-minute situations at the beginning, and I love how both the quarterbacks operated,” Spavital said. “They took it down and scored and won the game. That hasn’t happened here yet.”

The scrimmages were both physical and competitive. Throughout the practice, several minor scuffles broke out between players, one of which involved McBride. However, Spavital says he knows they were nothing personal and simply a display of passion for winning.

“I love watching that,” Spavital said. “There was a tip-ball interception and [McBride] ends up chasing him down and ends up getting in a scuffle in the end zone which you’ve never seen that happen. Most quarterbacks kind of shy away from that. It’s just all out of the competitive fire of the game.”