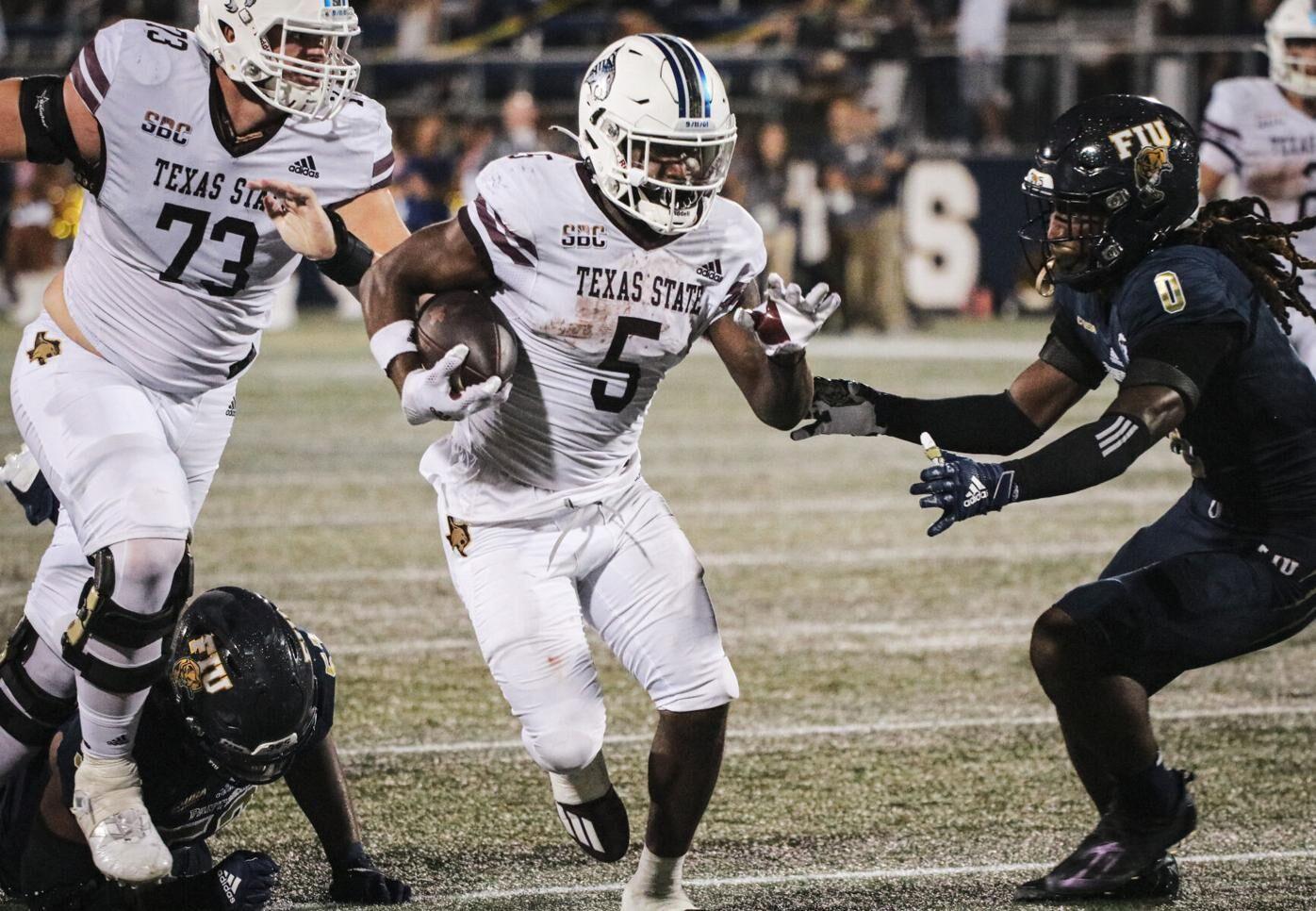 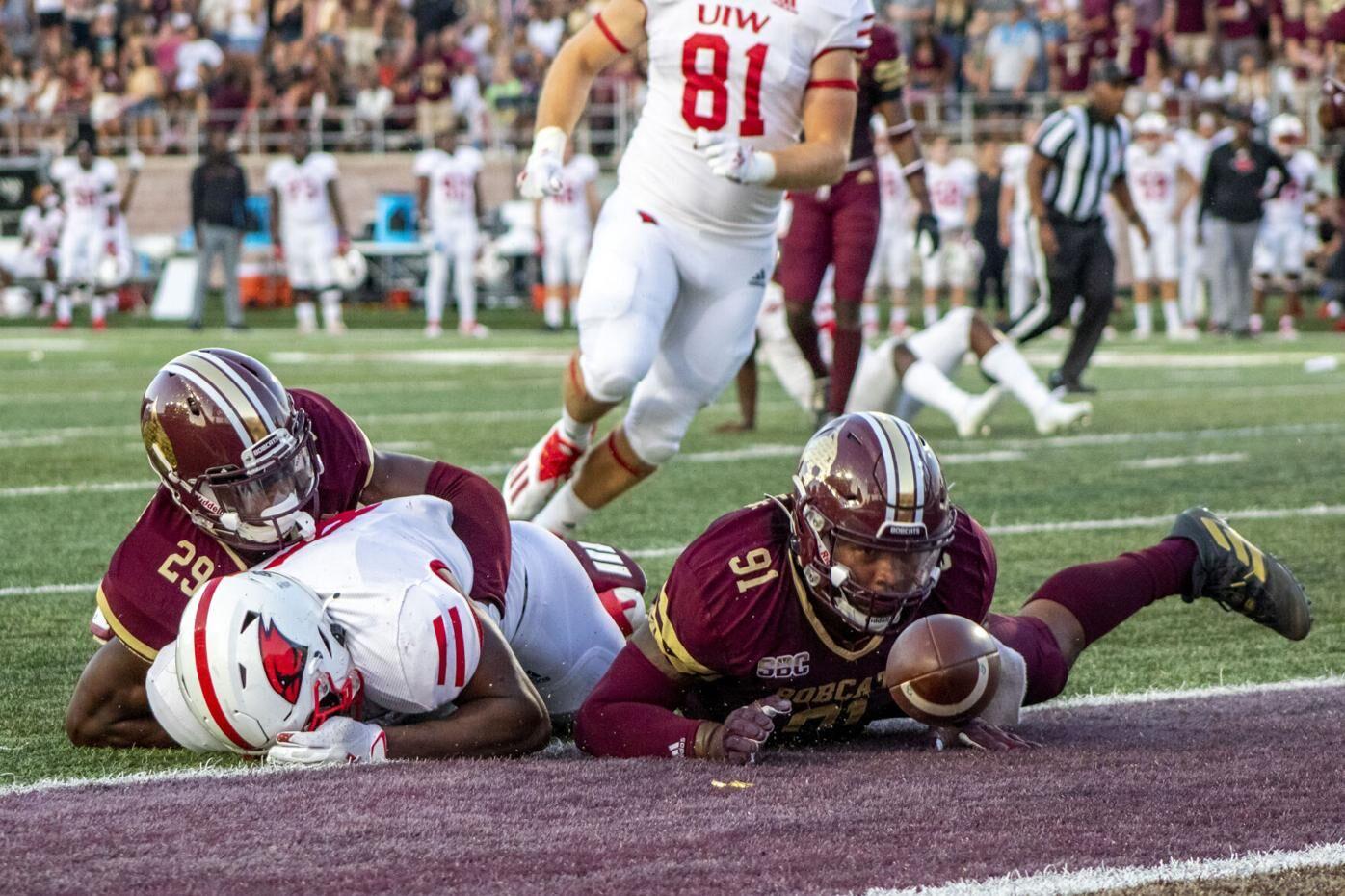 Texas State sophomore defensive lineman (91) eyes a loose ball after the Cardinals fumble at the goal-line, Saturday, Sept. 18, 2021, at Bobcat Stadium. The Bobcats lost to the University of the Incarnate Word 42-34. 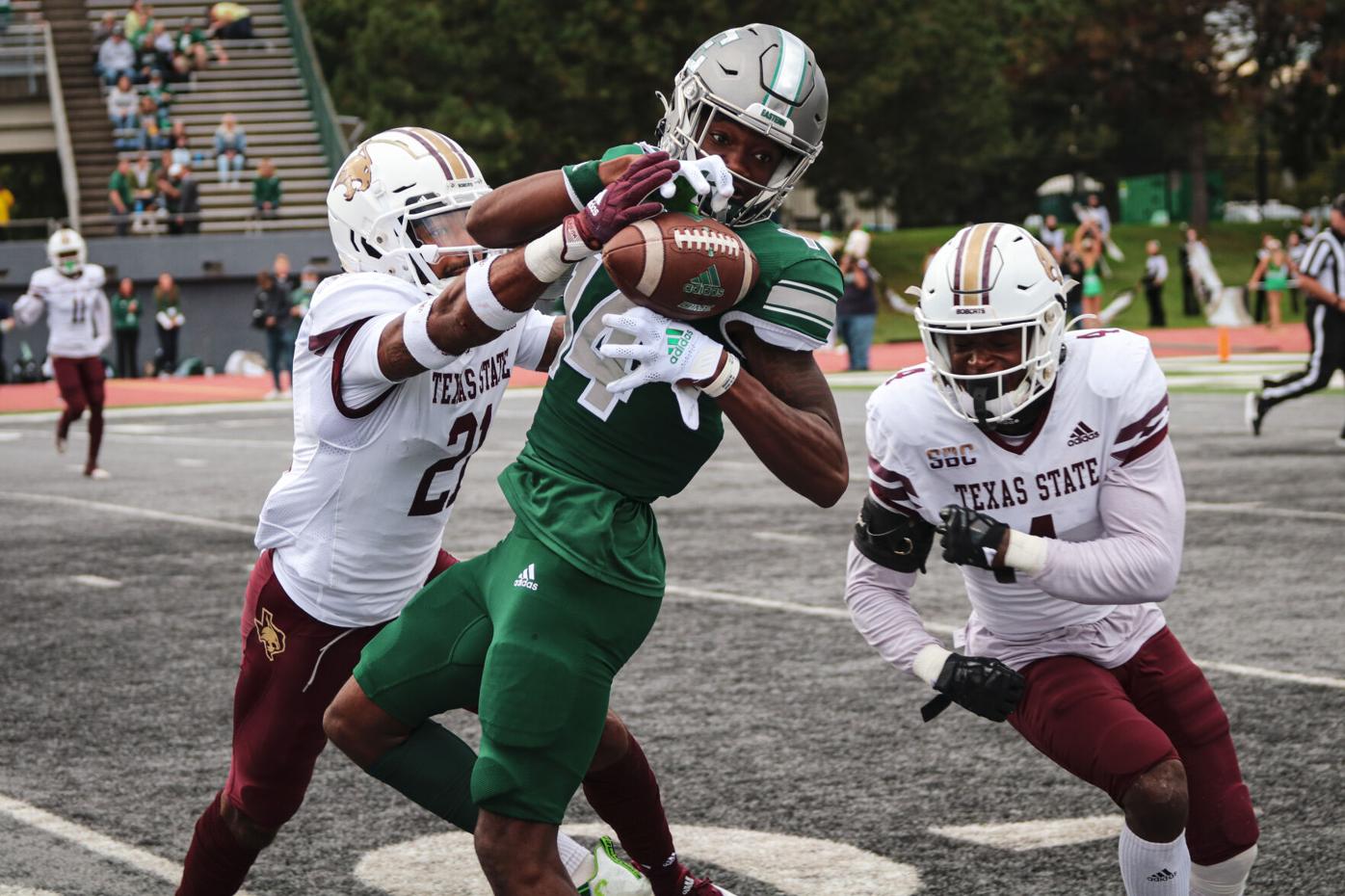 Four weeks into the season, Texas State Football’s 2021 campaign is reflecting the follies of past seasons.

With a 1-3 record thus far, the Bobcats’ underwhelming play echoes its 13-51 record since the start of the 2016 season. Their most recent losses came at the hands of the Incarnate Word Cardinals of the FCS 42-34 and a 59-21 blowout to the Eastern Michigan Eagles.

Now finishing a third of their season and coming off a bye week, the team hopes to right the ship as they set to start their conference schedule against the South Alabama Jaguars on Oct. 9.

The Bobcats have lacked firepower, particularly in the offensive line. Running the ball, they have totaled 545 net yards and five touchdowns but only average 3.6 yards per carry, putting most of the pressure on the passing game. Sophomore quarterback Brady McBride has 786 yards (79-137 ATT) with seven touchdowns and three interceptions on the season, but the porous offensive line play has allowed 11 sacks and 15 hurries.

Against Eastern Michigan, McBride went 16-25 for 187 yards and three touchdowns, however, he was sacked four times and hurried four times

“I thought [McBride] made some really good plays,” Head Coach Jake Spavital said in the post-game press conference. “We got to help him out … we have the ability to move and go and you see sometimes we’re an unbelievable offense … and then we look like we don’t know what we’re doing at times … I really think every single person is looking at what they can do better and how we can get the right product on the field.”

Defensively, Texas State prevented high-scoring contests in its first two games as they held the Baylor Bears, its only Power Five opponent, to 29 points and the Florida International Panthers to 17 points.

However, the Bobcats’ ability to defend against the run and pass has been unpredictable.

In their first game, the Bobcats allowed Baylor to beat them on run for 238 net yards while only letting up 148 passing yards. Against FIU, the Bobcats held their opponent to 3.7 yards per rush but let 259 yards through the air on 15.2 yards per completion.

They were stronger holding back the run against Incarnate Word, letting up 79 net rushing yards but were burned through the air with 376 yards. The unit folded against Eastern Michigan allowing 242 rushing yards and 257 passing yards. The most consistent piece of the Bobcats’ defense is their inability to pressure the opposing quarterback, as they only have four sacks on the year, three of which came from freshman linebacker Issiah Nixon.

Despite the play on the field, the Bobcats’ lack of depth in their roster, due to a mix of COVID-19 protocols and injuries, has hindered their performance prior to the starts of games. Before their game against Incarnate Word, 25 players were ruled out and 19 players were unavailable for their trip to Eastern Michigan. Spavital said a large number of absences has hurt the offensive and defensive line play the most, but it has also impacted the defense’s ability to tackle and the whole team’s ability to execute plays.

After the loss to the Eagles, Spavital was hopeful the bye week would help the team recover for the next game.

“We’re lacking in depth,” Spavital said. “We’re kind of very similar to where we were at last year. This bye week comes at a good time for us to get back to Texas to get healthy again and get our stinger back.”

The Bobcats will head home to start their conference schedule against the South Alabama Jaguars at 6 p.m. on Oct. 9 at Bobcat Stadium. The game will air on ESPN+.