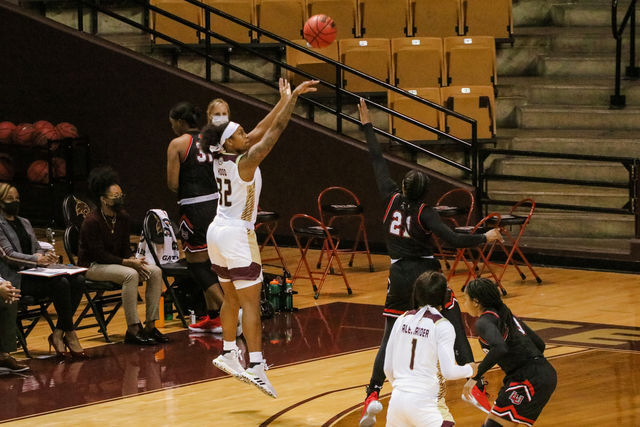 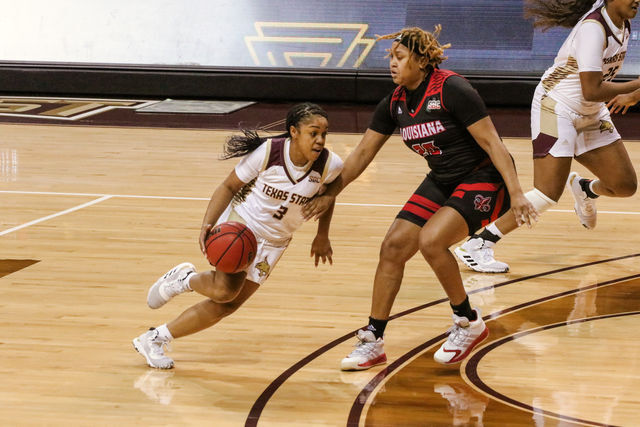 Texas State junior guard Kennedy Taylor (3) dribbles past a University of Louisiana defender to get to the basket, Friday, Jan. 1, 2021, at Strahan Arena.

Texas State junior guard Kennedy Taylor (3) dribbles past a University of Louisiana defender to get to the basket, Friday, Jan. 1, 2021, at Strahan Arena.

Da'Nasia Hood and Kennedy Taylor have taken the Sun Belt Conference by storm during the 2020-21 season. The two have established themselves as one of the best guard-forward duos among their peers and are hoping to lead the Bobcats deep into the conference tournament.

The pair arrived at Texas State in 2018 and have been roommates since they were freshmen living on campus. The time spent together off the court has allowed the pair to bond quickly and build chemistry.

“When you are roommates, you get comfortable and familiar with your social behaviors and for sure on the basketball floor. Kennedy being a great point guard, she has done a very good job being able to find those players to put the ball in the hole," Head Coach Zenarae Antoine says. "I think Da’Nasia now understands her role, and we need her to be able to score; she puts herself in a position for Kennedy to find her. As juniors now, they have done a really good job of playing off each other and understanding moves, mannerisms and what that looks like on the basketball floor. I think sometimes those intangibles are what you need in order to get you over the top.”

Hood is a true three-level scorer capable of getting a bucket from anywhere on the court. In some games, she dominates opposing players down low, rolling to the basket and hitting defenders with a series of post moves before laying the ball in. In others, she punishes players from the perimeter with her three-point scoring ability.

“Right now I am really trying to keep getting better at my defense," Hood says. "I’ve always been [an] offensive player, so working on my defense is something that I’ve really tried to do so I can take the matchups for the team — so I can be a player that can do everything."

Taylor is the primary ball-handler for the Bobcats — dangerous off the dribble, able to get into the lane and kick the ball out to Hood for open jump shots. She is also proficient at hitting Hood when she rolls to the rim or has a mismatch in the post.

“Being a point guard, you do have to lead the team and get everyone a shot," Taylor says. "I’d say I’m a pass-first point guard for whatever the best option is. I do love assists, which I kind of have to [in order] to get the team going, but I do like both [assists and scoring myself].”

While Taylor and Hood both stand out with their play, vocally they tend to be more reserved. Hood says she and Taylor try to motivate and lead the team with their actions.

"Both of us are not the most verbal and that is something we are working on this year, but it’s not just the two of us," Hood says. "We have a lot more players on the team [who] help us out. If we are ever not talking, it is just a reminder [that we have] so many people able to lead on the team. So we really just try to set the example for the team.”

Chasing a conference title alone is hard enough, but this year there is the added struggle of the COVID-19 pandemic. Teams have been forced to make sacrifices to keep themselves, their teammates and other teams safe throughout the season.

Coaches have asked their players not to travel to see their families for the holidays. Players have been asked to avoid hanging out with friends outside the team. The crowds that once cheered them on to victory are now a shadow of what they once were.

“[COVID-19] is tough, but every day we preach that we have a great opportunity in front of us," Taylor says. "Everyone in the country is going through it, so we aren’t the only ones. We know we want to win a championship, so slacking and using excuses about COVID is not going to get us the championship we want.”