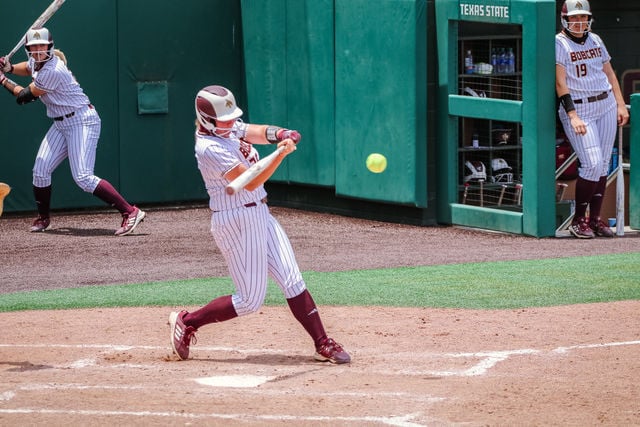 Texas State sophomore infielder Sara Vanderford (26) hits a home run during the game against the University of Texas at Arlington, Saturday, May 8, 2021, at Bobcat Softball Stadium. The Bobcats won 4-2. 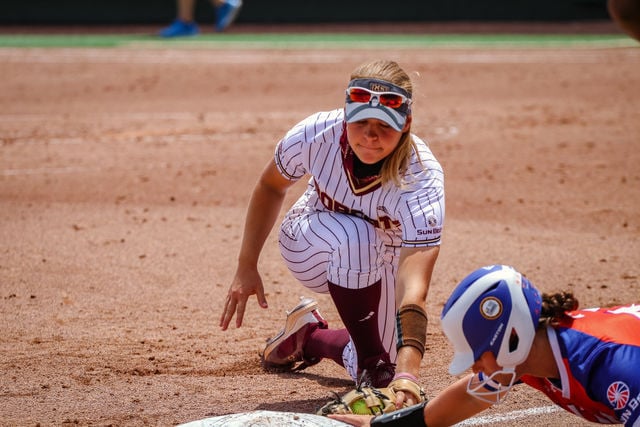 Texas State senior infielder Tara Oltmann (22) tags a Maverick that reaches for third base, Saturday, May 8, 2021, at Bobcat Softball Stadium. The Bobcats won 4-2. 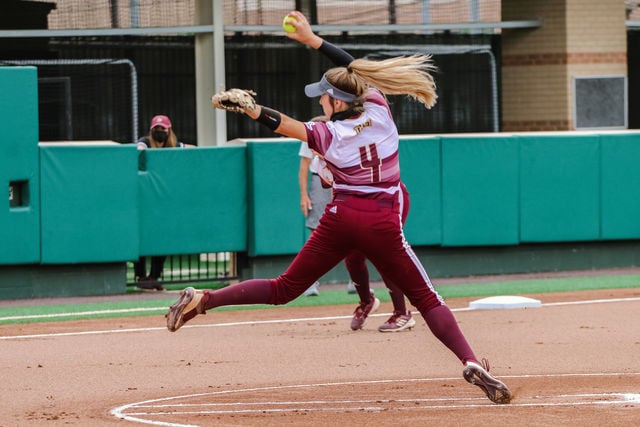 Texas State freshman pitcher Jessica Mullins (4) winds up to pitch to the player at bat during the game against Houston Baptist, Wednesday, April 28, 2021, at Bobcat Softball Stadium. The Bobcats won 4-2.

This past season, Texas State softball was stalled by 345 days. With a global pandemic and local winter storm, the team was temporarily kept off the field yet they managed to wrap up the season with a 39-14 overall record, a historic win streak, a program record of 25-home victories and a birth in the NCAA Regionals.

Even with their setbacks, the Bobcats were able to play their full season. However, they had not expected to compete in so many games, always awaiting a cancellation due to rises in the number of COVID-19 cases. To combat this, sophomore infielder Sara Vanderford says the team focused on staying healthy throughout the season, one game at a time.

“You reach a certain point when you just start rolling with it,” Vanderford says. “It becomes a routine, and, at the end, you look back, and you’re like, ‘Oh my gosh. We played over 50 games,’ but, in the moment, it doesn’t feel like that. Especially with COVID...somebody can test positive, you can get shut down for two weeks. The fact that we were able to do it shows that we were all doing what we could to stay COVID-free.”

Even with the team's drive for safety, Texas State softball's precautions gave senior infielder Tara Oltmann anxiety when outside of practice, as she was always conscious of where she was going and who she was around.

“You definitely had to sort of like think about what you’re doing before you went and do it,” Oltmann says. “I was always paranoid or worried that I was gonna get [COVID-19], but I think it has made you appreciate the game a little bit more.”

Another side effect of the rigid safety precautions was a lack of team bonding. When COVID-19 restrictions were in full effect, the team couldn't go out to eat at restaurants or hang out together in the same way teams had in the past. Often, the team’s largest social gatherings were bus rides to away games.

“That’s where you get to know people a little bit better, outside of softball,” Oltmann says. “When you’re on the softball field, I guess there is some small talk, but you’re mainly focused on working on your skills and on the game, competing. When you’re on the bus, it’s kind of like regular talking to your friends...and getting to know them on a more personal level.”

The team carried those connections and used them to drive 18 straight victories, tying the school record for the longest single-season win streak. In that span, the Bobcats beat their opponents by a combined run total of 107-32.

Regardless of the team's dominance, Head Coach Ricci Woodard says the feat “was not easy," as Texas State beat tough opponents like the then No. 25 ranked Texas A&M University 7-6.

“When you get in those grooves, it fuels you,” Woodard says. “If you can keep it for a long time during the season, you’re doing something right. This was a fun group to work with. They worked hard at it. They did a lot of things right during that timeframe to put them in that spot. It was the reason they were able to enjoy it.”

The Bobcats' streak as they suffered a 3-1 loss in April to the University of South Alabama. This was the start of a slump for the team as it lost six of its next eight games.

Vanderford, who wanted to sport some championship hardware, was particularly disappointed by the tournament elimination, but both she and Oltmann were named to the Sun Belt All-Tournament Team.

Even out of the Sun Belt Conference Championships, the Bobcats were not done, making it to the NCAA Regionals the following week. They managed to grab a 5-1 upset over the No. 10 University of Oregon but were knocked out the following day after suffering two shutout losses to the University of Texas and a rematch with Oregon.

With the season at a close, the Bobcats say goodbye to six seniors, including Oltmann, who looks back at her recruitment with gratitude for her time on the team.

“They took a chance on me whenever I was teeny-tiny,” Oltmann says. “I hadn’t even hit my growth spurt until after I committed...I would not be the person I am today without coming here...I just really appreciate being able to be a part of this team for the last four years.”

Looking ahead into next season, Woodard has begun focusing her sights on the team's next steps, despite the loss of senior star talent.

“This is a group that’s going to be really hard to replace, not only for what they did on the field, but who they were off the field,” Woodard says. “It’s just a great group of young ladies. The legacy that they’ve left at Texas State is going to be really hard to replace, but that’s what our job is: to keep building and replacing and moving forward to the next year...It’s not like you take a break from this job. You start rebuilding the next day, so we’re looking for the pieces to the puzzle for next year.”