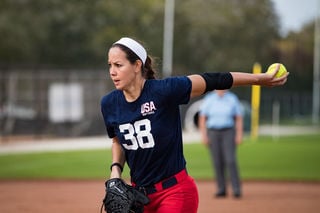 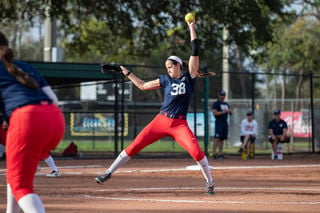 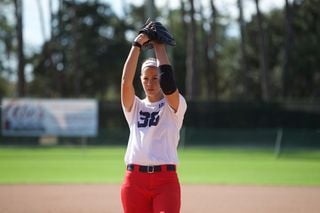 Cat Osterman preps to throw from the moundPhoto courtesy of USA Softball. Photo by Jade Hewitt

Texas State’s assistant softball coach Cat Osterman is gearing up for the 2020 Tokyo Olympic games after making the women’s national team this month.

In a 2015 Sports Illustrated interview after her last game in the National Pro Fastpitch league for the USSSA Pride, Osterman said that winning the 2004 gold medal in Athens was the pinnacle of her career.

Osterman, the four-time collegiate All American and two-time Olympic medalist is back in the saddle after her 2015 retirement and joins Monica Abbott as the only other Olympic medalist on the team.

Coach of the national softball team, Ken Eriksen said this year’s team trials were extremely competitive and a large pool of talent.

“The amount of great players (present) showed that the future of USA softball is strong,” Eriksen said. “It was really exciting to see Cat Osterman attend and perform at a very high level.”

Tryouts took place the first week of the new year in Clearwater, Florida where Osterman and company went through drills to prove themselves in live situations.

“It’s kind of nerve-wracking,” Osterman said. “I haven’t seen competitive hitters in almost three years, but it’s nice to be back. I enjoyed my time out there and getting to know the new athletes who are going to be my teammates.”

Nerves, however, did not seem to rattle Osterman, as she was named to the final roster with a spot for the team’s trip to Lima, Peru for the Pan American games July 28 to Aug 10.

“I was extremely nervous. I hadn’t played competitive softball in…over 1,200 days,” Osterman said. “So, I mean, I hadn’t been on a mound facing a hitter with something to prove in a long time. The first day I had to throw in a scrimmage towards the end. I was fine until it got to the halfway point and I knew I was coming up. I don’t know if I’ve ever been as nervous (as I was) in my life. I felt like I was ready to puke almost, just from the nerves…”

Other than nerves, Osterman said the most difficult part of her comeback has been the training, considering she does not have any teammates to help make the workouts more enjoyable.

“All of my training is, essentially, on my own,” Osterman said. “I have to fit time into our schedule. I have the use of our athletic trainer and our strength coach. Which is great because Lance Sewell was my strength coach when I was finishing up playing pro ball. It’s nice to have a familiar face here to help me in the process.”

It’s not just Osterman who is making a comeback, both Olympic softball and baseball return to the schedule of events after a long absence from the games. The last time either sport was played in the Olympic games was 2008. The International Olympic Committee allows the host country a chance to add sports to the program for that year’s games. Tokyo chose to make the addition of the sports after the landmark success and popularity the sports have had in Japan.

Coming back onto the international scene is no easy task. Like all great athletes, what sets Osterman apart is her work ethic and drive. The same thing fueling her comeback is what separated Osterman from other pitchers while she was still pitching for the University of Texas at Austin.

“It’s a lot of self-motivation—that’s the hard part,” Osterman said. “It’s days where you might feel like you don’t want to, it’s not like you have teammates that you’re meeting at the gym. You really have to motivate yourself to get up and go.”

Osterman said being a Bobcat and continuing her work with the softball team at Texas State helps her stay on top of her game.

“I’m proud to be a Bobcat,” Osterman said. “I get to train here, so… a big part of the process for me is the fact that Texas State will give me the ability to be at the top of my game when summer comes, and I get to put on the red, white and blue again.”

The San Marcos Police Department responded to an incident downtown Oct. 27, resulting in the arrests of two men.

The Hays County Health Department reports 13 new lab-confirmed cases of COVID-19 and 37 recoveries Oct. 30, bringing the total number of cases in the county to 6,132 and recoveries to 5,722. The total active cases in the last 21 days is 393.

The Hays County Sheriff's Office's investigation into possible illicit activity at a San Marcos spa led to an arrest made Oct. 29. for Trafficking of Persons.