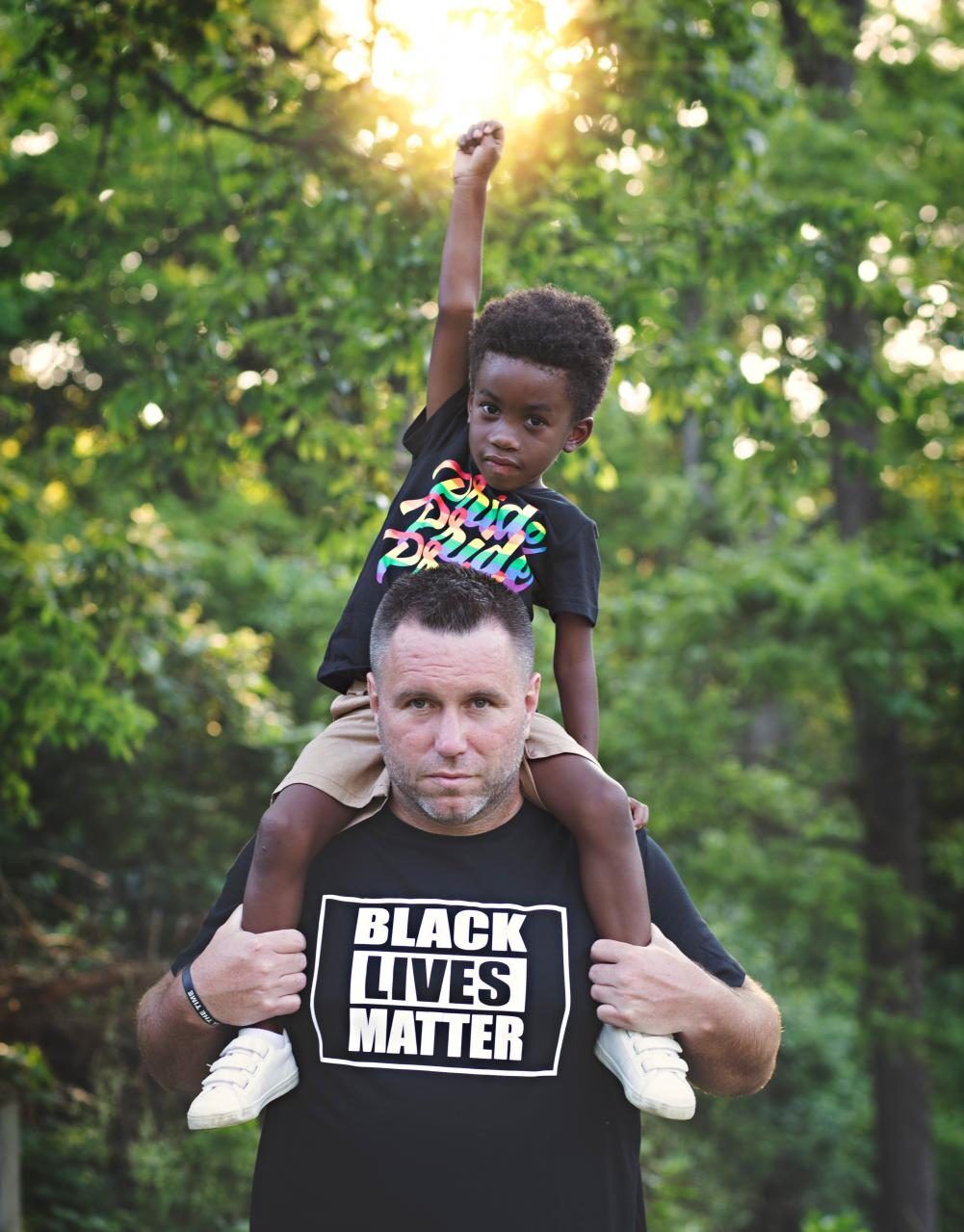 Volleyball Head Coach Sean Huiet poses for a photo with his adopted son, Declan, with a Black Lives Matter t-shirt on. 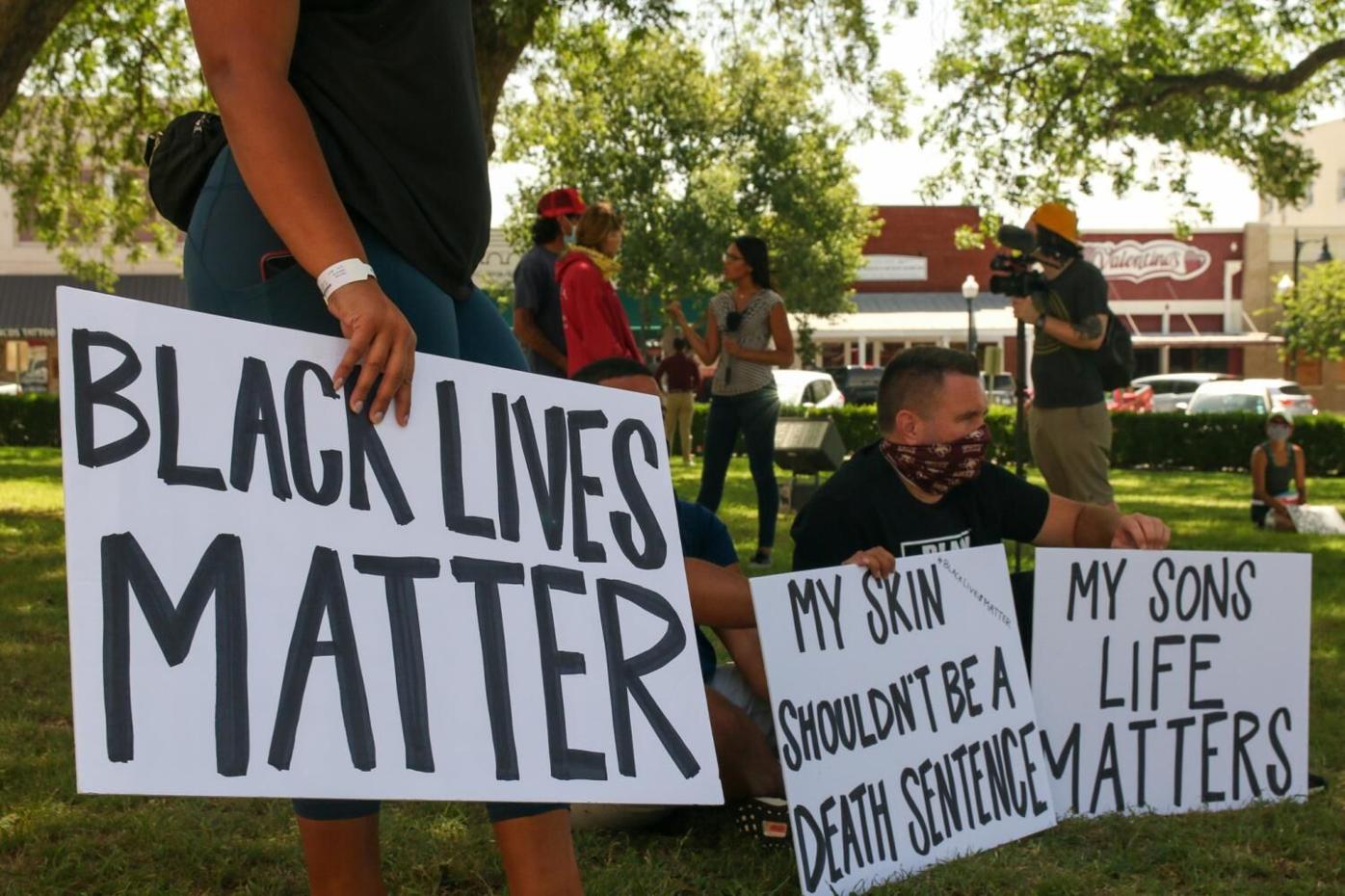 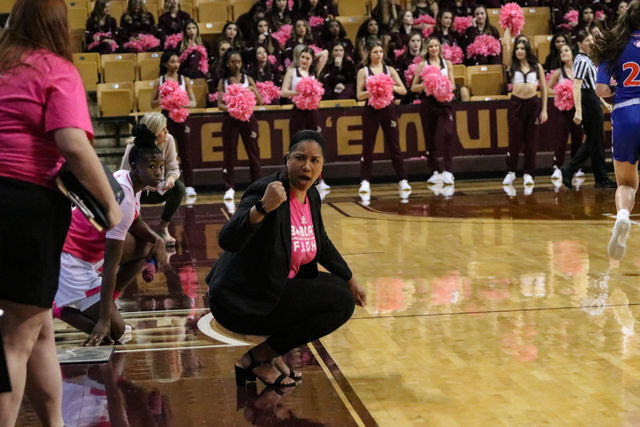 Texas State women’s basketball Head Coach Zenarae Antoine talks to Bobcat players on the sideline after a successful play during a pink out game against the University of Texas at Arlington, Saturday, Feb. 1, 2020, at Strahan Arena. (Kate Connors)

The names Ahmaud Arbery, George Floyd, Breonna Taylor and countless others have become well-known over the last several months due to the reality that Black lives have not always mattered to society.

Throughout a summer filled with protests against systemic racism, some Texas State coaches have placed an emphasis on addressing inequality, with some taking part in marches and public protests and others having conversations about it with their respective teams.

Volleyball Head Coach Sean Huiet, who has an adopted Black son, attended several demonstrations against racism, including some in San Marcos. Huiet wanted to make sure his team knew he stood with them and that they were being heard.

“My sign just said ‘my son’s life matters,’” Huiet said. “It just was a way for me to hopefully let my team and let people at Texas State know that this is who I am, and this is how my program is going to be run. Equality for everyone; I want everyone to have a voice and be heard and be seen and know that their opinions matter.”

Huiet says he made it a priority to talk to his players about police brutality and creating change, highlighting the importance of the team taking initiative. It is part of a coach’s job to help ensure these things are addressed within the team, but ultimately the players help turn words into action.

“I don’t necessarily want to be the [only] driving force behind all of this,” Hueit said. “If [they] know of something, if [they] have a book we could read, if [they] have a speaker [who] would be awesome to listen to, I really want some ideas from [them] so [they] can help educate.

Women’s basketball Head Coach Zenarae Antoine, known as “Coach Z,” has great confidence in millennials and Generation Z and believes they have the potential to make great societal changes.

“Unless you work in a college setting and you work directly with students, you don’t really understand this particular generation in that they are wanting to know, grow [and] learn,” Antoine said. “They may seem dismissive and a little superficial at times, but if there is one thing for sure: There is a passion there that is different than the generation before them. That is one of equality, and that is a passion for wanting to understand and really loving their neighbor.”

Antoine thinks the next step for the younger generations is voting; she makes a concerted effort to educate her players on issues affecting them. While Antoine thinks young people have the tools to change the world, she thinks they are lacking the necessary political education to do so.

“[Young people are] protesting, communicating, talking, putting people in check here and there and then saying, ‘We are going to get out, we’re going to vote, we’re gonna get people registered to vote,'” Antoine said. “So the next piece is educating the voters.”

According to Women’s Golf Head Coach Par Nilsson, the team witnessed racism first-hand when COVID-19 began to spread across the U.S. He says Asian players on the team received discriminatory comments on airplanes, during tournaments and in restaurants.

Occurrences like such are demoralizing, giving Nilsson more reason to preach acceptance to his players. He believes diversity on any team is a major strength because it pushes players and coaches to become more open-minded.

“[Racism is] obviously a really complicated subject, but I think it’s really good to talk about it and to learn about it and to keep [educating] ourselves, our coaching staff and our players,” Nilsson said.

The conversations about racism, Nilsson believes, are important in developing team and staff members into better and more aware individuals.

Racial injustice is nothing new. Former men’s basketball Head Coach Danny Kaspar was accused in June of making racist comments to several former players and resigned Sept. 22. The results of the investigation into the allegations are unknown as of now, but since, many of Kaspar’s former players have come out both in support of him and against him. The allegations alerted some in the university community about the feelings of Black athletes beyond the number of points scored in a game.

Soccer Head Coach Kat Conner says today’s conversations about race have a different feeling to them. She has also had to work hard at becoming more knowledgable and aware.

Conner acknowledges that her beliefs about race have evolved. She says she previously referred to herself as “color-blind” but now recognizes that doing so can be problematic. Instead of ignoring people’s skin color, Conner says society should embrace differences in a positive way.

“I like what I heard Ursula Burns, one of the first CEO Black women, say, ‘We need to be color brave,’” Conner said. “I think that is a huge start because when we say we need to be color brave that means we should be actually noticing the differences between each other [and listening] to each other and [and learning] from each other’s plights [and] struggles so that we may help in the injustice.”

Sports have always reflected the culture of the times. Athletes of the present and past have used their platforms to push for justice. On Aug. 26, several NBA basketball teams boycotted scheduled playoff games in light of Jacob Blake being shot in Wisconsin seven times by police, leaving him paralyzed, according to his family. Other leagues, like the WNBA, also boycotted scheduled games and practices.

During the 1960s, athletes like Muhammad Ali pushed for equal rights. Now, athletes like LeBron James and Nneka Ogwumike have taken on that responsibility.

While the platforms of college athletes may not be as big as professional athletes, they still wield some influence that can help shape society and serve as an example for younger generations to come. It is the coaches’ responsibility to help them realize that power.

“You don’t really realize how big of an impact you have in a sport until you are at an event and these little kids run up and ask for your autograph, or you know this group wants to come and meet your team,” Huiet said. “[Sports are] a way to maybe bring people together and show how we can be equal and how we can treat everyone with respect and fairness.”

Coming off a brutal 38-point defeat against Brigham Young University, Head Coach Jake Spavital and his Texas State Bobcats will look to rebound on Homecoming night with a win against the University of Louisiana at Lafayette Ragin’ Cajuns.

Texas State cross country will wrap up its season with a final test at the Sun Belt Conference Championship Meet on Oct. 31 in Mobile, Alabama.

Texas State volleyball (14-1 overall, 9-0 Sun Belt) will play the University of Texas at Arlington (8-1 overall and Sun Belt) in a double-header matchup Oct. 30-31 in Arlington, Texas.

As tumbleweeds rolled down LBJ Drive and students sat in their homes for the latter half of the 2020 spring semester, alumna Allison Price, a directing graduate, looked for a way to continue her creative journey in a new reality.