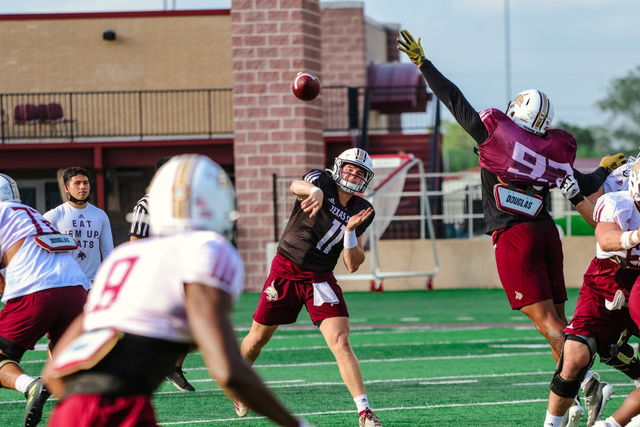 Junior quarterback Tyler Vitt (11) throws the ball through defenders to a waiting receiver upfield during a practice drill Tuesday, Oct. 20, 2020, at Bobcat Stadium. 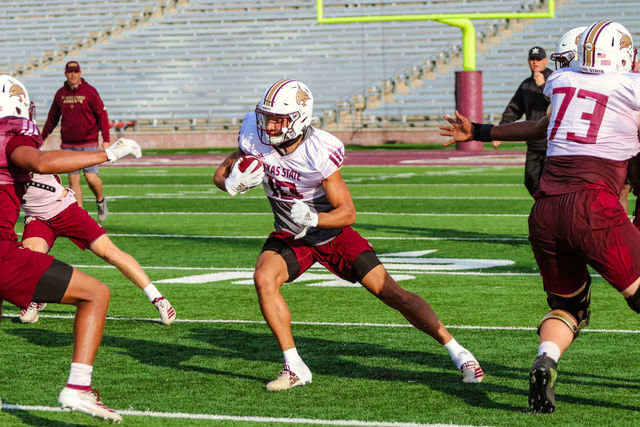 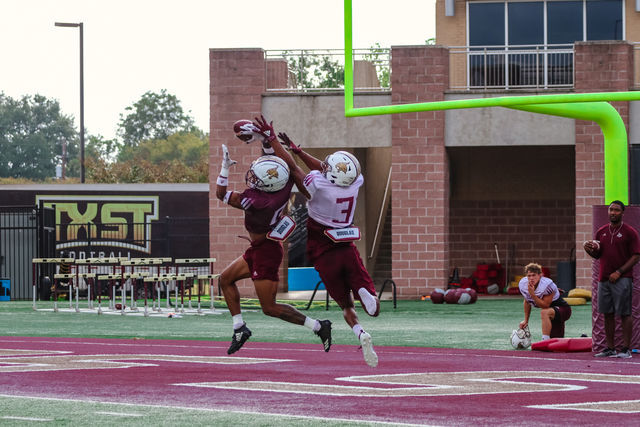 Junior quarterback Tyler Vitt (11) throws the ball through defenders to a waiting receiver upfield during a practice drill Tuesday, Oct. 20, 2020, at Bobcat Stadium.

The Bobcats are the heavy underdogs going into this game and will look to their defense to stop the high powered BYU offense, ranked sixth in the country, to pull off the upset.

Texas State Head Coach Jake Spavital thinks the team is up to the challenge but acknowledges that the team needs to improve.

"We're at a halfway point of the season and we have to continue getting better..." Spavital said. "These kids are going to come out tomorrow, hook it up, get another practice to get better, and then we'll go out there and take our shot at BYU."

The Cougar offense is led by Heisman hopeful junior quarterback Zach Wilson, averaging 328.7 passing yards per game this season. Spavital has given Wilson high-praises in the lead up to the game.

"[Wilson] is one of the most elite guys out there right now, and can be compared to the likes of Trevor Lawerance, he can definitely be in the category," Spavital said. "He can do anything from the pro-style play to the spread; there's a pretty wide range of styles they can do with him."

BYU's junior wide receiver Dax Milne is someone the Bobcat defense has to keep an eye on this week. Milne is coming off 184 receiving yards and three touchdowns in a win against the University of Houston.

BYU is not only known for its high scoring offense but also for its stellar defense, ranking eighth in scoring defense. The Cougars have only allowed a mere 70 total points through five games.

Texas State sophomore tight end Jackson Lanam believes the team needs to work as a unit to successfully knock off BYU. He says they need to have laser focus, despite recent losses.

"Just mindset, all about mindset," Lanam said. "We can beat anyone we want to. All that matters is your mindset, staying locked in even once you lose."

The Texas State running game has been churning led by the running back triad freshman Calvin Hill, sophomore Brock Sturges and sophomore Jahmyl Jeter, who average 5.4 yards per carry as a group.

The Bobcat defense can prove themselves during this game if they are able to contain BYU's receivers and shut down the passing game.

The Bobcats are coming off a hard-fought 30-20 loss on the road to South Alabama. The Bobcats kept it close to the end but their 'bend but don't break' defense was not enough to hold off the Jaguars in the fourth quarter.

"The effort, energy and emotion were there, we were in position to win the football game, but I can sleep better knowing they put everything out there on the line," Spavital said.

The Bobcats are hopeful they have what it takes to bounce back and pull the upset off in this week's matchup.